Butte-Silver Bow Health Officer Karen Sullivan speaks in front of the health department building September 10 at a memorial for the county residents who lost their lives to COVID-19. 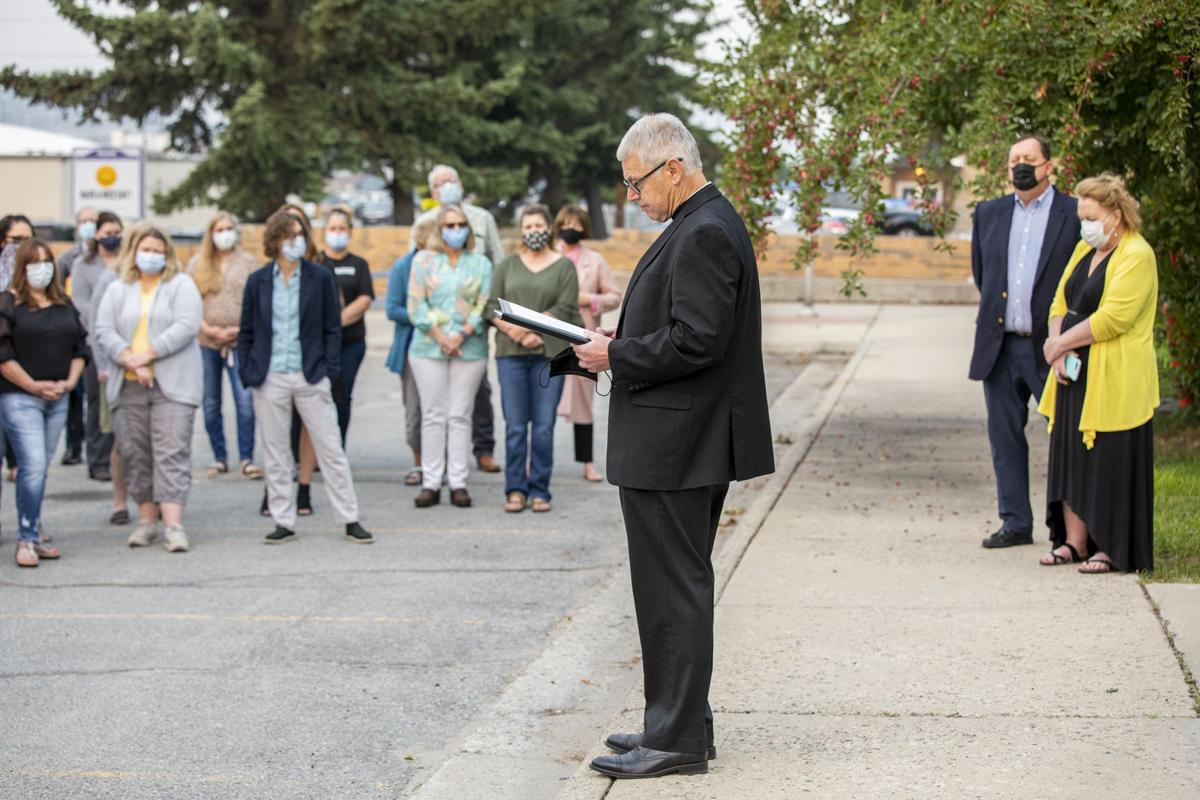 Father Patrick Beretta speaks Thursday at the memorial for the 90 Butte-Silver Bow residents who died from COVID-19. 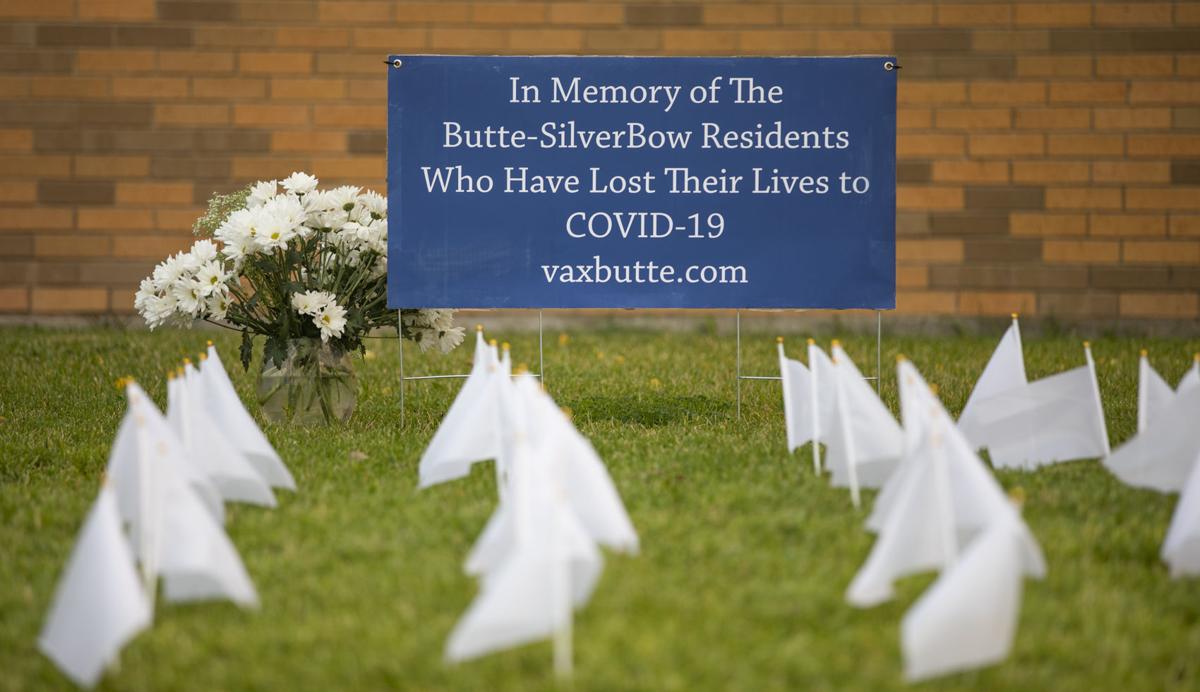 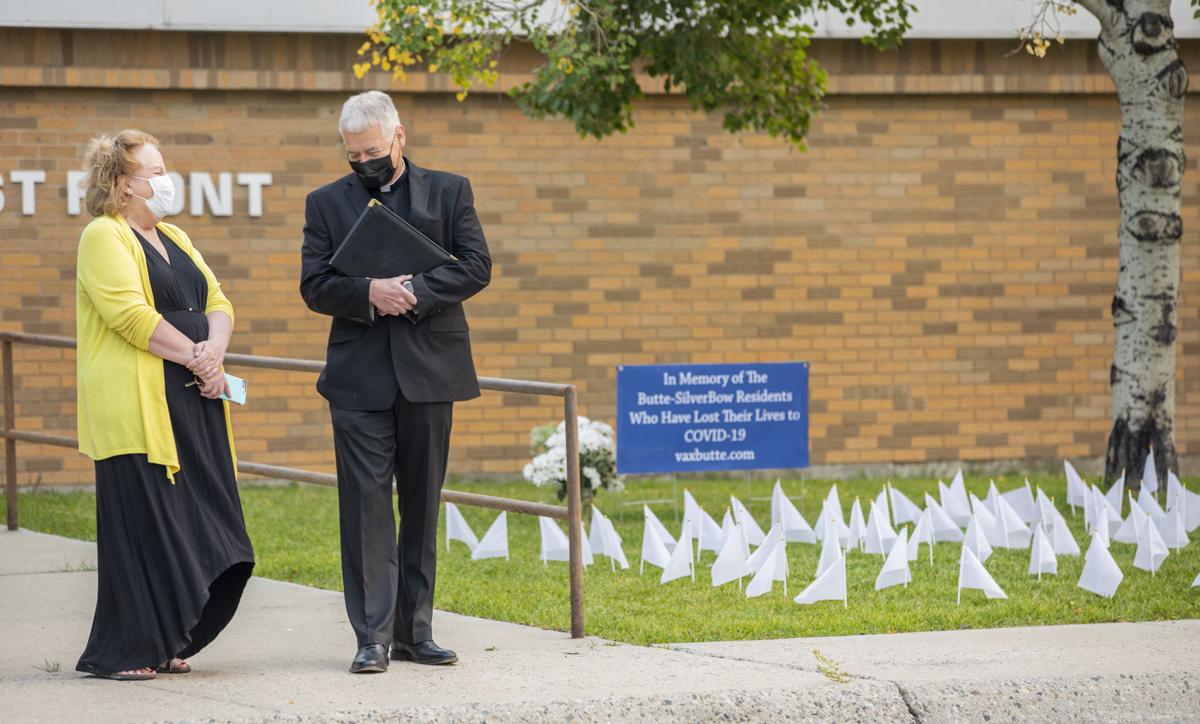 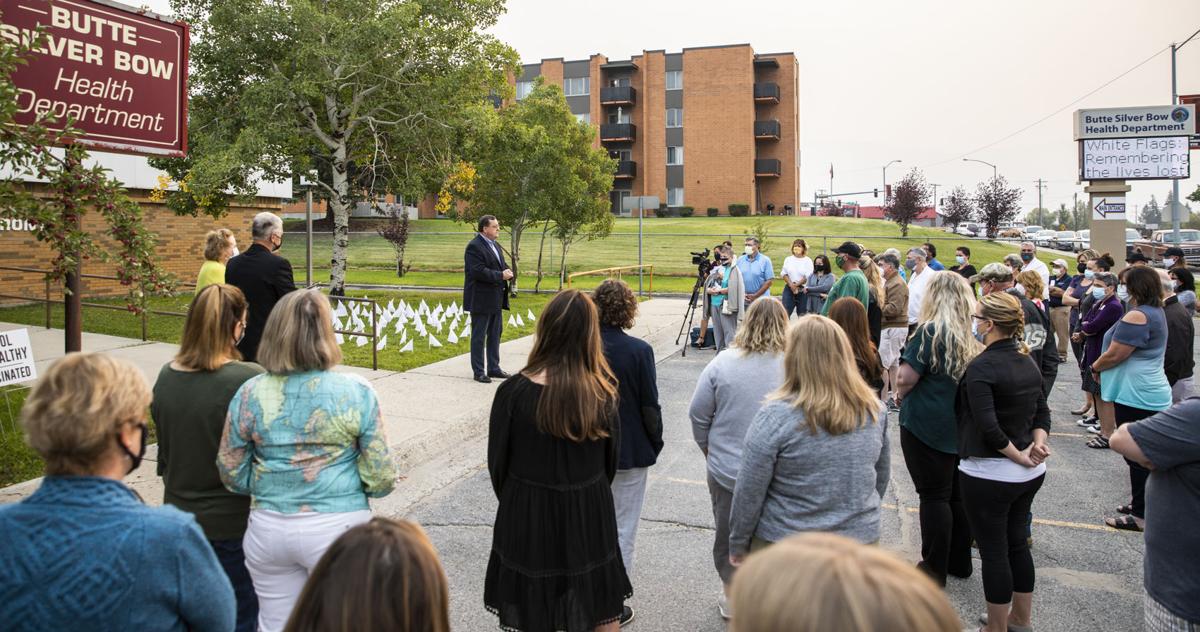 Father Patrick Beretta leads loved ones and others in prayer and remembrance during a memorial for the 90 Butte-Silver Bow residents who died from COVID-19.

Rows of white flags on the Butte-Silver Bow Health Department lawn memorialize the 90 people who died from COVID-19 in the county.

Thursday morning, Catholic parish priest Father Patrick Beretta spoke before those who lost loved ones to the pandemic as they bowed their heads in remembrance.

“As the battle against COVID continues, today’s memorial introduces the first steps in the critical process of healing,” Beretta said. “Human beings heal hurt not by forgetting — we heal by remembering.”

Eyes filled with tears as those in attendance stretched their hands outward in prayer. The memorial was for some the first chance to gather and celebrate the lives of those they lost with others.

Rob Smith lost his mother, Lorraine Smith, to COVID-19 two days before this past Christmas. Lorraine, 91, died in an assisted living facility in Butte.

Lorraine passed when the county was in lockdown and gatherings were unsafe, in the midst of the winter surge that took most of the lives represented by the white flags.

Rob and his wife, Mary Ann Smith, finally found closure that had evaded them before. Public recognition for the lives behind the statistics is important, they said.

“It was nice. It was really nice to have something,” Rob said of the memorial. “It means a lot, and brings awareness to those who didn’t have a way to be memorialized.”

Kathi Kreklow lost her father, Forest Kreklow, 89, the same day Rob lost his mother. Forest was among 18 residents to die during the horrific COVID outbreak at The Springs at Butte care home over the holidays.

Kathi praised the county’s leaders for putting on the event.

"It's a wonderful tribute to all the residents that we lost in Butte-Silver Bow," Kathi said.

“It gives hope. You can see that by the turnout,” she added.

Around 50 residents turned out for the memorial. Many were family members of those who died, and many were members from the health care community who desperately fought to keep people alive, and continue to do so.

“This community has a lot to be proud of with regard to their health care workers,” Kathi said.

Kathi was allowed to enter St. James Healthcare, fully suited up in personal protective equipment, to spend her father’s final hours with him.

She therefore shares a solemn kinship with many of those present at the memorial. Many of those assembled have seen the worst consequences of the pandemic with their own eyes, Beretta among them.

“I held the hands of these deceased and I spoke words of tenderness and affection at the time of their approaching deaths. I have observed many others do the same and so much better than I ever could,” Beretta said during his blessing.

He recognized the immense work of the health department and other county entities in the face of unprecedented challenges during the trying times, and the importance of vaccinations.

“God bless Butte, God bless the United States, and God bless everyone who’s got to beat this virus,” he said.

Health Officer Karen Sullivan had to pause to compose herself as she spoke to crowd.

"I know a lot of you who are here have lost deeply,” Sullivan said. “And we wanted this ceremony to note that. The health department feels this very deeply."

At the conclusion of the prayers and blessings, she passed on her wishes for those in attendance.

“I hope this event brings you peace,” she said. “It did for me.”

When Beretta approached Sullivan about the memorial, the health department was, as always, in the midst of the never-ending COVID response. Members of the department have had their heads down for a year and a half, tallying the statistics of the tragedy, contact tracing, combating misinformation, and vaccinating the willing — with little time to pause and look back.

“We've been so busy that we haven't had time to slow down and truly focus on the tragedy of all of this,” she said.

That’s because the tragedy is ongoing. The official death count may soon rise to 94.

“We are in the process of gathering and reviewing the death records of four Butte-Silver Bow residents to determine if COVID-19 was the cause of death. The deaths occurred within the past month,” Sullivan told The Montana Standard on Thursday following the memorial.

Four COVID-related deaths were reported in August, the first virus deaths in the county since March. In 2020, the surge started at the end of October. Now, with the Delta variant, breakthrough cases, and a sizable portion of the community choosing not to be vaccinated, the signs of serious trouble are fast emerging in the statistics.

In Butte-Silver Bow, 77% of hospital beds were occupied as of Monday, according to the Montana Department of Public Health and Human Services most recent report.

On Thursday, 10 people were hospitalized with COVID-19 at St. James Healthcare. Seven were residents of Butte-Silver Bow. Five of those 10 individuals were in the hospital's intensive care unit, with three of those patients on ventilators.

A total of 1,001 new cases were added Wednesday in Montana.

The numbers paint a distressing picture, and nearly 40% of eligible residents remain unvaccinated in the county.

Vaccinations are proven to dramatically reduce the chance of getting the virus as well as the chance of hospitalization and death for those who do get the virus, according to the Centers for Disease Control and Prevention. The statistics from the state, county and nation tell the same story.

By getting vaccinated, a person also reduces the likelihood he or she will spread the virus to others.

Kathi came to the ceremony to remember her father and the other lives lost, but said the event also served as a powerful reminder of where we are today.

“It’s not over yet,” she said, with tears in her eyes. "It is definitely a reminder that this is not over. We have to continue to be vigilant."

“It’s extremely important we take care of our neighbors by getting vaccinated.”

Butte-Silver Bow Health Officer Karen Sullivan speaks in front of the health department building September 10 at a memorial for the county residents who lost their lives to COVID-19.

Father Patrick Beretta speaks Thursday at the memorial for the 90 Butte-Silver Bow residents who died from COVID-19.

Father Patrick Beretta leads loved ones and others in prayer and remembrance during a memorial for the 90 Butte-Silver Bow residents who died from COVID-19.