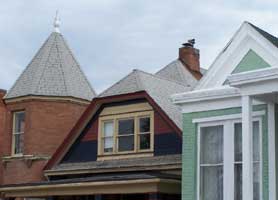 By Dick Gibson, Brick by Brick

Editor’s note: The following is one of a series of columns running throughout the summer from the Butte Citizens for Preservation and Revitalization.

Probably most Butte folks are a lot smarter than I am when it comes to architectural terms. But as someone who treasures the history our amazing buildings represent, I find myself involved in conversations with some pretty serious jargon, and for someone architecturally challenged like me, I get lost pretty quickly.

What exactly is a mansard roof? I know one to see one, but what does it mean? Turns out it is named for François Mansart (also spelled Mansard), a 17th century French architect whose styles were revived during the French Second Empire (1852-1870). They became popular because French houses were taxed according to the number of floors below the roof — so this high-pitched ceiling provided another usable, but untaxed, story. The double angles or curves of Mansard roofs cap four sides of a house or tower.

Another term that gets tossed at me is gambrel. That’s a kind of roof with two angles, but only on two sides of a structure. That leaves a gable (the usually flat, often triangular wall section between sloping roof edges) on each end. Looks like a barn to me — but lots of nice Butte homes have gambrel roofs too.

I knew what a cornice was, but I was never sure what dentils were until I helped Denny Dutton paint the cornice on the Stephens Hotel. Dentils (teeth, from the same origin as dental) are bands of little ornaments common on tin or copper cornices, but they are design elements that mimic the ends of rafters in wood construction. The oldest known dentils are on the tomb of Darius the Great of Persia, from about 500 B.C. In Butte, dentils are most prominent on business buildings uptown, but lots of homes also have them, or design elements emulating them.

So what about those jerkin-headed gables? That was a challenge, because they’re unusual. But Butte has a pair — on the old Conoco gas station at Granite and Wyoming. The north and south gables — which ought to be simple, vertical triangular walls between the east and west sloping roof edges — are truncated at their peaks by north- and south-sloping bevels that become part of the roof. Those slopes are the jerkin-headed gables. This gas station was featured in the Historic American Engineering Record, with a photo in the Library of Congress. Butte CPR has listed it as one of Butte’s Threatened Places.

Several homes in Butte also have these unusual clipped rooflines.

Jargon can be fun when you know what it means.

Dick Gibson is secretary and webmaster for Butte Citizens for Preservation and Revitalization. For more information about CPR, visit www.buttecpr.org or stop by the office on Thursdays from 10 a.m. to 2 p.m., 405 W. Park St., Suite 200.

Butte officer on shootout with homicide suspects: 'I was in fear for everyone's life'

Game wardens with Montana Fish, Wildlife & Parks are seeking information on a bull elk that was shot and killed northwest of Butte last week.

The Butte-Silver Bow Health Department confirmed Monday that three additional county residents, including an individual in their 20’s, have di…

By Dick Gibson, Brick by Brick