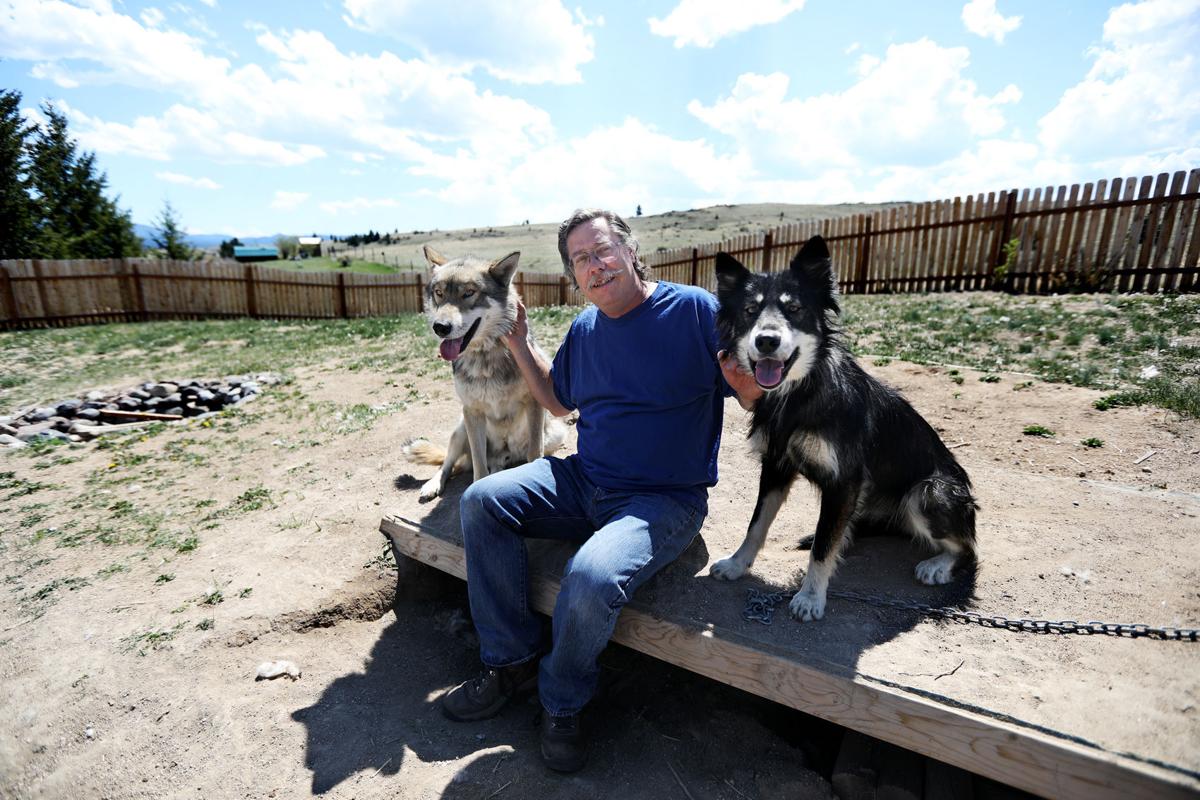 Chuck Ledgerwood holds his wolfdogs Benjamin and Star Dancer on the roof of the den the dogs dug for themselves in the back yard on Foothill Road near Timber Butte. 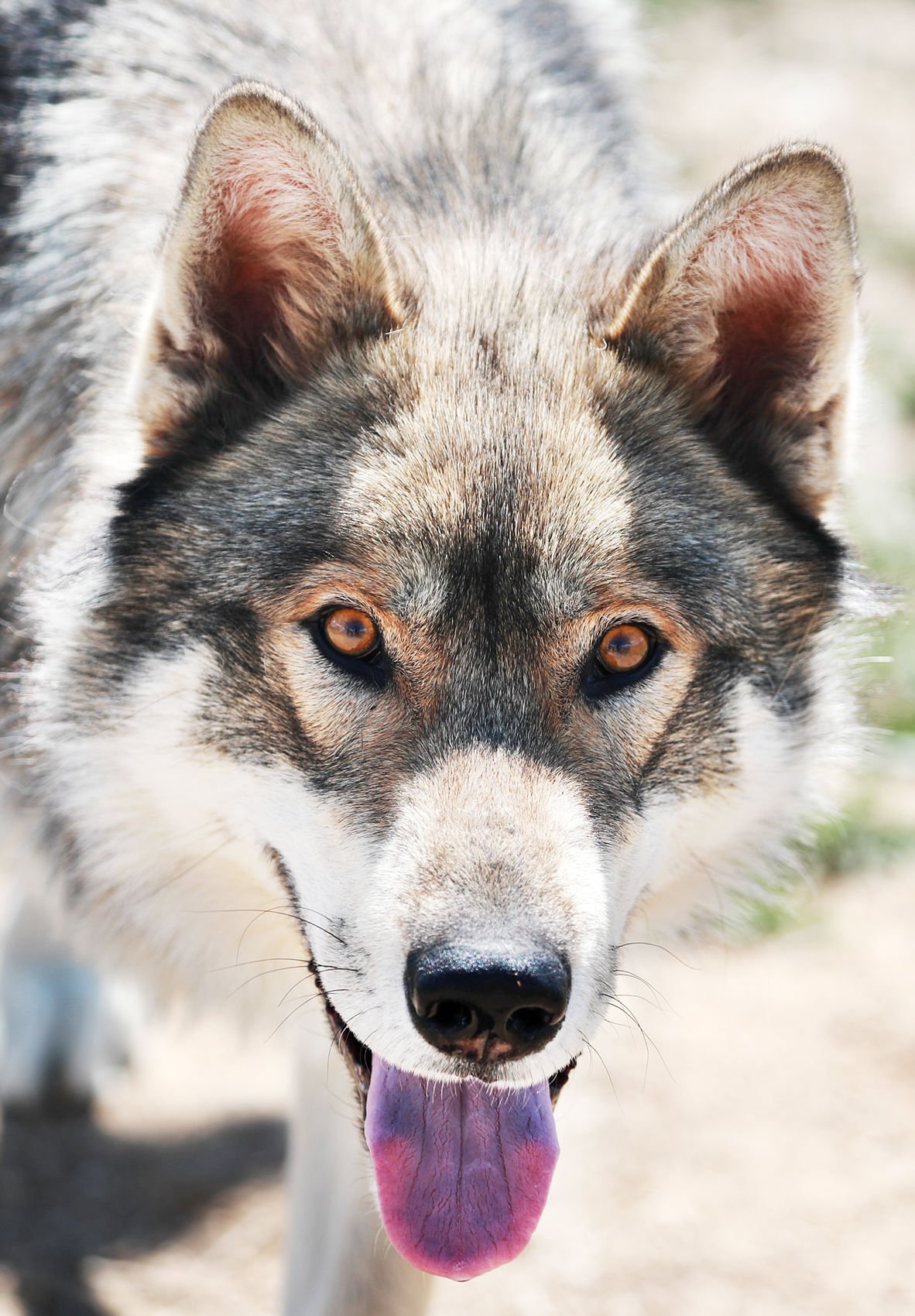 Benjamin, a wolfdog, hangs out in the backyard on Foothill Road next to Timber Butte. The male dog is about three years old and weighs around 120 pounds. 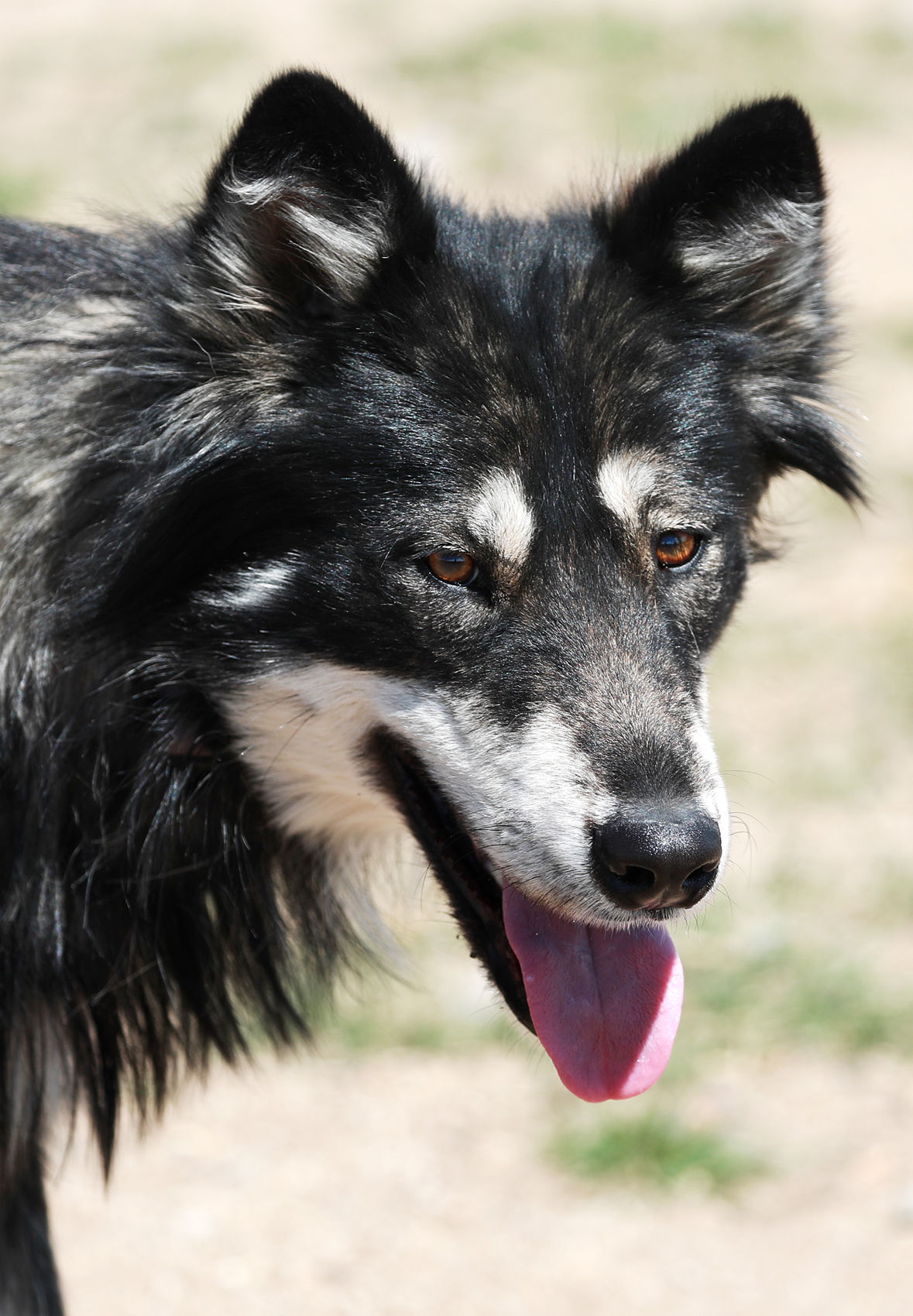 Chuck Ledgerwood's wolfdog Star Dancer was named for the white markings on her paws and a star shape on her chest when she was born. She has 35% wolf in her bloodline and is just over one year old. "Believe it or not she also has about 6% border collie in her," says Ledgerwood.

Chuck Ledgerwood’s two wolfdogs, Star Dancer and Benjamin, are pets like any other dogs — to him.

In the eyes of Butte-Silver Bow law, they are wild animals.

In April, two representatives from Animal Control and a Montana Fish, Wildlife & Parks game warden came to Ledgerwood’s home after the wolfdogs were reported.

The house is in south Butte, just inside city limits, and the property backs up to undeveloped private land. Ledgerwood admitted having the two wolfdogs, one 39.9% wolf and the other 35%.

He was presented with Butte-Silver Bow ordinances 6.20.110 and 6.20.120, which say any hybrid wolf is considered a wild animal, and to keep his wolfdogs, they needed to be permitted by the county and kept in a regularly inspected housing enclosure.

“My animals are like family members. They've caused so much heartache over this we've decided to sell our house and move out of here," Ledgerwood said.

The required enclosure, according to the ordinance, must be roofed, have a floor of portland cement concrete at least four inches thick, and an eight-foot-tall chain-link steel fence.

Also required is an additional perimeter fence located not less than four feet and no more than six feet away from the actual enclosure holding the animals.

That “zoo” enclosure, as Ledgerwood called it, would be cruel to his pets, who thrive on being able to roam their yard freely.

“It will hurt the animals,” he said. “They would be dead in less than a year.”

This week, Ledgerwood was issued a warning that he had 30 days to begin the permitting process for the animals and should continue construction of the enclosure.

But after 17 years in Butte, Ledgerwood instead plans to move to somewhere in Montana where his wolfdogs would be permitted. He’s considering Jefferson or Madison counties, and he’s already showing his Butte home.

Many cities in Montana have ordinances either prohibiting wolfdogs or requiring a similar wild animal permit and enclosure.

If a wolfdog is found in Billings, an owner must prove in court the animal shouldn’t be euthanized then and there. Even if that’s proven, the wolfdog must immediately be taken out of city limits.

Bozeman has an ordinance similar to Butte, where a wolfdog can be kept if permitted and enclosed.

Missoula prohibits keeping wolfdogs in city limits without a commercial use permit from FWP, but not in the greater county, according to Brett Bloom, shelter attendant for Missoula County Animal Control.

Neighboring Anaconda-Deer Lodge has nothing about wolfdogs in its ordinances.

Statewide, however, only hybrid canines that are over 50% wolf require special reporting, fees and an identifying tattoo to possess.

Whereas in Wyoming, wolfdogs cannot be possessed at all.

Ledgerwood speculated he was targeted out of disdain for wolves.

“I don't think it's me. I think it's the dog that looks like a wolf. I think there's a bias against wolves in general in Montana, Colorado, Idaho. It doesn't matter where you go, there are people out there that hate wolves, and they want them all killed,” he said.

Ed Randall, director of Animal Services in Butte, said that wasn’t the case.

"I understand Mr. Ledgerwood believes he's being treated indifferently, and he's not. We have ordinances that we have to enforce. We enforce the ordinances,” he said.

"This is nothing different than any other animal being picked up, or that we get complaints on. The fact is, he has wolfdogs. And we enforce the ordinances that are in our municipal code," he said.

The ordinance isn’t often used in the county, Randall said.

“Very few people have wolfdogs. And we have enforced it a couple times I believe in Butte-Silver Bow in the last 15 years. But it is an ordinance that I'm not interested in changing. I'll surely look at it. And I have looked at it. But I don't think it needs to be amended because one person's upset with the enforcement of the ordinance. We do what's best for the greater good,” he said.

John Moodry, who helps oversee animal services as assistant director of Community Enrichment, said the ordinance was about public safety.

"When it’s a hybrid wolf, it's more dangerous. That’s why the provision is in there,” he said.

On Thursday, Ledgerwood invited The Montana Standard to his home.

“So you came to see the horrible animals,” he said with a smile.

In the yard where they stay full-time, the dogs came running. Benjamin is three years old, 120 pounds, and he looks like a wolf. He walks like a wolf, and he digs like a wolf.

Star Dancer, one year and seven months old, has fewer obvious wolf characteristics. But like Benjamin, she’s a digger.

When she gave birth to six puppies in February, she dug herself a den in the yard. The puppies were all sold out-of-state, Ledgerwood said.

The yard, about a third of an acre, is secure, Ledgerwood contends. Most of the ground is bedrock, and elsewhere he’s dug in his high wooden fence well below the surface and put in guards where the ground is soft.

He said in the whole time he’s had the two dogs, Benjamin escaped only once to the rolling hills behind the house because a family member forgot to close the gate. Ledgerwood caught him chasing mice.

In the company of their owner, the two wolfdogs were extremely friendly, nuzzling in for pets and quickly comfortable enough to jump up on the visitors.

“Get down,” Ledgerwood told them.

His argument against the ordinance itself is that his dogs are not wild animals.

“But it’s because they want to do it,” Ledgerwood said. He was captivated by wolfdogs long ago for their intelligence and independent demeanor.

Ledgerwood initiated a correspondence with Butte-Silver Bow county attorney Eileen Joyce, trying to convince her the ordinance shouldn’t apply to his animals.

As of last contact, Joyce told him the ordinance would not be modified for his case.

The Montana Standard left a message with Joyce Thursday morning.

The law makes it clear his animals have to be enclosed in a way Ledgerwood finds unacceptable. He’s leaving the county behind, but not the disagreement.

He said he wants to raise awareness about the ordinance, and hopefully change it.

“I could not do anything and not say anything, just leave it alone and leave,” he said. “But what about all the other people that have wolfdogs or want wolfdogs? They're not going to know about this either until somebody knocks on their door.”

A field of ice blocks on Mars was captured on camera

A field of ice blocks on Mars was captured on camera

Judge scolds Butte counselor before sentencing her for Medicaid fraud

Chuck Ledgerwood holds his wolfdogs Benjamin and Star Dancer on the roof of the den the dogs dug for themselves in the back yard on Foothill Road near Timber Butte.

Benjamin, a wolfdog, hangs out in the backyard on Foothill Road next to Timber Butte. The male dog is about three years old and weighs around 120 pounds.

Chuck Ledgerwood's wolfdog Star Dancer was named for the white markings on her paws and a star shape on her chest when she was born. She has 35% wolf in her bloodline and is just over one year old. "Believe it or not she also has about 6% border collie in her," says Ledgerwood.