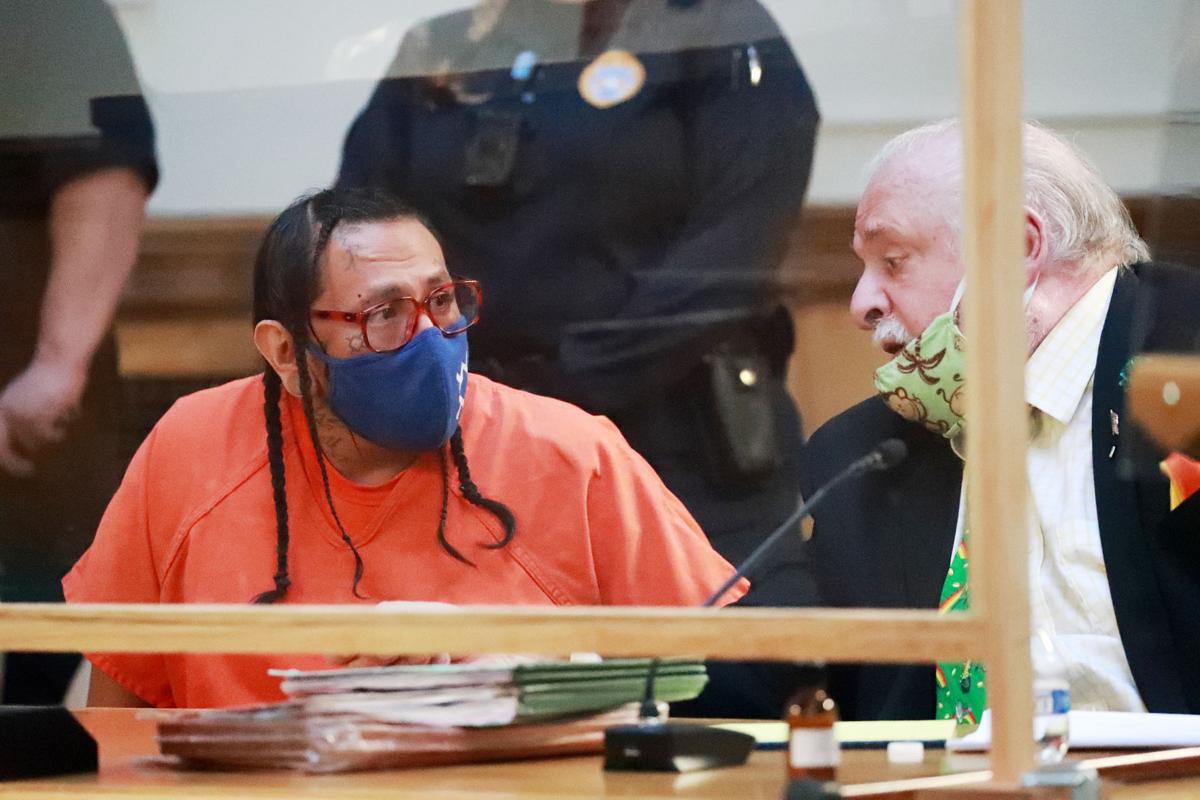 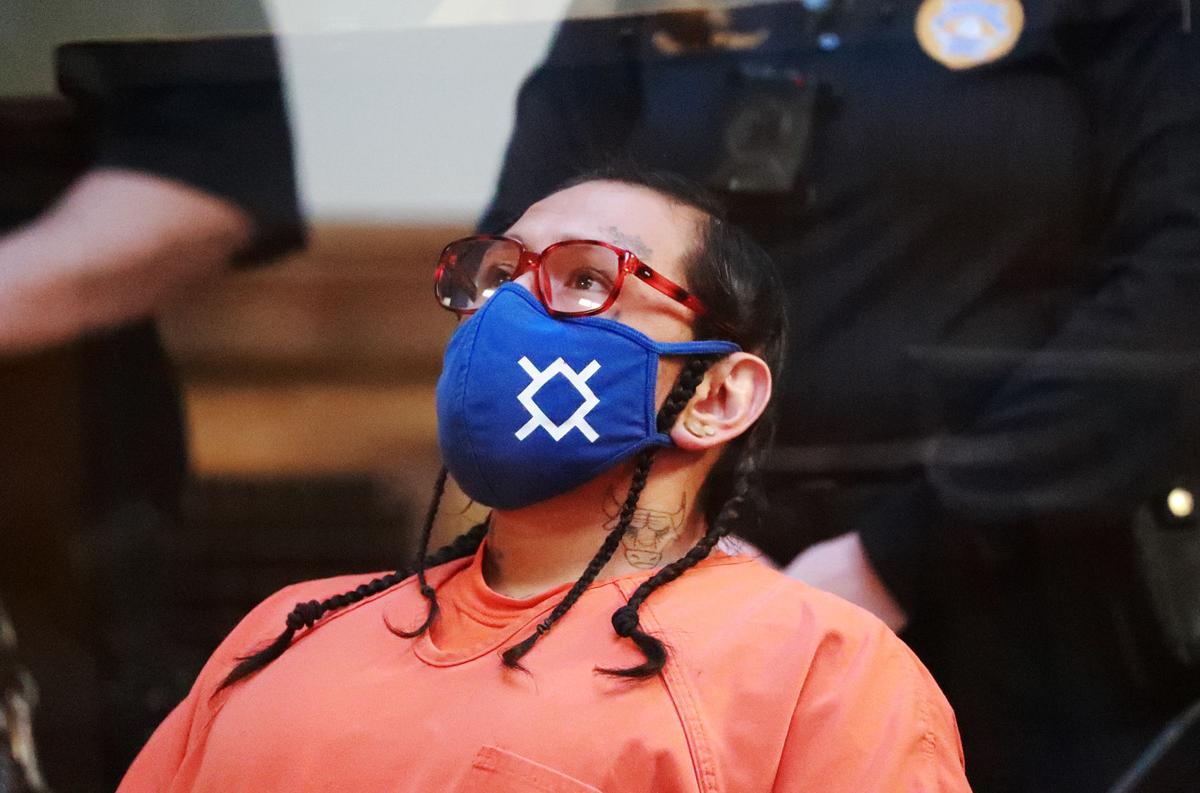 Seidel Lee Pine, 34, looks up as he listens to prosecutors on Wednesday afternoon during his sentencing hearing in District Judge Robert Whelan's court in Butte.

A judge sentenced a man to 35 years in the Montana State Prison on Wednesday for using a stun gun to confine and control his ex-wife in Butte for days and raping her in a car on a dirt road.

“This was about one individual terrorizing another individual,” District Judge Robert Whelan told 34-year-old Seidel Pine. “She relives this matter to this date and will into the future as she receives treatment.”

After a three-day trial in September, a jury found Pine guilty of felony aggravated kidnapping and sexual intercourse without consent, as well as misdemeanor partner-family member assault, for crimes that occurred in November 2018.

Whelan sentenced Pine to 50 years for kidnapping and 20 years for the rape, but ran them concurrently and suspended 15 years, for a total of 35 years. He gave Pine credit for time served on the misdemeanor conviction.

Whelan could have sentenced him to life in prison on the kidnapping conviction and up to life or 20 years for rape. Prosecutors wanted a 60-year sentence with 20 years suspended, while Victor Bunitsky, Pine’s attorney, asked for a total of 15 years.

Bunitsky said Pine had four children with his ex-wife, the victim in the case, and said his proposed sentence would allow Pine to take sexual offender courses in prison and “get out and spend time with his children and become the good father he was supposed to be.”

But Whelan said he heard “little if any mention” of the children during the trial.

“And now I’m asked to consider the children during sentencing, and that doesn’t sit well with me, I can tell you that,” he said.

Pine told the judge he hurt the victim “mentally, emotionally and spiritually” but said he never held her against her will or forced himself on her.

Pine has been in the Butte jail for 824 days, longer than any current inmate, and could have appeared via video from there Wednesday because of COVID-19 precautions. But he exercised his right to appear in person and did so with Bunitsky.

Prosecutors say Pine used a Taser device to hurt, threaten and confine the woman over several days in a house in Butte that Pine shared with friends in late November 2018, then drove her to a dirt road near Rocker on Nov. 26 and forced her to strip naked and walk out in the cold and snow.

The victim told jurors Pine also hit and kicked her that day then drove her to another location and forced her to have sex against her will. She says she finally got away on Nov. 29 and had an employee at the Stokes grocery store call police.

Photographs taken at the hospital showed numerous bruises on her legs and back and several red puncture marks that prosecutors say were caused by the stun gun. The pictures were shown to jurors.

The two were together for several years and were married for a year before they divorced in 2015, and Pine says they met up in November 2018 trying to reconcile. She came to Butte from Missoula and they admitted drinking and doing meth together.

Pine said during trial that they had a dysfunctional relationship, but denied confining or raping the woman. He said the sex in question was consensual “make-up sex,” and during closing arguments at trial, Bunitsky said she was being a “drama queen.”

Prosecutor Kelli Fivey, who tried the case with colleague Mike Clague, seized on that during her closing arguments.

“She was brutalized, she was terrorized, she was backhanded, kicked and tased … and held against her will, and SHE is a drama queen?” Fivey said.

Fivey told Whelan on Wednesday that the victim was terrorized for days but in a presentence investigation, Pine showed no remorse and took no responsibility, and he was deemed a high risk to reoffend.

“Our job today is to give her justice, to tell her that this court has heard her,” Fivey said.

Clague scoffed at Bunitsky’s fatherhood argument, saying Pine had brutalized their mother and “now he wants the opportunity to be a father to his children.”

“This is not the kind of person who deserves to be around children,” Clague said.

After the hearing, Fivey told The Montana Standard she was pleased with the sentence.

“I think the court was very thoughtful in its judgment,” she said. “He (the judge) had the benefit of sitting through the trial and he was privy to all of the allegations and privy to all the evidence. And I think today he told (the victim) that he heard her and he most certainly gave her justice today.”

The woman gave the court a victim-impact statement previous to sentencing but was not in the courtroom Wednesday.

“I'm about to call her and I'm sure she's going to be very pleased,” Fivey said.

Seidel Lee Pine, 34, looks up as he listens to prosecutors on Wednesday afternoon during his sentencing hearing in District Judge Robert Whelan's court in Butte.