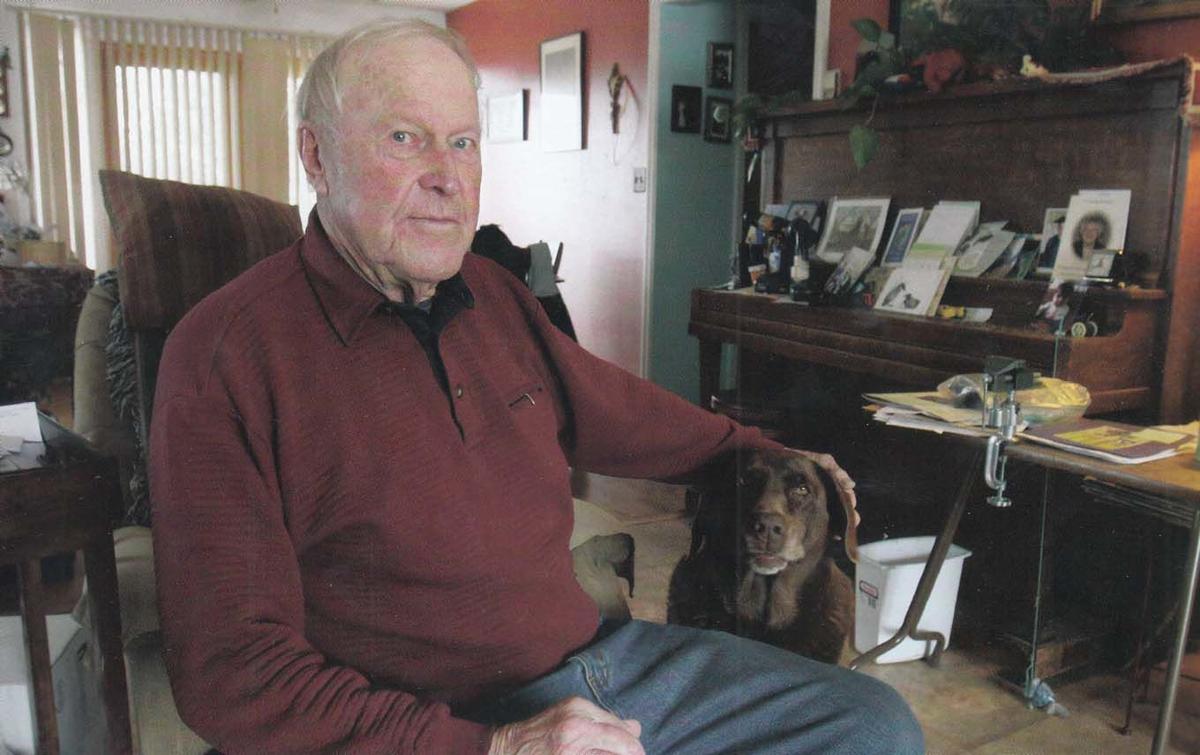 Tony Schoonen was photographed with his pal Ginger at his home in 2018. The photo appeared in the May/June 2018 edition of Montana Magazine. 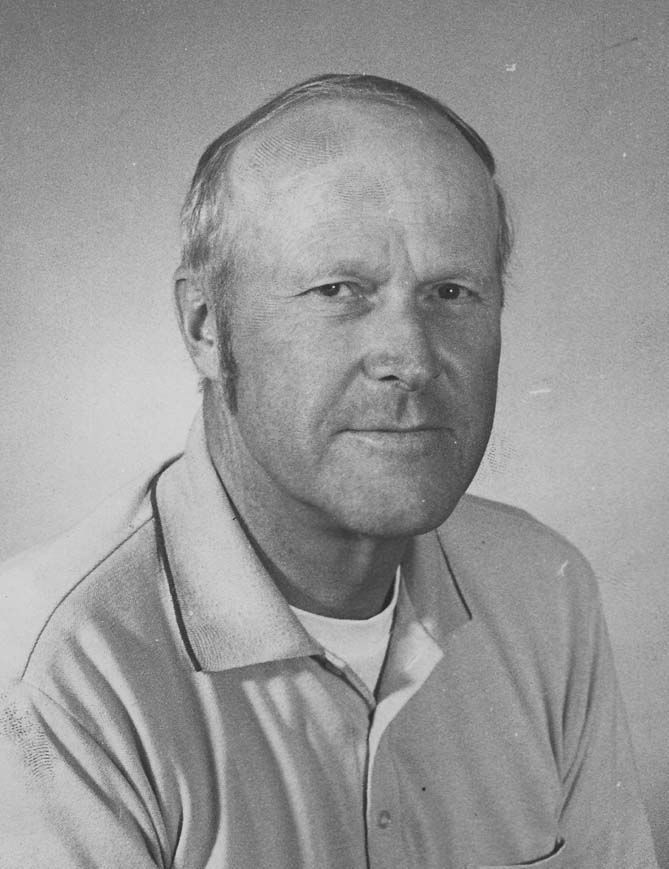 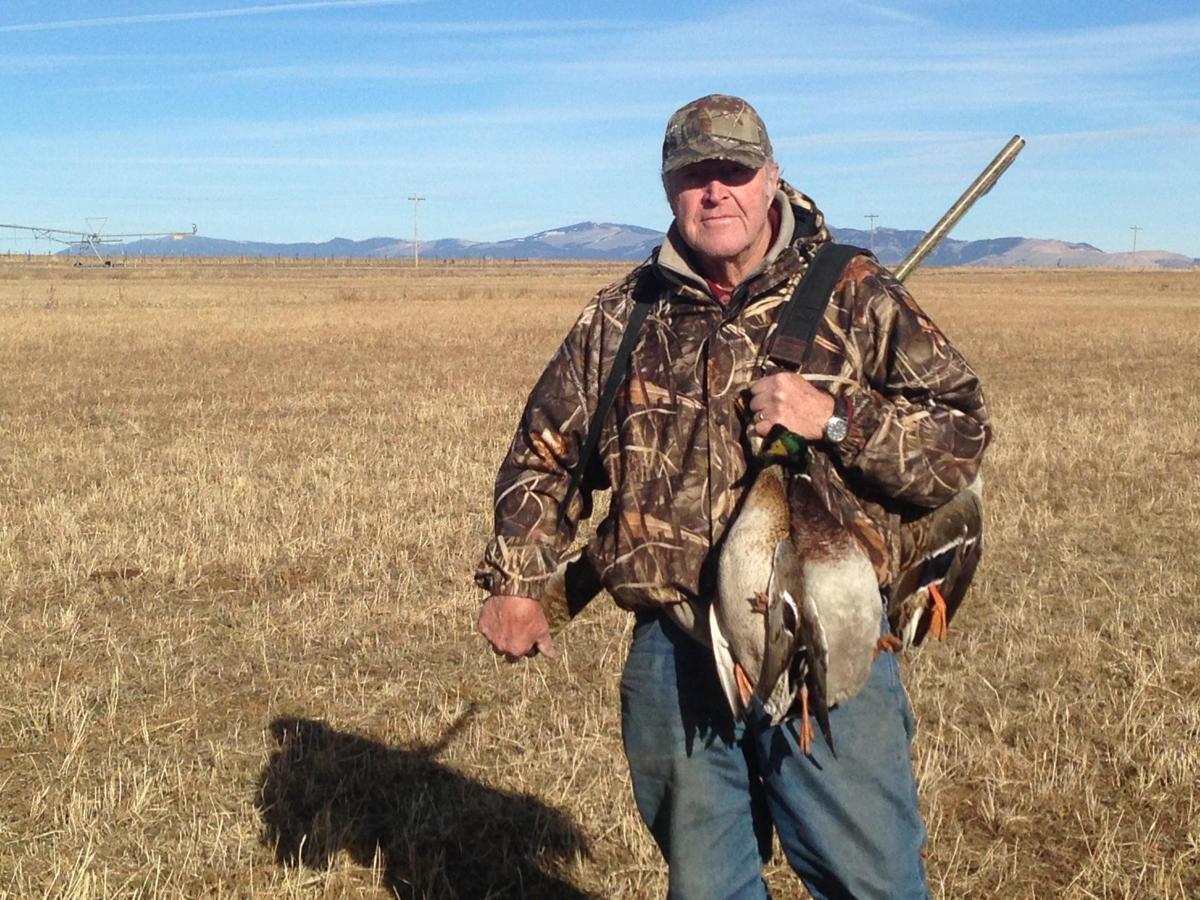 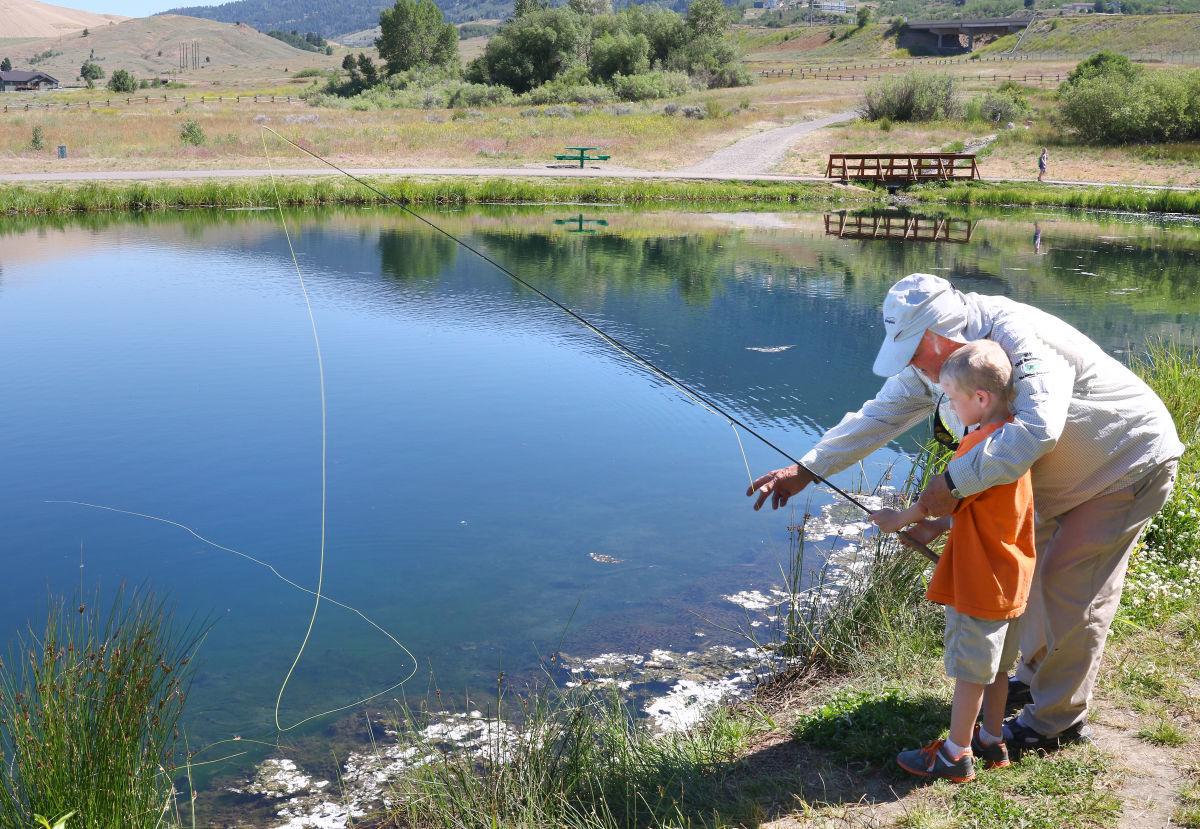 Tony Schoonen of the Skyline Sportsmen gives seven-year-old Walker Brown a fly fishing lesson as they try their luck at the children's fishing pond in 2015 during the dedication and grand opening of Skyline Park.

Schoonen’s resume spans decades on behalf of hunters, anglers and the right to public land and stream access. A man who came from the humblest of beginnings, Schoonen never forgot the "every man," said his longtime friend Roy Morris.

Morris, a former president of the George Grant Chapter of Trout Unlimited, said Schoonen was driven to fight for access issues in Montana because he wanted “the everyday person” to be able to hunt and fish and be able to use the resources.

“The blue collar people in Montana should be able to fish and hunt," Morris said of Schoonen's philosophy. "He was really concerned about that.”

Chris Marchion, a member of Butte’s Skyline Sportsmen’s Association and Anaconda Sportsmen’s Club, said that there weren’t many conservation issues in the 1970s, ’80s, ’90s and 2000s that Schoonen wasn’t a major contributor to and all on behalf of the public’s interest.

Marchion listed off just some of the issues that came up 20 or 30 years ago that Schoonen was closely involved in, often helping to craft rules.

“Block management (giving hunters access, with permission, on private land), the (Montana Fish, Wildlife and Parks) Habitat for Montana program (hailed as a flagship habitat conservation program), access to state lands, that was a big issue he was on the forefront of that,” Marchion said. “And (U.S.) Forest planning issues in the ‘80s. He was key on making sure we didn’t over-road our country or have giant clear cuts. Tony was on the forefront on all of the issues.”

Schoonen’s advocacy for public stream access kicked off in the 1970s when he joined forces with fellow local anglers Jerry Manley and Tom Bugni to form Montana Stream Access Coalition. The coalition teamed up with Bozeman lawyer Jim Goetz and they went to court over access issues in the Dearborn River.

The suit went to the Montana Supreme Court in 1984. The coalition won. But Schoonen's fight for public access didn't stop there. Goetz worked on possibly as many as 20 legal cases with Schoonen over the roughly 50 years Goetz knew him.

“I’m really saddened. He was a real warrior for the public interest,” Goetz said Wednesday.

Goetz said that before Schoonen died, the two were working on a Big Hole access issue. That work is not done yet, Goetz said.

Nick Gevock, conservation director for Montana Wildlife Federation and a former Montana Standard journalist, said he first encountered Schoonen when he was a reporter.

“He was always standing up for wildlife and public access to it. He was often standing out there alone but he brought people with him. He was such a conservationist,” Gevock said. “We wouldn’t have the opportunities sportsmen and sportswomen enjoy it if weren’t for people like Tony.”

“He really shaped what I thought was important,” Morris said. “He was a teacher. That was his background.”

Born in April 1930, Schoonen was one of 10 children. The Great Depression was just beginning and it touched Schoonen's family. As a result, Schoonen knew hardship. His family sent him and five of his siblings to an orphanage in Twin Bridges because there wasn’t enough money at home to raise the entire brood.

“I learned how to work there,” Schoonen told David McCumber, editor of the Standard about a year ago for a Montana Magazine story.

Morris said Schoonen became one of the first licensed fishing guides in Montana. He was also instrumental in the creation of the Big Hole and Beaverhead river recreation rules, Morris said. Those rules are held up by many across the state as a model and a yard stick for other rivers in the Big Sky state.

Schoonen got undergraduate and graduate degrees from Montana State University and the Western Montana College. He became a school teacher and principal in Whitehall, Cardwell and Butte for decades.

Morris, who described Schoonen as his best friend, called Schoonen a natural-born teacher.

“Whenever we went fishing, if there was a young person around, he’d show them the right fly and how to hold the rod. He was a teacher all the time,” Morris said. “He was teaching people about public access.”

“What a great guy,” Keane gushed as soon as he heard the news. “Dedicated, hard working. If we could all have such a good run as Tony did.”

Schoonen met his future wife, Margaret Ann Kuhl, while in graduate school. They had four children, Tony Jr., Maggie, Jack and Rebecca. Margaret preceded him in death in 2015.

Jack Schoonen said Wednesday that his dad’s work did not go unrecognized. He won “a ton of awards.”

Land Tawney, president and chief executive officer of Backcountry Hunters and Anglers, said through an email that “there is no greater testament to the fact that one individual can make a difference than Tony.

“He was a force of nature, humble and steadfast…The lion is dead but lives on in all our hearts,” he wrote.

Marchion said that Schoonen inspired him to get involved in issues and causes he believes in.

“He inspired not only me but a lot of people to speak up for what’s fair and equitable and to be respectful of the resources we’re using,” Marchion said.

Schoonen never stopped thinking about others, especially when it came to sportsmen’s activities, said Morris.

Morris said that days before Schoonen died, he went hunting.

“He went out by himself. He went out on Saturday. He got three ducks with two shots,” Morris said. The next day Schoonen, already in the hospital, called Morris from his bed.

“He said he got a couple of ducks for me,” Morris said.

For the second year in a row, Officer Rich O’Brien of the Butte-Silver Bow Law Enforcement, has been named 2020’s Safe Space Domestic Violence…

Tony Schoonen was photographed with his pal Ginger at his home in 2018. The photo appeared in the May/June 2018 edition of Montana Magazine.

Tony Schoonen of the Skyline Sportsmen gives seven-year-old Walker Brown a fly fishing lesson as they try their luck at the children's fishing pond in 2015 during the dedication and grand opening of Skyline Park. 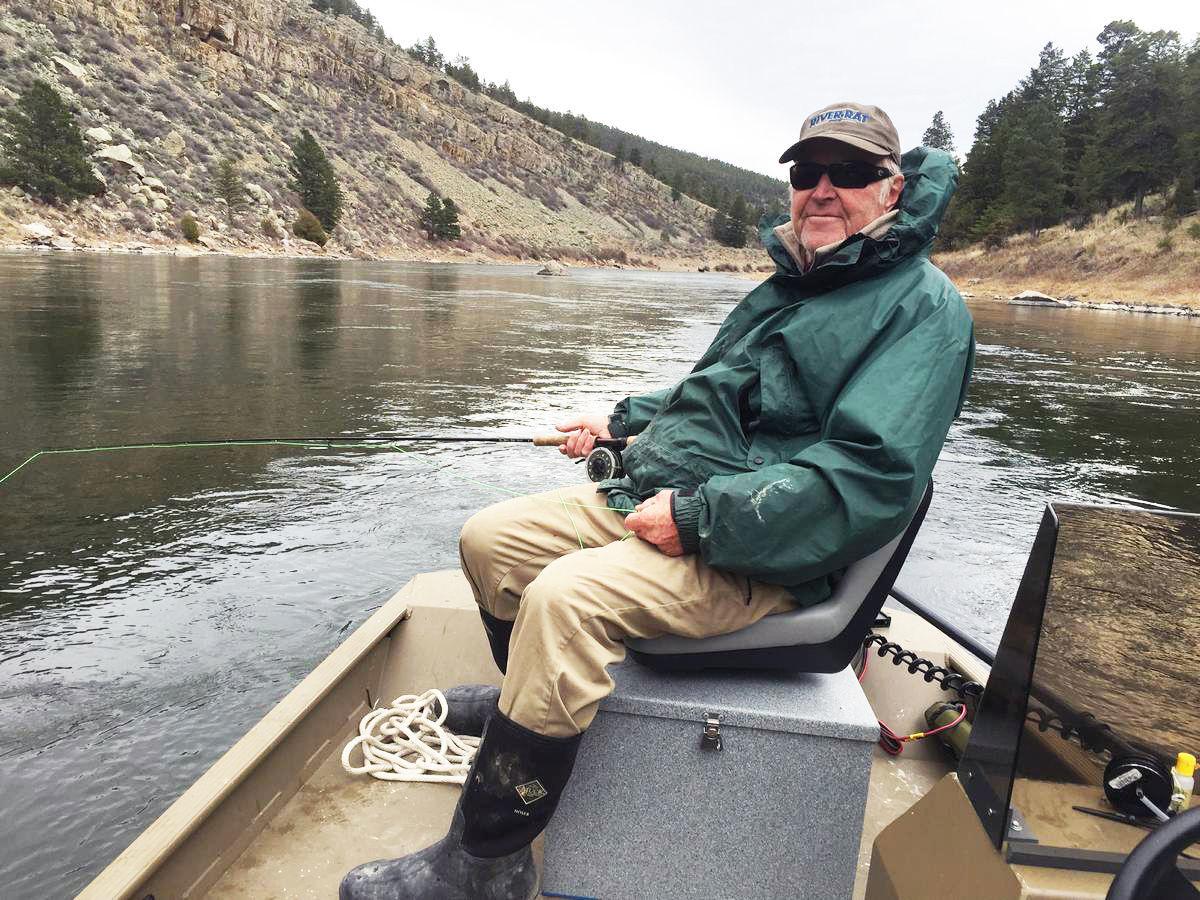 Montana Western alum Tony Schoonen of Butte was inducted into the Montana Outdoor Hall of Fame a few years ago.