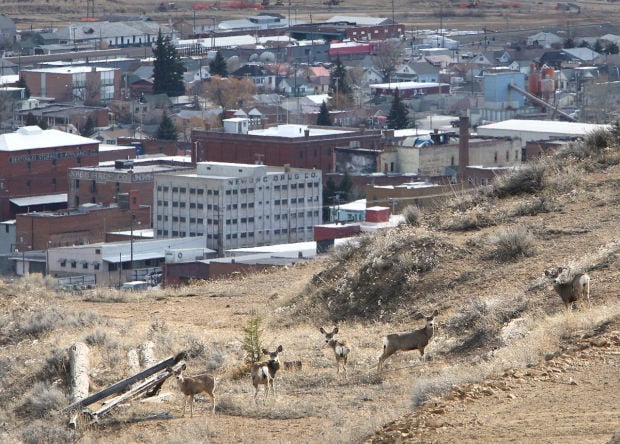 A small group of deer on the west rim of the Berkeley Pit are ever vigilant to the approach of humans. 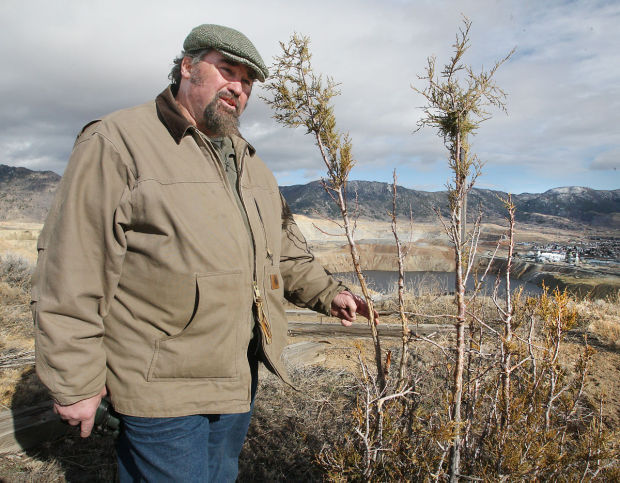 Tom Malloy, reclamation manager for Butte-Silver Bow County, speculates that deer horns have rubbed this juniper bare along the western edge of the Berkeley Pit. 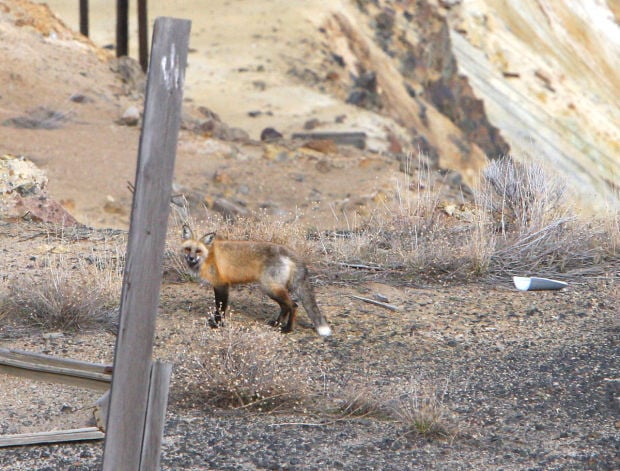 A red fox pauses for a moment on the western edge of the Berkeley Pit in this recently taken photograph. 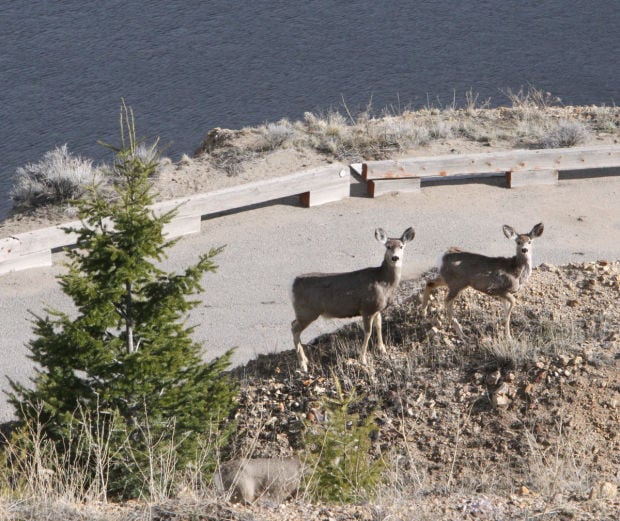 Deer emerge from the cover above the west wall of the Berkeley Pit in this recent photo. 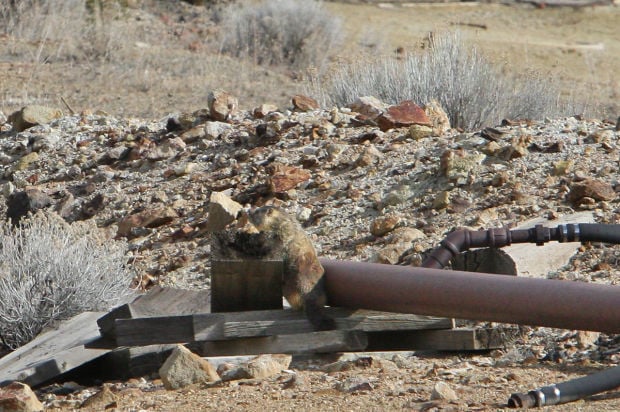 A marmot heads for cover in the rocks below the Granite Mountain Memorial just west of the Berkeley Pit lake.

The area surrounding the Berkeley Pit — a man-made lake of toxic water in Butte that would likely kill a human or animal that drank from it — is teeming with life.

From fox and marmot to deer, a surprising variety of wildlife calls the Berkeley Pit perimeter home.

Tom Malloy, reclamation manager for Butte-Silver Bow, said he has seen as many as 16 to 20 deer at one time along the pit's west edge, where the old viewing stand used to be.

Malloy said the reason why wildlife make their home along the outside of the cone of deadly water is pretty simple.

"There's no people, no shooting," Malloy told The Standard.

The land along the west side of the pit belongs to Atlantic Richfield Co. and is fenced off.

How do animals know not to drink pit water, and where do wildlife drink?

Vanna Boccadori, state wildlife biologist, said animals have good instincts and likely pick up a smell that tells them to leave the pit water alone.

"If you pour battery acid on the ground, they wouldn't drink that either," Boccadori said.

Dean said he believes the animals are drinking from Moulton Reservoir, a clean watering hole several miles north of the Berkeley Pit.

Mark Thompson, manager of environmental affairs for Montana Resources, has a different idea.

Thompson speculated that the wildlife drink from rain and snow melt that collects in the area around the Horseshoe Bend Water Treatment Plant in what was formerly the McQueen neighborhood on the northeast side of the toxic lake.

Thompson said employees at Montana Resources have also seen quite a few wild animals on the active mine's property east of the Berkeley Pit.

Thompson told a story about a bear that wandered into a break room and ate an entire box of donuts.

He also said beaver live in and around the Yankee Doodle Tailings Pond, which he said is not dangerous for the beavers. The water in the tailings pond is relatively good water, Thompson said.

An elk once got trapped on a ledge of the active open pit mine, Dean said.

Dean said the state agency shot cracker shells to try to get the elk to come down, but it wouldn't move.

"We didn’t know if she fell down (onto the ledge) from the top; we were just hoping for the best that she could get down," Dean said.

Apparently the elk did find its way off the ledge, because when Dean checked on the animal later, it was gone.

Perhaps no story about life at the pit would be complete without mentioning the 342 snow geese that landed on the toxic lake during a storm in 1995 and died.

Autopsies showed the dead snow geese had burned holes in their esophaguses.

Scientists believe the snow geese must have drank the Berkeley Pit water.

As a result of that tragedy, ARCO and MR put into place three high-tech devices that scare birds away.

The devices sound noises — everything from the sound of a gun blast to rock-and-roll — to scare birds who get too close to the lake, which is so large it can be seen through satellite imagery.

In addition to the noise devices, called wailers, an MR employee checks the pit lake every daylight hour during both spring and fall migratory season.

At night during that period, an MR employee checks the pit lake every four hours with a high-powered searchlight.

MR and ARCO want to make sure no more bird tragedies happen. MR maintains a bird tally. Between 2010 and 2014, Thompson reported nearly 18,000 birds observed. During the same period, only 13 bird mortalities occurred in the pit.

Thompson said he's impressed with how animals can adapt.

"It's just incredible where things choose to thrive and survive and life goes on," Thompson said. "It’s always amazed me."

Deer who live at the Berkeley Pit might be beneficiaries of Superfund remediation.

Marmots, who like to burrow under rocks, eat nearly any kind of vegetation, Douglass said.

Fox would feast on deer mice and any rabbits that might wander through.

Butte mine moving lots of rock for tailings pond upgrade

In anticipation of receiving the permit that will allow Montana Resources to raise the Yankee Doodle tailings pond, the mining company is movi…

Plant found in the pit could help restore damaged land

Plant life at the Berkeley Pit may actually hold the key to helping mine-damaged lands recover their vitality.

If there’s one thing industry, the Environmental Protection Agency, the state and the community can agree on, it’s that it’s time to start inv…

When more than a thousand snow geese landed on the toxic Berkeley Pit Monday night, the birds weren’t just responding to the need for rest, bu…

After a tense few days of struggling to get more than a thousand snow geese to leave the Berkeley Pit's contaminated water, Montana Resources …

Mine officials counting dead geese in Berkeley Pit, no solid number yet

Butte mine officials: Snow geese deaths number into the thousands

A small group of deer on the west rim of the Berkeley Pit are ever vigilant to the approach of humans.

Tom Malloy, reclamation manager for Butte-Silver Bow County, speculates that deer horns have rubbed this juniper bare along the western edge of the Berkeley Pit.

A red fox pauses for a moment on the western edge of the Berkeley Pit in this recently taken photograph.

Deer emerge from the cover above the west wall of the Berkeley Pit in this recent photo.

A marmot heads for cover in the rocks below the Granite Mountain Memorial just west of the Berkeley Pit lake.