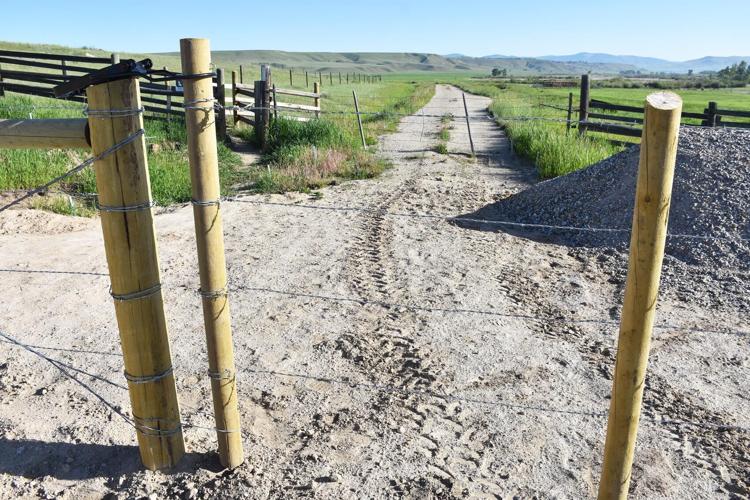 Powell County wants to build a trailhead at the end of Washington Street in Deer Lodge for the Old Yellowstone Trail. 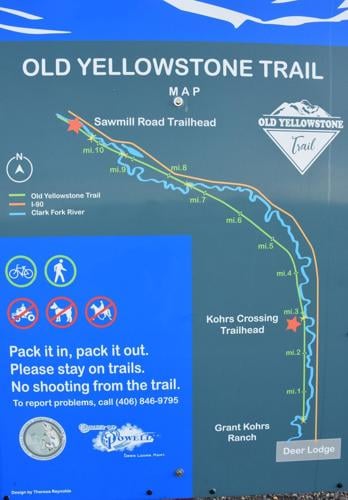 When complete, the Old Yellowstone Trail will be a bike and pedestrian path from Deer Lodge to Garrison.

Rock Creek Cattle Co. lost a round Friday after a court hearing of more than four hours focused on whether a portion of a road Powell County wants to use for a recreational trail is a county road.

District Court Judge Ray Dayton did not rule about the status of the road. Instead, he found that Rock Creek Cattle Co. had failed to meet legal criteria necessary for him to grant a preliminary injunction to continue blocking construction of the Old Yellowstone Trail.

Dayton had earlier stopped trail construction June 14 with a temporary restraining order sought by Rock Creek Cattle Co., which is both a cattle ranch west of Deer Lodge and an exclusive enclave for the wealthy.

Theoretically, Powell County’s contractor can now resume construction of the trail. But Dayton cautioned that if the dispute about the road goes to trial and the county loses, it could be held responsible for restoring any disturbed lands.

No date was set for a trial.

He testified that construction which started in May was stressful to cows and calves during calving season, a reality he said could affect the calves putting on weight and affect the ranch’s bottom line.

McEnery asked whether there weren’t other areas within the ranch’s 35,000-plus acres where calving could occur. Henningsen replied that the area in the vicinity of the trail is ideal for several reasons. Among them, he said, are cool season grasses that green up early.

He said he had been led to believe the county would respect the ranch’s desire that construction not occur during calving season, but the work proceeded anyway.

Henningsen also described concerns that trail activities could spread noxious weeds and that trail patrons with dogs could lead to problems with livestock. That could be true, he said, even if the dogs are leashed.

Owens said his review of records suggested that the road in question — referred to as Old County Road No. 9 — was more likely not to be a county road than the alternative.

Yet McEnery called witnesses and produced maps that suggested Old County Road No. 9 has been a county road since the early 1900s and has never been formally abandoned by the county.

Powell County Commissioner Doug Crachy said he was born and raised on a small cattle ranch. He testified that he does not believe pedestrians or bicyclists on the trail would unduly affect cows and calves.

“I don’t think many people are going to be walking through there during calving season,” Crachy said.

He said the county plans to monitor weeds along the trail.

The vision for the Old Yellowstone Trail anticipates easy access for residents of Deer Lodge and Powell County, as well as visitors, to a level, 10.5-mile trail conducive to biking, strolling, talking, family time, bird watching and more.

The trail would connect Deer Lodge to Garrison and already features a trailhead at the road that leads to the entrance of Rock Creek Cattle Co.

Roughly 7.5 miles have been completed. About 3 miles still need work. Powell County had hoped to complete those miles this summer, intending to also add a trailhead at the end of Washington Street in Deer Lodge.

Its lawyers argued that the old road Powell County wanted to incorporate in the trail was not a public, county road and sought a temporary restraining order that would stop construction.

Dayton granted the order the following day and set July 1 as the date for reviewing Rock Creek’s accompanying motion for a preliminary injunction.

Rock Creek Cattle Co. said a temporary restraining order and a preliminary injunction would preserve the status quo until a trial provided a forum for each side’s case.

And it defined the status quo as the ranch’s “exclusive right to use its property without interference from the county.”

The Grant-Kohrs Ranch National Historic Site also has differed with Powell County’s conclusions that Old County Road No. 9 is a county road. McEnery has said she hopes that dispute can be settled administratively.

In part, the path of the Old Yellowstone Trail follows the former right-of-way of the Milwaukee Road. The county acquired that right-of-way with money from the state’s Natural Resource Damage Program.

The NRDP funds are meant to support restoration of damaged natural resources and to help compensate for the decades when public recreation was hamstrung by mining and smelting pollution.

A collaborative effort last week in the Gravelly Range collected specimens of bees as part of a prolonged effort to establish a baseline of wild bee species in Montana. Entomologists from Montana State University, Forest Service botanists and others pitched in to collect specimens.

Powell County wants to build a trailhead at the end of Washington Street in Deer Lodge for the Old Yellowstone Trail.

When complete, the Old Yellowstone Trail will be a bike and pedestrian path from Deer Lodge to Garrison.