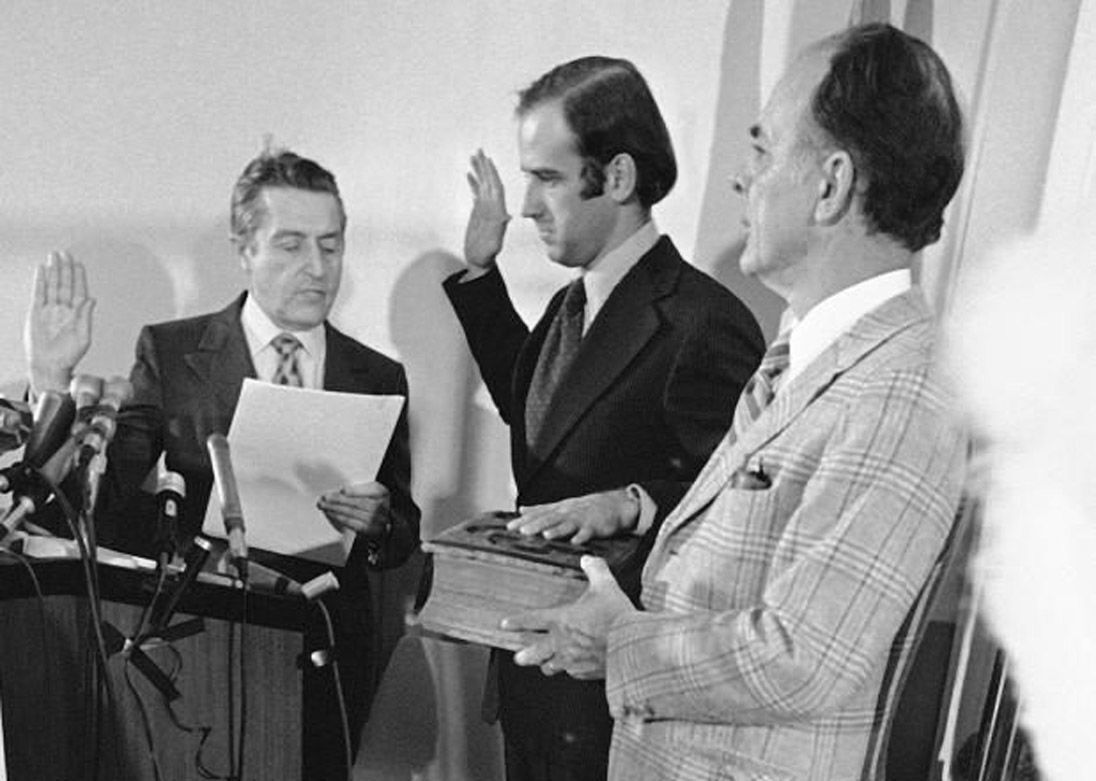 Joe Biden, center, takes the oath of office on Jan. 5, 1973, next to the hospital bed of his 4-year-old son Beau Biden. Biden was sworn in as Delaware's U.S. senator by Senate Secretary Frank Valeo, Mike Mansfield's top Senate aide, left, in a Wilmington hospital following a car accident that killed his wife, Neilia, daughter Naomi and injured his two sons. 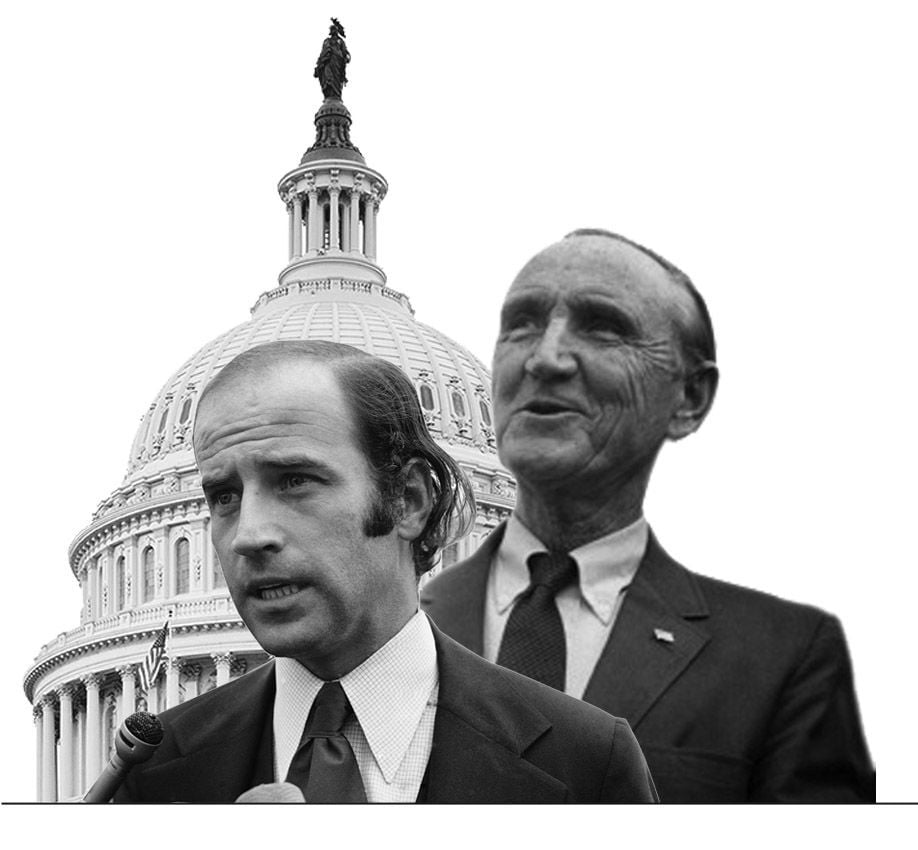 On November 7, 1972, 29-year old Joseph R. Biden won election to the United States Senate in Delaware. His victory margin against the Republican incumbent was less than 3,200 votes.

A few days before Christmas, and just after Biden turned 30, his wife Neilia and daughter Naomi were killed in an automobile accident. Biden’s sons, aged three and four, were seriously injured in the accident but survived after lengthy hospital stays. They had all been Christmas shopping while Biden was in Washington, D.C. assembling his Senate staff.

Biden got news of the accident in a telephone call and, as he has said, “my whole world was altered forever.” Among his first thoughts was to abandon his budding political career in order to tend to his sons. “I told the Senate majority leader, Mike Mansfield, that I was not going to be a senator,” Biden wrote in his 2007 memoir. He told Mansfield that he could not “be the father I wanted to be” and also juggle the demands of the Senate.

By 1972, Mansfield, the former mucker who had worked in Butte’s mines as a young man and later taught history at the University of Montana, had been the Senate leader for more than a decade. Mansfield’s low-key, even handed, non-partisan leadership style — he insisted on the equality of every senator — had been criticized early in his tenure, but the critics came around to acknowledge the wisdom of his approach and he became universally respected for his fairness and integrity. Mansfield knew the Senate and the senators, and he revered the institution of the Senate.

In the wake of Joe Biden’s personal tragedy, Mansfield set out to convince Biden that he simply must serve, leading Mansfield’s biographer, Don Oberdorfer, to conclude that Biden “would never have sat in the Senate without Mansfield’s intercession.”

Biden had already contacted Delaware’s governor encouraging him to begin to think about who he would appoint to replace Biden when Mansfield launched his offensive. “Mansfield would not give up on me,” Biden wrote. “He kept calling to check on me,” even invoking Biden’s late wife who had enthusiastically supported his political ambitions. Mansfield said he knew Neilia would want Biden to serve.

Mansfield pressed his case by insisting that he needed Biden to take a seat on the Democratic Steering Committee, the group that determines committee assignments. Such a position for a newly elected senator was unheard of. Mansfield offered a compromise of sorts, pressing Biden to commit to serve at least six months while the majority leader worked to organize the Senate, a compelling if not completely true argument since Democrats enjoyed a comfortable majority without Biden’s vote.

“Senator Mansfield was relentless,” Biden wrote. “He called the hospital every day to tell me he needed me in the Senate and to keep me up to date on Steering Committee business.” Biden, spending days at the bedside of his sons — four-year old Beau was in a body cast and three-year old Hunter had a severe concussion — was initially unmoved by Mansfield’s appeals, saying, “What did I care now?” But Mansfield kept calling.

There was jockeying for a coveted seat on the Finance Committee, Mansfield told the senator-to-be, and Biden could be the deciding vote. “What the hell did I care about the Senate Finance Committee,” Biden would recall years later, yet “Mansfield still wouldn’t quit.”

Under this onslaught from the majority leader, Biden finally and grudgingly made a six-month commitment to the Senate, but also told Mansfield he would not leave his sons in the hospital in order to travel to Washington to be sworn in. Mansfield had an answer for that. He sent his top aide, Francis Valeo, the secretary of the Senate, to Wilmington to administer the oath of office to Biden while he stood at the hospital bedside of his boys.

Mansfield then continued to work to ensure that Biden would fully commit to a Senate career, including using his influence to secure Biden a seat on the Foreign Relations Committee, a rare appointment for a freshman senator. Mansfield joining the prestigious committee early in his career helped cement his own reputation as an expert on American foreign policy and he certainly must have known how important the position would be to Biden.

And still the majority leader kept at it. “During Biden’s first year,” Oberdorfer writes in his 2003 book, “the Majority Leader arranged for the two of them to speak privately, usually in his office, for at least a few minutes every week.” Biden thought it was Mansfield’s custom to provide such attention to new members, only later learning “I was the only freshman he was talking to like this.”

While other iconic senators of the era, Hubert Humphrey for example, also displayed sympathy and offered encouragement to Biden, Mansfield became his “unseen sponsor and caring but businesslike tutor in the life and the lore of the Senate.” Mansfield never mentioned the tragedy that had scrambled Joe Biden’s life; or that because of that tragedy he understood the need to lavish time and attention on the young senator, and he became, in the words of his biographer, “the most important person in Biden’s Senate career.”

Biden would recall that Mike Mansfield, who often said he had three great loves, his wife Maureen, his state Montana, and his work in the Senate, “knew that work was the only thing that would save me.”

As President-elect Biden prepares to take office in January, he has been mocked by some for thinking that he has a chance to begin to heal the open sores of American politics. We’ve become too divided, the critics say, too partisan, too divorced from civility for such naïve notions to prevail. And perhaps the critics are correct, but Joe Biden’s experience as a young, profoundly grieving member of Mansfield’s Senate certainly shows that he understands what it is like to be on the receiving end of personal decency and genuine empathy. He understands that the personal, relationship side of politics — the decency embodied by Montana’s Mansfield — is the foundation of any possible repair of our damaged system.

Mike Mansfield’s remarkable legacy as the longest serving majority leader in Senate history is too voluminous to recount here but add to that legacy his compassion for and mentoring of a 30-year old senator who is about to become the president of the United States.

Marc C. Johnson is the author of Political Hell-Raiser: The Life and Times of Senator Burton K. Wheeler of Montana. He is working on a book on Mike Mansfield’s leadership of the Senate in the 1960’s.

Butte man arrested for felony assault with a weapon

Late Saturday morning, officers were dispatched to the 3000 block of Mammoth Drive on a report of shots being fired.

Markovich on big subdivision: 'We are hoping to break ground in April'

After numerous obstacles and delays, construction on Copper Fox Estates —the biggest housing addition in Butte in a decade — could begin in a …

Hundreds of people 80 and older have signed up for a Phase 1B COVID-19 mass vaccination clinic offered from 9 a.m. to 3 p.m. Wednesday in the …

A Butte mental health counselor is trying to withdraw her guilty pleas to two felony counts of Medicaid fraud, saying she was emotionally frag…

The next COVID-19 Phase 1B vaccination clinic scheduled for Wednesday, Jan. 27, at the Butte Civic Center is being scaled back due to low vacc…

Joe Biden, center, takes the oath of office on Jan. 5, 1973, next to the hospital bed of his 4-year-old son Beau Biden. Biden was sworn in as Delaware's U.S. senator by Senate Secretary Frank Valeo, Mike Mansfield's top Senate aide, left, in a Wilmington hospital following a car accident that killed his wife, Neilia, daughter Naomi and injured his two sons.