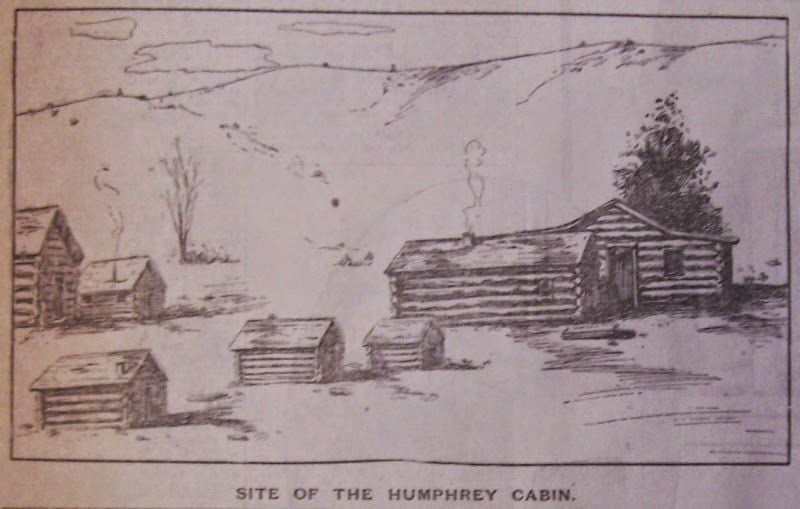 Drawing of cabins : from “The Story of Butte,” special issue of The Butte Bystander for April 15, 1897 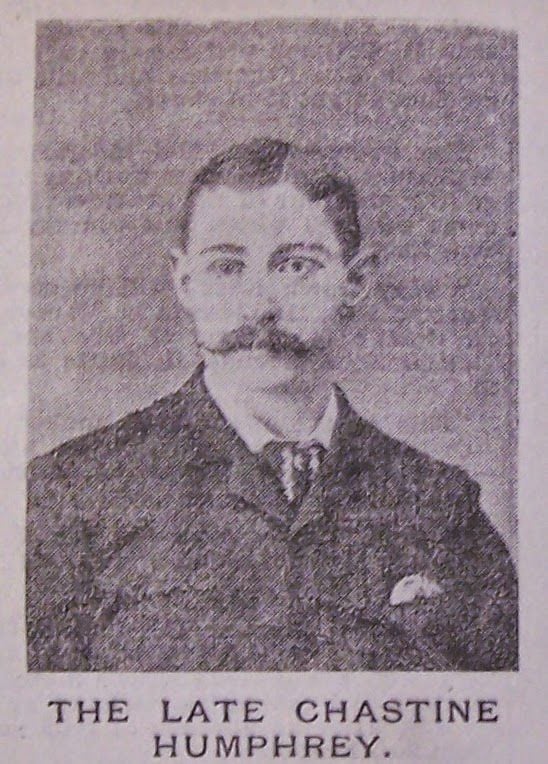 The first boy born in Butte, Chastine Humphrey, was born April 16, 1868, in a three-room log cabin beneath the shade of a fir tree – the only tree in the townsite of Butte. The cabin stood on West Quartz Street at the later site of the Maryland Boarding House, which was located at 21 West Quartz, the parking lot immediately west of the Fire Station, today’s Archives building.

Chastine Humphrey Sr., the boy’s father, laid out the townsite of Butte in 1866. The senior Humphrey’s brother, Oliver, passed through the Butte area in the early 1860s but ultimately settled in Helena. He wrote to his brother encouraging him to come to Montana, and in late 1864, Chastine, his wife and daughter (later Mrs. Nell O’Donnell of Walkerville) arrived in Butte. Mrs. Humphrey was reportedly the first woman in Butte.

Of the cluster of cabins Humphrey built, only one was still standing in 1901, just east of the then-new fire station. That log cabin served as a barn and stable for Gilmore & Salisbury’s stagecoach horses. Further east, another small cabin had been built by Ben Kingsbury. The 3-story Kingsbury Block was built about 1887 on the northwest corner of Quartz and Main, where it stood until it was demolished in the Model Cities program in 1969-70.

Also in 1868, William Matthews and Bryan Irvine shared a cabin just a bit east of the Humphrey buildings. Matthews committed suicide by jumping from a window at the Insane Asylum at Warm Springs. Irvine was still in Butte 30 years later, living at 643 West Granite Street in 1895.

Other residents in the 1860s in this block of Quartz Street included A.W. Barnard, on the south side of the street. The story went that when W.A. Clark first came to Butte, he spent his first night here in Barnard’s cabin. Barnard, like Kingsbury, became quite wealthy, and built the Barnard Block on the site of his original cabin, extending from Quartz to Granite Street.

The tree that sheltered the Humphrey house, the last one in the area, finally “yielded to the axe and fell like the gallant soldier on the field of battle, after all hope had gone.” The Humphreys burned the wood in their fireplace and kitchen stove.

Chas Humphrey, the son, took a job with the Butte Miner newspaper in 1879, at age 12. He eventually became a member of the International Typographical Union, working until automated machines – Mergenthalers – replaced him in 1895. He continued in the printing profession including typesetting for the Jefferson County Zephyr, in Whitehall.

On the occasion of Chas’s death, his sister Nell O’Donnell recounted the locations of the Humphrey cabins on West Quartz.

“Our house stood where the Maryland House now stands. It has been said that it stood upon the site of the new fire station. It is true a house belonging to father stood on the fire station site, but we did not live in it. The old tree stood on the slope almost where the kitchen of the Maryland house stands.” That location was near the alley, just west of the northwest corner of the Archives building today.

Mining City History: Montana was so enmeshed in politics that statehood was all but ignored

We celebrate the proclamation of Montana’s statehood on November 8, but when it happened in 1889, there were few celebrations. The Territory a…

Drawing of cabins : from “The Story of Butte,” special issue of The Butte Bystander for April 15, 1897