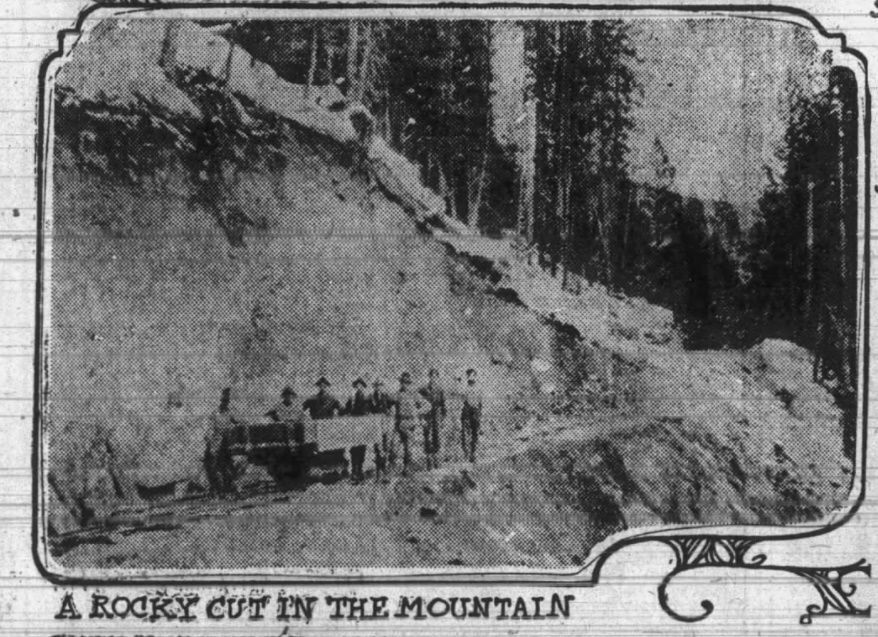 Road under construction, Anaconda Standard, 20 May 1923.

In 1919, the demanding markets of Butte and Anaconda were a “slow and expensive” distance from the fruit and vegetable growers of the Bitterroot Valley. A new road from Hamilton to Anaconda was proposed, touted by the Anaconda Standard as “a godsend to the community.”

The idea of such a route had been promoted at least since 1916, but World War I delayed any action.

The Skalkaho Pass Road was estimated to cost $102,000 in 1919, and a bill carried by state Senator James Gnose of Anaconda was passed that year and signed by Governor Stewart to authorize counties to raise money to pay for the road. Voluntary contributions from Hamilton citizens raised $7,200 and Ravalli County authorized $10,000. Promoters hoped that the state highway commission would come up with $25,000 and that the entire operation would benefit from a federal appropriation of $50,000,000 for state highways.

A route had been surveyed by the U.S. Forest Reserve several years earlier, but the 1919 proposal for a 32-mile road was 10 miles shorter. A detailed survey began in June 1919 under the leadership of S. W. Hoffman of Hamilton but wrangling over the exact route and lack of funding delayed work until 1922.

The Forest Service allocated $110,000, combined with an additional $90,000 in post road funding. Ravalli County’s contribution had reached $100,000 in bonds, all purchased outright by Mrs. Marcus Daly, so the total cost was close to triple the 1919 estimate.

According to the Granite County History blog, Frank Monty and a crew of 600 began construction in May 1922, expecting to complete the work by late summer, but the road was not finished and open until June 21, 1924, when 400 people in 87 cars inaugurated the highway. The tour was promoted as one of the longest trips by auto caravan in this part of the country and included a “trouble car” to help in case of break downs.

The “Skalkaho expedition” was to be led by A.W. Stephenson in his airplane, but “atmospheric disturbances” forced him to return to Missoula. He eventually landed in a field between Rocker and Silver Bow Junction. Drivers, accompanied by hundreds of motorists from Anaconda and Butte, entered Butte and drove to the YMCA on Park Street and proceeded to the new Finlen Hotel, then less than a year old, for a dinner and dance, accommodating the greatest number of people seated in the banquet room to that point.

The Intermountain Transportation Company also began regular bus service between Anaconda and Hamilton. The daily trip across the “Wonder Way” took four hours each way. They advertised it as the “Greatest One-Day Ride in America.”

The number of grocery stores in Butte declined precipitously from at least 201 in 1918 to 35 in 1979. One of the long-term survivors was the C…

By most accounts, significant placer gold was first discovered in the Butte area on July 13, 1864, by Barker and party. There’s a monument on …

Major League Baseball is often considered to have begun with the first National League game in Philadelphia in 1876. There’s little doubt that…

Road under construction, Anaconda Standard, 20 May 1923.