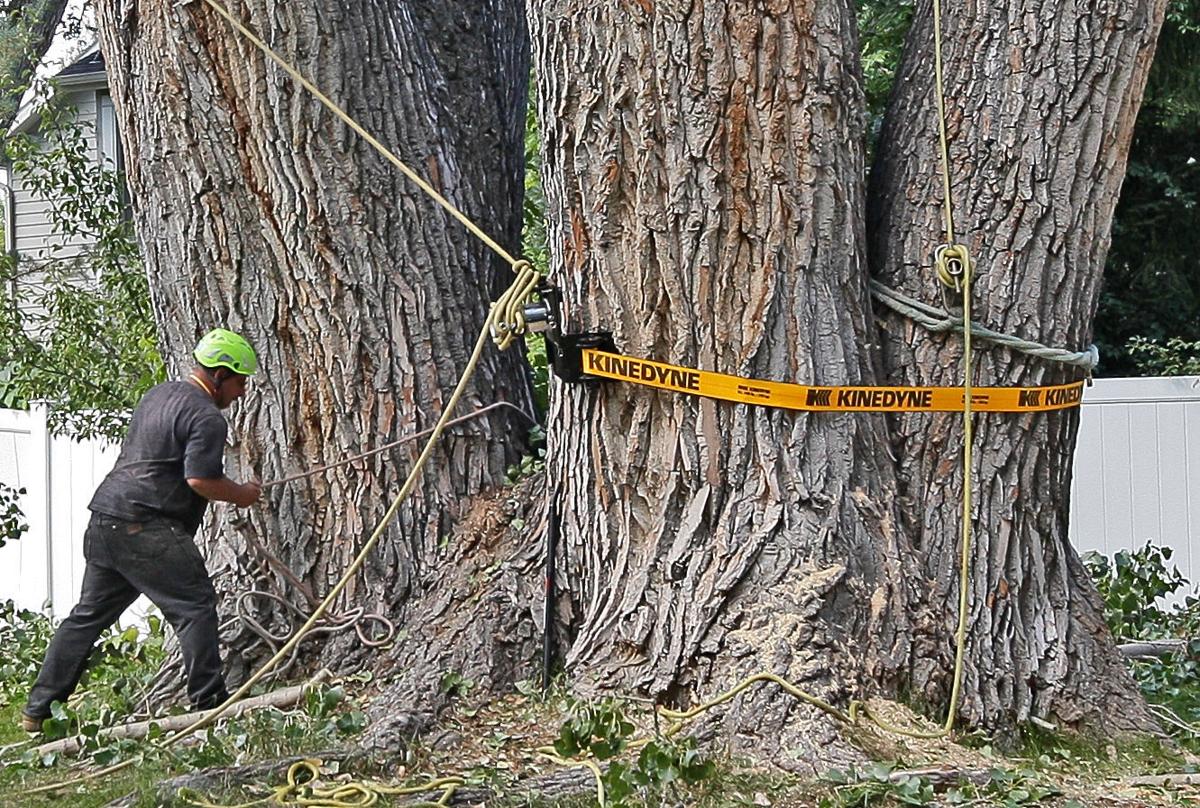 Yellowstone Valley Tree Surgeons’ Paul Siegfried is dwarfed by the giant trunk of a cottonwood tree at 2205 Tree Lane, Billings, Sept. 4. The 90- to 100-foot-tall tree, once one of the largest in the state, has been cut down. 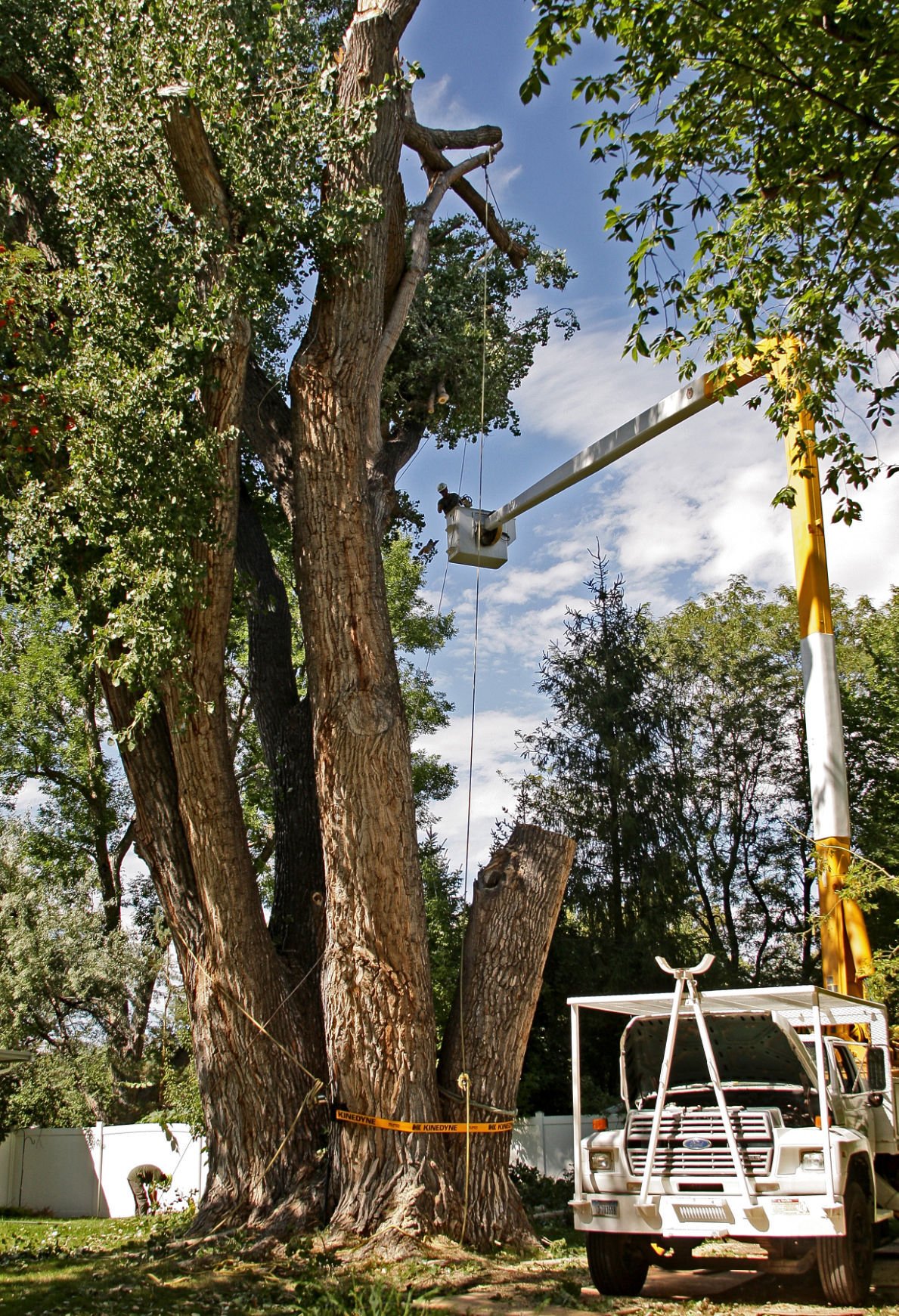 Yellowstone Valley Tree Surgeons’ workers show the size of a giant cottonwood tree at 2205 Tree Lane, Billings, Sept. 4. The 90- to 100-foot-tall tree, once one of the largest cottonwoods in the state, has been cut down.

Matt Hudson for The Montana Standard

BILLINGS — A 105-foot cottonwood tree that was cut out of a Billings backyard recently might have some life left in it.

When news of the tree’s demise reached Marty Flanagan, he knew he wanted a piece. For decades, Flanagan has courted Montana’s largest and oldest trees for their cuttings.

“They’re my favorite tree,” he said of the cottonwood variety, “and they’re cloned fairly easily because you can rip the cuttings.”

A former rancher who lives in Dean, Flanagan has worked seriously with trees since the 1980s. His goal is to build repositories for the best tree genetics so that they can be cloned and replanted locally.

Because a lot of newer nursery trees have been cross-pollinated many times over, they tend to decrease in longevity. As some of Montana’s oldest trees near the ends of their lives, Flanagan hopes to keep those genetics alive with the help of partner nurseries.

A cottonwood taller than 100 feet is rare in southeastern Montana, he said, and that’s what drew him to this latest specimen. The property owner on Tree Lane contracted to cut down the tree because it had weakened and partially blew over in a wind storm.

Flanagan said he first “met” that tree in 2001, when he was just starting to collect specimens.

“I was, at that time, totally focused on the champions — the trees that were in the record books,” he said.

Champion status is an official designation given to the largest tree in each species. A register is kept nationally by the American Forests organization. Montana has been home to past and present champion trees. According to the 2015 register, the state is home to six champion trees, including the largest plains cottonwood in Ravalli County.

Flanagan has since worked with various nurseries to save the best of the best foliage Montana has to offer.

Clones in the works

One organization Flanagan works with operates just 40 miles west of Billings. The Special K Ranch maintains about 60,000 square-feet of greenhouses on its grounds. About a quarter of it is dedicated to raising native plant species in partnership with the federal Bureau of Land Management.

The goal is to repopulate local land with the native species, such as certain types of sagebrush. That also includes native tree varieties like the Tree Lane cottonwood. Flanagan picked up some choice trimmings from the top of the tree and brought them to the ranch.

“He just came by that evening, no pre-warning or anything, and had some big garbage bags of cuttings,” said Marvin Schieldt, program director for the Special K Ranch.

The ranch will try to plant the cottonwood cuttings at its facility, which also fosters some champion tree specimens. Last year, 100 clones from the ranch were acquired by the Billings Parks and Recreation Department and planted at Coulson Park.

Those clones came from a massive cottonwood in Joliet, which was once crowned a champion.

Next week, a group from Pompeys Pillar will bring a group of trees out to the site. Those were cloned from another large tree in Big Timber.

Cuttings from the Tree Lane cottonwood will add to the strong genetic legacy that the Special K Ranch is amassing. And the inventory is tended by the ranch residents, who have developmental disabilities and live there full time.

Schieldt said that the residents really enjoy taking care of the trees. They’re taking care of a select group of specimens, not churning out trees in bulk.

“This is a little bit more of a hands-on, personal touch,” he said. “Because you can’t do these by the hundreds of thousands.”

The best time to get a clone to take root in the soil would have been the springtime, when plants naturally become active for the growing season. But Flanagan and the Special K Ranch are giving the Tree Lane cottonwood multiple shots at another life.

The cuttings were distributed to four sites, Flanagan said. In addition to the ranch, they were sent to a nursery in Oregon, the Bridger (Montana) Plant Materials Center, and to the Archangel Ancient Tree Archive in Michigan.

The Michigan organization also works to collect and replant choice trees from around the nation.

“We’re going to give it a go and see how things work out,” Flanagan said. “I have a good feeling about the tree.”

When Flanagan first visited the Tree Lane cottonwood 14 years ago, he didn’t collect any cuttings because it didn’t make champion status. There are certain criteria for champions, tied to a points system. Flanagan said the tree was too multi-stemmed.

But with so few 100-plus-foot trees in the area, he knew that it had to be collected. The tree removal process was the perfect opportunity to restart the native plant somewhere else nearby.

“That’s kind of what it’s all about,” Flanagan said, “is keeping these trees at home.”

That was especially moving for Mark Runnalls, a 25-year Tree Lane resident. He was a close friend of the previous property owner, Billings attorney and artist Jim Haughey. Runnalls marveled at the tree for years and said that Haughey cared for it greatly.

As crews took on the week-long job of removing the large cottonwood, Runnalls said people came out of the woodwork to see it. It was in part a tribute to Haughey, who died in 2007.

One of the visitors was Flanagan, who collected the cuttings and hauled them away with the possibility of new life.

“He’s going to make sure that tree goes on, which is just wonderful,” Runnalls said. “I’m so happy about that.”

Yellowstone Valley Tree Surgeons’ Paul Siegfried is dwarfed by the giant trunk of a cottonwood tree at 2205 Tree Lane, Billings, Sept. 4. The 90- to 100-foot-tall tree, once one of the largest in the state, has been cut down.

Yellowstone Valley Tree Surgeons’ workers show the size of a giant cottonwood tree at 2205 Tree Lane, Billings, Sept. 4. The 90- to 100-foot-tall tree, once one of the largest cottonwoods in the state, has been cut down.