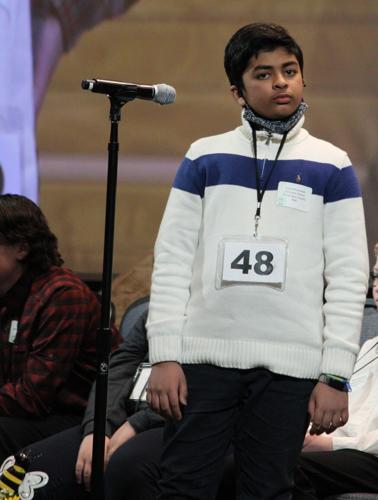 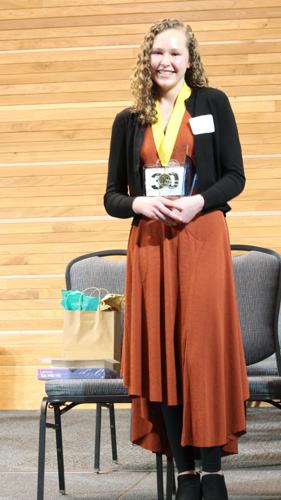 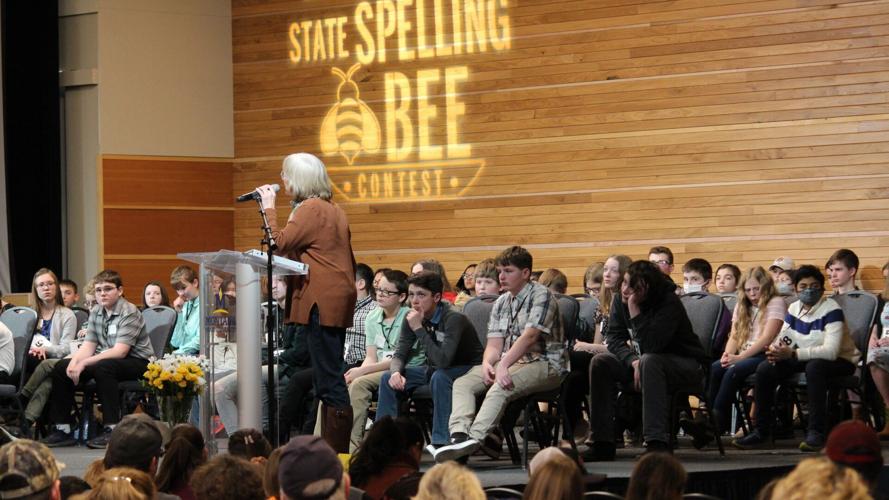 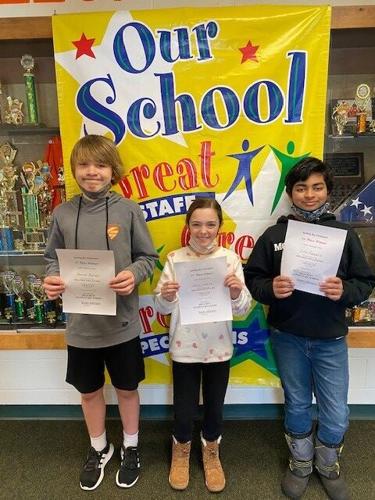 From left, Gunnar Benson, Keely Janecke and Indro Pramanik posing with their certificates after being finalists in the Hillcrest Spelling Bee.

Pramanik competed against 56 other Montana fourth- through eighth-graders in Ballroom A of MSU’s Strand Union Building, who won out of a pool of 48,000 potential spellers, said Gallatin Superintendent of Schools Matthew Henry, who introduced the event.

Pramanik got out in the fourth round on the word “axiomatic” after successfully spelling the words “postural,” “tai-chi” and “dissipate.” His father, Brahmananda Pramanik, said that his son knows lots of words and is good at spelling because he loves to read.

“He says reading books is playing with words and making them friends,” Brahmananda Pramanik said of his son.

The bee was held in Bozeman after being held in Billings for 10 years. It was originally supposed to be held in 2020, but was canceled due to COVID-19. The 2021 Treasure State Spelling Bee was held online as a proctored test.

Pramanik won first place in the Hillcrest Spelling Bee Feb. 11, competing against 11 Hillcrest fourth-, fifth- and sixth-graders, according to a Hillcrest School newsletter.

Fellow Hillcrest students Keely Janecke and Gunnar Benson earned second and third place, respectively, making them first and second alternate in the event Pramanik was unable to compete at the state bee.

Usually, the county bee is held in the auditorium of Montana Technological University, Maloney said, and she and the other organizers felt it was too likely COVID might spread if around 60 students from all the different schools got up on stage together.

Because of this, the Silver Bow County schools that paid the fee to Scripps could hold school spelling bees to send someone to state, and Hillcrest was the only school that did that, Maloney said.

After 20 rounds and almost three and a half hours, Missoula County eighth-grader Ellette Whitcomb from Sussex School came out the victor of the bee, spelling two words in a row correctly to secure her win, the last of which was "phosphorescent."

One of the words Whitcomb successfully spelled in the final rounds was "phlebotomy," which she said she studied a lot because “it was one I continuously got wrong,” she said. “So when it came up, I was like, ‘Oh, I know this one.’”

She described the win as “unreal.”

“I definitely wasn’t expecting it,” Stonehocker said of making it so far in the competition.

Whitcomb will go on to compete in the 2022 Scripps National Spelling Bee in National Harbor, Maryland to win over $50,000 in cash and other prizes.

Butte native Gabrielle Antonioli is Glacier National Park's first female avalanche forecaster. She and colleagues keep an eye on avalanche potential along the Going-to-the-Sun Road to try to protect workers plowing the road.

The annual Burgman/Boyle Cribbage Tournament, a scholarship fundraiser, will take place on Sunday, May 22, at the Knights of Columbus, 224 W. …

There’s a saying here in Big Sky Country — "If you don't like the weather in Montana, wait 20 minutes." Okay, that may be a bit of an exaggera…

Report: Millions forced into extreme poverty while the ultra-rich profited from the pandemic

Report: Millions forced into extreme poverty while the ultra-rich profited from the pandemic

Starbucks joins McDonald’s and other companies in Russian exodus

Starbucks joins McDonald’s and other companies in Russian exodus

From left, Gunnar Benson, Keely Janecke and Indro Pramanik posing with their certificates after being finalists in the Hillcrest Spelling Bee.