Ian Fairweather operates a drone that is specially designed to haze waterfowl that land on the Berkeley Pit. 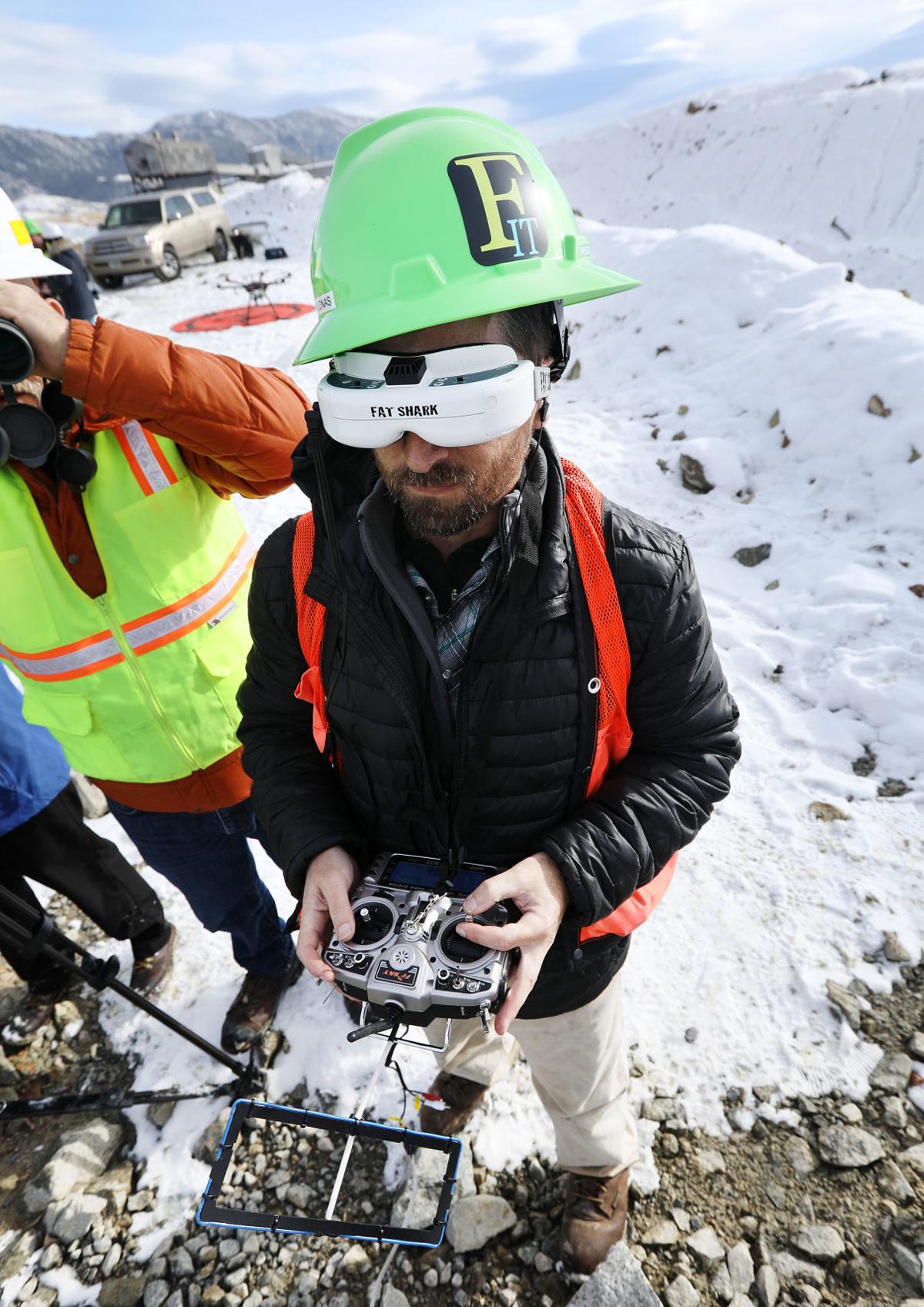 Jim Jonas, a contractor for Montana Resources, operates the "Waterdog," a boat he designed to haze waterfowl that land in the Berkeley Pit water.

On Friday afternoon, Ian Fairweather, president of Fairweather IT, remotely navigated a six-propeller drone his company designed and built toward an exhausted snow goose that had recently landed on the placid, reflective water of the Berkeley Pit.

But the snow goose resisted the attempts to be hazed from the toxic, artificial lake, swimming away from the drone but refusing to take flight.

“What this is maybe suggesting is that the bird is really exhausted,” chimed in Gary Swant, vice-chair of the Waterfowl Advisory Group, a volunteer board of experts that advises Montana Resources, Atlantic Richfield and other stakeholders in ways to prevent bird deaths on the flooded former open-pit mine on Butte’s east side. “He’s just not interested in moving, so I would just say back off.”

Instead, one of Fairweather’s colleagues sent another high-tech bird-hazing device into the pit: a little remote controlled fan boat equipped with a camera and nicknamed the Waterdog, since builders hope it can be used to not only move birds off the pit water but also retrieve those that die, like a waterdog would.

While the drone and boat operators were zealous in hazing the goose and four other birds — common goldeneye ducks — on Friday, they did so as part of demonstration of the new technology.

Normally, Montana Resources employees who detect waterfowl in the pit give them a few hours to rest before trying to encourage them to move on, according to Mark Thompson, the company’s vice president for environmental affairs.

Any sooner than that, he says, and the efforts are counterproductive, as the birds are too tired to fly on and as the more tired a bird is the more prone it is to the effects of the pit’s toxins.

And according to Swant, a few hours isn’t long enough to threaten the health of a bird.

But, he added, “I would start getting concerned if you couldn’t get the bird off in eight to 12 hours.”

That gives MR employees a window of time to haze them away, and the company has an arsenal of measures to choose from to do so.

There are high-tech options like the drone and the remote-controlled boat, but there are also low-tech alternatives such as rifles, spotlights and fireworks timed to explode before hitting the water’s surface. And there are methods that mix the two, old and new. The drone, for example, is equipped with a mechanism that allows operators to drop water balloons or bags of stones near — but not on — birds to goad them into moving along.

Jeremy Fleege, an MR environmental engineer, showed off some of those tools and explained the nuances of their use Friday, in the so-called Bird Shack overlooking the pit. After showing off a handheld laser used to spot birds, he explained some of the nuances of the more than 45 species that are prone to land on the pit’s 450-acre surface.

According to Swant, those techniques have been largely successful since an estimated 3,000 to 4,000 geese perished in the pit in December 2016. Though MR has run a bird-hazing program since 1996, the 2016 die-off sparked a renewed effort to come up with a science-based approach to keep migratory waterfowl away.

Birds continue to land on the water, Swant says, but with the new tools and more systematic approach only a “very, very low percentage of birds die.”

Last spring, hazing efforts had a 99.7 percent success rate, according to Swant, with only 12 birds dying out of the thousands that landed.

Swant believes that thousands of birds could land in the pit again, if the conditions that occurred in late 2016 are repeated, but he thinks another major die-off is unlikely.

“I think we’ve got the skills now to get them off the water,” he said.

And those who are involved in the expensive and expansive program to keep waterfowl away have other projects in the works.

As for Friday’s afternoon's lone snow goose, the new boat and drone did eventually work: the exhausted bird didn’t manage to take flight for a new body of water, but he did find his way to the Berkeley Pit’s shore, to rest.

Watch Now: How will Biden’s Environmental Protection Agency be different?

Watch Now: How will Biden’s Environmental Protection Agency be different?

Brian Tesson said he cannot recall a time of greater turmoil for the Anaconda school district.

Man who threatened Butte officers and their families pleads guilty

You can say goodbye to most of Civic Center Road in Butte for at least the rest of this year, but in the end, the city will have a new-and-imp…

Butte Police Officer Nick Butorovich had a good reason to wear his dress blues Friday. He accepted honors from from a United States senator.

Organizers of next Wednesday’s COVID-19 vaccination clinic announce that more than 1,000 registration slots are being opened for the clinic at…

Ian Fairweather operates a drone that is specially designed to haze waterfowl that land on the Berkeley Pit.

Jim Jonas, a contractor for Montana Resources, operates the "Waterdog," a boat he designed to haze waterfowl that land in the Berkeley Pit water.