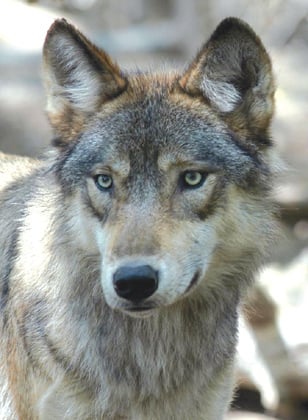 In the Hunt by Nick Geovck

"Conserva-tion is a state of harmony between men and land. By land is meant all of the things on, over, or in the earth. Harmony with land is like harmony with a friend; you cannot cherish his right hand and chop off his left. That is to say, you cannot love game and hate predators."

Let's kill every wolf in Montana.

Sounds like a popular idea these days among hunters.

While we're at it, let's kill every grizzly bear, every black bear and every mountain lion. Throw in golden eagles, bald eagles, rattlesnakes and coyotes.

We'd be left with a hunter's paradise - a state teeming with game animals and hunting opportunity, right?

That's the sentiment I heard recently at a meeting on the hunting season setting proposals in Butte, where an oft-angry group of sportsmen called for large-scale killing of predators to increase the number of deer, elk and other game species. The suggestions ranged from having government trappers shoot wolves from helicopters to creating a season on eagles so they don't kill mountain goats.

Of course Butte sportsmen aren't alone. Over the past few years anger has been building blaming predators - and in particular wolves - for lower game herds and for less hunting opportunity. Wolf haters throw around words like "annihilation" and "devastation" when it comes to Montana's deer and elk herds. And even some respected conservation groups have gotten in on the wolf bashing through public statements decrying the effects of predators.

What state are these people living in?

Here are a few facts about Montana's wildlife populations and hunting over the past two decades, covering the period during which the much-maligned western gray wolf has been on the landscape.

In 1992, three years before wolves were reintroduced into Yellowstone National Park and central Idaho, the Montana Department of Fish, Wildlife and Parks official estimate of the elk herd was 89,000 elk in Montana. Today we have a statewide estimate of 150,000 elk.

In 2003, the state Legislature passed a bill that required FWP biologists bring elk numbers down to the targeted objective populations laid out in the statewide elk plan. They were responding to complaints from ranchers about too many elk on their private land.

Ironically, some of the same lawmakers who supported that bill are among the most vocal wolf bashers. That hypocrisy begs the question: are there too many elk or too many wolves in Montana?

Anyway, the Legislature in recent years has given FWP several tools to kill more elk, including giving hunters the chance to kill two elk per year.

And since then, Montana has on three occasions extended the general elk season to give hunters two additional weeks to kill elk in years when the harvest was slow.

In truth, elk hunters have had more opportunity than in decades and now we've seen the effects of that.

Over the past couple years we've brought elk back down closer to the target populations or in some cases dropped it below those objective numbers. Accordingly, FWP biologists have gone from liberal to more conservative seasons, allowing fewer cow elk to be killed in many areas and reducing the second tags.

It proves that two-legged predators with high-powered rifles can be extremely effective at killing elk.

Now clearly wolves and other predators have had a hand in bringing down some of Montana's elk herds. People often cite the herd in the northern end of Yellowstone National Park, which topped in the mid-1990s at 19,000 animals and has dropped by more than 60 percent.

What often gets left out of the argument from wolf haters is whether that was a sustainable number of elk that was healthy for the land. It wasn't, and biologists cannot manage wildlife populations for their highest population every year.

And I'd assert that the large turkey shoots on elk just north of the Yellowstone boundary near Gardiner, where hundreds of elk would come out at a time, was a quality elk hunt that was good for the image of hunting.

Do wolves, bears, mountain lions and other predators kill game? Of course they do, and they should be managed to sustain and yet control their populations using sound science, not hysteria.

In the early 20th century, we tried predator control as a cure-all to boost game numbers. It failed, because it didn't take into account the myriad of factors that go into sustaining healthy wildlife numbers.

We only need to look to the father of modern wildlife science - Aldo Leopold - to remember that conservation is much more complicated than killing predators en masse.

I have lived to see state after state extirpate its wolves. I have watched the face of many a newly wolfless mountain, and seen the south-facing slopes wrinkle with a maze of new deer trails. I have seen every edible bush and seedling browsed, first to anaemic desuetude, and then to death. I have seen every edible tree defoliated to the height of a saddlehorn. Such a mountain looks as if someone had given God a new pruning shears, and forbidden Him all other exercise. In the end the starved bones of the hoped-for deer herd, dead of its own too-much, bleach with the bones of the dead sage, or molder under the high-lined junipers.