This medallion, nearly 2 feet tall, is one of four on the Napton Apartments building. Each medallion is a numeral that indicates the year it was built — 1906. 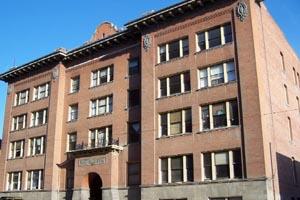 Photos courtesy of Dick Gibson The Napton Apartments at 25 E. Granite represents the many large structures erected in Butte during 1906. The year is commemorated in the four masonry medallions across the upper facade.

Editor's note: The following is one of a series of columns from the Butte Citizens for Preservation and Revitalization.

1906 was a watershed year in Butte — the end of the War of the Copper Kings.

When Augustus Heinze sold most of his holdings to the Amalgamated Copper Co. (later to become Anaconda), more than 100 lawsuits were settled. This cleared title to millions of dollars in land ownership. And the building boom was on.

With a county population exploding from fewer than 50,000 in 1900 to at least 85,000 in 1917, Butte needed more and bigger of everything, from apartments and churches to office buildings. Butte produced some of the grandest buildings in its history in a brief period from 1906 to 1908.

Granite Street must have been in a near-perpetual state of disarray in 1906, as huge structures were erected from the Leonard Hotel on the west to the Thornton Hotel Addition on the east, near Wyoming Street. Between them, the Silver Bow Club, Carpenters' Union Hall and Telephone Company (later the Water Company) joined the list of "under construction" places in 1906-07.

A new "labor temple" at 128 W. Broadway and the Buol Building at 132 W. Broadway appeared in 1906-1908. The distinctive green and white Moorish appearance of the Butte Floral Co. at 27 W. Broadway is another 1906 addition. First Baptist Church, Broadway and Montana, was erected in 1907-08 to replace a smaller first- generation church on the same site.

One of Butte's most significant and prestigious structures, the Metals Bank skyscraper at Park and Main, was completed in 1906, while just down the street the Phoenix Building was rising from the ashes of the "million dollar fire" that destroyed the previous Symon's Department Store on Sept. 25, 1905.

South of the main business district, Madame Marie Paumie had the St. Francis Apartments built at 110 S. Dakota in 1906, adjacent to her cleaning establishment (now the Post Office at Dakota and Galena).

The legacy of a century-old building boom is with us today — as treasures in architecture all over Uptown Butte.

Dick Gibson is secretary and webmaster for Butte Citizens for Preservation and Revitalization. For more information about CPR, visit www.buttecpr.org or stop by the office on Thursdays from 10 a.m. to 2 p.m., 405 W. Park St., Suite 200.

Butte-Silver Bow health officials announced Thursday that there is community transmission of the novel coronavirus, meaning they can’t trace w…

DILLON — The Bear Creek Fire, located in the Lemhi Pass area on the Dillon Ranger District of the Beaverhead-Deerlodge National Forest, has sp…

This medallion, nearly 2 feet tall, is one of four on the Napton Apartments building. Each medallion is a numeral that indicates the year it was built — 1906.

Photos courtesy of Dick Gibson The Napton Apartments at 25 E. Granite represents the many large structures erected in Butte during 1906. The year is commemorated in the four masonry medallions across the upper facade.
© Copyright 2020 The Montana Standard, 25 West Granite Street Butte, MT | Terms of Use | Privacy Policy
Powered by BLOX Content Management System from TownNews.com.
You don't have any notifications.