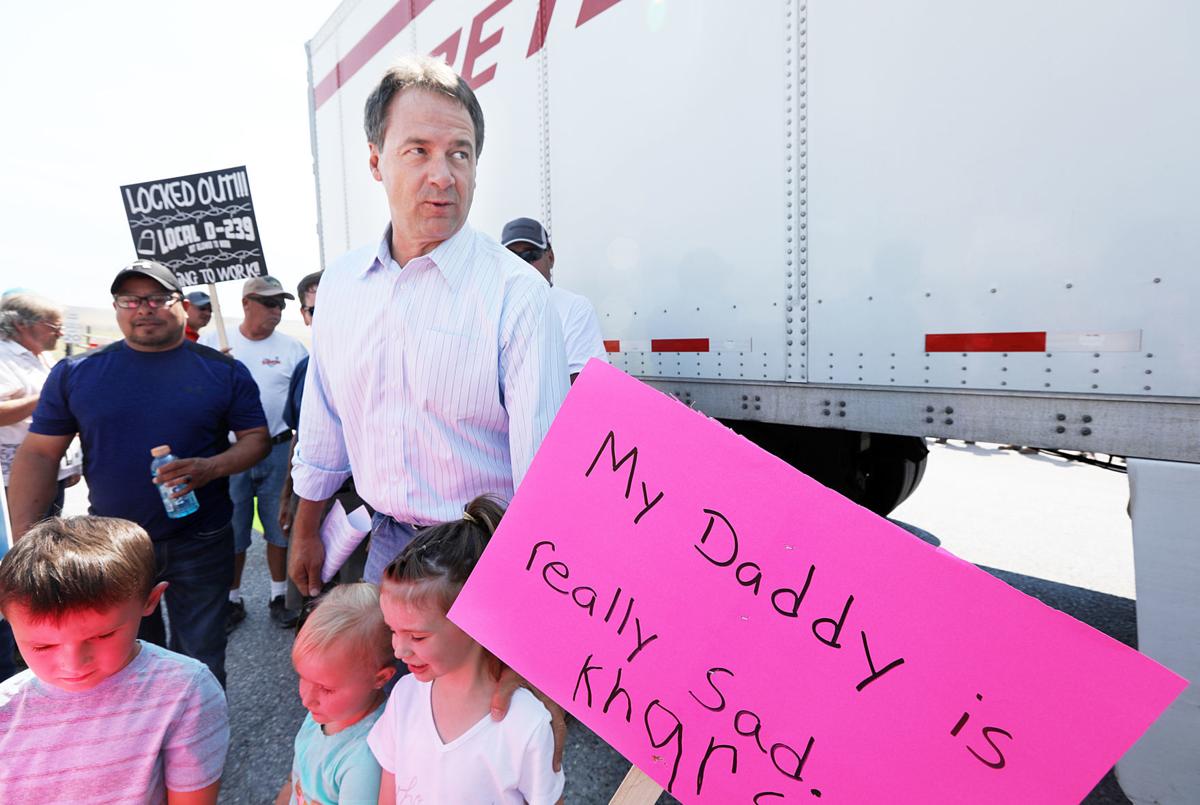 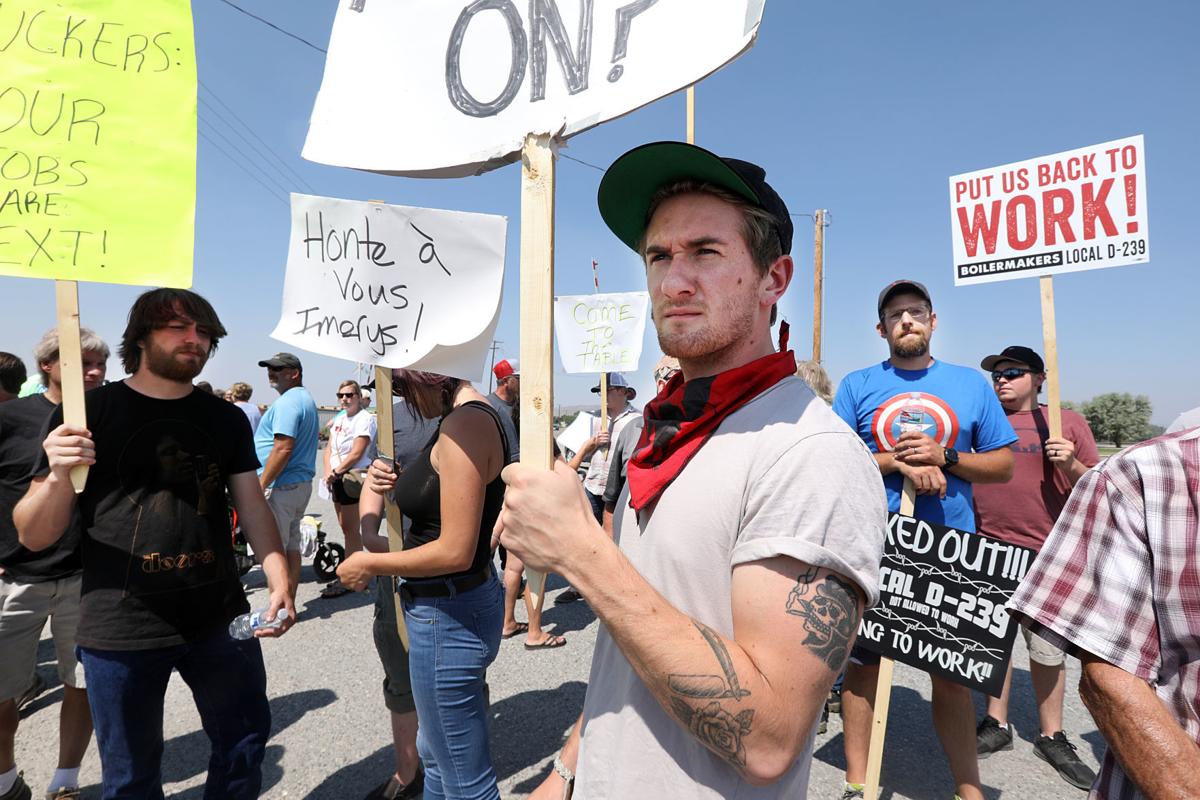 Tyson Gerheart, a member of Industrial Workers of the World, stands on the picket line with members of the International Boilermakers Union Local D-239 on Thursday afternoon at Imerys Talc America in Three Forks.

On Thursday afternoon, Gov. Steve Bullock pulled up before the gates of Imerys America’s talc-milling plant in Three Forks and spent more than an hour lending his support to a group of 35 unionized plant employees who have been locked out of their jobs since Aug. 2, when contract negotiations between the company and the International Brotherhood of Boilermakers’ Local D-239 broke down.

Speaking before a crowd of workers, members of their families, and other sympathetic parties, Bullock implored workers to “stand strong.”

“All of you’ve worked damn hard for this company, long before this owner came in, and none of you are asking for anything more than a good-faith shake,” said Bullock, a Democrat. “From everything I’ve heard, you ain’t got it.”

While Bullock acknowledged he is unable to intervene in the dispute between the company and the union, he said his hope was that the parties would come back to the table and begin to negotiate again in “good faith.”

“As governor, I don’t have the power to make them come back to the table,” Bullock said. “But I would hope that they would listen to not only my ask, not only folks like Senator (Jon) Tester’s ask, but, more than us, the ask of employees who have dedicated their lives to this company.”

Randy Tocci, president of Local D-239 and a lead warehouseman in the Three Forks mill, said public support from politicians like the governor would be crucial to bringing about a resolution to the contract dispute.

“My feeling is, the only way we’re going to get them to come back to the table is political pressure, because they don’t give a rat’s ass about us,” Tocci said. “They’ve showed it.”

In an emailed statement, an Imerys America spokesperson rejected the idea that politicians’ involvement would be effective and said the company has already listened extensively to the union workers.

“The Three Forks plant continues to work efficiently and effectively to meet our customers’ needs while our final fair and reasonable offer to the Boilermakers — reached after nearly 3 months of negotiations—remains on the table. We are disappointed that the union has failed to accept our offer and saddened to now see the union used for political means.”

While the lockout only started a week ago, Tocci said problems between the union and management have been simmering since 2011, when the France-based Imerys bought the Luzenac Group, a suite of three Montana properties, from the multinational mining company Rio Tinto. In addition to the Three Forks mill, Imerys acquired a second talc mill in Sappington and the Yellowstone talc mine near Ennis in the deal.

But Tocci said the strain came to the fore in May, when he and other union representatives sat down with Imerys officials to negotiate a new contract to replace an eight-year contract that expired that month. Rocci says those negotiations got bogged down when Imerys management asked the union to accept reductions in benefits and work rules, such as eliminating health and life insurance for retirees, freezing the benefit pension plan, allowing the company to subcontract bargaining-unit work, and requiring "employees to work in all areas of the plant regardless of the employees' level of training," according to a release from the IBB.

Members of Local D-239 rejected new contract offers from Imerys four times before they were locked out. The first two votes did not include strike authorizations and were unanimous, according to Tocci. The last two votes did contain such an authorization and faced some opposition from members, with the fourth contract offer rejected 27-8. On Thursday, Tocci connected the prospect of a work stoppage with the rise in members’ reluctance to reject the company’s offer, saying employees were “bothered” and “scared” by the prospect of being out of a job. As president of the local and a longtime employee of the mill, Tocci counted himself among those with reservations.

“I am responsible for these 35 union members,” he said. “And it’s the first time in 36 years I’ve been without a job.”

While locked-out employees have one more paycheck coming their way and a single $250 check coming from the IBB, they will be relying on unemployment insurance from the state, the generosity of donors, and help from each other until they are able to go back to work at the Imerys mill — or, if no resolution is reached, until they find work elsewhere.

In the meantime, Tocci and his fellow union members vowed to keep picketing the mill and pushing for a resolution to what he said was the first lockout in the state since 1980.

After Bullock spoke and a representative of Sen. Jon Tester read a statement that called on Imerys to “unlock its doors and get back to the negotiating table and bargain in good faith,” Tocci took a megaphone and said this kind of political pressure would be key to getting Imerys to do what Tester had demanded.

“This is how we’re gonna beat this company,” Rocci said. “And we’re gonna fight these guys till we win this.”

On Thursday afternoon, Gov. Steve Bullock pulled up before the gates of Imerys America’s talc-milling plant in Three Forks and spent more than…

Next stop: Flap over marijuana at Greeley School headed to Zoning Board

A Bozeman man accused of threatening a Montana judge and others pleaded guilty to two felony counts of stalking Thursday, but a judge won’t de…

The Goldstone Fire grew from 125 acres to about 440 acres between Tuesday and Thursday. The fire is zero percent contained.

Former Montana Tech assistant from Ghana sentenced in theft scheme; could be deported

Other riders recall fear on fair ride where girl was hurt; Montana has no safety regulations

While a young girl recovers from serious injuries after falling from a high-speed ride at the Western Montana Fair on Thursday night, a county official confirms there are no Montana state laws, or Missoula County or City of Missoula regulations concerning carnival ride safety.

Butte’s Irish festival, An Rí Rá, begins at 9 a.m. Friday and will conclude with an outdoor Mass Sunday. All musical and dance performances wi…

Amidst a nearly month-long standoff, officials from the Imerys America talc-milling plant in Three Forks and representatives of the plant’s lo…

THREE FORKS — Sen. Jon Tester climbed up onto the bed of a pickup, grabbed a bullhorn, and began to rally the crowd of a couple hundred people…

Locked-out Imerys employees to return to work after company, union come to an agreement

Tyson Gerheart, a member of Industrial Workers of the World, stands on the picket line with members of the International Boilermakers Union Local D-239 on Thursday afternoon at Imerys Talc America in Three Forks.