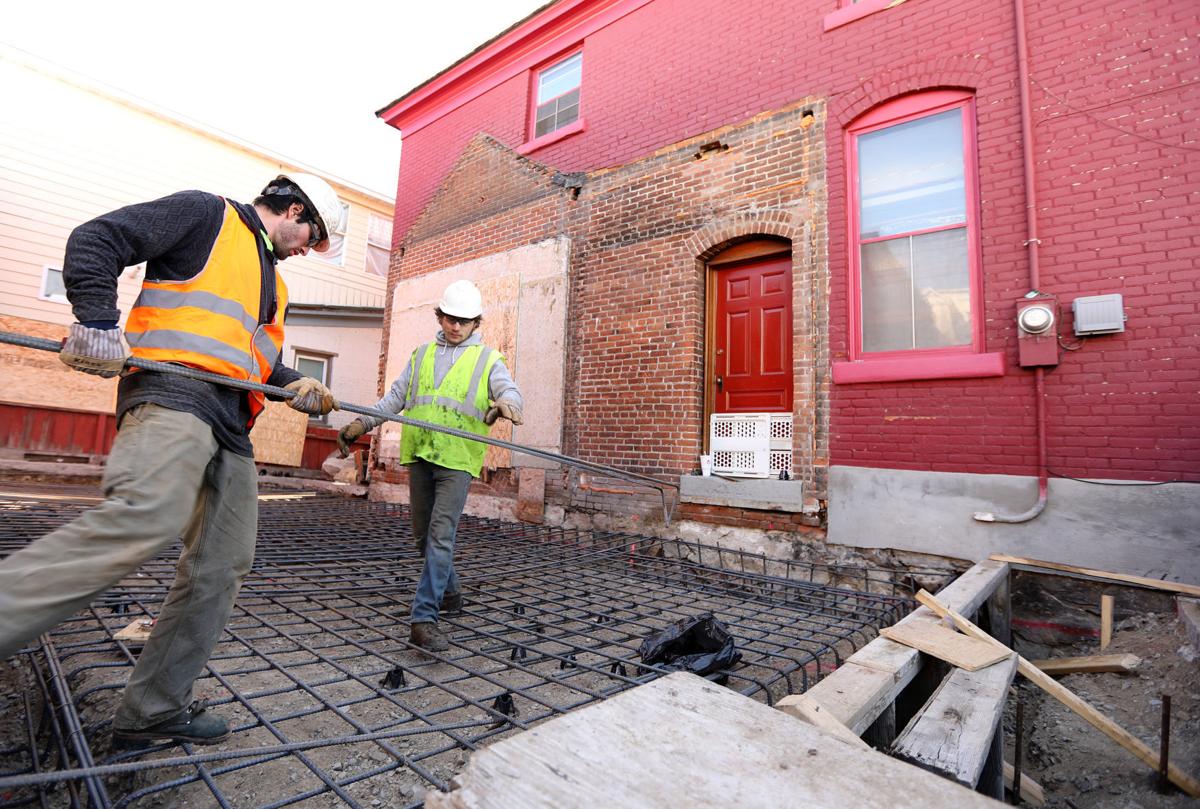 Laborers Frank Kerner, left, and Nathan Kent, with Hunter Brothers Construction haul in rebar as they finish capping the 30 -oot sinkhole from a mine shaft  that opened up earlier this year behind a home on Broadway Street in Butte. 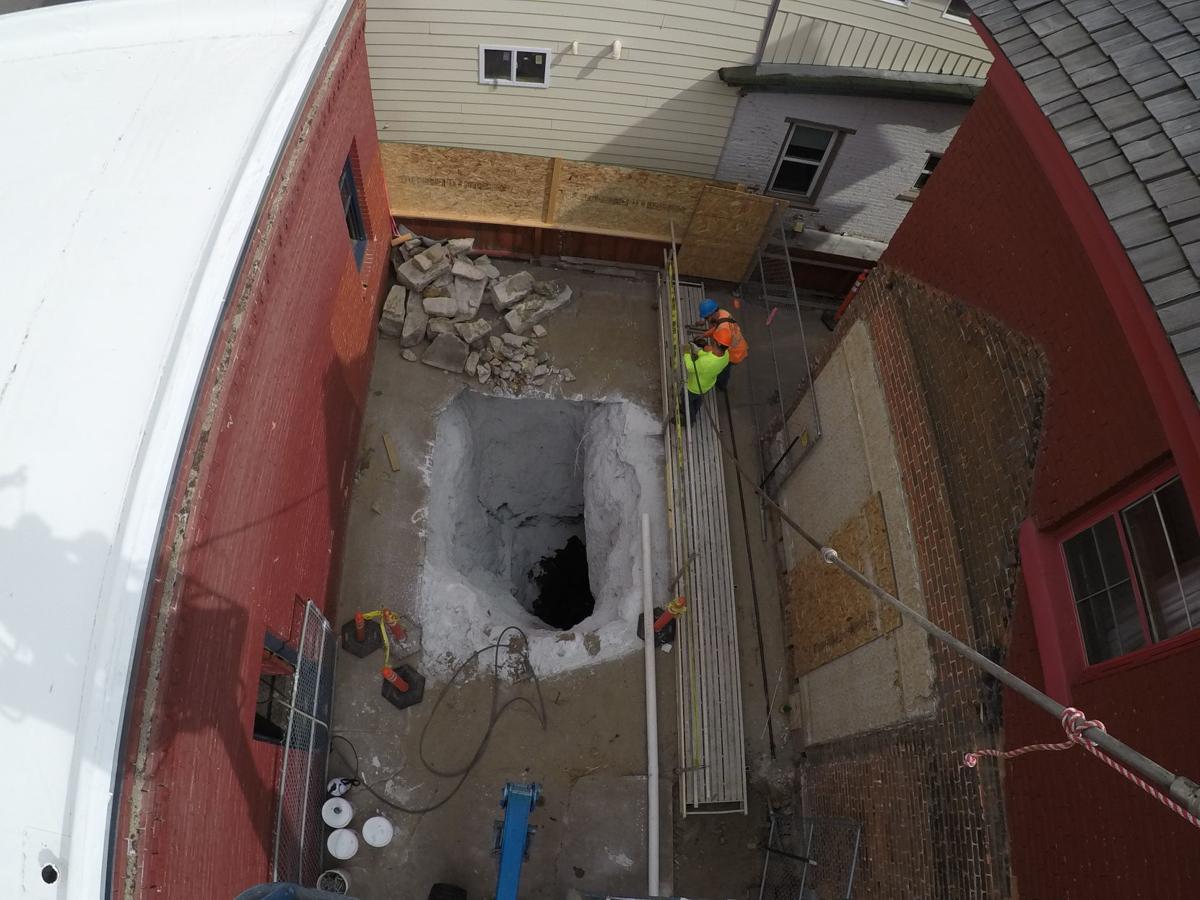 The 30-foot sinkhole that opened up in the 400 block of W. Broadway earlier this year. Workers have been repairing the hole for months. 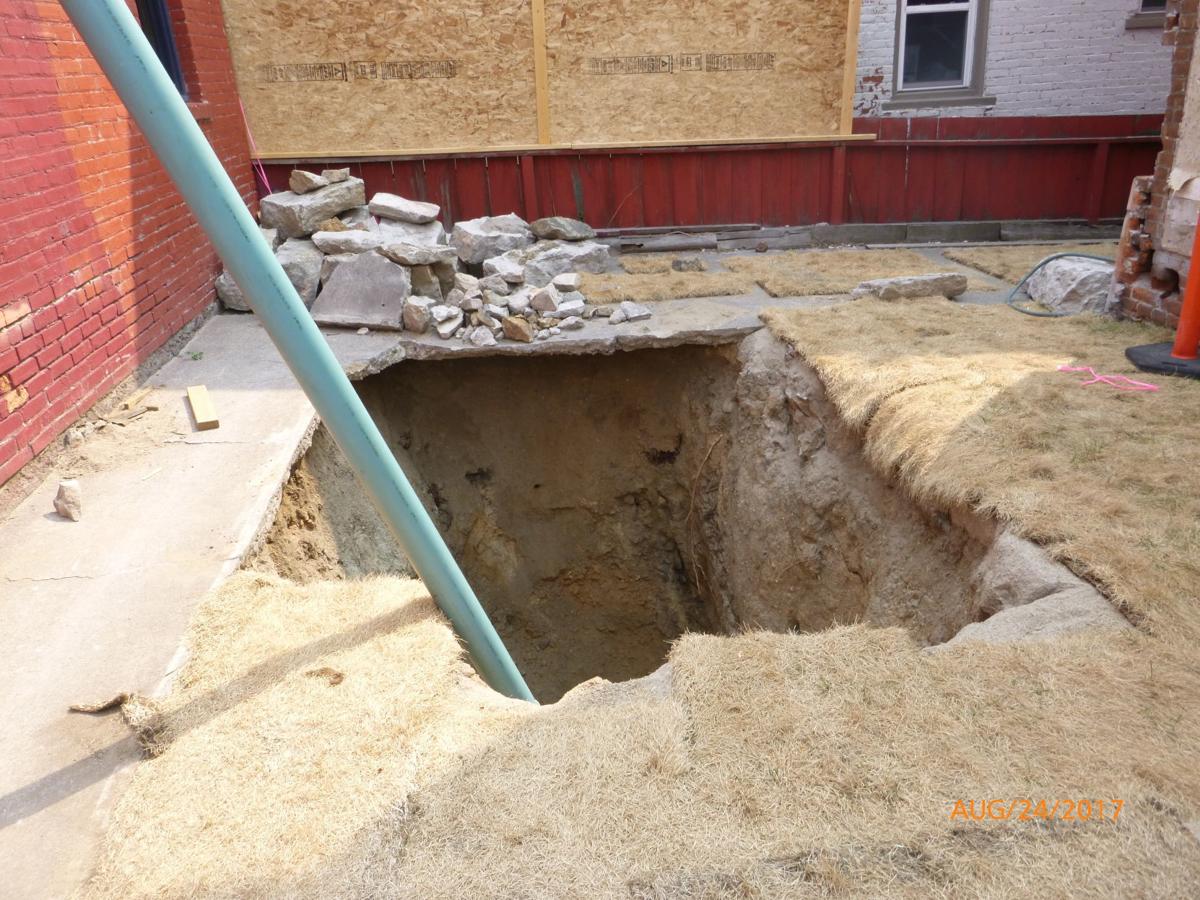 A bedroom was over this spot before the hole opened up on a June night. The homeowners had just had the bedroom torn down a couple of months before. 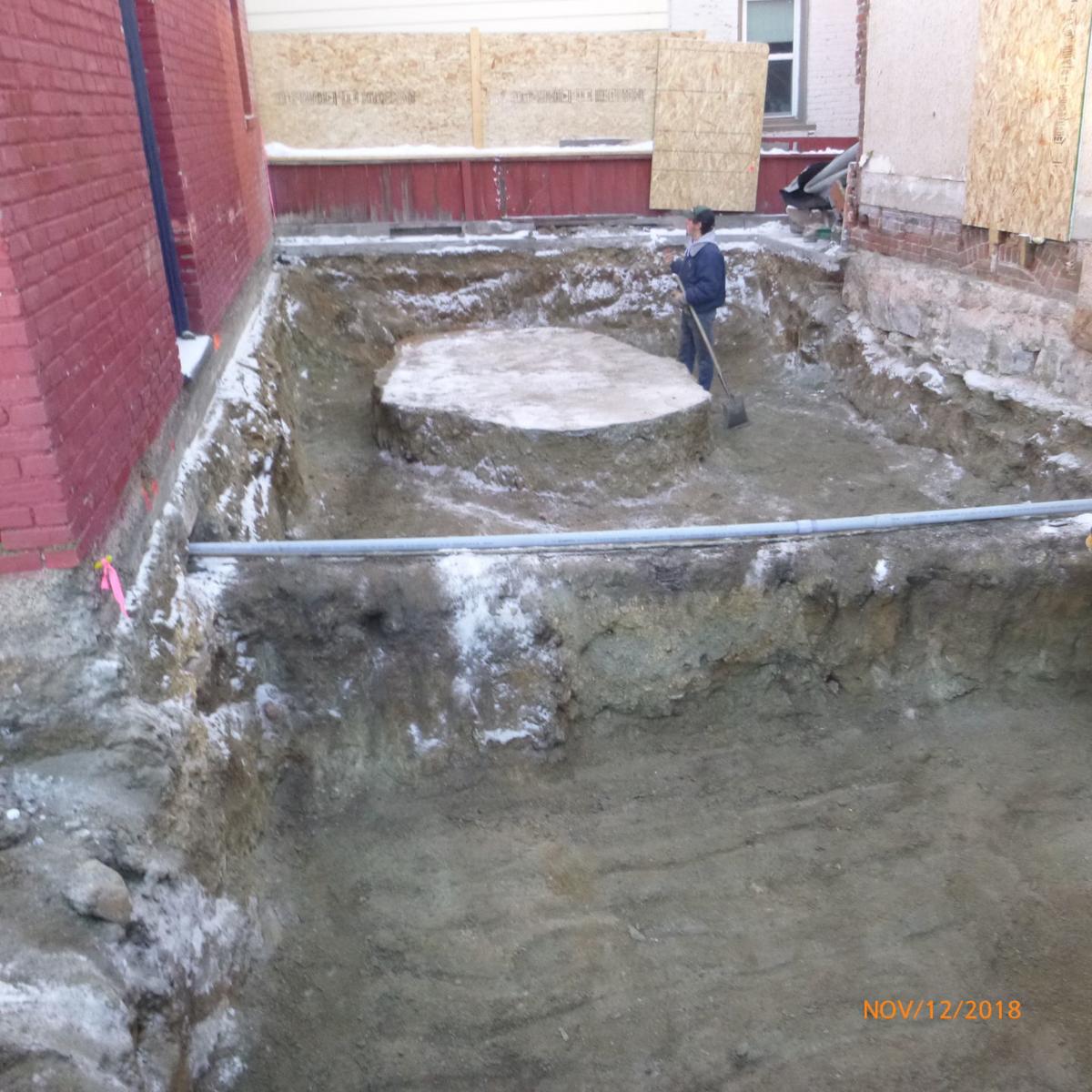 This site after workers plugged the hole with concrete.

While sitting by his kitchen window one evening this past June, Peter Lucon felt the earth move.

A mine shaft from the old Carrie Mine had opened up behind his house, causing a 30-foot sinkhole.

Lucon, a mechanical engineering professor at Montana Tech, has a 6-year-old, a 4-year-old and an 18-month old.

His kids were safely upstairs, but earlier this summer, Lucon had placed a wading pool for his three kids in the very spot where the mine shaft had opened up.

“We felt the ground shake, we heard it,” he said.

He and his family felt shaken themselves because of the close call. In March, they had torn down a bedroom that sat over that very spot because the room had started to pull away from the wall of the house. Not realizing the danger, Lucon used equipment to move dirt around and planted grass where the bedroom had been. Then he put the wading pool over the very spot.

Signs that something was wrong showed up just before the sinkhole opened. The ground slumped three feet deep, then dropped 12 feet deep earlier in June. The county came and put dirt in to plug that.

But after the sinkhole dropped 30 feet, the Lucons moved in with a relative for a couple of weeks.

The foundation of their home, in the 400 block of West Broadway, was not damaged. But had they not torn down the bedroom just a few months prior to the sink hole opening up, “it could’ve caused a lot more damage,” said Bill Snoddy, program manager of the state's Abandoned Mine program.

The state spent $100,000 to fix the sinkhole through the Abandoned Mine Lands program. The money for that program, a division of the Department of Environmental Quality, comes from a fee on local production of the state's coal mines.

Workers are finishing up the Lucons' sinkhole this month.

Sinkholes are not uncommon in Butte. Tom Malloy, Butte-Silver Bow reclamation specialist, said the county learned of a hole in the 120 block of West Pacific Street in Centerville on Monday that took 67 truckloads of dirt — some 670 cubic yards — to fill.

“It went down at least 100 feet,” Malloy said of the Centerville sinkhole. "We could not see bottom."

Malloy said a neighbor to that land, owned by the county, alerted Malloy to the Centerville sinkhole because children were throwing rocks down the hole.

“Then I went there and threw rocks down the hole. You could hear them tumble,” Malloy said.

The county was able to fill the Centerville hole within a day and a half but the sinkhole in Lucons' back yard “scared the hell out of me,” Malloy said.

It took months to fix, and the job is just now nearing completion.

Because the sinkhole was wedged between a historic brick house, a historic brick garage and a neighbor's house directly to the east, repairing that problem took a team of engineers, geologists and workers to figure out.

Workers washed it down, sending “thousands of gallons of water down the hole.” They wanted to make it fail further, to make sure it wouldn’t fail again. Based on maps, the county believes the mine shaft travels 150 feet below ground.

Then workers poured 48 cubic yards of concrete to fill the plug and put in a reinforced concrete cap. If the plug slips, the cap will remain stable, Snoddy said.

“It was a really dangerous site,” Snoddy said.

Snoddy said homeowners' insurance in Montana does not protect in the event of a mine shaft suddenly opening up in an owner's yard. Insurance in some other states does, he said.

That puts the burden on either the county or the state. But the county got a $300,000 grant from the state 14 years ago to deal with such issues.

That fund has never been replenished with additional money, Malloy said. Malloy said the county didn’t have enough money left to fix the sinkhole in Lucon’s backyard. That’s why the county turned to the state for help.

Snoddy said he believes the state can help the county get new funding through grants so the county’s sinkhole funds don’t disappear completely.

Malloy said he knew as soon as he saw the sinkhole in the Lucons' backyard that it was a former mine. He saw timbers in the hole.

The Carrie Mine was a silver mine dug around 1885. The Lucons' house was built about a decade later on top of it.

Victim in suspected Billings homicide was from Anaconda

An Anaconda man has been identified by Yellowstone County officials as the shooting victim in a suspected homicide in Billings last week.

A 14-year-old Ronan girl died early Sunday in a one-car rollover northeast of Ronan, a crash that hospitalized four other youths with non-life threatening injuries.

The last of four recent walkaways from the Butte Pre-Release Center was apprehended yesterday.

GREAT FALLS — A Montana man who rented a moving truck and tricked some friends into helping him steal nearly $40,000 in property from a Great Falls home has been sentenced to three years in prison.

A judge entered a not guilty plea Wednesday for a woman accused of setting a garage on fire in an alley on the Flat.

Laborers Frank Kerner, left, and Nathan Kent, with Hunter Brothers Construction haul in rebar as they finish capping the 30 -oot sinkhole from a mine shaft  that opened up earlier this year behind a home on Broadway Street in Butte.

The 30-foot sinkhole that opened up in the 400 block of W. Broadway earlier this year. Workers have been repairing the hole for months.

A bedroom was over this spot before the hole opened up on a June night. The homeowners had just had the bedroom torn down a couple of months before.

This site after workers plugged the hole with concrete.