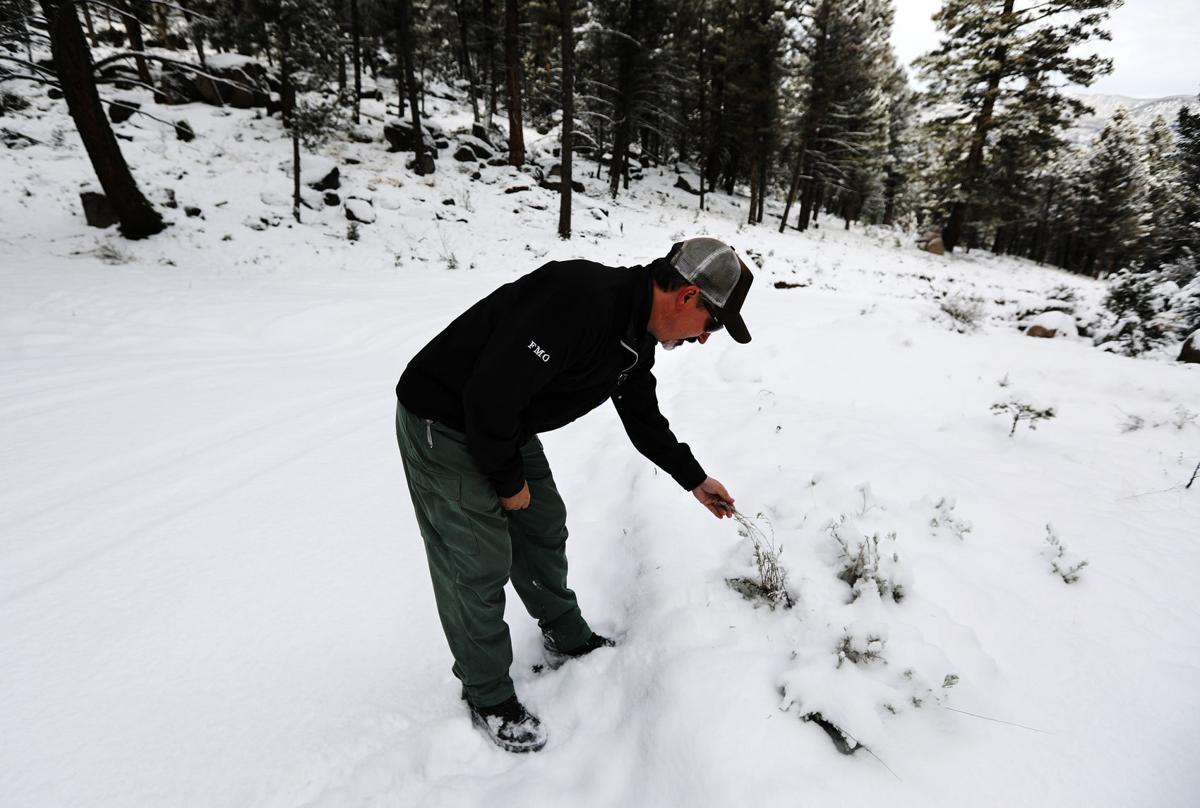 Kevin Smith, Jefferson Ranger District Fire Management officer, inspects a sage brush poking out of a fresh coat of snow on Thursday morning near the location of the McClusky Fire that burned 2,932 acres in late August. Smith said plants are already returning to the burned area that is not shown. 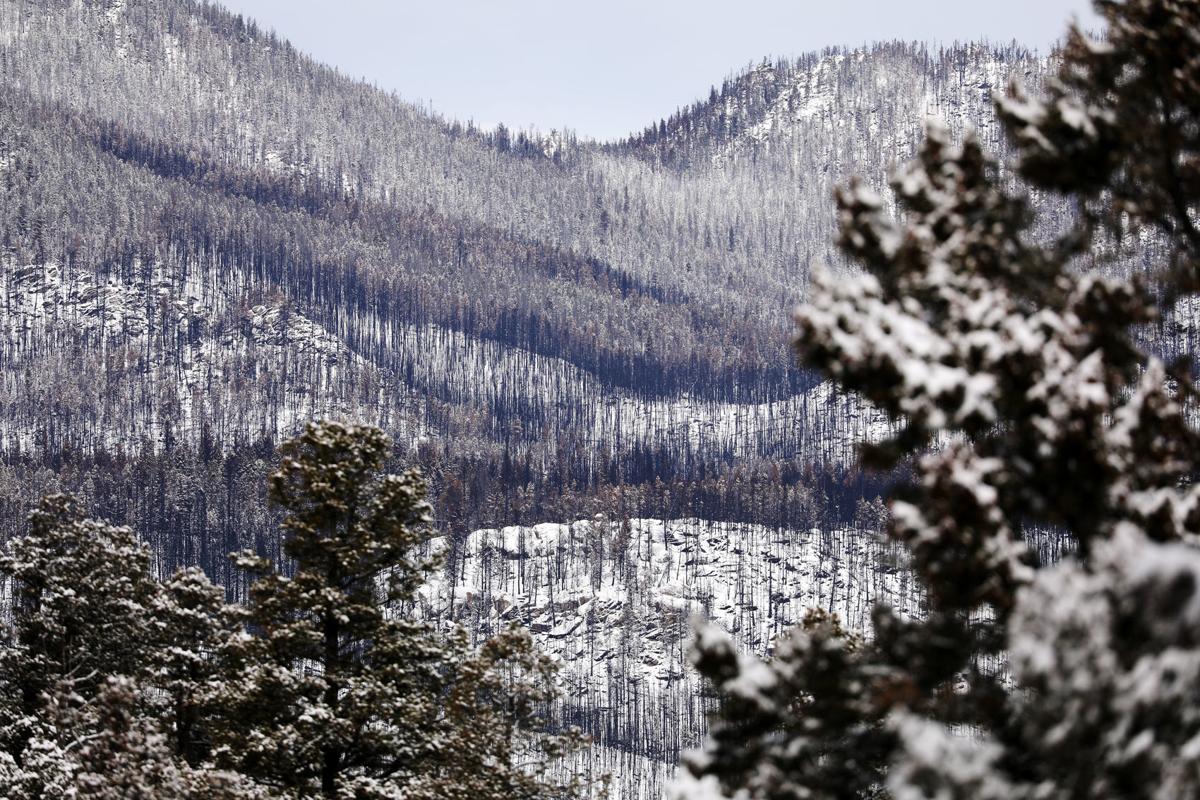 Burned trees line the ridge as a fresh coat of snow blankets the area where the 2,932 acre wildfire known as the McClusky fire burned near Butte in August.

Kevin Smith, Jefferson Ranger District Fire Management officer, said native grass is already showing, and only one percent of the 2,932 acres in the McClusky Fire burned to the point where land erosion would likely occur. The other 99 percent of the soil ranged from unburned to moderate severity, he said. Smith said that leaves behind a good mix of conditions and allows for new growth, which, in turn, will be good for wildlife. By default, that's good for hunters as well.

The lightning-caused blaze began north of McClusky Mountain on a ridge just at the eastern edge of Lost Park Research Natural Area, which is a research spot managed by the Forest Service. Despite its proximity to Butte as the crow flies, the fire was in a fairly remote spot. The Forest Service used Lower Whitetail Road to get back and forth and, in the process, improved it, Smith said.

Despite the name, the fire never actually made it to McClusky Mountain, which is visible from Interstate 90 just on the eastern side of Homestake Pass but west of the Pipestone exit. It stayed largely on the ridge behind McClusky Mountain until early September, Smith said. That’s when weather encouraged the fire to move into a draw and travel down into Gillespie Basin, getting close to a cabin on a landowner’s ranch. But, Smith said, firefighters had two to three weeks to prepare and were able to stop the fire from reaching the cabin.

Smith says locals can expect to see more of fires like McClusky— a fire that burns in the Beaverhead-Deerlodge National Forest to the east of Butte and is not put out, but managed.

“Over the next few years, people will have to get used to seeing smoke up here,” Smith said on a tour of the site.

That’s because with a forest full of dead lodgepole pine trees, the Forest Service can’t send firefighters out to defeat a blaze. Smith said firefighter safety has to come first. Burning, dead trees are too great a hazard, he said.

The lodgepole pine died around a decade ago due to a beetle kill.

So the priority is to protect streams and structures from the fire, but otherwise, watch it burn, Smith said.

Smith said there have been four to six fires in that area of the forest between Butte and Whitehall since 2011.

Firefighters cleared out the underbrush on the north side of Lower Whitehall Road to ensure if the fire traveled downhill, it wouldn't gain enough strength to jump the Forest Service road.

Weather put the McClusky Fire out. A snow storm at the end of September and some additional rain took care of the blaze. But Smith said during a visit to the site last week, he saw smoke still visible from the Forest Service Road.

He thinks a couple of logs, nearly rotten, and lodged down into some rocks, had managed to survive both the rain and snow and continued to burn.

“But, they haven’t expressed themselves since,” Smith said.

Kevin Smith, Jefferson Ranger District Fire Management officer, inspects a sage brush poking out of a fresh coat of snow on Thursday morning near the location of the McClusky Fire that burned 2,932 acres in late August. Smith said plants are already returning to the burned area that is not shown.

Burned trees line the ridge as a fresh coat of snow blankets the area where the 2,932 acre wildfire known as the McClusky fire burned near Butte in August.