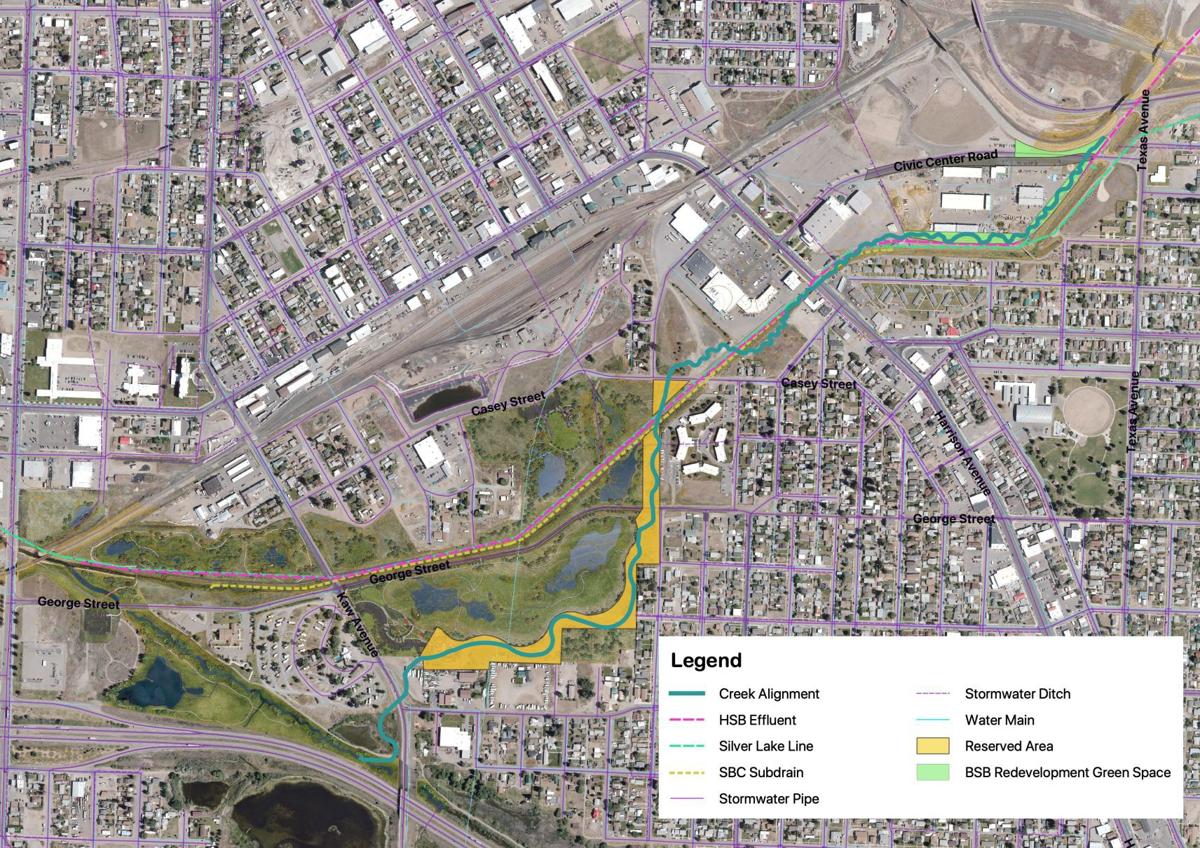 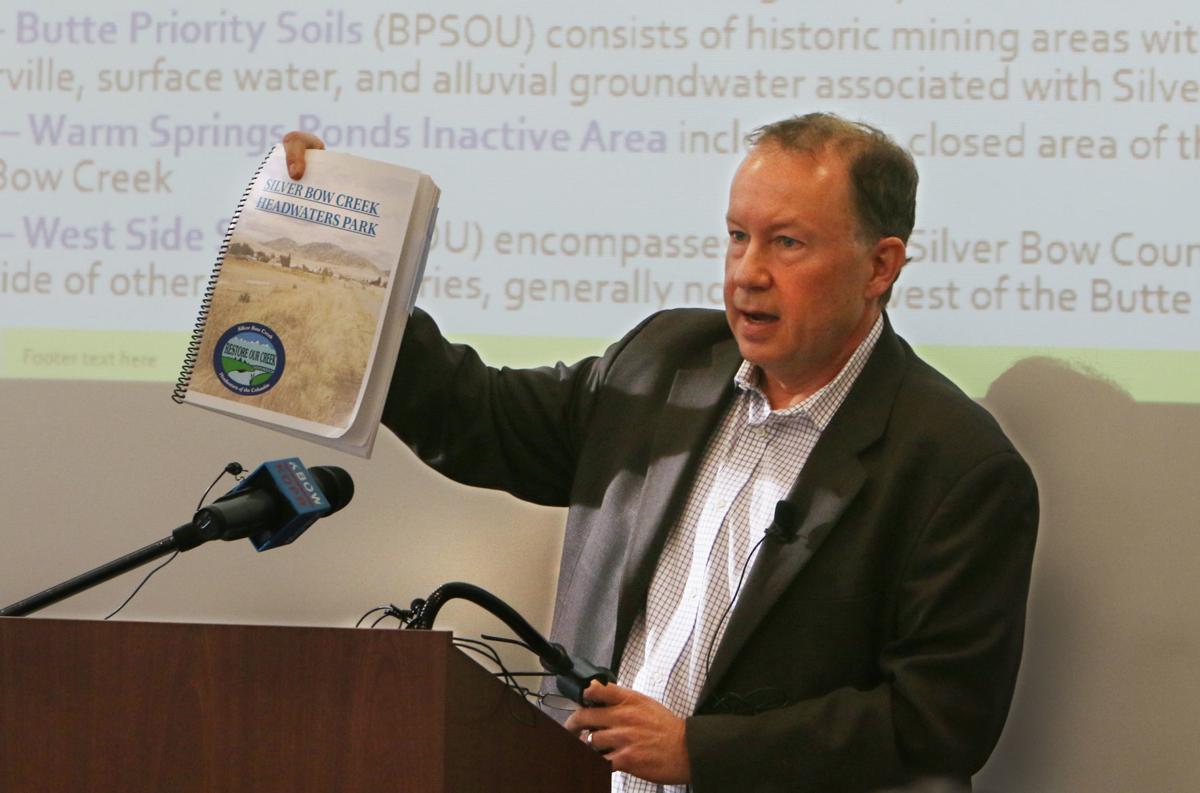 Former EPA Regional Administrator Doug Benevento exhibits a book about a proposed Silver Bow Creek Headwaters Park compiled by the Restore Our Creek Coalition during a presentation in Butte in January 2018 at which he announced the "agreement in principle" reached in secret negotiations on the Butte cleanup.

Former EPA Regional Administrator Doug Benevento exhibits a book about a proposed Silver Bow Creek Headwaters Park compiled by the Restore Our Creek Coalition during a presentation in Butte in January 2018 at which he announced the "agreement in principle" reached in secret negotiations on the Butte cleanup.

The moment is graven into the history of Butte’s cleanup by a photograph that has become shorthand for a long-held dream.

On Jan. 27, 2018, Doug Benevento, then EPA’s Region 8 administrator, triumphantly announced what had eluded negotiators for well over a decade — an agreement in principle on a consent decree for the Butte Hill cleanup.

Walt Hinick, photographer for The Montana Standard, did not miss the moment. His photo of Benevento with the creek plan has become emblematic of the community’s desire for a restored creek, and EPA’s recognition of that idea.

In the two years since Benevento’s assertion, Restore Our Creek and other community members have said, in effect, “prove it.”

In various conversations with stakeholders about the possibility of a creek in the corridor between Montana Resources and the confluence of Blacktail and Silver Bow creeks, caution often prevailed. Comments about cost, unfavorable topography and logistical obstructions — like, for instance, Harrison Avenue — were often used as expectation-tamping tools. And while some ideas were exchanged between the parties to those discussions, none of the Superfund negotiators — EPA, the state of Montana, Butte-Silver Bow or Atlantic Richfield — ever produced a map with a restored creek on it.

After considerable back-and-forth, EPA issued a $50,000 grant to the Citizens Technical Environmental Committee in Butte, to underwrite a feasibility study to see if a creek would be compatible with the remedial plans for the Butte Hill.

Now, that analysis has been completed by Water & Environmental Technologies. WET partner Elizabeth Erickson will discuss the study at a special CTEC presentation for the public Tuesday at Montana Tech (see information box). She previewed it for The Montana Standard.

Spoiler alert: The report makes clear that a creek is eminently feasible — and estimates the total cost, including design and construction, land acquisition, and road, pipe and utility crossings, at about $12.4 million — far less than it cost, for instance, to remove the Parrot tailings. Further, the analysis specifies that amount could be considerably less if construction of the lined creek were done in full coordination with the remedial work to be done in the corridor — basically, at the same time.

“With the existing available information, the feasibility review concluded that no design/construction considerations preclude the future restoration of a lined, meandering Silver Bow Creek corridor in its historic upper reaches from Continental/Shields Avenue to Blacktail Creek near the KOA Campground.”

Erickson said, “I think it’s not only doable, but it’s a great recreational opportunity in the middle of our town.”

The study originally considered three potential stream alignments. The one recommended by the analysis, Alternative 1A, “provides a stream corridor beginning near Continential Drive/Shields Avenue and ending at Blacktail Creek south of the KOA campground.”

Alternative 1B would have been the same until it reached Kaw Avenue. At that point, it turned north, crossing George Street and connecting to Silver Bow Creek.

But the study found that alignment would potentially conflict with remedy features planned for Diggings East, the existing storm water channel and the Subdrain, also part of the remedy. “Additionally, as this alignment flows to the north, the ground surface elevation increases, thus precluding gravity flow of water in this section of the corridor. Based on the possible impacts to remedy and major design considerations … it is deemed less feasible than Alternative 1A and will not be further considered,” the study says.

“The remedial Silver Bow Creek Subdrain, a sanitary sewer main, storm sewer components, and many other utilities are located near this channel,” the study says. “This alternative would involve providing an alternate route for storm water, such as putting it in a pipe, and building the stream channel on top of the storm water piping. It is unknown at this time whether adequate space is available in the channel for both storm water and the creek channel.

“This option does not provide the meandering aesthetics and natural stream banks as envisioned in the Silver Bow Creek Headwaters Park plan, and thus does not achieve the community goals outlined therein,” the study said.

“In addition, much existing remedial and municipal infrastructure is located along this channel and there is and will continue to be a need for access to this infrastructure for operation and maintenance purposes,” the study said. “Thus this alternative does not meet community goals or the project requirement not to impact remedial features, and has been deemed less than feasible.”

The following specific parameters were used to define the study:

Certainly, engineering challenges abound along the 7,200-foot length of the lined creek option that the study favors. The chosen alignment allows for "a lined corridor width of 50 feet and an average excavation depth of 10 feet," the study says.

Perhaps the biggest issue to be managed overall is the very slight elevation change — the topography of the corridor is very nearly flat. Particularly from George Street to Kaw Avenue, there is “currently very little surface slope,” the analysis says.

Here’s one area where it would make sense to coordinate the creek work with the planned work on the remedy, Erickson said. In remedy, waste must be removed from the Diggings East and Northside Tailings locations, and a system of storm water retention ponds are planned there. With all that earth-moving, it’s impossible to know now what final surface elevations will be. But if that work were done with an eye to elevation requirements for the nearby creek channel, it would prevent earth having to be moved yet again to modify the topography for the creek’s elevation requirements.

Also, there are places in the proposed alignment where the groundwater is close to the surface, raising the issue of potentially floating the liner. But that problem, too, is not insurmountable, Erickson said.

An encouraging sign: In arriving at the proposed alignment and doing the analysis, WET met with all the stakeholders — Atlantic Richfield, EPA, Butte-Silver Bow, and the state Natural Resource Damage Program and the Department of Environmental Quality.

“It was a fun project. Talking to all the stakeholders made me feel like the project is possible,” Erickson said.

She said she was also surprised and pleased that the creek's costs seem reasonable — much less than some numbers that had been thrown around earlier in discussions about the potential project.

“We are pleased that the WET analysis finds the proposed restoration of the first mile of Silver Bow Creek compatible with the remedy in the upcoming consent decree,” said Northey Tretheway, spokesperson for Restore Our Creek. “WET’s analysis brings some comfort to the people of Butte who are committed to the creek’s restoration.”

Erickson said one thing that encouraged her was a key interaction with Butte-Silver Bow.

“Near where the creek would begin, we originally had it winding through the shops area, where Phase 2 of the Parrot removal will be,” she said. “The county took exception to that, saying that it hoped to reserve much of that property for development. But then they told us something we didn’t know: They had earmarked a strip at the edge of that property for a potential waterway.

“So we put it there. And just as it would be elsewhere, the creek could be an amenity that makes the rest of the property more valuable,” Erickson said.

When asked about it, Butte-Silver Bow Superfund Coordinator Jon Sesso said much the same. “Whether that property gets developed as a hotel, or as a residential area, it could be a plus to have a water feature right there.”

Sesso said he has not seen the feasibility analysis yet, but reminded, “Hey, we’re pretty bullish about the plan we have.” He said the planned storm water retention ponds and the connections between them would themselves provide the public with a water feature.

Tretheway, however, said the group remains determined to see a restored creek.

“The WET report is a step in the right direction, but all in Butte must remain alert and active as the consent decree review process proceeds to make sure their process does not exclude Butte’s first mile. We have come a long way and we do not want to falter or lose something in the closing minutes of this very long game.”

At a special meeting Tuesday, Jan. 14 at 6:30 p.m. at the Copper Lounge at Montana Tech, jointly hosted by the Citizens Technical Environmental Committee and the Restore Our Creek coalition, Elizabeth Erickson of Water and Environmental Technologies will explain the results of the analysis WET did to determine feasibility of a restored creek along with the remedial features planned by Superfund negotiators. The meeting is open to the public.