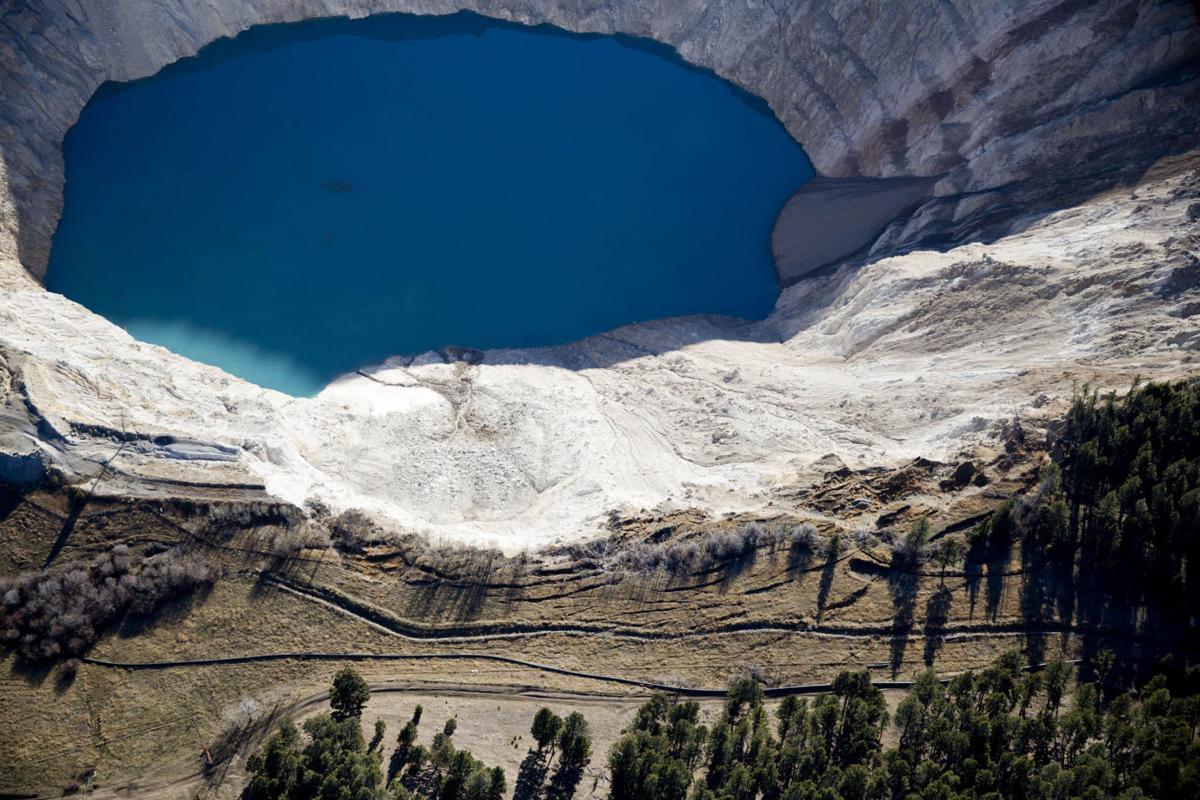 In this photo taken from an airplane flying over the Montana Tunnels' pit in 2018, the fractures outside of the pit are visible in the lower part of the photo. 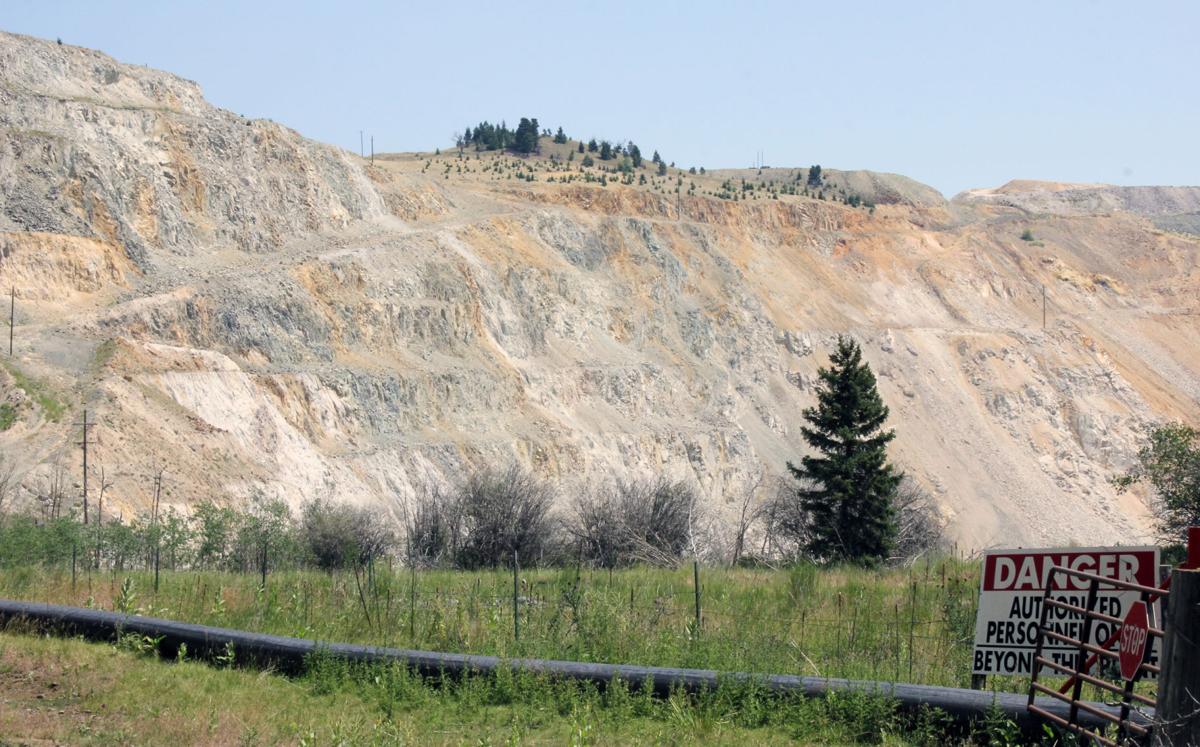 The 16-inch pipe that contains Clancy Creek along the edge of the north wall of the Montana Tunnels pit is pictured here in a photo taken in 2017. Experts say it's not a question of "if" but "when" that land will collapse into the pit, taking the pipe containing Clancy Creek with it.

The Montana Department of Environmental Quality laid down the law last week, issuing a violation letter to the Montana Tunnels mine in Jefferson City.

The mine is considered officially abandoned or complete, the company owes a $16.8 million reclamation bond, and reclamation is overdue, said the DEQ.

Montana Tunnels Mining Inc. owns the once active gold, silver, zinc and lead mine in Jefferson County. If the company doesn’t respond and resolve the issues within 15 days of official receipt of the letter, the mine will forfeit ownership and the $19.7 million bond the state is currently holding.

Should forfeiture occur, DEQ Mining Bureau Chief Dan Walsh said Montana House Bill 722, passed in 2019, would open the door for another mining company posting the full bond to come in and take over the operation, which would include a major expansion. The DEQ could allow up to five years for a company to establish itself.

If there are no takers, the DEQ would assume responsibility for reclamation, $16.8 million shy of the planned cost.

The mine hasn’t produced ore since 2008. Since then, the state has pushed for reclamation, as the mine’s potentially unstable pit wall necessitates re-routing  Clancy Creek. Waste rock must be contoured, buildings demolished and the tailings impoundment dewatered as well.

Instead of proceeding with remediation, Montana Tunnels has long promised a major expansion costing an estimated $145 million it claims would generate 270 jobs. The company has yet to show up with the funds to do so, let alone put up the full bond it owes.

The mine’s permit was suspended in 2018 for failure to post adequate bond, estimated at $36.5 million as of September 2020. In addition to the $16.8 million bond still owed to the state, the company owes $7.7 million to Jefferson County in back taxes.

Abandoned mines are an old story in Montana, but the story isn’t over. Pegasus Gold Corp’s notorious 1998 bankruptcy left behind endless environmental cleanups across the state, and left taxpayers in the state to foot an over $100 million bill at the Pegasus mine near Zortman alone.

Pegasus once ran the Montana Tunnels mine. Apollo Gold, an entity that emerged from the bankruptcy, took ownership in 2002, and Denver-based Montana Tunnels fully acquired the mine in 2009.

Since then, all that Montana Tunnels has mined at the site is debt.

Reclamation of the site is at the forefront of concern for the DEQ.

Conservation groups Montana Trout Unlimited and Earthworks have for years pushed the DEQ to take the bond money paid so far and reclaim the site. The organizations have even gone to the length of privately investigating the structural integrity of the mine’s pit.

The DEQ initiated and approved a new addition to the site-wide reclamation plan last year, which would permanently divert Clancy Creek away from the eroding edges of the mine’s defunct pit.

The mine installed a pipe to temporarily divert the creek several years ago when part of the pit wall collapsed.

But despite last year’s new plan to get the show on the road, Montana Tunnels still hasn’t moved forward with reclamation at the site, the DEQ said in the violation letter.

Fortunately, the mine doesn’t show acid mine drainage, common in abandoned mines in Montana. The mine doesn’t currently pose a significant threat to environmental health, the DEQ said in its letter, adding that the pit is filling with water, but the water has been tested and meets water quality standards.

Kuipers said it’s not a question “if” the north side of the pit is going to cave in, but “when.”

Dave Williams, a Bureau of Land Management geologist at the time, concurred with that assessment.

When reclamation will start still depends on Montana Tunnels’ response to the violation letter and the DEQ’s course of action afterward. In the event expansion does go forward — either by Montana Tunnels or another company — Clancy Creek would be reclaimed in a different manner, but would still be a top priority going forward, Walsh said.

On Tuesday, Montana Tunnels owner Patrick Imeson told The Montana Standard something he has said in the past — the mine will get the money and expand.

“You know, we're working on an overall financing plan. And so we're kind of a little bit at the vagaries of the financial markets, but we are active in the market on the capital raising side now,” he said.

He said the company has been actively fundraising with the bank for two or three weeks.

“It's an ongoing process. They're giving us indications that they believe that they can complete this transaction in 60 to 90 days,” he said. “So if that's reality, that would be the kind of time frame that we'd be posting both the bonds and continue with the expansion plan.”

In August 2017, Imeson told The Montana Standard financing would be secured in fall of that year.

The county has worked diligently to get what’s owed since 2009, Kunz said, and is now in the process of trying to take control of the tax deed for the mine property. The county is working with the DEQ to see if it can be done without taking on responsibility for the cleanup, Kunz said.

In the meantime, the county’s been without a mine that some, including Mark Thompson, vice president of Montana Resources in Butte, have said has real potential, and been left with a massive shortage in funding for community essentials.

“Those taxes would be a windfall for the schools and the fire department. It would make a huge difference to them. Their budgets have been short every year since 2009, because those taxes aren't paid,” Kunz said.

Jefferson County Commissioner Leonard Wortman said Montana Tunnels would be among the top taxpayers in the county — if the company paid its taxes.

“The schools are the biggest losers in the deal,” he said.

Imeson said the company will pay those taxes. However, he said they’re tied in with the same long-running funding promise. Securing the owed bond for reclamation and the $7.7 million in owed taxes will likely depend on securing the $145 million his company hopes to acquire from an investment bank for the expansion, he said.

Imeson also said the company intends to respond to the DEQ’s request, do the reclamation, pay the remaining bond owed and expand the mine.

“We’re in discussion with our lawyers at this point regarding the response,” Imeson said.

As The Montana Standard reported in 2017, Imeson has had serious troubles with the Securities Exchange Commission in the past, and has been sued by his lawyer for disputed legal claims.

Wortman remains hopeful the county will someday see the tax money, but doesn’t expect it. He said he is generally pro-mining and cited Golden Sunlight as a mine that’s been good to the county.

He said he’s concerned for the remediation of the site — for Clancy Creek, the stability of the pit wall, and for the state taxpayers who may get stuck paying for part of the cleanup.

Imeson has let the county down, Wortman said.

“He’s made promises to us that he hasn’t been able to fulfill.”

If the bond is forfeited, and no company takes on the bond and expansion of the mine, the DEQ will have $19.7 million to perform a cleanup the agency estimates will cost $36.5 million.

Walsh said the DEQ would then hire a private engineering firm to produce a new assessment of the remedy cost, and seek funding for the difference.

One possible avenue would be a grant from the Montana Department of Natural Resources and Conservation — state money.

“That's taxes paid by operating mines. They're self-taxing in that regard. And that's money that's available for reclamation. So in the traditional look at taxes of citizens I don't feel like it fits that category. But others might interpret that differently,” Walsh said.

Whether any funding could be obtained from those sources is yet undetermined, and would likely fall short of what the current plan for reclamation requires, Walsh said.

In other words, the public may not pay as much, but would instead have to settle for a lesser cleanup.

“So at this point, it's really hard to predict how much, or if there would be a public funded source that could be used for the reclamation activities there. And as a result, the fallback is that we look at the reclamation plan, we potentially look at changes to that reclamation plan to get the best reclamation outcome that we can for the bond dollars that we do hold," he said.

Kunz and Wortman said they would love to see a responsible mining company come in and continue production at the mine in their county.

Brooks said he isn’t convinced more mining is the answer in the event of forfeiture, which would mean another company will have walked away without paying its dues, leaving another expensive mess in its wake.

“I think there is some urgency to start reclamation now,” Brooks said.

Doug Butori irrigates his ranch from German Gulch Creek, which has its headwaters at the base of the defunct Beal Mountain Mine near Anaconda.

In this photo taken from an airplane flying over the Montana Tunnels' pit in 2018, the fractures outside of the pit are visible in the lower part of the photo.

The 16-inch pipe that contains Clancy Creek along the edge of the north wall of the Montana Tunnels pit is pictured here in a photo taken in 2017. Experts say it's not a question of "if" but "when" that land will collapse into the pit, taking the pipe containing Clancy Creek with it.