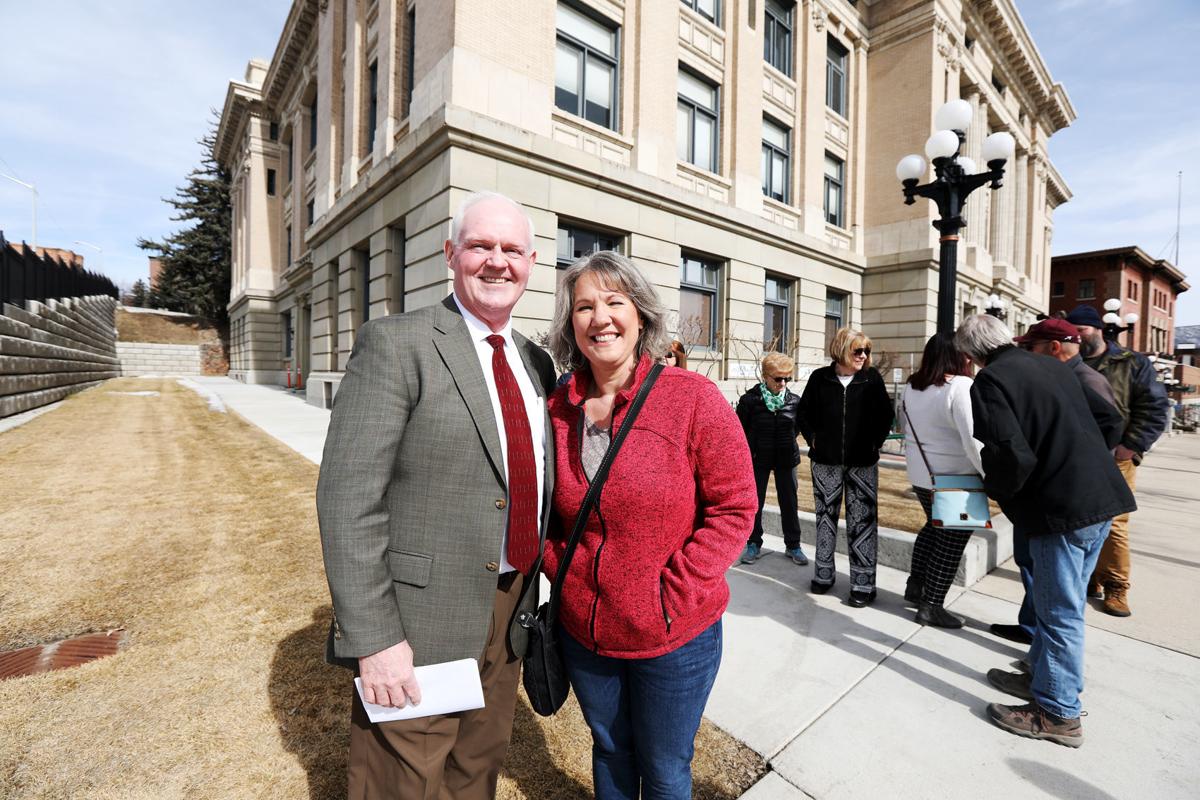 Tom Cronnelly and his wife Kristi embrace in front of friends and family on Thursday afternoon after Tom announced his candidacy for chief executive of Butte-Silver Bow County. 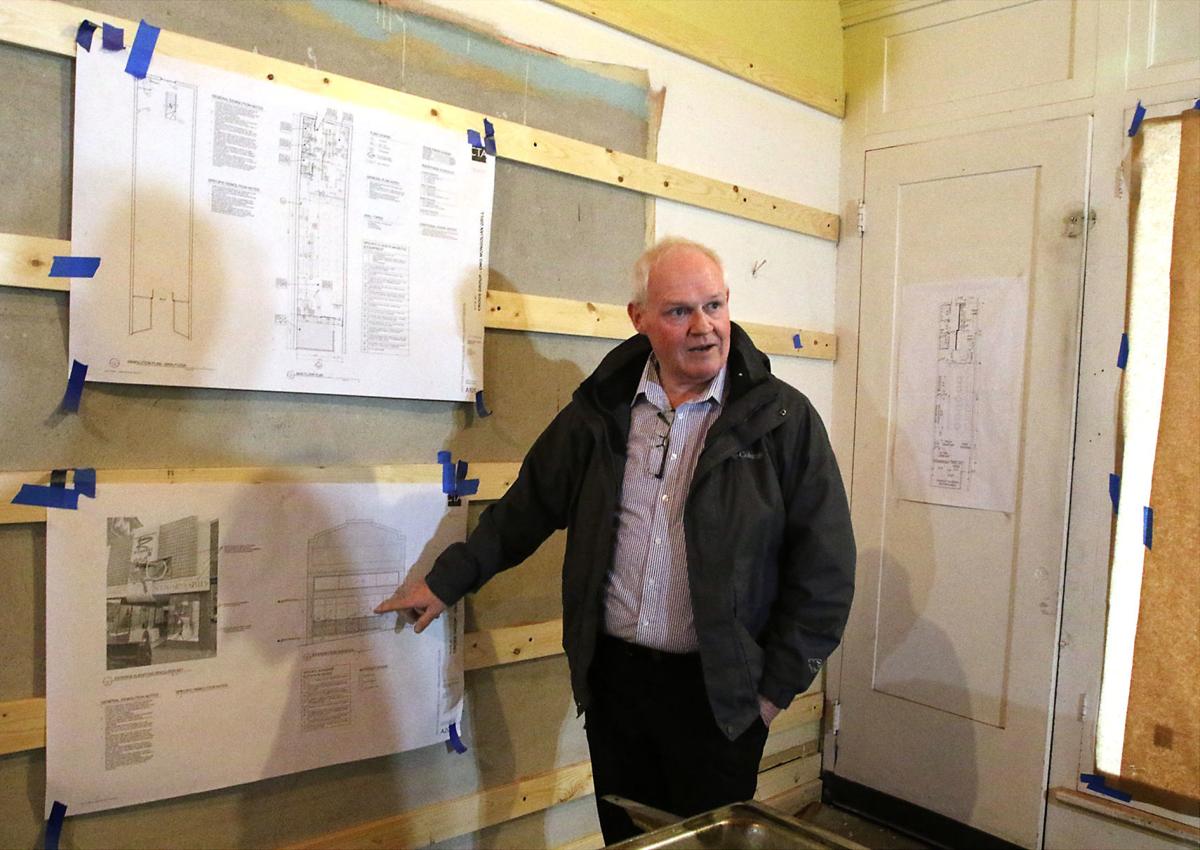 Tom Cronnelly of Butte, seen here in 2018 discussing plans for the OMG! Mongolian Grill restaurant he opened that year on Main Street, is now running for chief executive of Butte-Silver Bow.

Tom Cronnelly, a Butte native who held management positions with several national retailers before opening the OMG! Mongolian Grill on Main Street in 2018, is running for chief executive of Butte-Silver Bow County.

Cronnelly, 55, said his business retail career has given him a lot of experiences and perspectives that would serve him well in the chief executive post.

“As a consumer, I always look at the world of customer service and as a taxpayer, we are all customers of the county,” Cronnelly said to a dozen relatives and other supporters outside the courthouse early Thursday afternoon. “I think my business background will really help improve that experience.”

Cronnelly becomes the fourth person seeking the county’s top political post, which includes management of city-county and operations and oversight of more than 450 county employees.

The others are Commissioner Brendan McDonough, county Parks Director J.P. Gallagher and current Chief Executive Dave Palmer, who is seeking a second, four-year term. There could be others, but the filing period closes at 5 p.m. Monday.

Cronnelly was born in Butte, lived his early years in Centerville, graduated from Butte Central High School and earned a bachelor’s degree in business administration from Montana Tech. His parents are the late Mary Clare and Jug Cronnelly, and he has siblings and extended family in Butte.

He said he worked at a Sears store on Dewey Boulevard while attending college and after graduating, entered Sears’ leadership development program and worked for the retailer for 10 years.

“I had to leave town to follow my career,” Cronnelly said, one that has also included senior positions at retailers including Target, CompUSA and Comcast Cable.

“As they say, you can take the boy out of Butte but you can’t take the Butte out of the boy,” he said. “I spent a lot of time trying to figure out how to get back to Montana.”

He returned to the state in 2012 as district manager in Bigfork for Sears Hometown Stores, overseeing 16 stores in Montana, Wyoming, Washington state and Idaho, before moving back to Butte in 2016. This is his first time seeking public office.

In his career travels, he said, he noticed that many smaller communities were doing pretty well and had strong economies.

“I think with my business background, I can improve things in many ways,” he said. “For example, we opened our restaurant in Uptown Butte with the goal to make a positive impact on the community. I think we’ve done that. I care deeply about my hometown and want to make things better.”

He said county officials and groups such as the Butte-Silver Bow Chamber of Commerce do a good job of “setting the hook” when businesses express interest in the city, but he hopes to cast a longer line. He serves on the Chamber’s board.

“One thing I would like to focus on is recruiting businesses, specifically in the manufacturing world, that won’t compete with our current services,” he said. “I think the pie needs to get bigger.”

He said he knows senior executives at many national retailers and understands how they look at new markets.

“I have some specific ideas and tactics in mind to help improve our local situation without hurting existing businesses,” he said.

Cronnelly and his wife, Kristi, are founders of the annual Disability Employment Awareness Month campaign, “OMG! I Have a Job,” which helps people with developmental disabilities get jobs in the community. Their son, Joey, is a recent graduate of Butte High School.

Cronnelly also serves on the board of directors for the Montana Special Olympics Games Management Team and the Butte-Silver Bow/Montana Tech Steering Committee. He also recently volunteered to lecture at the Highlands College about employment of disabled workers.

He said he was friends with the other candidates in the race — McDonough, Gallagher and Palmer — and wished them the best of luck.

The primary election is June 2 and only the two vote-getters will advance to the Nov. 3 general election.

Ted Deshner, who owns the Party Palace bar and three other establishments in Butte, joined four others in the race for chief executive of Butt…

Tom Cronnelly and his wife Kristi embrace in front of friends and family on Thursday afternoon after Tom announced his candidacy for chief executive of Butte-Silver Bow County.

Tom Cronnelly of Butte, seen here in 2018 discussing plans for the OMG! Mongolian Grill restaurant he opened that year on Main Street, is now running for chief executive of Butte-Silver Bow.