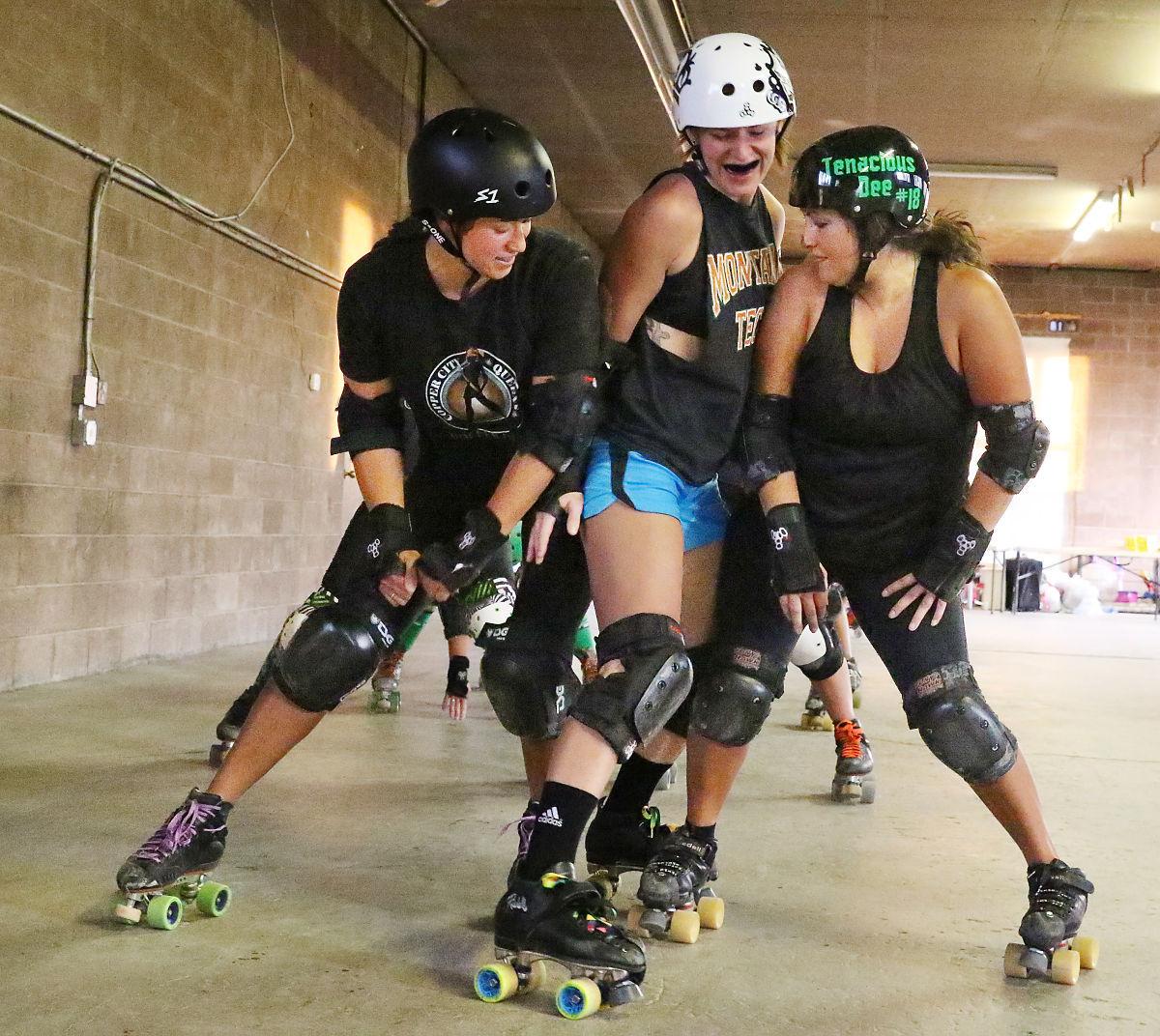 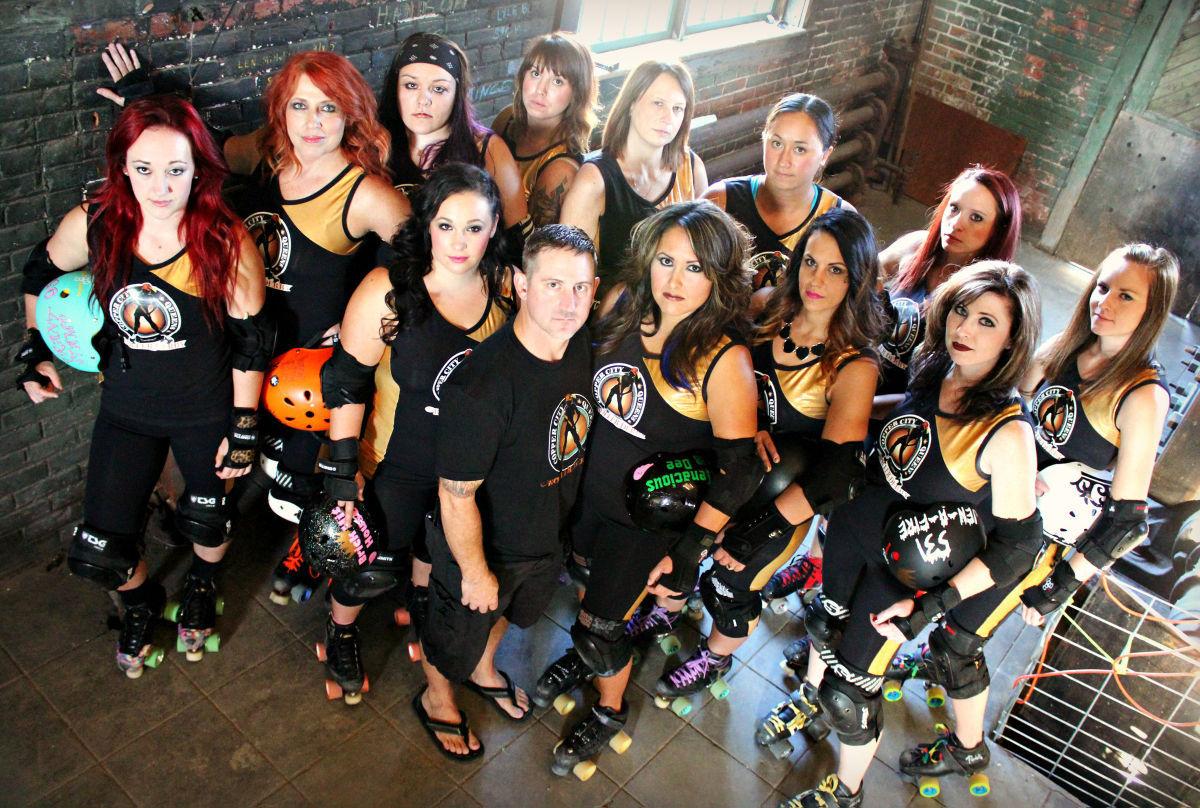 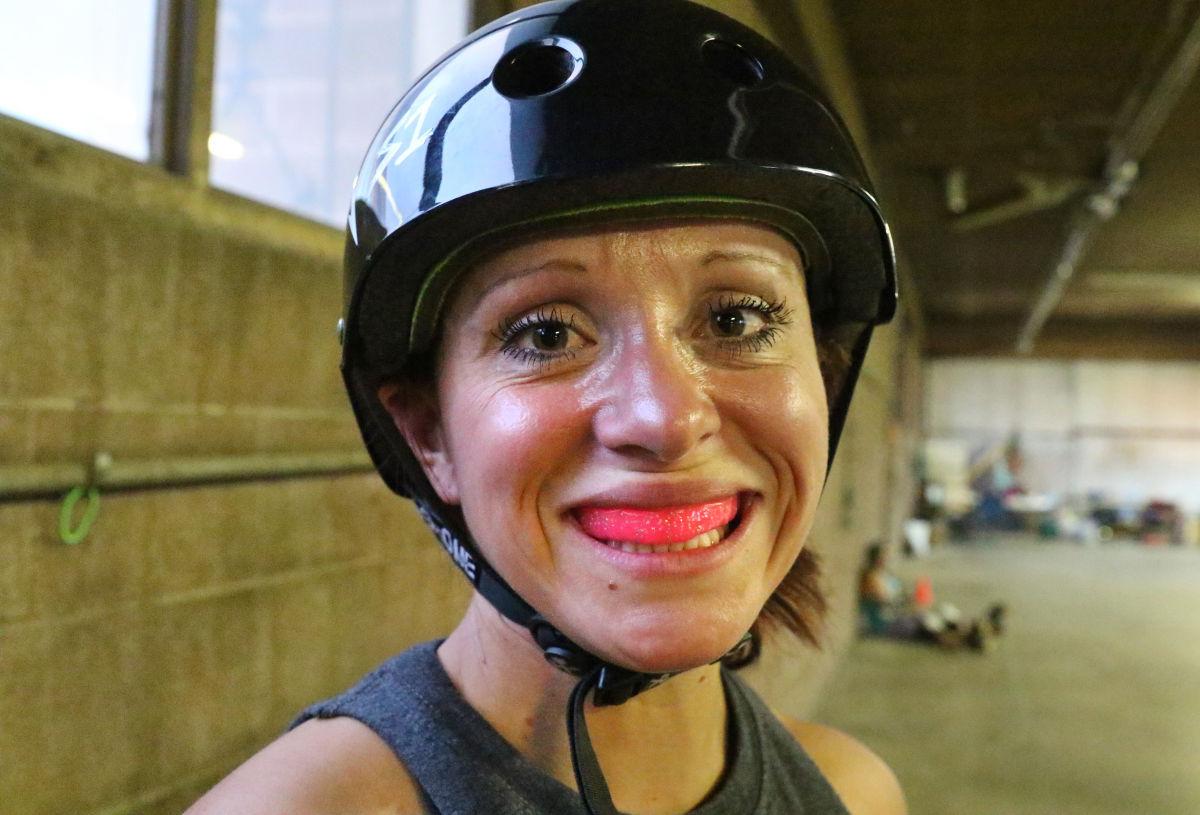 Kaleena Miller tightens the laces on her skates during a break at roller derby practice. 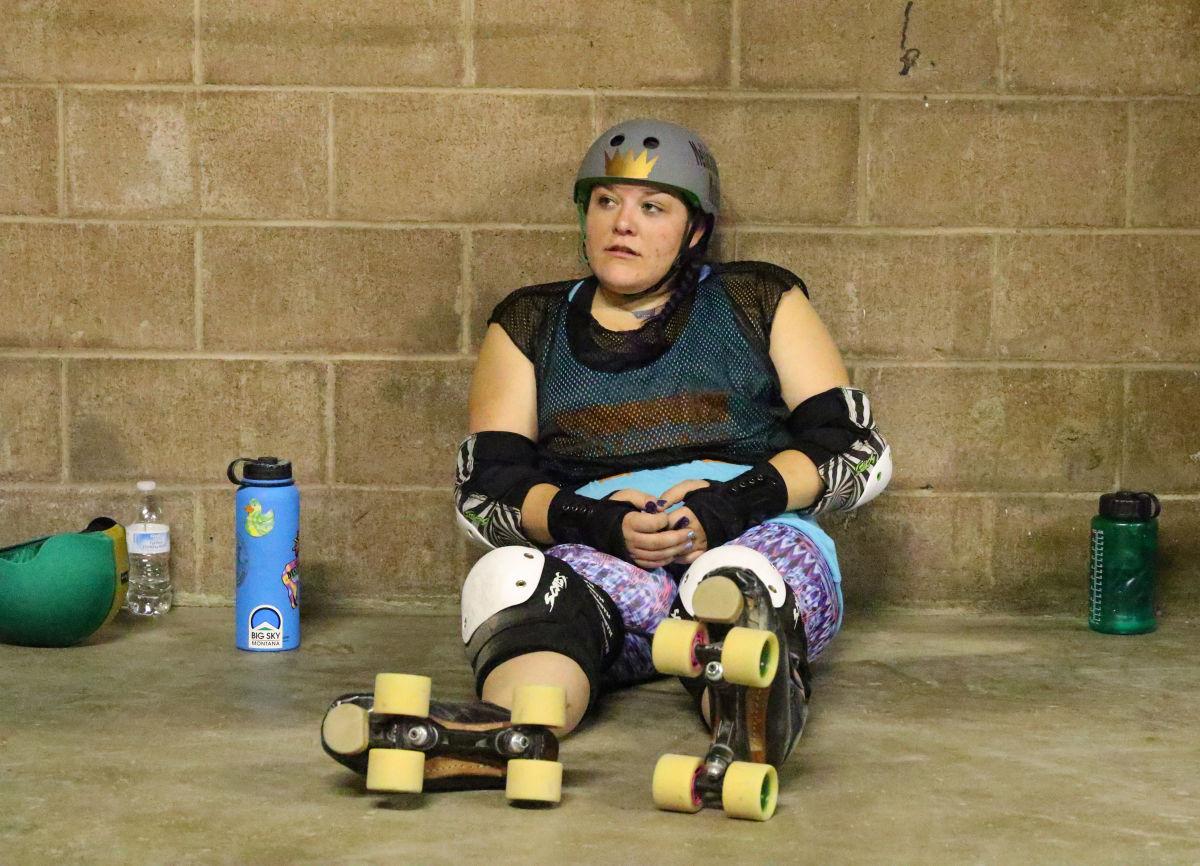 Melanie Maki, also known as "Melicious Motherlode," takes a break after an hour of skating practice. 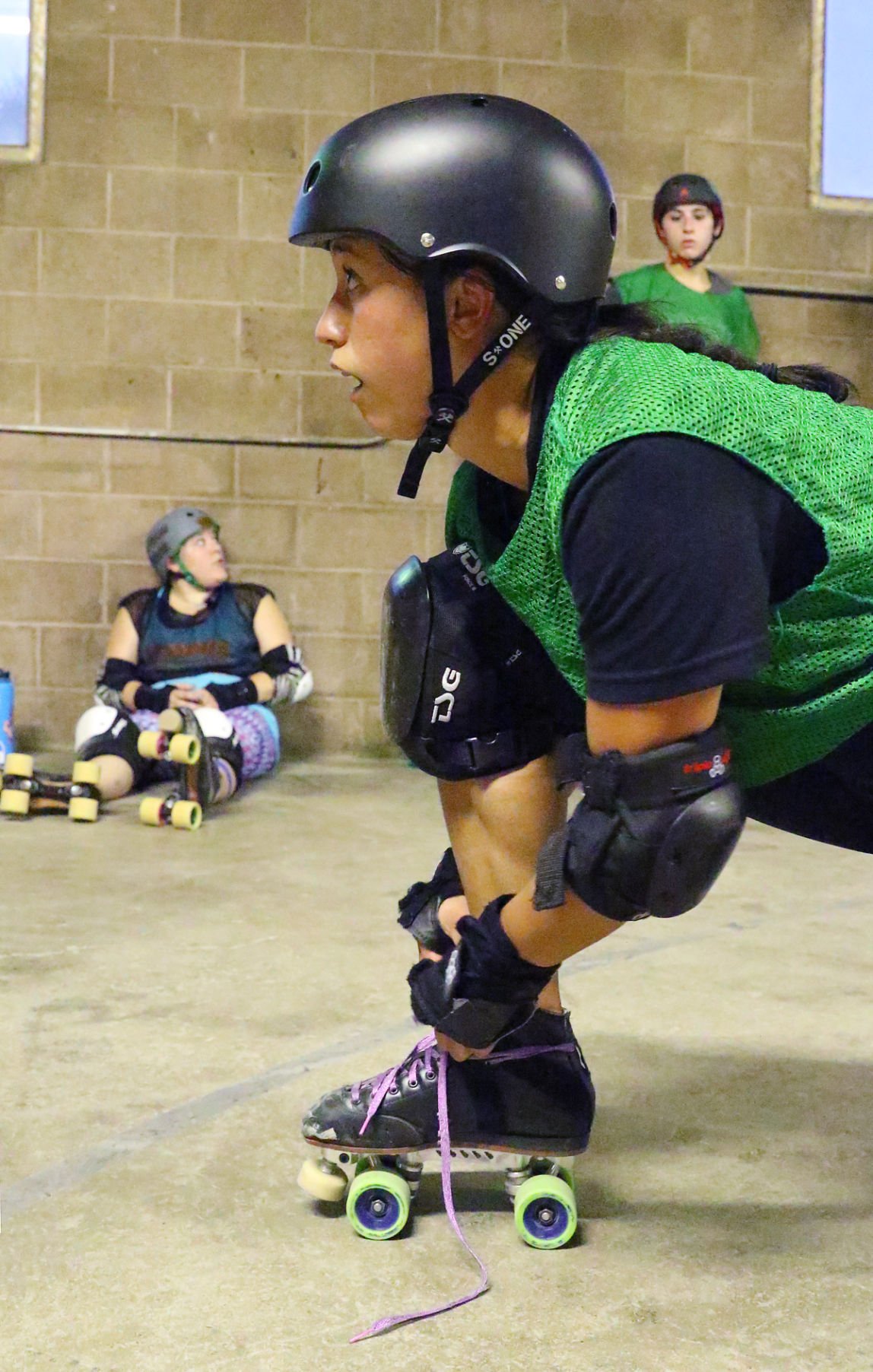 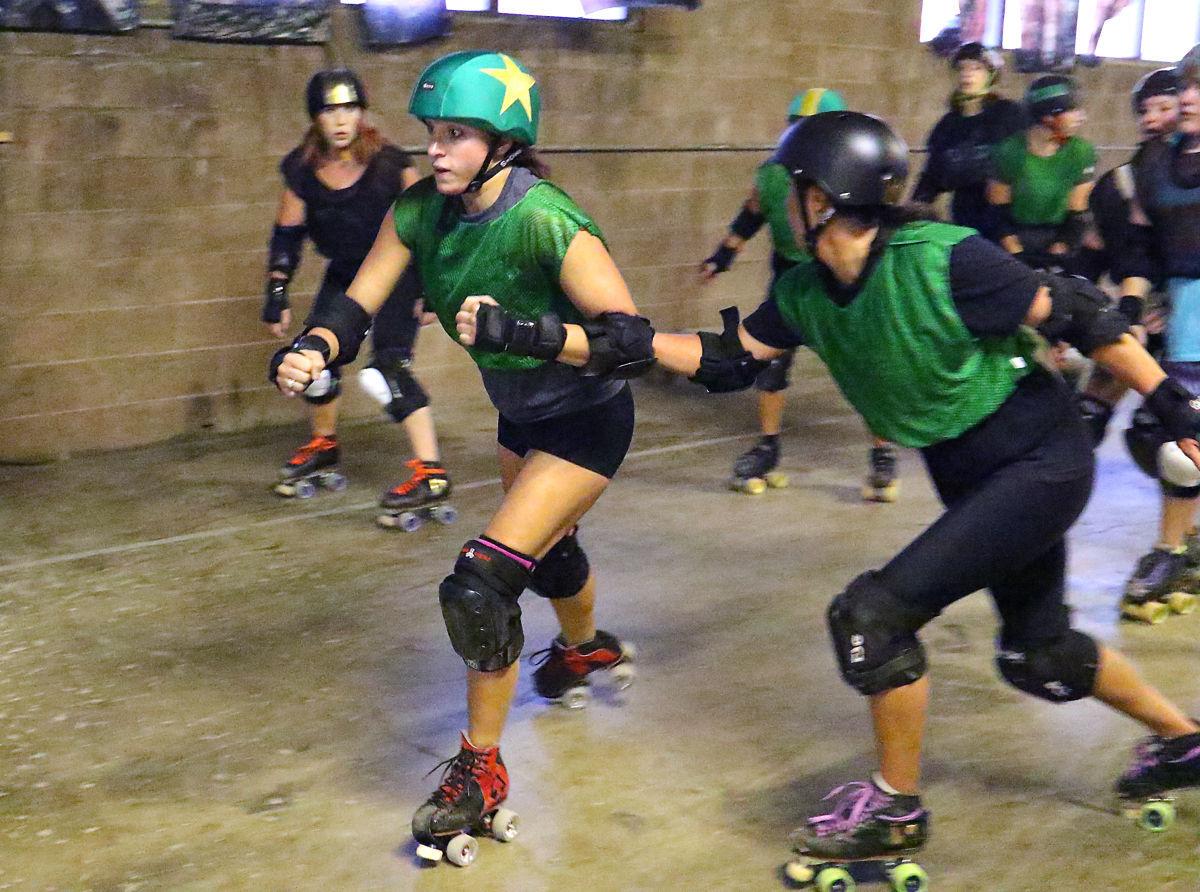 A star on Melissa Kindt’s helmet marks her as the jammer as she skates through Copper City Queens pack blockers. Points are scored every time the jammer clears the opposing team’s blockers. 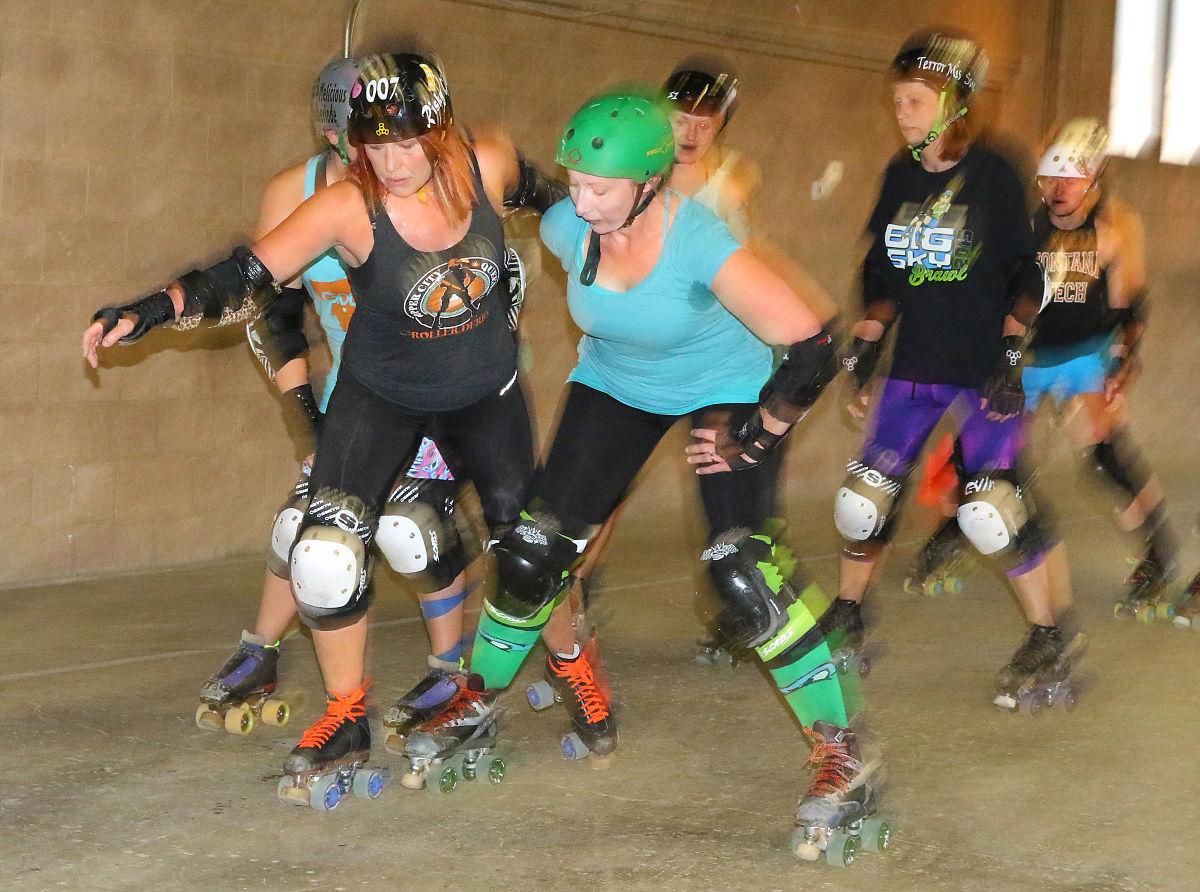 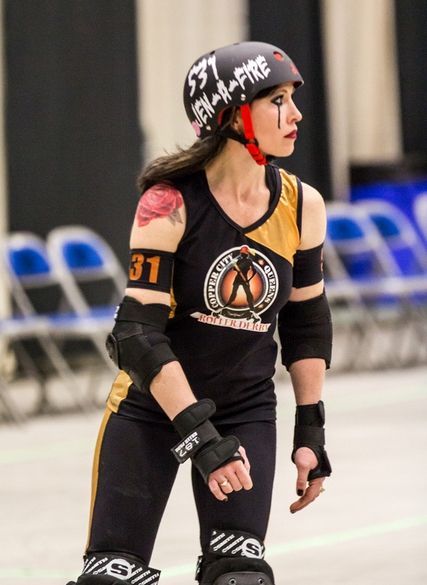 When you lack a permanent home, but you roll on with guts and glee, you’re Butte Tough.

The Copper City Queens Roller Derby team, still in its infancy, competes, trains and schedules bouts despite the lack of a safe space oval track to call its own.

Flat track roller derby requires a 108-foot long by 75-foot wide space, preferably on smooth concrete, but the resilient Copper City Queens have skated on everything from tile to wood floors.

“We’ll skate on pretty much anything that’s smooth and flat and doesn’t have a lot of gouges in it,” said club President Jen “Jen-A-Fire” Kueffler, a member since the club started in 2014.

“Concrete is the best. There’s been a lot of concern from people with hardwood floors, but our tires do not ruin the wood floors. We don’t wear the skates outside, so they don’t get rocks or dirt on them. Plus our knee pads have plastic covers.”

In its most recent bout, the young club suffered a 362-46 point shellacking, a lopsided loss to the Billings Roller Derby Dames.

But the playing surface was primo: a polished basketball court at the Al Beedo Shrine Auditorium in Billings. Despite the hardnosed reputation of roller derby skaters, the floor stayed in tip-top shape.

“We played a whole tournament there,” added Kueffler.

Players adjust their eight-wheel quad skates for each playing surface, including outdoors.

“The slipperier the surface, the stickier the wheel,” she said. “But if we’re on hardwood floors, we use a harder wheel so it will slide. That way, if we put our foot down and fall, we don’t break our ankles.”

A member of Copper City Cross Fit and the Butte Bar Bell Club, the redheaded McGregor is in exceptionally good shape. She skates, blocks and rocks and rolls with the best of them.

But she wishes the sport would have sprung up during her youth.

“I’m in amazing shape,” said McGregor. “If I could have done this 20 years ago, I would have wanted to be one of the best ever. It’s too bad I found it late in life.”

Other players range in age from early 20s to 40s, then there’s another 50-something on the squad. McGregor’s stage in life gives her a leg up, she said.

“Because I’m my age and I don’t have little kids at home, I feel that I can give 150 percent,” added McGregor. “I’m kind of the outspoken leader. I think the girls look up to me because I work out hard and I’m older.”

Angela Wells founded the Copper City Queens in 2014. The club is playing catch-up to many other Montana clubs that have existed longer.

“All the teams across the state have really reached out to us to help us understand the derby,” McGregor marveled. “They’ve helped us become more competitive. That kind of camaraderie and spirit really exists in the derby world, unlike in other sports.”

The Copper City Queens have so few players – 14, plus two alternates – that sometimes a blocker has to relieve a jammer when fatigue becomes an issue.

But the club is making strides, so to speak. A more experienced player from another town told Kueffler the Copper City Queens are on the right track.

A member since the beginning, McGregor sees the rough-and-tumble sport as a chance to learn a sport and benefit Butte.

“For me, it’s the ability to pursue being an athlete,” McGregor added. “It’s truly an athletic sport that has allowed me to compete with competitive women and encouraged me to be in better shape physically and mentally.”

But a sports background is not required.

“Some of the girls have an athletic background, but most don’t,” said Kueffler. “What’s important is the camaraderie of the team. We will take anyone and train them to skate.”

The club holds a conditioning clinic and scrimmage on Saturday, Oct. 3 at its temporary training facility in an abandoned garage in Rocker.  Jessi “Taco Truck” Gates Brock of the Hellgate Roller Girls in Missoula will conduct the training.

Gates Brock, a 1999 Butte High School graduate, danced and played basketball in her prep and college careers. She played against the Butte squad in its inaugural 2014 exhibition fundraising match that introduced roller derby to locals.

She’s thrilled to see the Copper City Queens grow as a team and learn inside roller derby because the sport sees a lot of turnover.

Roller derby is not for the faint-hearted. It’s also time-consuming.

“It’s hard to learn and hard to play,” said Gates Brock. “It’s very physically and mentally demanding. If you can do the work and take the pain, it’s a lot of fun. It’s the most fun I’ve ever had.”

Since Butte has no officials, the squad hails refs from Bozeman and elsewhere. Usually, the club pays gas and pizza money only, so dedication to the derby is key.

“To make it a real scrimmage as much as possible, to play a real game,” said McGregor. “It’s really an amazing community.”

In the less-than-regulation size practice space, players are forced to dodge a padded wood stove. In a former pawn shop, they eluded a built-in bookcase that they jokingly refer to as “getting filed” when they struck it, mid-skate.

The Copper City Queens is a nonprofit whose mission is to hold fundraisers for everything from Mariah’s Challenge, Empty Bowls, Safe Space garage sales, animal shelter adoption, festivals and breast cancer events.

So the big draw is twofold: a chance to compete on a strategic team – complete with mandatory helmet and elbow, knee and wrist pads – and usually colorful attire.

Each team puts five players on the track – four blockers and one jammer, a good skater who scores points by passing opposing blockers.

Match strategy can get complex – and one of six referees can send a player into a 30-second penalty box for illegal blocking, hockey-style.

“That’s the other side of it – we’re not just a team,” said McGregor. “Anything we fund raise, we give half to charity.”

“I’m in amazing shape .. if I could have done this 20 years ago, I would have wanted to be one of the best ever. It’s too bad I found it late in life.”

On Saturday, Nov. 7, the Copper City Queens plan a home bout against Heart Mountain Wreck on Wheels of Cody, Wyo., at the Butte Civic Center at 7 p.m.

Cost to the public will be $10 to $14 for adults and free to kids. The Civic Center arena will be a regulation-size 108-foot long, 75-foot wide oval track, said Copper City Queens President Jen Kueffler.

More matches will be scheduled after the first of the year, when the season seriously kicks in.

On Oct. 24, the team will host a breast cancer awareness fundraiser at the Dublin Bar starting at 7 p.m. More details are forthcoming.

The Copper City Queens are not sanctioned by the Women’s Flat Track Derby Association, but www.WFTDA.com requires that any player trying out for a team must pass a WFTDA skills test and a written test to make the team. The players also have personal and WFTDA insurance.

The team mission emphasizes teamwork, wellness and promotes a sense of individuality.

Editor's picks: Here are The Montana Standard's top stories for the week of Oct. 2 through Oct. 9.

Kaleena Miller tightens the laces on her skates during a break at roller derby practice.

Melanie Maki, also known as "Melicious Motherlode," takes a break after an hour of skating practice.

A star on Melissa Kindt’s helmet marks her as the jammer as she skates through Copper City Queens pack blockers. Points are scored every time the jammer clears the opposing team’s blockers.