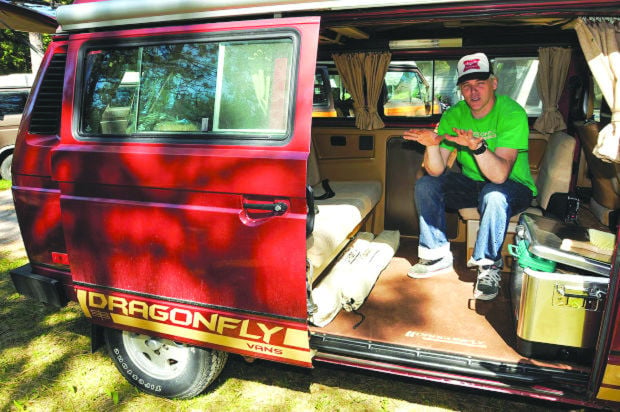 Scott Quinnett sits in one of his rental Volkswagen camper vans last week at his home and company headquarters near Bonner. Dragonflyvans rents refurbished and customized 1986-87 Volkswagen Vanagon Westfalia Weekenders fully equipped with sleeping bags, camp stoves and other necessities to travelers who want to hit the road. 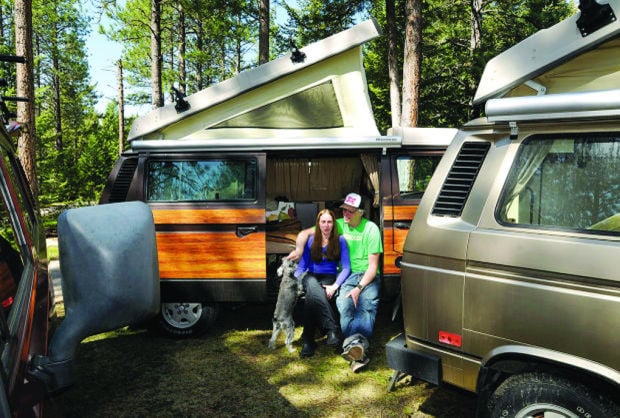 Quinnett and his wife Rachelle, who handles marketing for Dragonflyvans, say the vans are perfect for small families and other tourists who arrive by air and want to tour Glacier and Yellowstone national parks.

By Jenna Cederberg of the Missoulian

Rachelle and Scott Quinnett completed a complicated move this winter, relocating their two young children and all their belongings along with a budding business from Coeur d’Alene, Idaho, to just east of Bonner.

The move included driving 17 vehicles across two mountain passes in the middle of winter. The majority were two-wheel-drive vintage Volkswagen camper vans that make up their Dragonflyvans fleet.

Dragonflyvans is the brainchild of Scott, who turned his love of the iconic vehicles into a business several years ago when he started renting out vans that he refurbished and stocked with camping equipment.

Most of the vans are parked in front of the Quinnetts’ new home outside Bonner on Montana Highway 200, a place Rachelle found after an intense search.

“This is our final move, we bought the property,” she said.

Dragonfly found its niche in the past several years renting vans to campers coming to the Northwest to see the sites.

“Who seems to be finding us are small families and they want to go sightseeing,” Scott said.

The move from Coeur d’Alene to Missoula was a logistical one, as it brought the vans closer to where most Dragonfly clients want to go: Glacier and Yellowstone national parks.

Instead of having customers fly into Spokane, Wash., taxi to Idaho and then head east toward the parks, the Quinnetts’ now plan to meet customers at the Missoula International Airport so they can pick up their vans and be in Glacier the same day.

“All you need to do is stop at the grocery store,” Rachelle said.

Dragonfly has eight vans for rent during the summer season. Each has a name — Shadowfax, Nuthouse, River Room, Homespun and Longshot are among them — and is outfitted with an entire set of camping gear, including everything from a wine bottle opener to a collapsible trash can.

The bedsheets and towels are under the bench seat in the back where two people can sleep. Each van also has a pop top to create sleeping space for two more. A Coleman camping stove is hitched to a carrier attached to the back of the van.

Creature comforts include flashlights, toilet paper and a CD player with an iPod-ready function.

Although out-of-towners use the vans most, they’ve been used by a wide variety of outdoor recreationists, Rachelle said.

“It’s endless outdoor opportunities that these make easier,” she said.

The vans aren’t RVs — that’s important because RVs have limited access to many campgrounds, Scott said. Customers must be 25 years old to rent. It costs $1,265 a week to rent a van.

A longtime surfer, Scott used vans to explore and surf throughout the country. He started working full-time on cars after phasing out of a career as a child psychologist.

“As important as I think that work is, I realized it probably wasn’t my best role,” he said.

He has worked as a mechanic for both Audi and Go Westy, a company that specializes in producing parts, accessories, sales and service for Volkswagen campers before moving his family back to Seattle.

Scott’s extensive knowledge of the vans is crucial to making Dragonfly work. But his love for the experience Volkswagen vans offer is what he loves most about the business.

“When you get behind the wheel and you realize you have everything you need with you, the whole world becomes an adventure. Time and calenders just kind of fall away,” he said.

Repeat customers who use Dragonfly include a couple from San Francisco that called Dragonfly the Ritz Carlton of camping vans and a man from Washington, D.C., who rents Shadowfax the same week every year.

“He said if he didn’t show up (during that week) to assume he’s dead,” Scott said.

With the help of loyal customers and recommendations through word of mouth, Dragonfly “turned a corner” last year and became profitable, Scott said.

Scott is planning to build a shop outside his home and continue to work on the other vans he’s purchased. He has eight vans he plans to fix up and have available for backups to the current fleet. Hiring employees will come next, he said.

Rachelle is taking over the marketing end of the business.

As for the Dragonfly vans, they’ll start making their first trips into the wilderness in several weeks.

Scott hopes that drums up even more business.

“Our best marketing is our vans being on the road,” he said.

Scott Quinnett sits in one of his rental Volkswagen camper vans last week at his home and company headquarters near Bonner. Dragonflyvans rents refurbished and customized 1986-87 Volkswagen Vanagon Westfalia Weekenders fully equipped with sleeping bags, camp stoves and other necessities to travelers who want to hit the road.

Quinnett and his wife Rachelle, who handles marketing for Dragonflyvans, say the vans are perfect for small families and other tourists who arrive by air and want to tour Glacier and Yellowstone national parks.