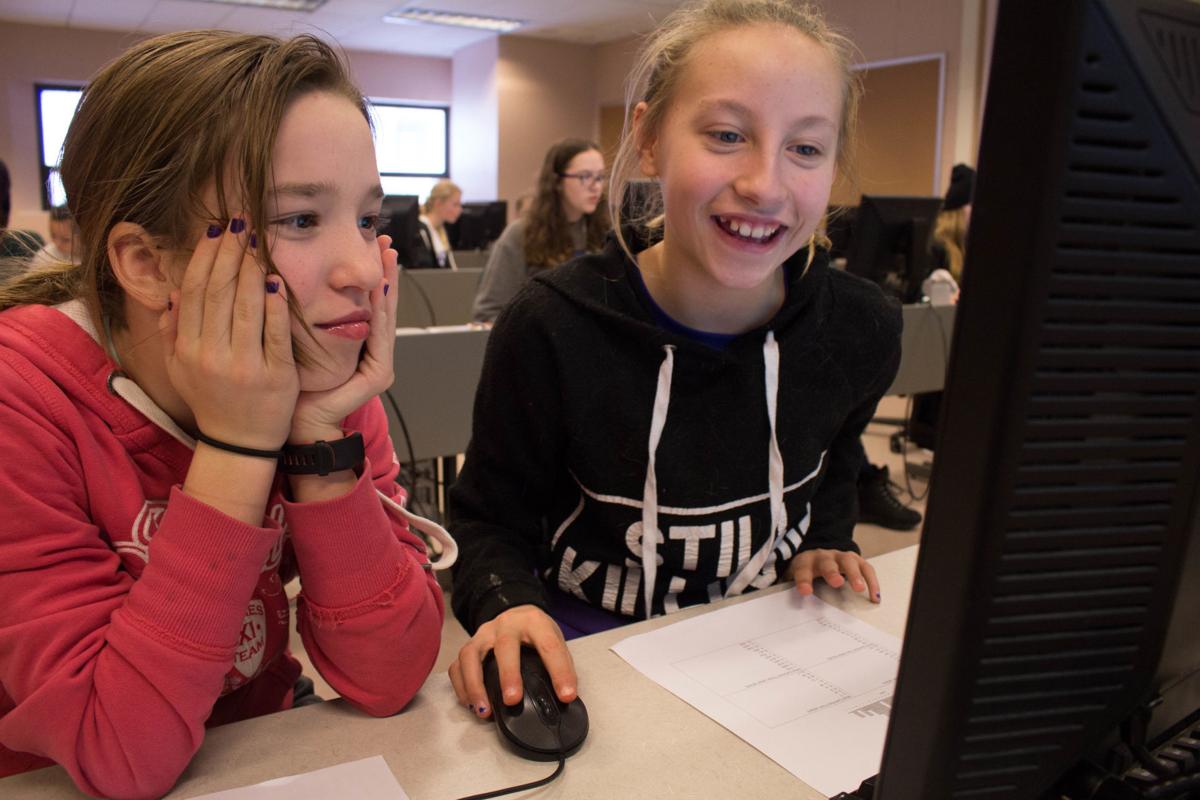 From left, Kimberly Breitbach, 11, and Danika Carr, 10, work together to decode four cryptograms during the most recent GEMS Club meeting. 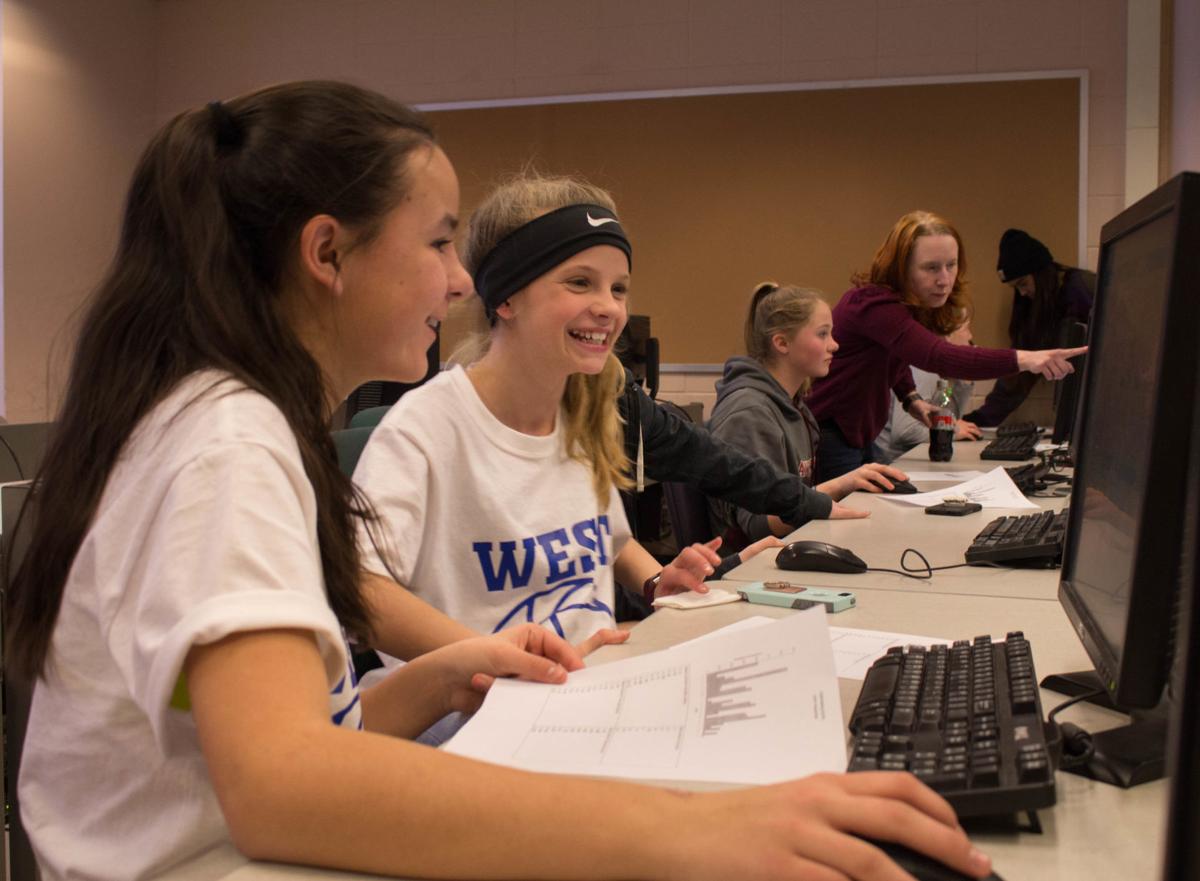 From left, Elli Quist, 11, and Ally Kukay, 11, work to decode cryptograms during the most recent meeting of the GEMS Club, which aims to empower girls through math and science.

Leggings and boots, a hunting camouflage hoodie sweatshirt, basketball shorts and team shirts, and painted fingernails stuck out from behind desks and computer screens on a recent afternoon in a Montana Tech computer lab, where 13 teenage girls gathered for Girls Excelling in Math and Science Club. They worked together to solve cryptogram word puzzles by detecting patterns and using contextual clues.

Two of these girls were Elli Quist and Ally Kukay, both 11. This was their second year with the club, and they had just come to the recent late afternoon meeting from basketball practice.

“It’s a great way to make new friends and a good way to branch out,” Quist added. “And it’s a way to power up against the boys.”

From upcycling sweaters into Christmas stockings to dissecting frogs and starfish, the GEMS Club offers fifth- through eighth-graders a hands-on introduction to the STEM fields and aims to empower young women interested in math and science.

Ronda Coguill, director of GEMS, said she and a friend started the club in 2014 with grant funding from the Women’s Foundation of Montana as a place where girls can participate in science and engineering activities in a safe, enriching environment.

Five years later, Coguill said that mission to promote STEM learning, innovation, and creativity is the same, though the curriculum changes year to year.

“The saying I always use is, 'We remove the competition to compete,'” Coguill said. “These girls are fiercely competitive, but here they don’t have to compete to be heard in the first place.”

Coguill explained that she has spent the majority of her career as a materials scientist as the only woman in the room. Through the GEMS Club, Coguill hopes to empower young women by showing them their place in that room is justified -- and that they can think just as inventively as anyone else.

“We try not to get too preachy; we just lead by example,” said Coguill, who runs her own technology and engineering business in Butte with her daughter.

Risser explained that she was one of four women who graduated alongside 40 men from the Computational and Applied Mathematics program at Southern Methodist University in Dallas, Texas.

According to the National Science Board’s 2018 Science and Engineering Indicators report, women remain underrepresented in the science and engineering workforce, though less so than in the past.

For Risser, the GEMS club is an opportunity to show women they can excel in these male-dominated fields while also introducing them to women role models.

Magallón has volunteered with the GEMS Club for the past two years. She said that working with the club provides a good way to share personal experiences from the field with the young women, and she hopes to bring in a panel of women scientists to talk with the GEMS girls.

“This club is a privilege for these girls and exposes them to a lot of different activities,” Magallón said, noting that it’s often hard to get exposed to STEM at a young age. “It’s also a great way to give back to the community.”

Magallón was an English-as-a-second-language, or ESL, student. She said working with numbers and hands-on learning came easier for her and that she pursued an engineering degree because it suited her strengths. But she noted that it isn’t easy being a woman in the field.

“I feel I always have to work two times harder to prove I’m doing things correctly. … I end up second guessing myself and putting in more effort,” Magallón said.

There’s a club for college women in engineering on Tech’s campus, too. The Society of Women Engineers is made up of about 30 women enrolled in various types of engineering programs. The variety is what makes the club unique, said Lily Birch, SWE’s president. A few weeks ago during National Engineers Week, Birch talked about how the Tech society is a good way for women engineers to connect on campus and that the group plans to become more involved with the GEMS Club.

“It’s hard for them to understand what STEM really involves,” Birch said, referring to middle and high school students. “You don’t have to go into research; you don’t have to work for NASA. There are so many different things you can do.”

Birch went on to explain that the lack of knowledge related to potential STEM job options is especially true with engineering. She believes people don’t understand the different engineering types and job possibilities out there. Even Birch herself didn’t learn much about the field until she got to Tech, she said. That's why she and the Society of Women Engineers want to help the GEMS Club members and other teens better understand these possibilities, Birch said.

“We want to do more school outreach and explain what students can do at Tech … not even targeted at girls, necessarily, but for everyone,” Birch said.

While outreach for all is important, two members at the recent GEMS Club meeting talked about how meaningful it is to have an all-girls club.

“I feel like there are a lot of clubs that are only boys, so having a club with just girls is nice because we can all relate to each other,” said Danika Carr, 10.

As the first-year GEMS members worked to decode the cryptogram on the computer in front of them, they talked about all of their favorite club experiments thus far, how they felt it was important to have clubs, and how they viewed science, often finishing each other’s sentences.

Breitbach said, “You can learn so many things through science, it’s just...”

Butte resident Dana Reavis gathers 33 models and a team of volunteers for a fashion show celebrating women with disabilities for Butte Women's Day.

A bill to ban mining, importation, use, and sale of asbestos was introduced in both the House and Senate Tuesday, and at first blush it seems …

Speak up: Walkerville residents asked to weigh in on no-shooting zone

Walkerville residents can still weigh in on a proposal to include the town in a no-shooting zone that now covers urban Butte and some outlying areas.

On a recent morning in the Butte Central elementary and middle school principal’s office, Caden Piccin, 12, talked about flowers.

From left, Kimberly Breitbach, 11, and Danika Carr, 10, work together to decode four cryptograms during the most recent GEMS Club meeting.

From left, Elli Quist, 11, and Ally Kukay, 11, work to decode cryptograms during the most recent meeting of the GEMS Club, which aims to empower girls through math and science.