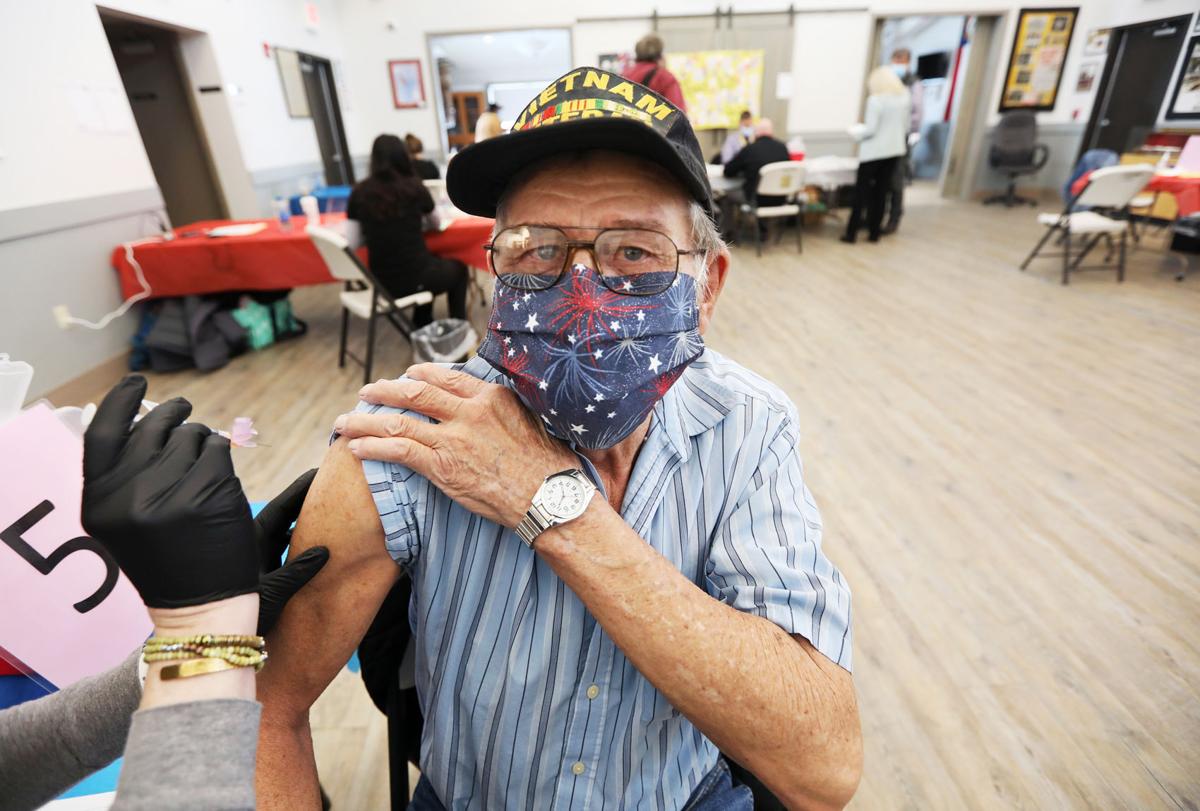 William Jarvi, a Vietnam veteran, holds up his sleeve after getting his first COVID-19 vaccination on Thursday at the American Legion in Butte. Jarvi is one of over 200 Butte-area veterans who were scheduled for vaccinations by staff from the VA Medical Center in Fort Harrison. 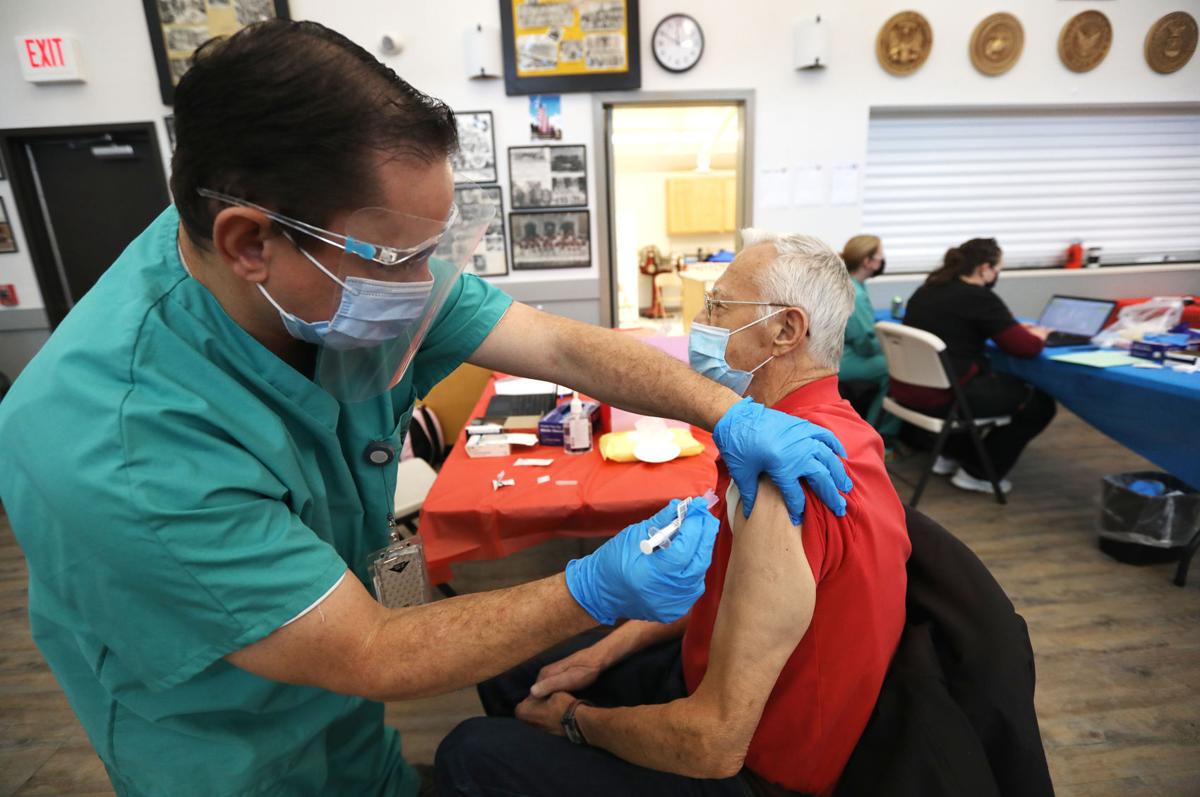 Todd Weber, the nurse manager for the Residential Rehabilitation Treatment Program for the VA Medical Center in Fort Harrison, gives a COVID-19 vaccination to Charles Fournier on Feb. 25 at the American Legion in Butte. "I'm just glad to get (the vaccination done)," said Fournier, a Navy veteran. 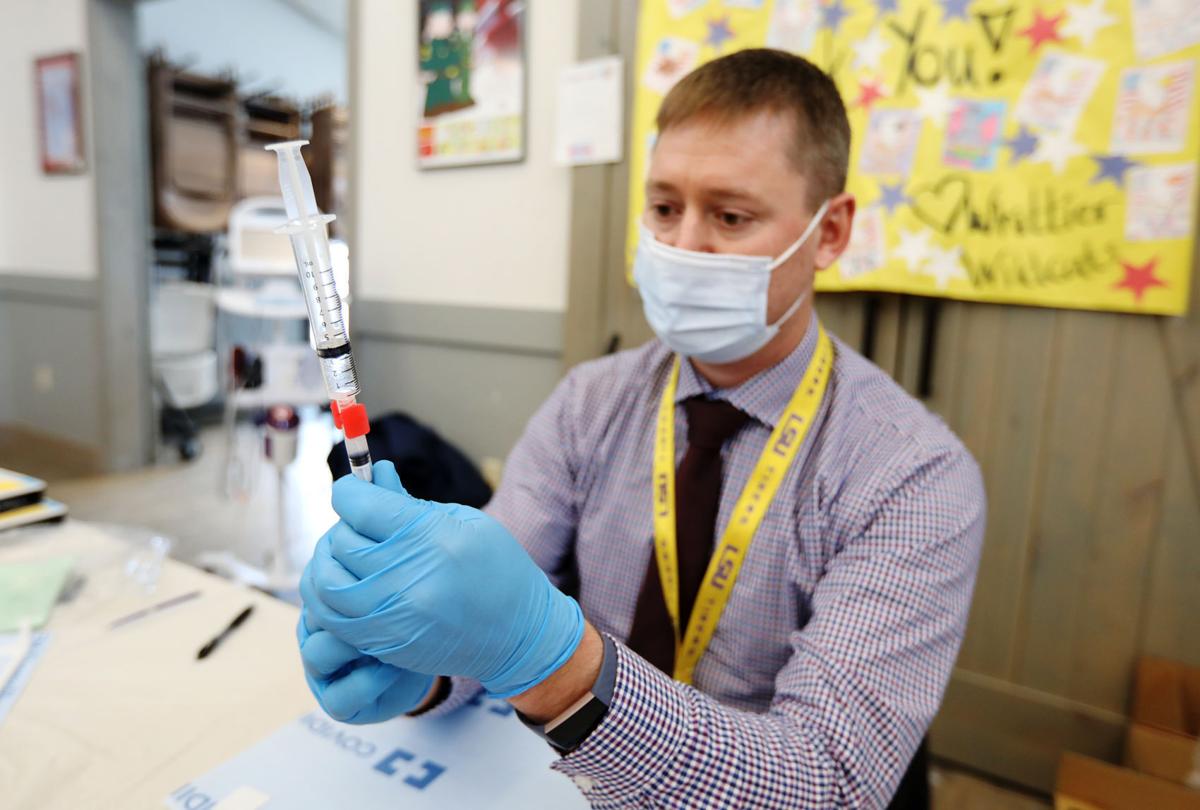 Travis Pfenninger, a pharmacist at Fort Harrison, fills a syringe with a the COVID-19 vaccine on Feb. 25 at the American Legion in Butte for a veterans vaccination clinic.

They served our country, and Montana Veterans Affairs served them a shot in the arm.

On Thursday, 209 local veterans signed up for the first Butte-area COVID-19 vaccine clinic. They turned out at the American Legion Silver Bow Post #1, took their first dose of vaccine in the company of fellow vets, and left one big step closer to getting back to normal life.

A resident of Opportunity, Jarvi takes things as they come, including the pandemic. Getting his vaccine was most of all about protecting others, he said.

“Hopefully I won’t get it and give it someone else, basically that’s my biggest concern,” Jarvi said. “I’ve lived a good life.”

Veterans signing up for the clinic ranged in age from 90 to 33. The VA follows U.S. Centers for Disease Control and Prevention guidelines for priority, aiming its first clinics on the senior veterans and those with underlying health conditions.

There were 12 female veterans scheduled at the clinic. Madge Warne, 63, received the clinic’s 100th vaccine of the day.

Warne, who lives in Deer Lodge, served in communications for the Army from 1981-1984, stationed at Fort Bragg in North Carolina. She retired as a Specialist E4.

“I was actually 23 years old when I went in. I was bored where I was, and I wanted something to happen in my life. And when I joined the Army, I did get an adventure,” she said.

She worked in an office, but the fun didn’t stop there. As part of her training, she also jumped out of planes. For Warne, the vaccine is all the more important because so much is yet unknown.

“Because we don't know the future. We don't know what's going to happen as far as the virus. It could mutate, it could get into something else. This is just one more form of protection,” she said.

The hardest part of the pandemic has not being able to travel and see family, Warne said. That sentiment was echoed throughout the clinic.

Dan Zahn, 75, a boiler technician 2nd Class in the Navy from 1965-1969, has had to skip the birthdays of grandchildren during the pandemic to protect his health. He lives southwest of Butte.

Though he believes he already had the virus, Zahn is still concerned about the variants, as he is immunocompromised.

“You don’t know what life will throw at you,” he said.

The vaccine is of incredible importance to those in his age group who served, Zahn said, as many like himself are living with the long-term health effects of Agent Orange exposure.

“That’s why my immune system is shot,” he said.

Zahn has had to have major surgeries, worked beside two 12,000 pound boilers in Navy ships during the war, and now relies heavily on hearing aids. Some of those he served with acquired asbestosis from the work at sea.

“This is a great day for Montana’s veterans who are now one step closer to being protected from the coronavirus,” said Sen. Jon Tester, D-Montana, Chairman of the Senate Veterans’ Affairs Committee. “I’m proud to have worked with folks on the ground and in the Administration to ensure these vaccines reach veterans in Butte and other rural areas across the state. The reality is that COVID-19 vaccines are our best shot at ending this pandemic, so I’ll be holding VA accountable in getting more doses to communities in need and into the arms of those who’ve served.”

Before Thursday, the VA had vaccinated 5,500 veterans in Montana, Rosine said, and Montana is home to the VA’s pilot program for rural vaccine clinics.

The day before, Todd Weber, nurse manager with the Montana VA Healthcare System, was on a small plane to Lewistown, babysitting a specialized cooler of vaccine.

“Every once in a while, the alarm will go off,” Weber said. Mid-flight he makes quick temperature adjustment to the cooler.

Weber is a veteran himself, serving as a medic in the Army, retiring as a Specialist E4. He vaccinated fellow veterans at the clinic in Butte.

For Weber, administering the vaccine has filled a big gap in his life left after his unit at Fort Harrison was closed before Thanksgiving to prepare for a potential surge in COVID patients.

“I get to interact with these veterans, learn a little bit about their story, and why they're getting this vaccine as well. It's really rewarding,” he said.

He gives the shots, they tell the tales.

“One veteran that came yesterday talked about his daughter that is making him get the vaccine. And because she's a healthcare worker in another state, he goes, this way I get to go see her," Weber said.

"I had a veteran at another clinic that was in tears talking about, now I can go see my grandkids," he said. "It's really a lot of stories about being able to get back out in the community and not feeling so scared."

The VA has given some veterans the chance to get the vaccine earlier than they would have been able to otherwise, Weber said, adding that some veterans who rely on the VA for medical care actually chose to wait until they could get their vaccine through the VA.

At the clinic in Lewistown, a 96-year-old and a 95-year-old World War II veteran were both vaccinated.

Those who received vaccines at the Butte veteran clinic are scheduled to receive their second dose in 28 days. The next first-dose veteran vaccine clinic for Butte is yet to be scheduled.

The sight of mule deer bounding across the foothills of the jagged Pintlers can enchant human witnesses. But an urbanized mule deer in Anacond…

Given that the shadows cast over education by COVID-19 seem to be in retreat, administrators for Butte School District 1 hope to reduce class …

William Jarvi, a Vietnam veteran, holds up his sleeve after getting his first COVID-19 vaccination on Thursday at the American Legion in Butte. Jarvi is one of over 200 Butte-area veterans who were scheduled for vaccinations by staff from the VA Medical Center in Fort Harrison.

Todd Weber, the nurse manager for the Residential Rehabilitation Treatment Program for the VA Medical Center in Fort Harrison, gives a COVID-19 vaccination to Charles Fournier on Feb. 25 at the American Legion in Butte. "I'm just glad to get (the vaccination done)," said Fournier, a Navy veteran.

Travis Pfenninger, a pharmacist at Fort Harrison, fills a syringe with a the COVID-19 vaccine on Feb. 25 at the American Legion in Butte for a veterans vaccination clinic.