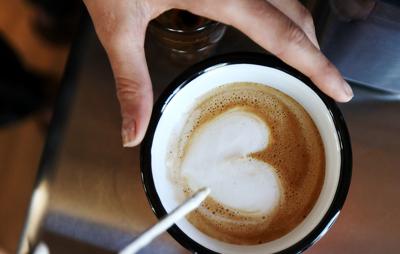 One can tell by its name that Perkeley Pit Coffee in Butte is an espresso house with a sense of humor.

Last year, a series of unfortunate events almost put the coffee shop, and its characteristic smile, out of business. But through it all, the shop has managed to keep on smiling, grinning in the general direction of the Berkeley Pit.

Today the Perkeley Pit is a sit-down coffee shop located roughly across the street from the pit viewing stand on Shields Avenue.

From paneling made from painted barn wood to an antique table that hails from the historic Columbia Gardens, the shop’s interior is chock-full of repurposed materials.

But that’s not all there is to write home about when it comes to the coffee shop. There are also the drinks, including signature concoctions like the Meaderville — a black tea featuring pineapple and chipotle — and the Dublin Gulch, a drink inspired by everyone’s favorite camping dessert — the s’more.

Randi Wedlake is the woman behind the Perkeley Pit, who started hatching plans for the business in July 2017.

She said she and her husband decided to open the modest coffee shop at 102 Madison St. because they noticed there wasn’t a place to stop for coffee along Shields.

But the Perkeley Pit is a coffee shop that almost didn’t happen.

Wedlake planned to open the shop in November of 2017 in an existing building on the property, but it was soon discovered that there were problems with the building, and the landlord needed to demolish it.

Rather than being deterred, Wedlake worked with the landlord, and together they came up with a plan to construct a new building on the land — a plan in which Wedlake and her husband agreed to take on some of the construction in exchange for a reduction on rent.

Another setback came July 2018 when Wedlake was laid off from her job at REC Silicon, just as the coffee shop was getting close to opening.

“I kind of took that as a door closing and another door opening — as an opportunity to get the place up and running, ” said Wedlake, who maintained a positive attitude.

Fortunately, the Butte resident was able to bounce back, landing a job at the Montana Department of Fish, Wildlife and Parks.

Finally the coffee shop was able to open in August 2018.

But in the months that followed, the small shop was besieged by a series of construction projects that reduced vehicle access to the business.

The breaking point finally came in March, when construction on utility lines for the new Berkeley Pit Polishing Plant blocked access points to the coffee shop.

During that period, sales were down 75 percent of normal, and, at its lowest point, the shop’s sale for the day added up to just $17.

Wedlake temporarily closed the shop. She didn’t know when she would be able to reopen, and all of her employees moved on as a result.

Wedlake works full time in Helena, so she wasn’t sure how she would be able to recruit and train new employees.

But the light at the end of the tunnel came in the form of a former employee, who agreed to temporarily come on board and do the hiring.

Thanks to those efforts, the Perkeley Pit reopened in May.

“It’s been really like a roller coaster,” said Wedlake, reflecting on the shop’s trials and tribulations.

The Montana Standard asked Wedlake if she felt like the Perkeley Pit was the little coffee shop that could.

Wedlake laughed. “Well, we do.”

“We get such great feedback from people,” she continued, noting that she’s received words of encouragement from both customers and business owners. “It’s really encouraging to hear all of the positive comments.”

The shop is now getting reacquainted with its customers.

“We’re kind of slowly but surely getting back on track,” said Wedlake, adding that she sees the shop as emblematic of the Mining City’s “Butte tough” spirit.

“I think that’s what Butte’s all about,” she said. “It’s perseverance.”

Also emblematic of Butte is the shop’s logo, which features the silhouette of the Bell Diamond headframe, which Wedlake said looks different from the other Butte headframes.

When it came to designing the shop’s interior, Wedlake wanted to create something rustic, warm and intimate — the kind of place where people can have a conversation or where they can sit back on the patio and watch as  trucks from Montana Resources roll by in the distance. In addition to café seating, the shop offers drive-through service.

Part of Wedlake’s business philosophy is to focus on made-in-Montana products. At the shop one can get tea from Lake Missoula Tea Co., and the coffee is by Montana Coffee Traders.

Among a host of goodies, food at the shop includes a savory scone with bacon, cheddar cheese and chives, along with rotating sweet scones made by a Butte-baker, Lori Stiffler.

Kaitlyn Kaiser is a barista at the Perkeley Pit and is among a group of employees who call themselves the “pit crew.”

Kaiser, a nursing student at Montana Tech, said she was studying one day at the Perkeley Pit when she heard Wedlake was hiring. The rest is history.

Berkeley Pit then and now

“I really love it,” said Kaiser, when asked about the job.

Kaiser said her favorite drink is the McQueen Bee, a honey and coconut milk latte featuring lavender and a sprinkling of cinnamon. The shop also offers growlers of cold brew, which is less acidic than regular coffee and can be taken home and rehydrated.

Another drink, Pit Water, features drip coffee with shots of espresso. The drink even comes with a hashtag, #DrinkPitWater, which has gone on to become a calling card for the coffee shop.

And no — the coffee shop doesn’t actually get its water from the Berkeley Pit.

Wedlake said the hashtag is merely a nod to the business’s sense of humor.

With a $19 million price tag attached, Atlantic Richfield Company prepares to discharge mine waste water from its brand new polishing plant in…

Five-star reviews of the Berkeley Pit

If you're wondering what all the fuss is about above uptown Butte, read some of these glowing reviews of one of the most popular destinations … 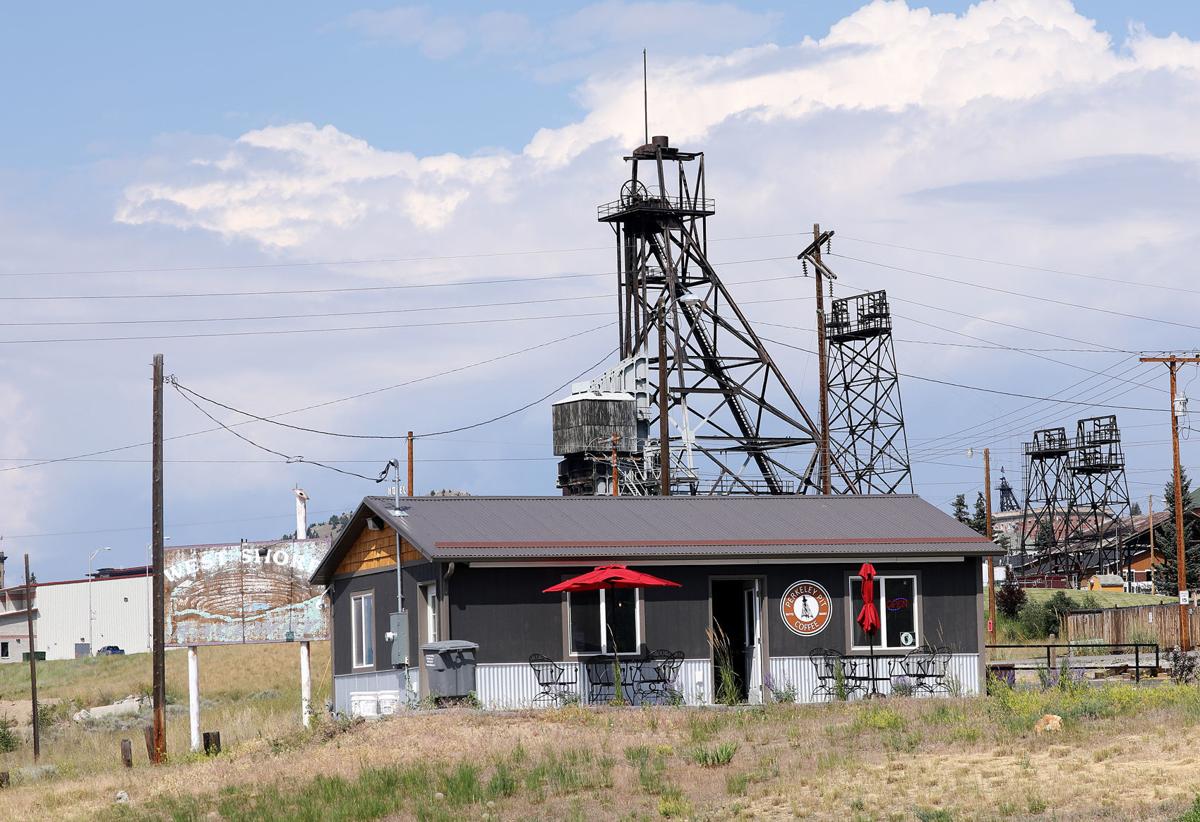 The owners of Perkeley Pit Coffee in Butte say they saw an opportunity to contribute to the community by building their business in an industrial area located on Shields Avenue across from the Berkeley Pit viewing stand. 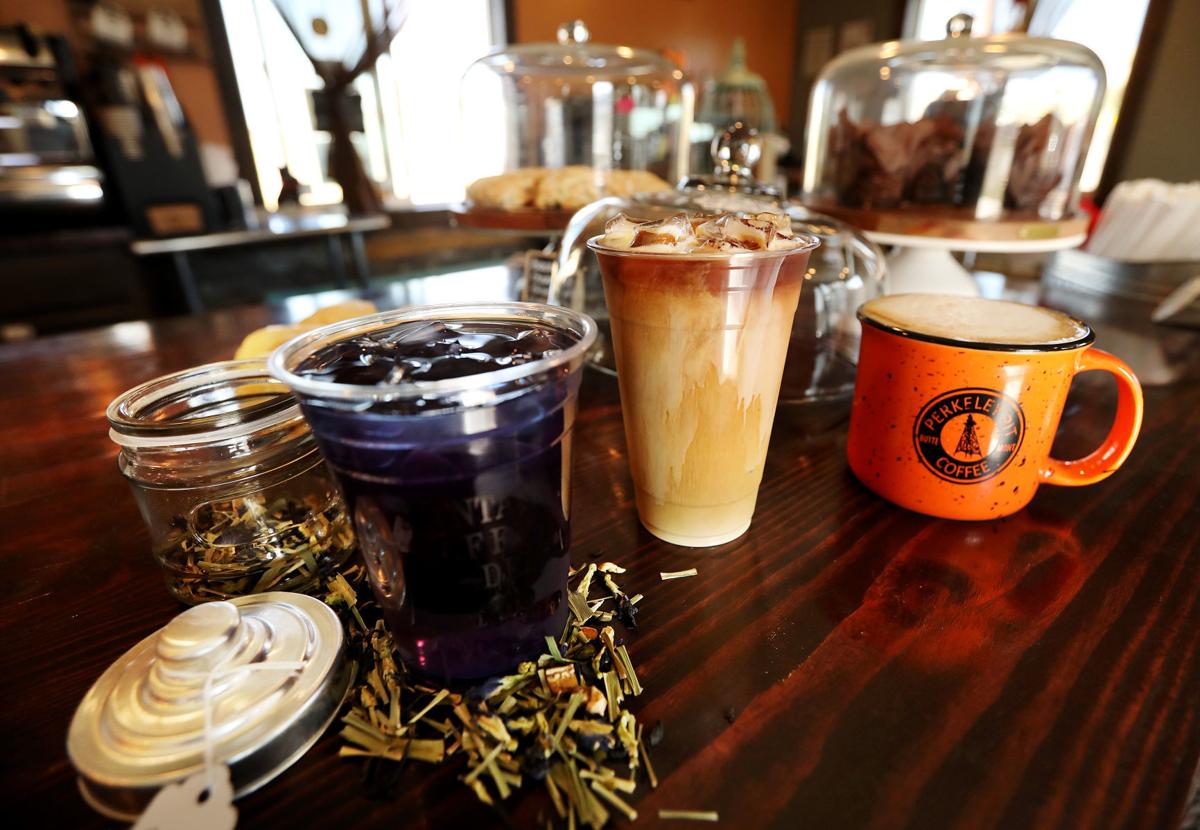 Pictured are several drinks available at Perkeley Pit Coffee in Butte. From left the striking iced herbal tea called Bodacious Blue Butterfly Pea Tea, at center is an iced Americano and in the speckled orange ceramic mug is a latte. 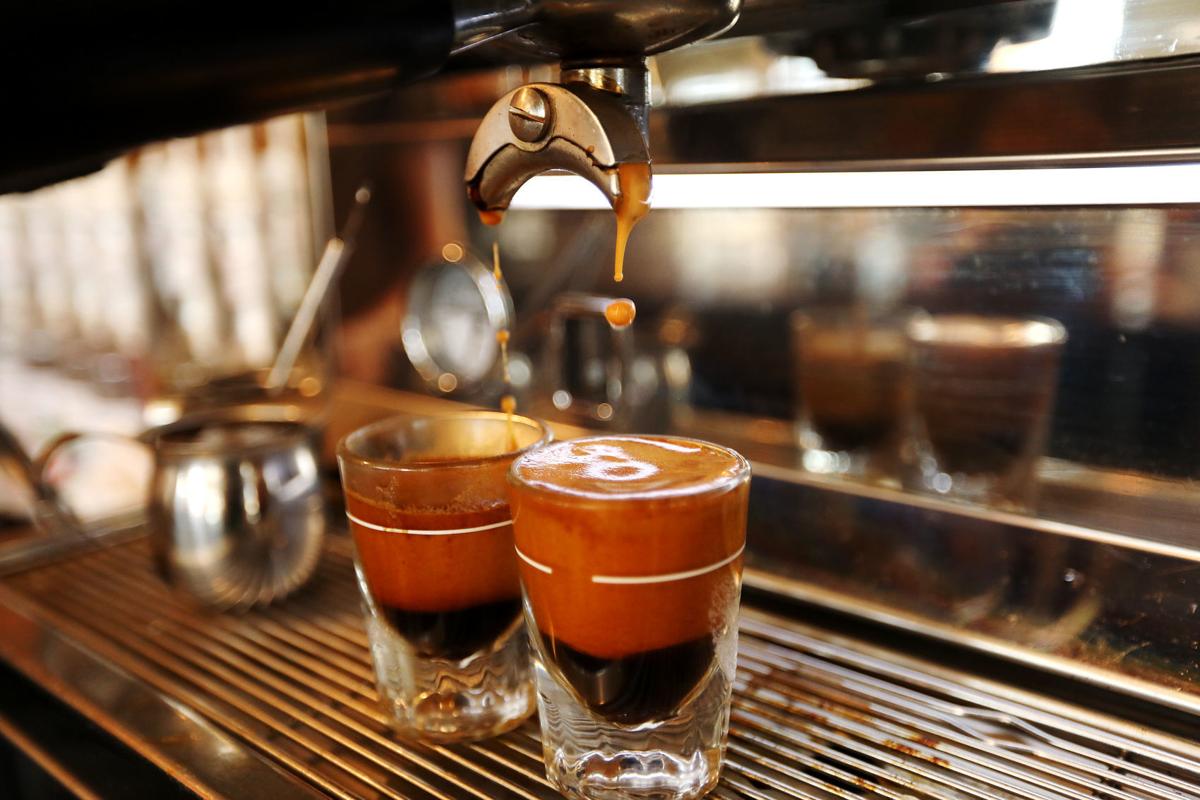 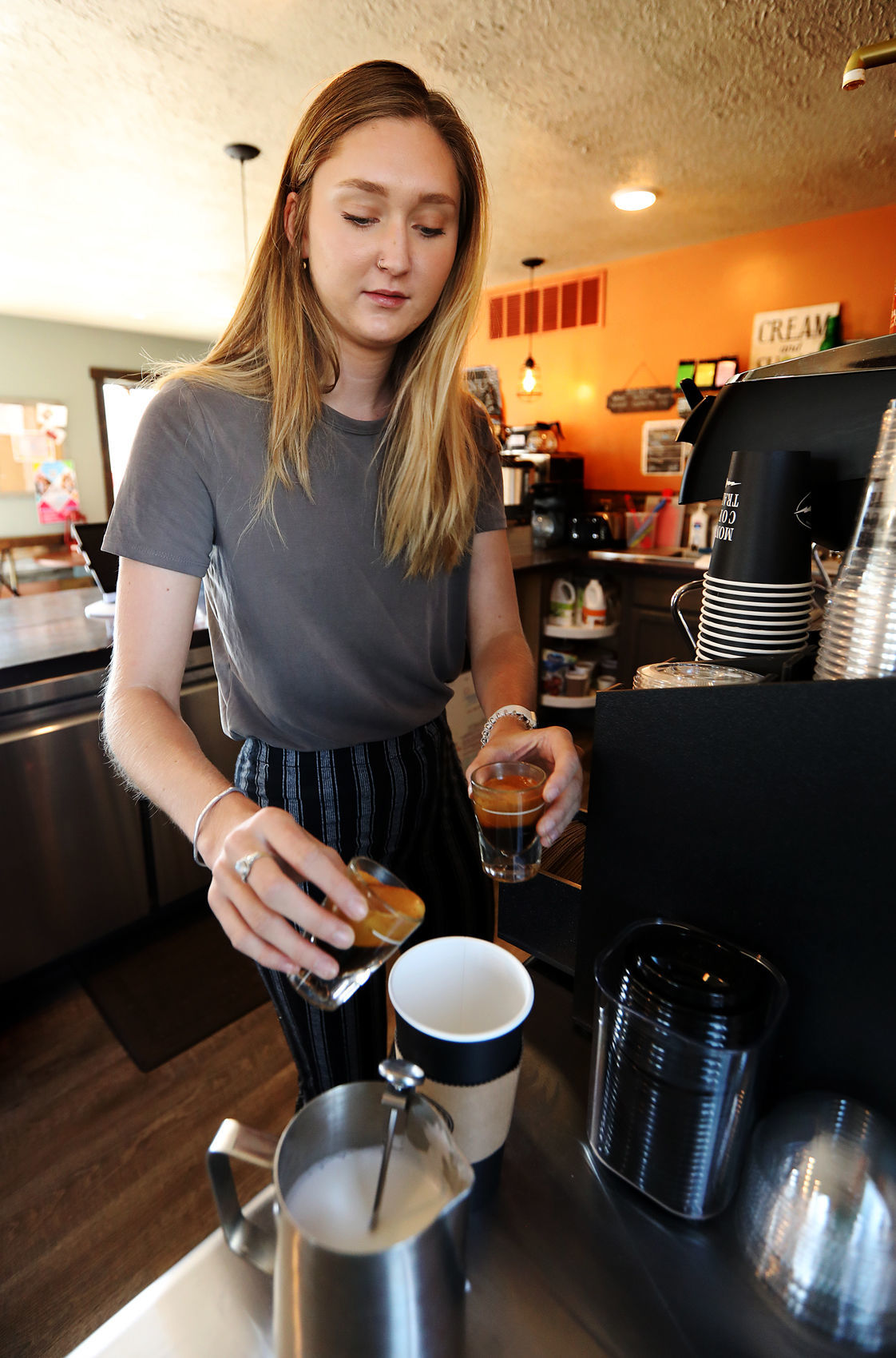 Kaitlyn Kaiser makes a latte on a recent morning at the Perkeley Pit coffee shop in Butte. 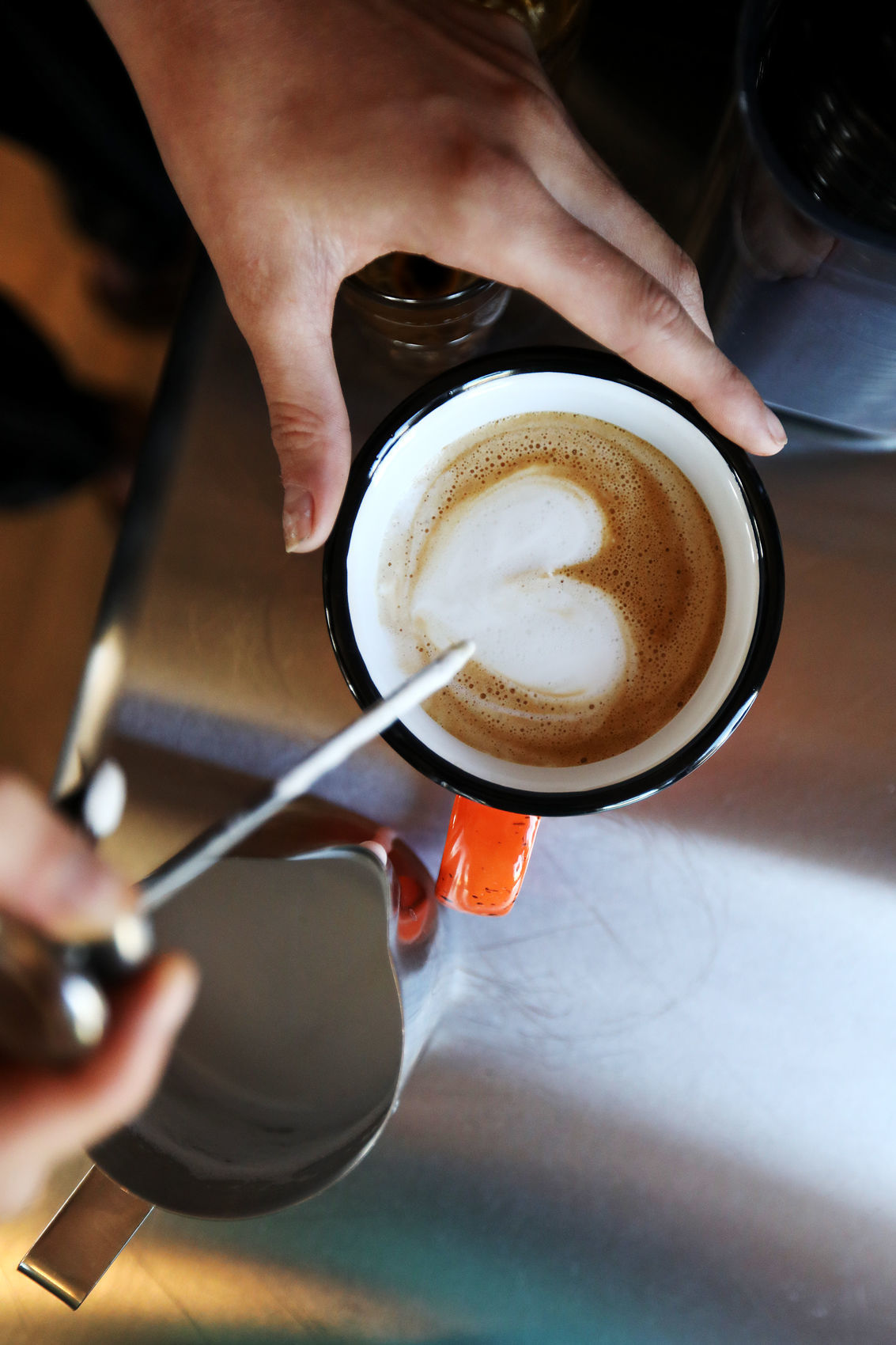 "We named our business Perkeley Pit Coffee because we are located right across the street from the Berkeley Pit viewing stand and at first my husband suggested it as a joke but everyone loved it so much it stuck," says owner Randi Wedlake. 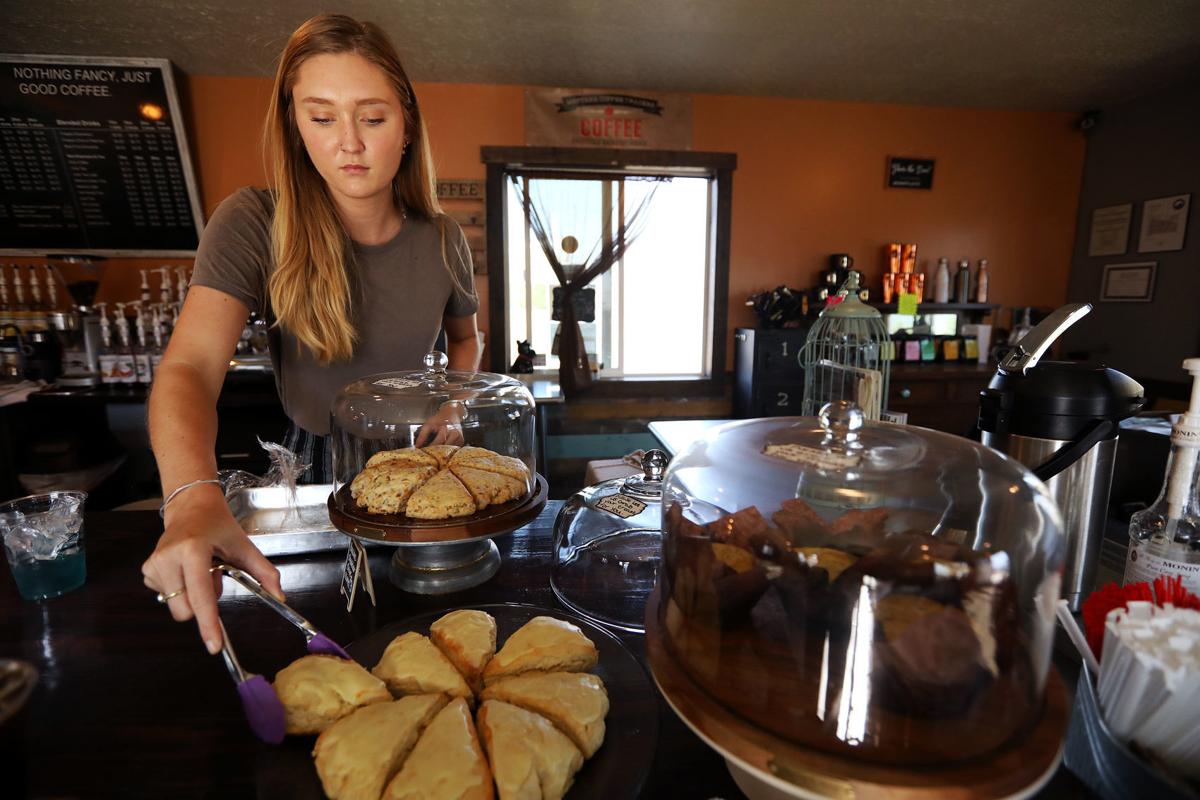 Kaitlyn Kaiser, a barista at Perkeley Pit Coffee, sets out pastries on a busy morning at the Butte coffee shop. 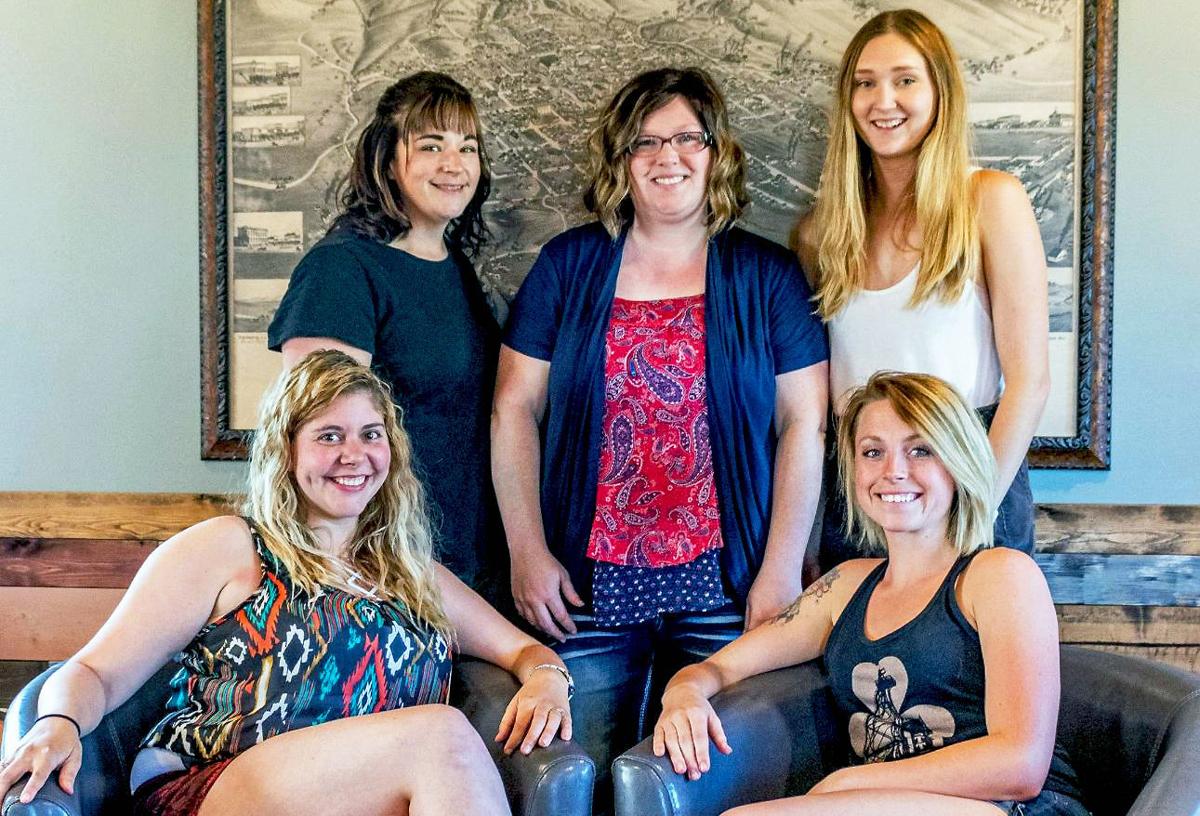