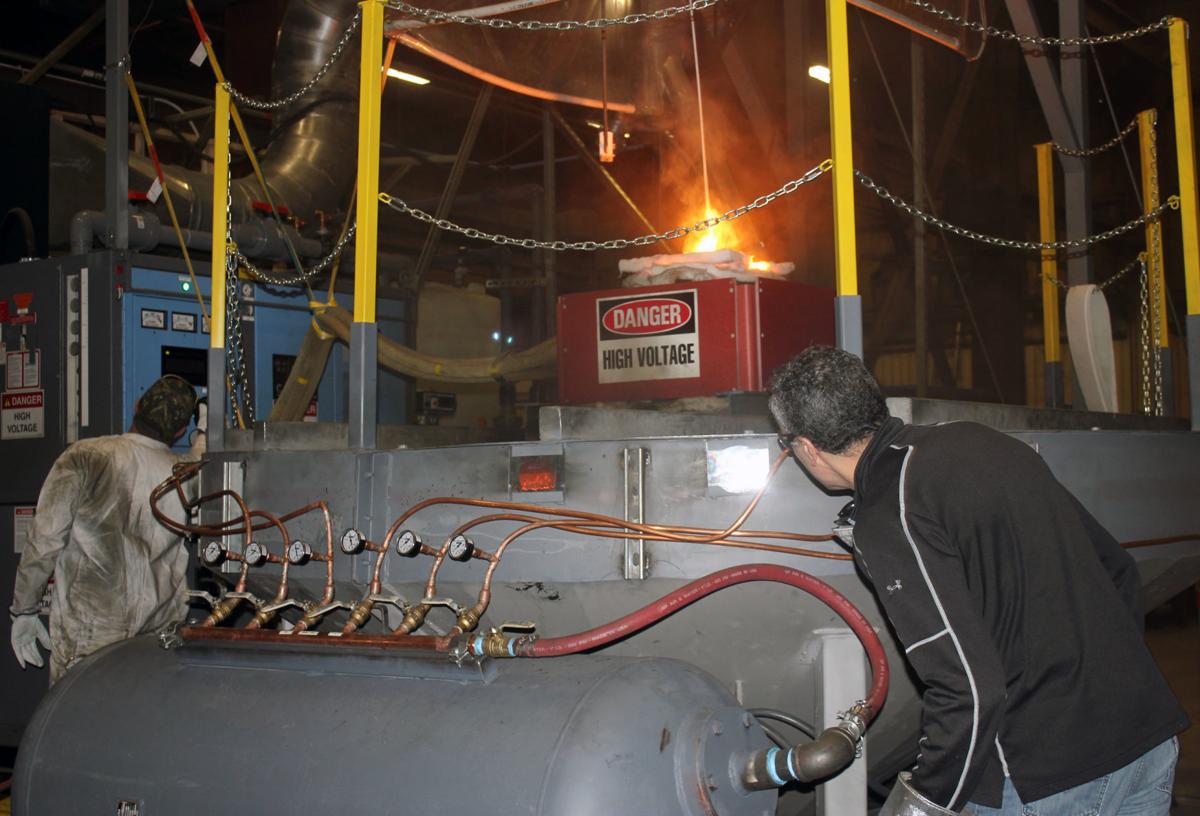 Premier Industries Engineer Dan Tabish (on the right) is looking through a window in the atomizer to watch the slag turn into proppant, a tool for the fracking industry. The Butte pilot project at J. K. Fabricators to "perfect the process" of turning Anaconda's waste material from smelting into useful products and a business is underway. 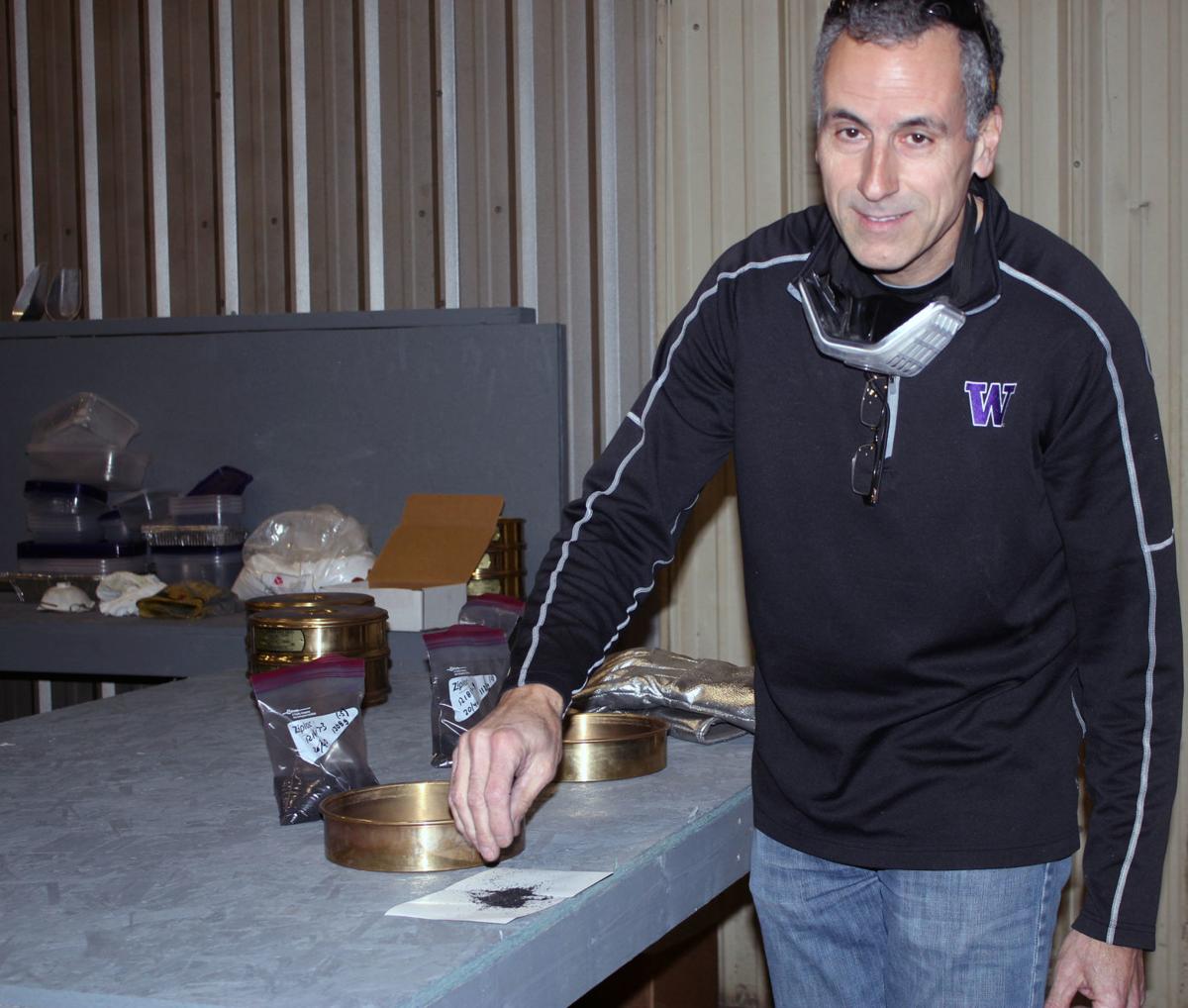 Premier Industries Engineer Dan Tabish shows what the proppant looks like once he has processed it. The Butte pilot project got off the ground in mid-December of last year.

Testing Anaconda’s slag to see if it can be turned from a waste product into a gold mine for the oil industry — and for southwest Montana — is underway in Butte.

Premier Industries plans to build a slag processing plant off Mill Creek Road in Anaconda this year. The company set up the pilot project in Butte late last year.

The founder of the process and the project, Rick Tabish, says the Anaconda plant will turn the smelting waste into proppant, a tool for the fracking industry, and pig iron.

That could mean a boon for Anaconda, which has 26 million cubic yards of slag — or 130 acres of it — sitting along Highway 1 on the way into downtown. The former Washoe Smelter created the waste pile for around 80 years smelting Butte's raw copper ore. The Washoe Smelter shut down in 1980.

In the fracking industry, workers shoot proppant down into a fissure. The material holds the rock open a quarter of an inch so oil and natural gas can be brought up to the surface.

Dan Tabish is the cousin of Rick Tabish, who originally said he was the founder of Premier. Rick Tabish now says he's a general contractor and general consultant to Premier.

The small-scale Butte project employs three people, including Dan Tabish, instead of the projected 10 that The Montana Standard reported last November.

Dan Tabish said he doesn’t anticipate adding more to the Butte project’s payroll but added that if there’s “a whole bunch more testing,” he might add more. There is the possibility of adding more testing personnel, he said. But that would be a couple of people.

The Anaconda operation, once it’s built, is expected to create jobs. Rick Tabish told The Standard Wednesday that number may be as many as 700. That includes everyone from security guards to salespeople, Rick Tabish said.

In addition to "perfecting the process" to create the proppant at the Butte pilot project, Dan Tabish is also extracting pig iron from the slag.

Stacy Vermecke, general manager for Association for Iron & Steel Technology in Warrendale, Pennsylvania, said via email that there is a good market for “merchant pig iron.”

Pig iron is used in the steel industry.

To make it, Tabish pours in the slag “and a few other things go in with it,” into a crucible with a hole in the bottom of it. The whole thing is heated up and when the slag becomes a molten liquid, it is released into a large machine called the atomizer, which spins the material at a high rate of speed.

What comes out is pig iron and slag-based proppant.

The company’s plans to turn slag into proppant is not without its critics. Some say the slag-based proppant will be too expensive for use in an industry known to cut corners.

But that doesn’t deter Dan Tabish, who is “messing with temperature and recipe” to perfect the process.

Dan Tabish is a metallurgical engineer who used to run a heat-treating business in Spokane, Washington. He gave up his company, Inland NW Metallurgical, in 2015 after a 20-year run, to devote himself full-time to working with Anaconda’s slag.

Rick Tabish said that if Premier had to start from scratch to make the proppant, they probably wouldn’t survive.

"It won’t be a big portion of the (proppant) market, but I don’t have to capture the entire market,” Rick Tabish said. “The magic of this business model is it’s a byproduct.”

Dan Tabish said the proppant is being tested for compression and strength and sphericity.

In other words, to be successful, the slag-based proppant has to be strong and round.

The Butte pilot project is going through about 15 pounds of slag for each test. They have about one to four tests each day that they test the slag.

Rick Tabish gained notoriety in the 1990s when he was convicted, then acquitted, of murdering Las Vegas casino executive Ted Binion.

When The Standard asked Rick Tabish for a comment Wednesday on his past, he responded by saying “who cares?”

“It doesn’t affect any day-to-day operations. I don’t have one black mark in business,” he said.

Uptown Butte will soon have the sears and sizzles of a Mongolian Grill, where patrons pick out their own meats and vegetables and they’re cook…

A judge sentenced a man to seven years in prison Tuesday for assaulting Undersheriff George Skuletich in the Butte-Silver Bow Courthouse in 2016.

Premier Industries Engineer Dan Tabish (on the right) is looking through a window in the atomizer to watch the slag turn into proppant, a tool for the fracking industry. The Butte pilot project at J. K. Fabricators to "perfect the process" of turning Anaconda's waste material from smelting into useful products and a business is underway.

Premier Industries Engineer Dan Tabish shows what the proppant looks like once he has processed it. The Butte pilot project got off the ground in mid-December of last year.