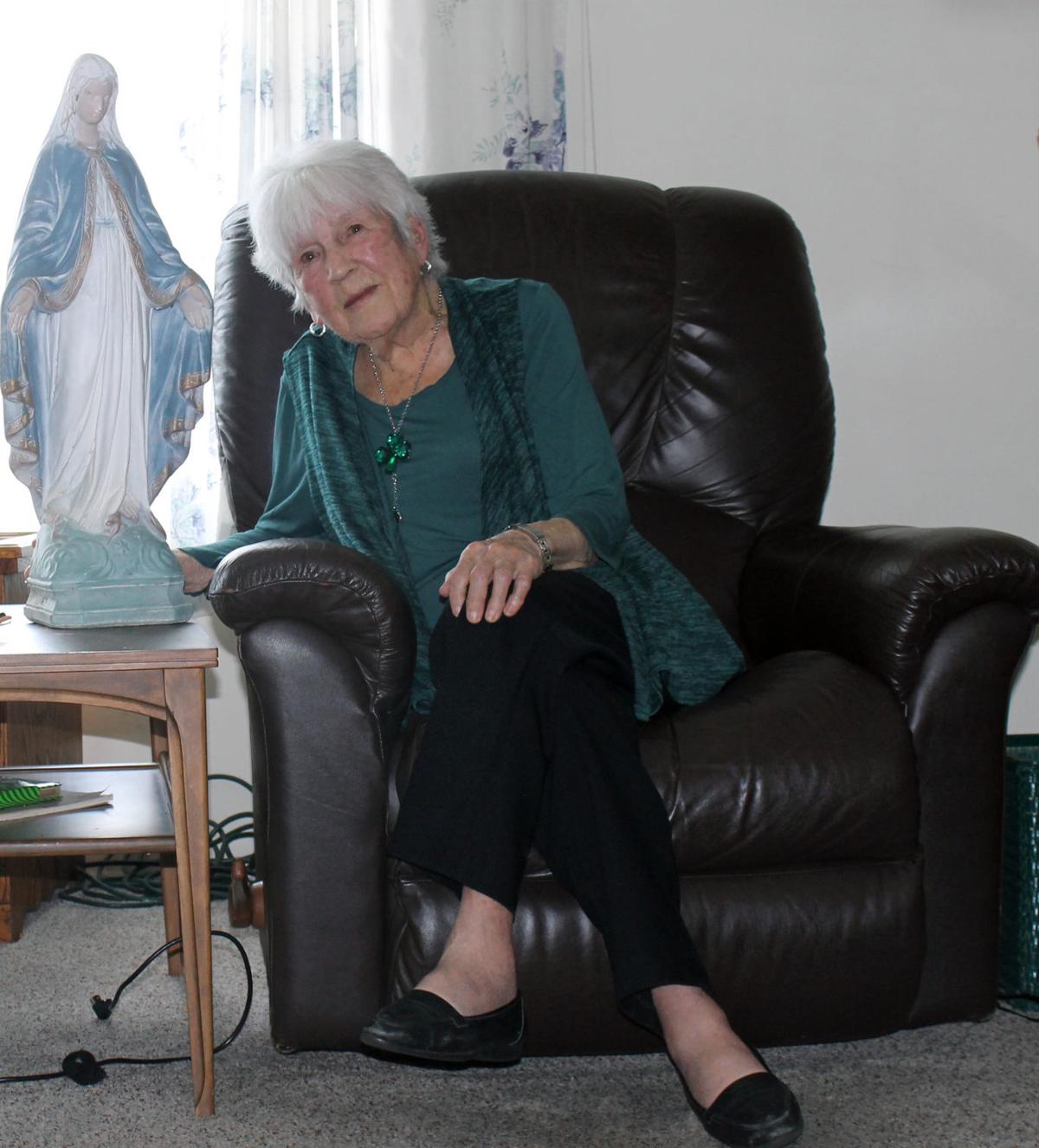 Enda Bowman, at 99, was thrilled to be named the Grand Marshal of the St. Patrick's Day Parade in Butte. 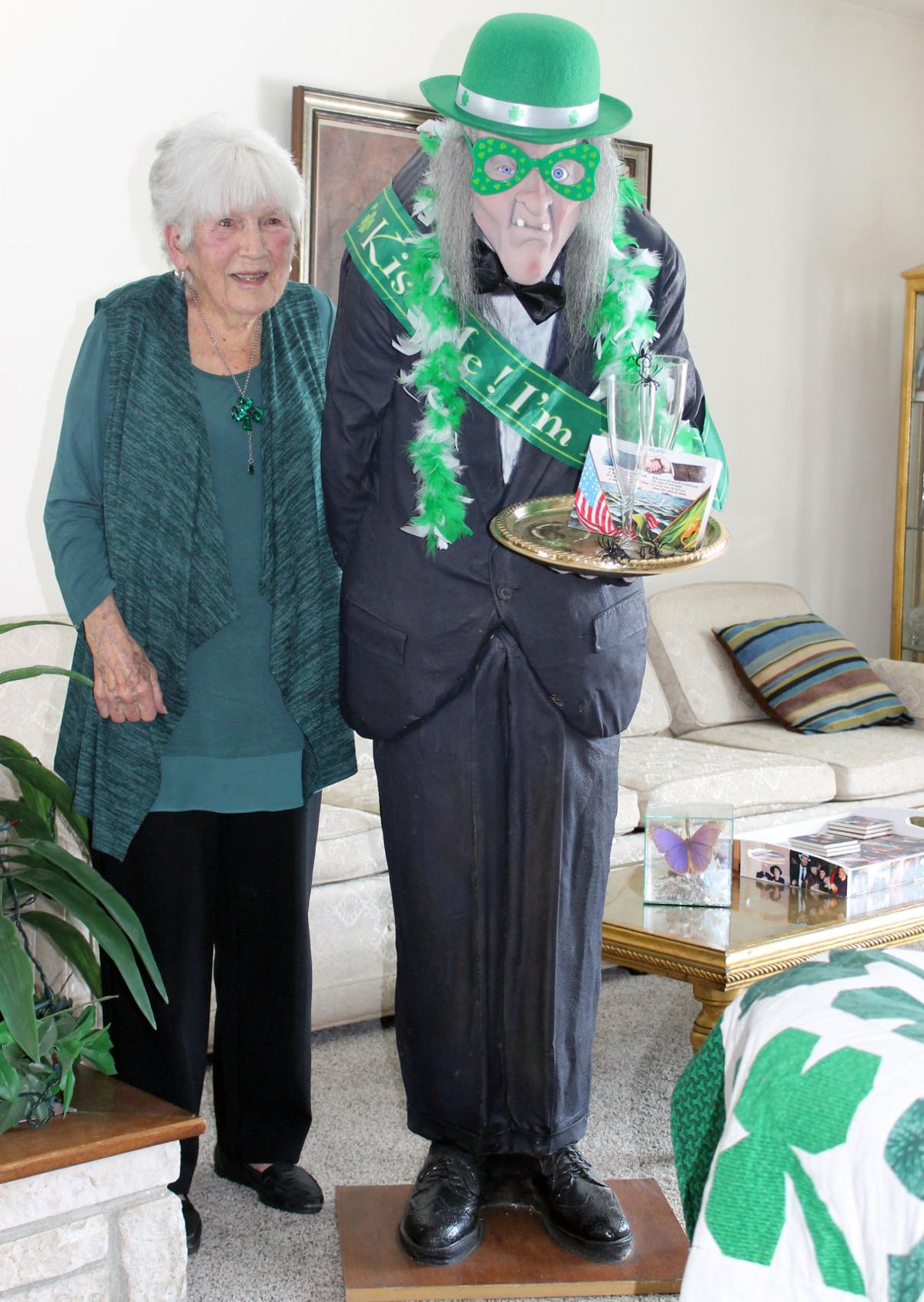 Enda Bowman's secret to a long life might be her Irish sense of humor. She posed earlier this week with "her friend," a statue that greets visitors when they first enter her home. She got the statue dressed up for St. Patrick's Day.

Enda Bowman, at 99, was thrilled to be named the Grand Marshal of the St. Patrick's Day Parade in Butte.

Enda Bowman's secret to a long life might be her Irish sense of humor. She posed earlier this week with "her friend," a statue that greets visitors when they first enter her home. She got the statue dressed up for St. Patrick's Day.

The secret to a long life for 99-year-old Enda Bowman may be her black Irish sense of humor.

Boyle said he was dumbfounded.

Bowman, who turns 99 Friday, is no wilting flower. When she was in her late 80s, she jumped off a cliff into the Blackfoot River. Just last year she dove into a very cold Georgetown Lake and was upset because she’d lost the ability to dive properly and belly flopped. She was 98 then.

One night when she was in middle age (she doesn’t remember the year), she put a ladder up against the Butte Country Club’s locked door to the swimming pool and climbed over.

The swim, she said, “was wonderful.”

Boyle said previously he picked Bowman because of her deep Irish roots, her deep Butte roots, and her commitment to all things Irish.

And true to those roots, Bowman still likes a drink. She has a nightly cocktail when she sits down to watch the evening news.

Her favorite adult beverage is a Manhattan. She makes them herself.

Bowman keeps up with what’s happening in the world. Her daughter, Debbie Shea, said her mother calls to talk about politics and that she has strong opinions.

Shea and her sister, Maureen Bowman, said that their mother’s ability to laugh at herself probably helps her longevity as well.

Bowman is old enough — she was born on March 16, 1919 — that she can remember when the radio was a newfangled piece of wondrous technology. Her father, Michael Healy, called his drinking establishment on North Main Street near Granite Street "the Radio Bar" because the radio was the newest thing going.

Bowman can remember when candy cost a dime — that’s because she stole a dime from her aunt to buy it when she was little.

But her potential life of crime stopped when she stole a pound of butter from a store as a child and kept her mother’s money. During confession, the priest at St. Mary’s Church told her to give the money to the store owner.

“That taught me a lesson,” she said.

She remembers when the street lights were called “arc lights” and workmen lowered them to relight them at night. She can explain how to pluck a turkey and get the fuzz off the bird because when she was a kid, the women in the house had to clean it in order for the family to eat it.

She remembers Irish wakes for the dead and Prohibition. During that era, from 1920 to 1933, her father operated a still on Roosevelt Avenue. When police caught him, he paid someone else to serve his jail time for him.

She remembers wrapping bandages for the wounded and writing to friends overseas serving during World War II.

She tells a story of a boss who, wanting to interrupt a longer-than-normal lunch, sent her a telegram to tell her to come back to work.

Born the year that Congress passed a law allowing women the right to vote, Bowman is old enough that she can remember when women still weren’t allowed to wear pants. She can recall that when she went back to work in the early 1970s, after raising five children, that she could wear pants to work but there were restrictions placed on what those pants looked like.

In fact, at 99 years young, Bowman can remember when St. Patrick’s Day wasn’t that big of a deal. She tells of a time when women weren’t allowed to participate in the parade.

This year, along with her five daughters, Bowman will be leading it.

The last time Bowman traveled to Ireland, she was 92 years old. Her parents emigrated from the County Cork in the early 1900s — and met in Butte.

She wrote letters to her Irish aunt. They’d been writing to each other for so many years, Bowman made the trip in 1972 to meet her father’s sister for the first time.

Bowman has Irish citizenship. If she lives to be 100 years old, she’ll be eligible to receive 100 pounds from the Irish government, Shea said. Bowman isn’t certain how she’ll get back to Ireland to collect. But she’s got a year to think about it.

Even Bowman’s name has a humorous twist to it. Her parents named her Patricia Catherine Healy, and that is the name on her birth record, Maureen Bowman said.

But when her parents took her to St. Mary’s to be baptized, the priest convinced them to change her name to Enda Catherine because there weren’t enough children named after St. Enda.

“She went in as Patricia Catherine and came out as Enda Catherine,” Shea said.

When The Montana Standard asked Bowman what her secret to a long life is, she stuck true to her Irish sense of humor.

Bowman will tell anybody who wants to hear it how she feels about her roots.