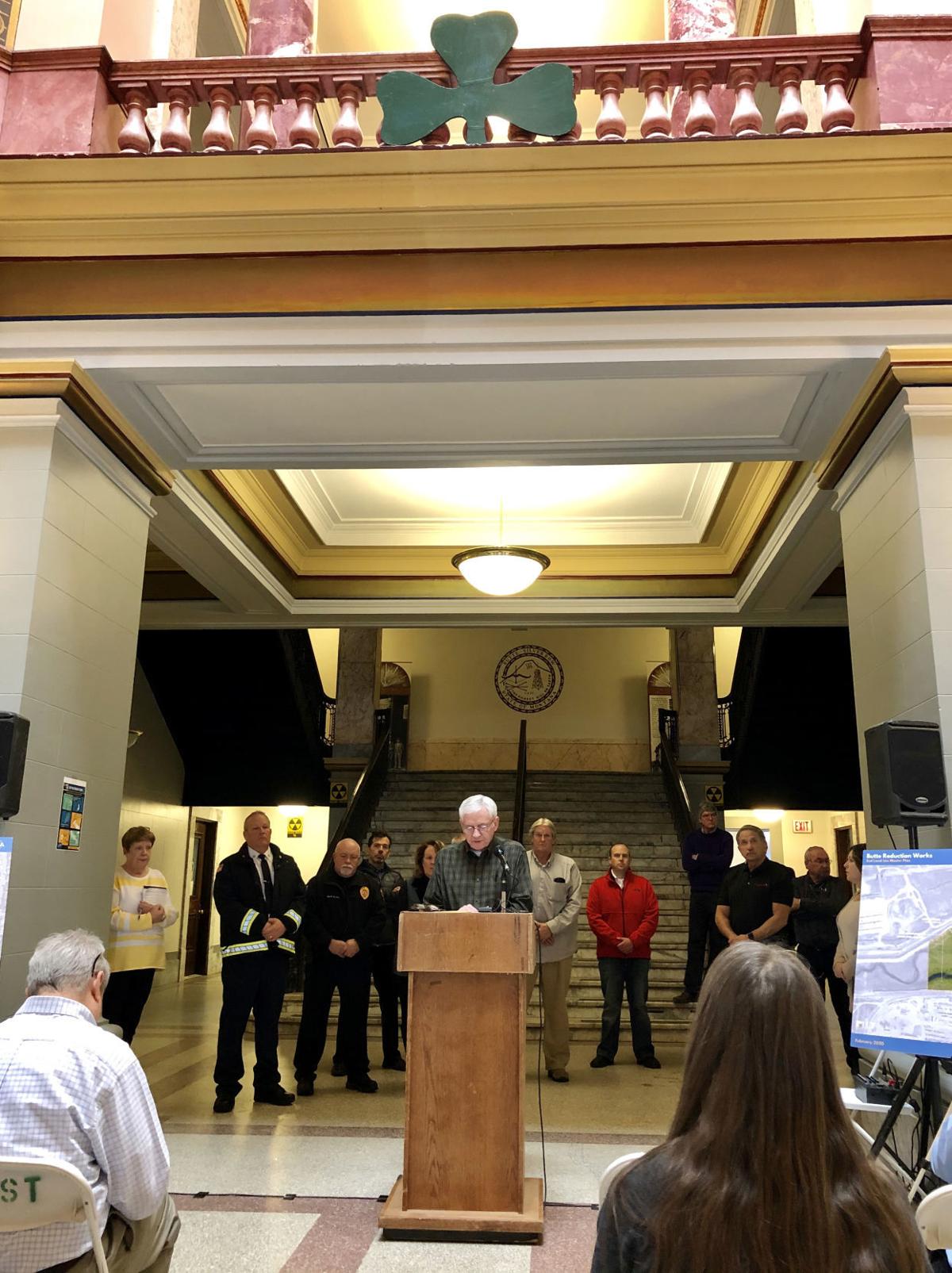 Under a St. Patrick's Day shamrock, Butte-Silver Bow Chief Executive Dave Palmer announces a COVID-19 state of emergency that means bars and restaurants will close for a week. 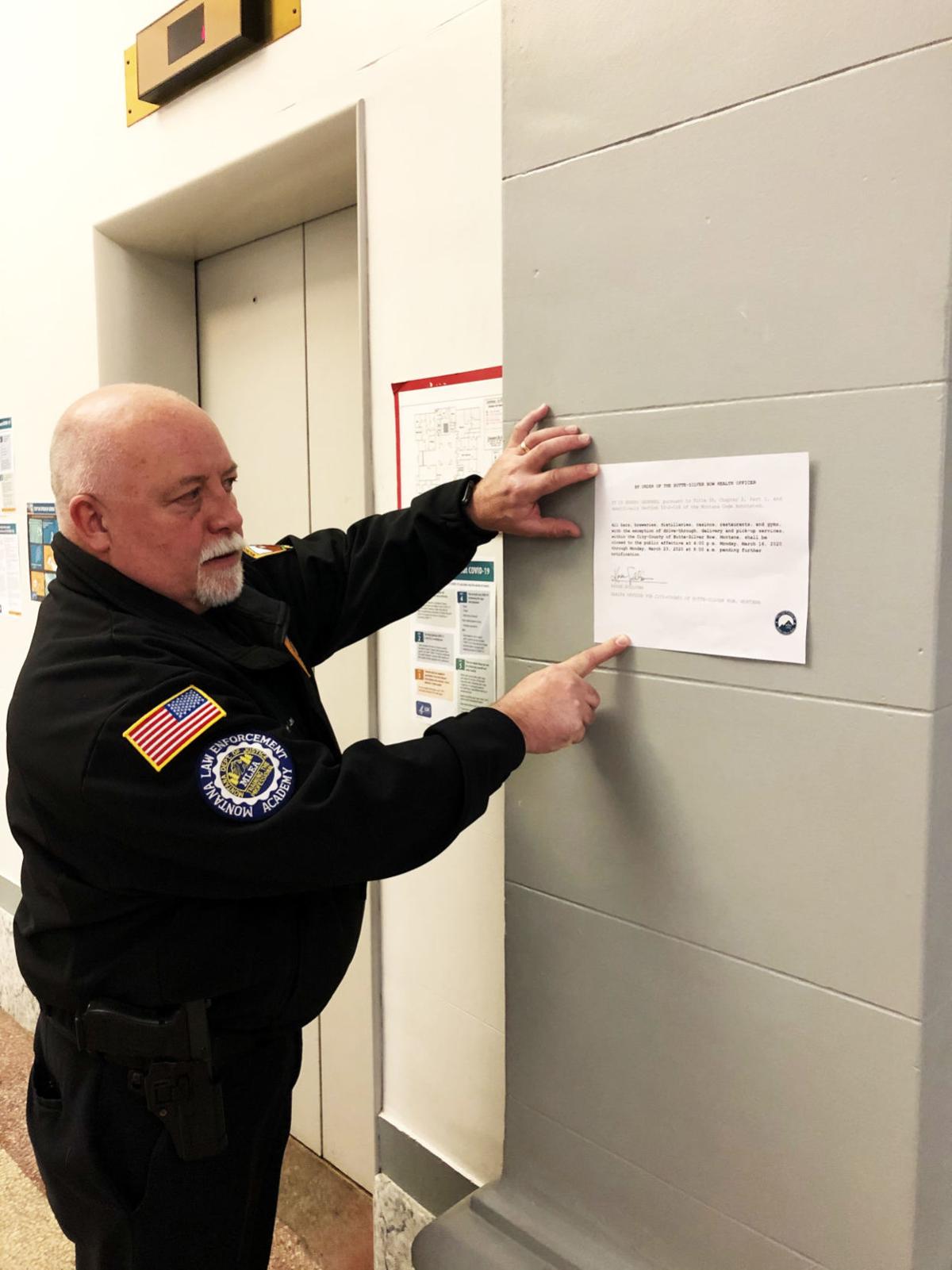 Ed Lester displays the official emergency closure notice that will be placed on bars and restaurants. 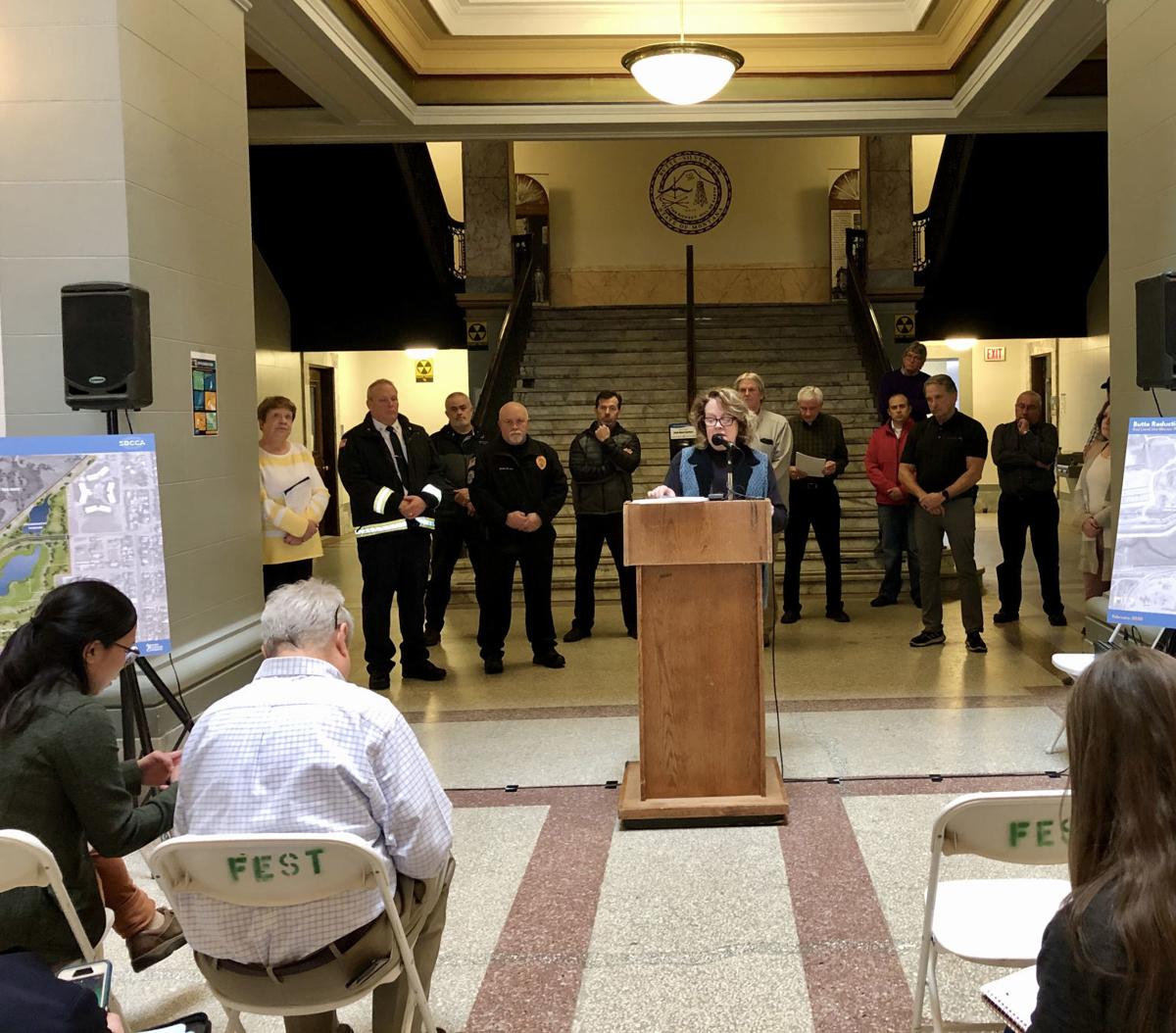 At a press conference in the Butte-Silver Bow Courthouse Monday, Health Officer Karen Sullivan explains that bars and restaurants will be closed for a week.

Butte-Silver Bow officials announced that bars, restaurants, casinos, breweries, distilleries and gyms within the county will be closed for a week beginning at 4 p.m. Monday and lasting until 8 a.m. March 23.

But exceptions were made for restaurant drive-thru, delivery and pickup services. Hotels will remain open, but if they have breakfast buffet areas, they will be closed. Grocery stores and convenience stores will remain open.

The closures, coming the day before St. Patrick's Day, will mean a major financial hit for most of the establishments. Even so, many, including the M&M, Headframe Spirits, the Knights of Columbus and the Party Palace, had already announced they were closing as a proactive measure.

The closures, to try to slow the spread of COVID-19, will be reassessed at the end of a week's time.

"The safety and the well-being of our citizens is the highest priority," Dave Palmer, Butte-Silver Bow's chief executive, said at a Monday afternoon news conference held in the courthouse rotunda.

The announcement came as President Trump issued new national guidelines urging that gatherings be limited to 10 people or less. The local closures are authorized under state law and were ordered by Karen Sullivan, Butte-Silver Bow’s health director, after the county’s board of health decided the step was needed.

Anyone needing to appear before judges in Justice Court or City Court is to call the court for instructions first and an April 1 public hearing to discuss the Superfund consent decree is being postponed. Other Superfund meetings also are on hold.

Everett said the county board of health made the decision Monday. "It's regrettable, but we have to do it," he said.

Sullivan said she and the board of health met at noon Monday and decided the closures were needed to try to curb the spread of COVID-19 here. State law authorizes local health officials to make such decisions in emergency situations.

State officials announced Friday that a Butte-Silver Bow man in his 50s was among four people who initially tested positive for the virus. Sullivan said Monday afternoon that it remained the lone positive test in the county, but more cases are expected in the U.S., Montana and Butte-Silver Bow.

Palmer said the other restrictions and steps involving county government were made following “continuous discussions” he and other county officials had over the weekend.

Although the public hearing on the consent decree is postponed for now, and “non-essential” meetings will be put off, the Council of Commissioners will still meet as scheduled Wednesday night, he said. That’s because council action is needed on some measures, including budget authorizations.

He did encourage citizens to watch the proceedings via livestream and pay water bills or vehicle fees by mail or online, but said the courthouse would remain open, for now at least.

“We are still planning on everyone coming to work but we are trying to limit contact with the public as much as possible,” he said. “It will be a day-to-day decision on how far we go. If the virus spreads, we may have to take other steps.”

For the time being, Palmer said, penalties for late payment of water bills will be waived and there will be a grace period before any shutoffs are made.

The county is taking up to $127,000 from reserves on an emergency basis to help with expenses in responding to the situation, money it hopes to get back through federal aid.

Sullivan said she had talked with health officials in other counties with sizable cities and expected some of them to take similar steps with regard to their restaurants. Lewis and Clark County announced similar closings effective Tuesday morning.

In response to a reporter’s question, she said she had not had discussions with retail grocery stores about trying to meet demand for goods because that was a national issue beyond the reach of local health officials. Palmer said his office would try to reach out to suppliers in hopes they could meet those needs.

Palmer encouraged the community to come together and look out for one another and then parted with a bit of optimism.

“We will work through this and by working together, we will come out on top, I’m sure,” he said.

The identity of the man killed in the May 28 fatal crash near the top of Harding Way has been released.

Butte-Silver Bow County Coroner Lori Durkin has released the name of the woman who died April 26 after being tased by police.

Under a St. Patrick's Day shamrock, Butte-Silver Bow Chief Executive Dave Palmer announces a COVID-19 state of emergency that means bars and restaurants will close for a week.

Ed Lester displays the official emergency closure notice that will be placed on bars and restaurants.

At a press conference in the Butte-Silver Bow Courthouse Monday, Health Officer Karen Sullivan explains that bars and restaurants will be closed for a week.