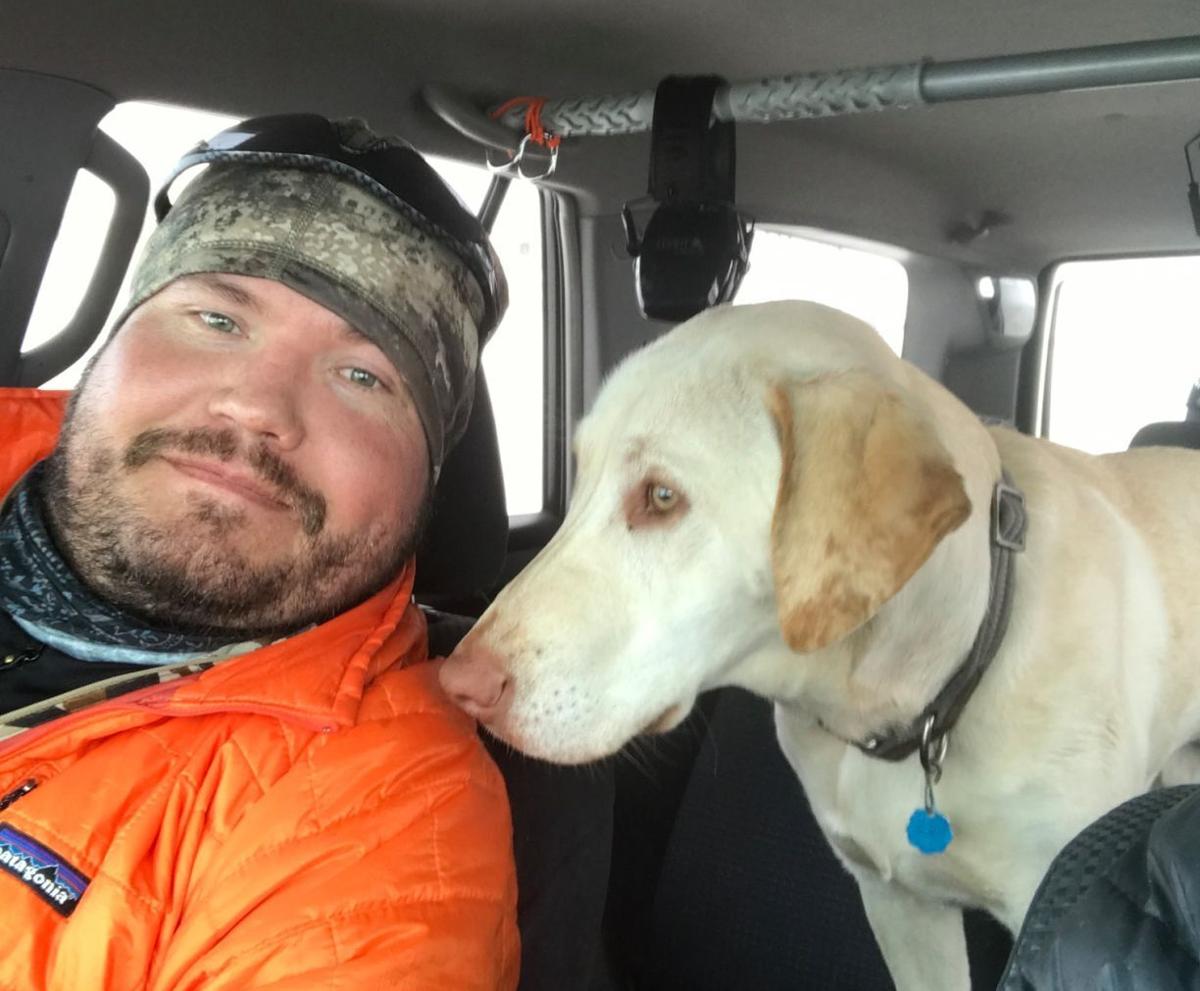 One of the core rescuers, Jim Rule, pictured Friday morning with Brody, a puppy stranded in the hills above Homestake Pass for eight days. Brody was finally rescued after being caught in a live trap. 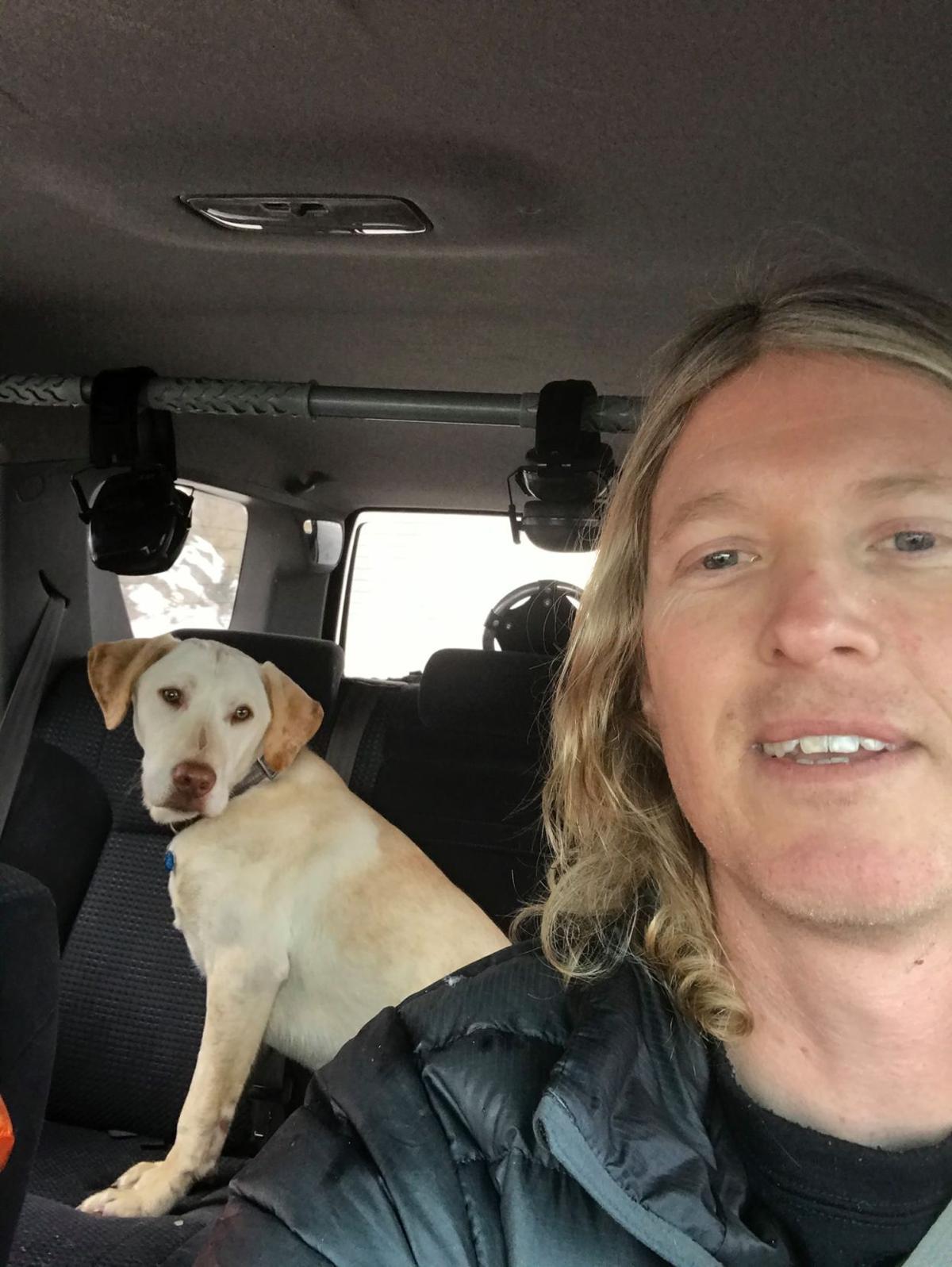 On Friday morning, Kelly Parks, one of the core rescuers, sent this picture of Brody, a puppy stranded in the hills above Homestake Pass for eight days. Brody was finally rescued.

In the minds of his owners, rescuers and hopeful supporters in Butte, Brody's story could only end one way.

The seven-month-old pup was finally caught after three full days and nights searching and five more days trying to coax Brody into a live trap.

Brody took the bait — rotisserie chicken — Friday morning, and worn out but relieved rescuers took the dog to the vet.

According to Tanya Craig, the daughter of the dog’s owners, Brody was licking his rescuers on his car ride to the vet, and despite spending eight days in the cold mountains outside Butte, seemed to be healthy and in good spirits.

On the morning of Feb. 11, Wade and Colleen Pinson were traveling over Homestake Pass on I-90 when their truck was hit by a jack-knifed semi-truck. The couple from Washington survived the impact without life-threatening injuries, and Brody jumped out of the damaged vehicle’s window.

Scared to death, Brody took off into the unknown wilds on one of the coldest weekends of the year. With fractured ribs, Wade followed Brody’s tracks for a mile.

Wade was the first to search, but wouldn’t be the last.

He was taken to the emergency room at St. James Healthcare, and he and Colleen eventually had to return to Washington to see a physician for their injuries, with Brody still at large.

In the meantime, Craig took to Butte Facebook pages like Butte 411, and posted the Find Brody page. The response was overwhelming.

Craig received hundreds of comments on her updates, and volunteer groups set out on snowmobiles, snowshoes, and side-by-sides, using dog teams day and night though rough mountain terrain in temperatures well below zero.

For three days they searched for Brody — Butte citizens on their own time and dime, out of love for their fellows and their lost dog.

“In today's day and age, you start losing faith in humanity sometimes. These people — I can't even explain how amazing they've been — complete strangers just reaching out to my parents while they were there and doing everything they could. And reaching out to me in droves asking what they can do. It's an amazing, amazing community, and I don't even know them,” Craig said.

Finally on Sunday morning, Craig received a text from one of the hardcore searchers, Chance Altman.

It was a picture of Brody’s fresh tracks. Within 10 minutes, Altman sent Craig another picture — and there was Brody in the distance.

Amy Addy, with The Retrievers, a Minnesota-based organization dedicated to recovering lost dogs, became aware of Brody on the internet and managed to get in touch with the owners and rescuers. She specializes in bringing stories like Brody’s to a happy end, and offered to guide the capture.

As a result, the big-hearted crowds were asked to disperse, leaving a few rescuers including Altman, Jim Rule, Kelly Parks and Ty Tietz taking shifts to try everything they could to lure Brody in.

For five more days, rescuers attempted to use food in a live trap and even the scent of the Pinson couple’s unwashed clothes to bring Brody to safety, but to no avail.

Butte held its breath through the whole thing, and the worry didn’t stop there. Even folks from outside the area began commenting on the Facebook page.

“Did they catch him?” everyone wanted to know.

Friday morning they got their answer.

Parks and Rule sent photos of the famous lab-mix puppy siting in the backseat of a car, and an entire community let out a huge sigh of relief.

For Craig, it was more than a sigh.

“At first it was all tears,” Craig said. “Everybody including our case manager, all of us from the team, have been in tears.”

For the Pinsons, who had been glued to the Facebook screen and were still nursing injuries from the crash, it was something else altogether.

“I don’t know if there’s a word that would explain how excited they are. My mom kept asking me to repeat myself because she just couldn’t believe what she was hearing,” Craig said.

Colleen may have been in disbelief, but she never gave up hope. The Pinsons were already on the way back to Butte from Washington Friday morning before Brody was found.

Likewise, there is no way to say enough to the core group of rescuers, Addy, the 50 or so community members who actively searched for Brody, and the hundreds and hundreds more who supported the Pinsons and Brody with their good will and prayers.

“I can't explain how overjoyed and thankful we are to everybody,” Craig said. “I think most of the people there were just as emotionally invested as we are.”

The Pinsons reunite with Brody on Saturday morning, bringing this wild, heart-wrenching saga to a heartwarming end.

Deal reached to get Calif. kids back in classrooms

One of the core rescuers, Jim Rule, pictured Friday morning with Brody, a puppy stranded in the hills above Homestake Pass for eight days. Brody was finally rescued after being caught in a live trap.

On Friday morning, Kelly Parks, one of the core rescuers, sent this picture of Brody, a puppy stranded in the hills above Homestake Pass for eight days. Brody was finally rescued.