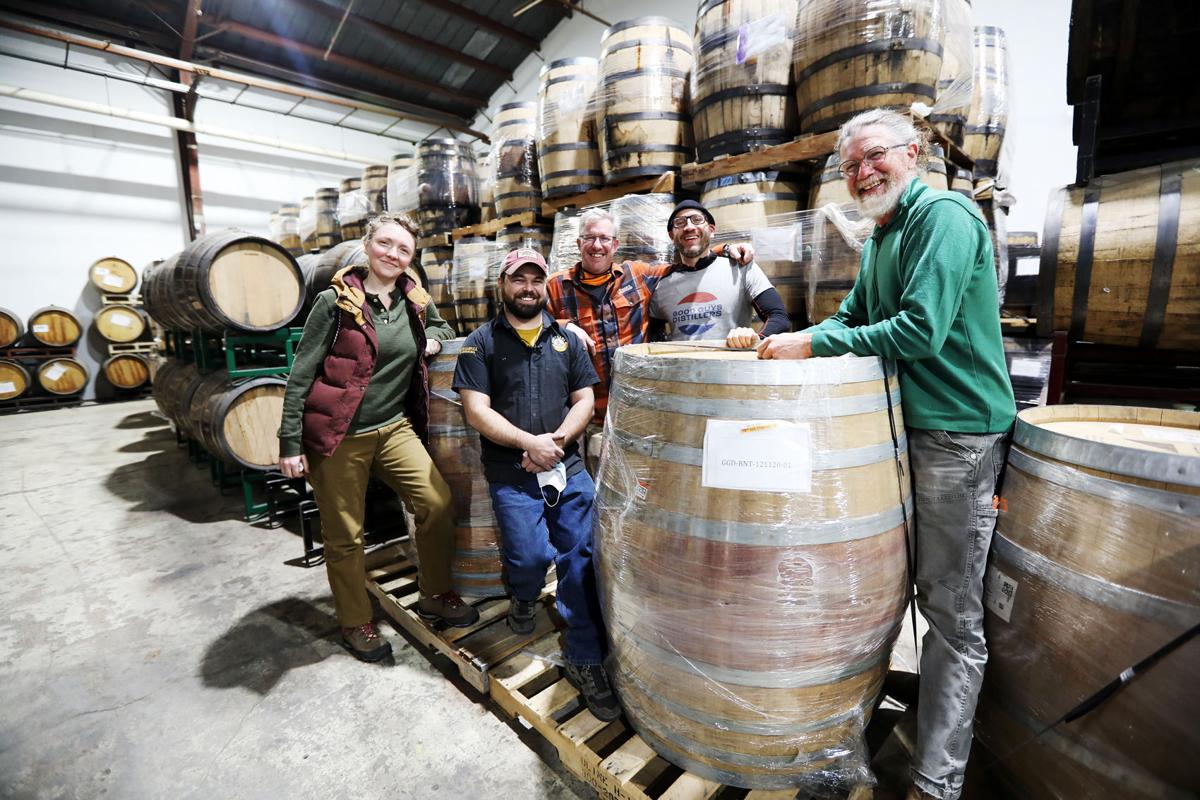 A meeting of the minds with whiskey distillers form across America, from left, Amanda Christensen of Artisan Spirit Magazine, Reade Huddleston and John McKee of Headframe Spirits, Johnny Jeffery of Bently Heritage Distillery and Randy Hudson of Triple Eight Distillery, gather at the Butte distillery for a new project. 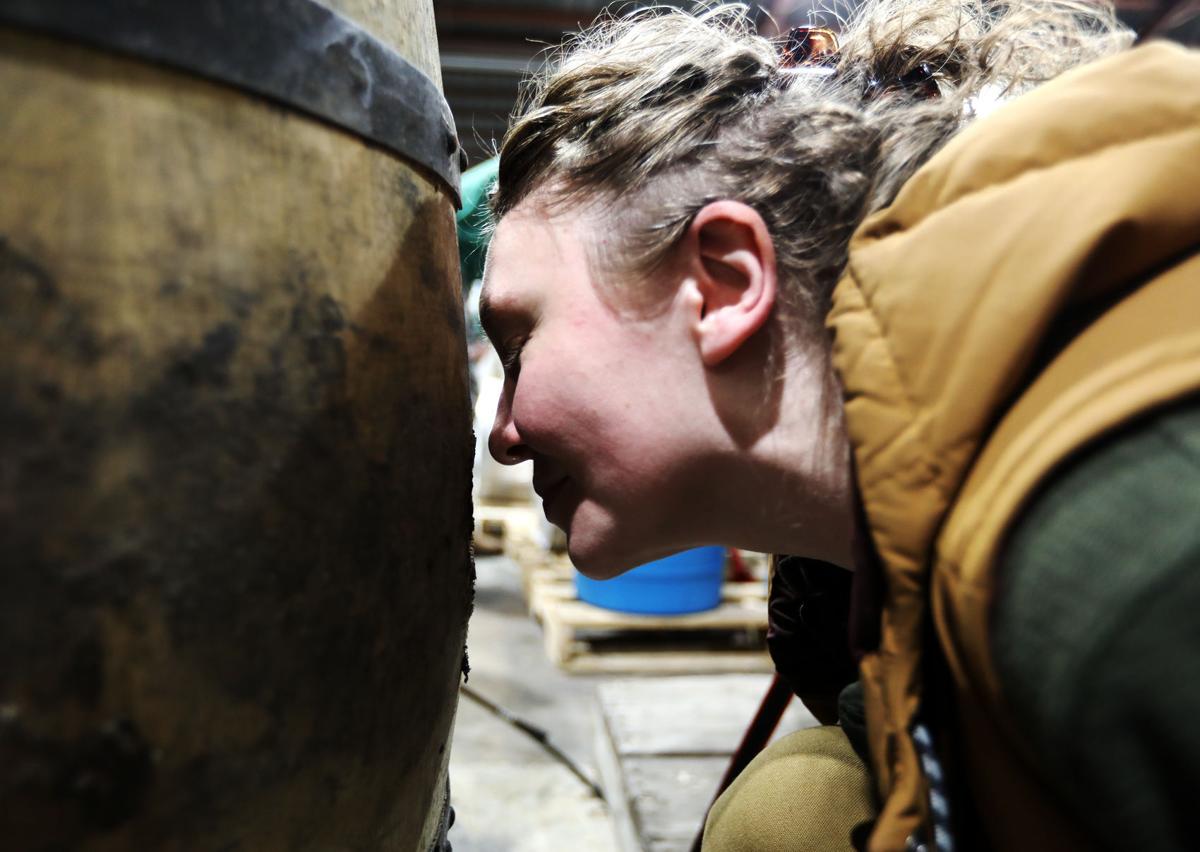 Amanda Christensen of Artisan Spirit Magazine smells the cask brought from a distillery in Nevada that will hold a new blend of whiskey made from distillers across America, including Butte's local distillery Headframe Spirits. 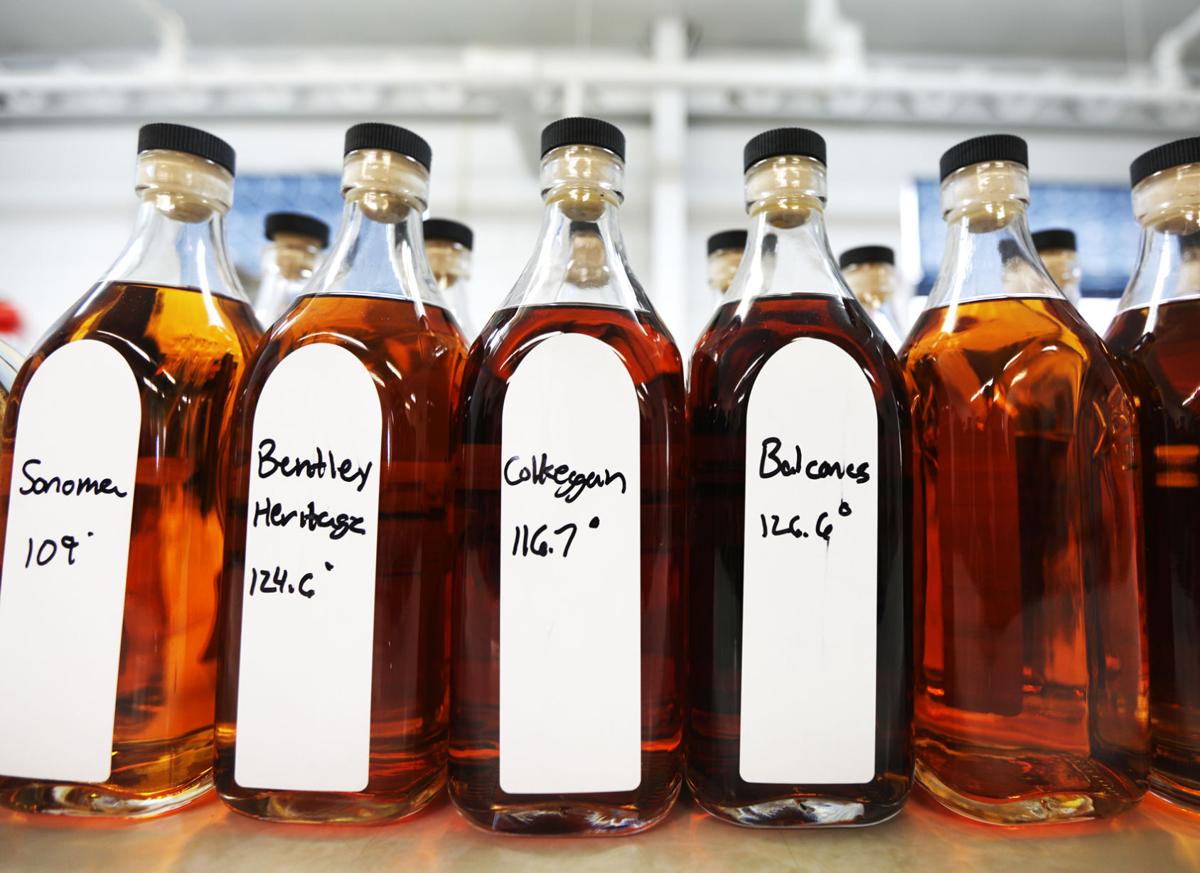 Whiskey from distilleries across America. 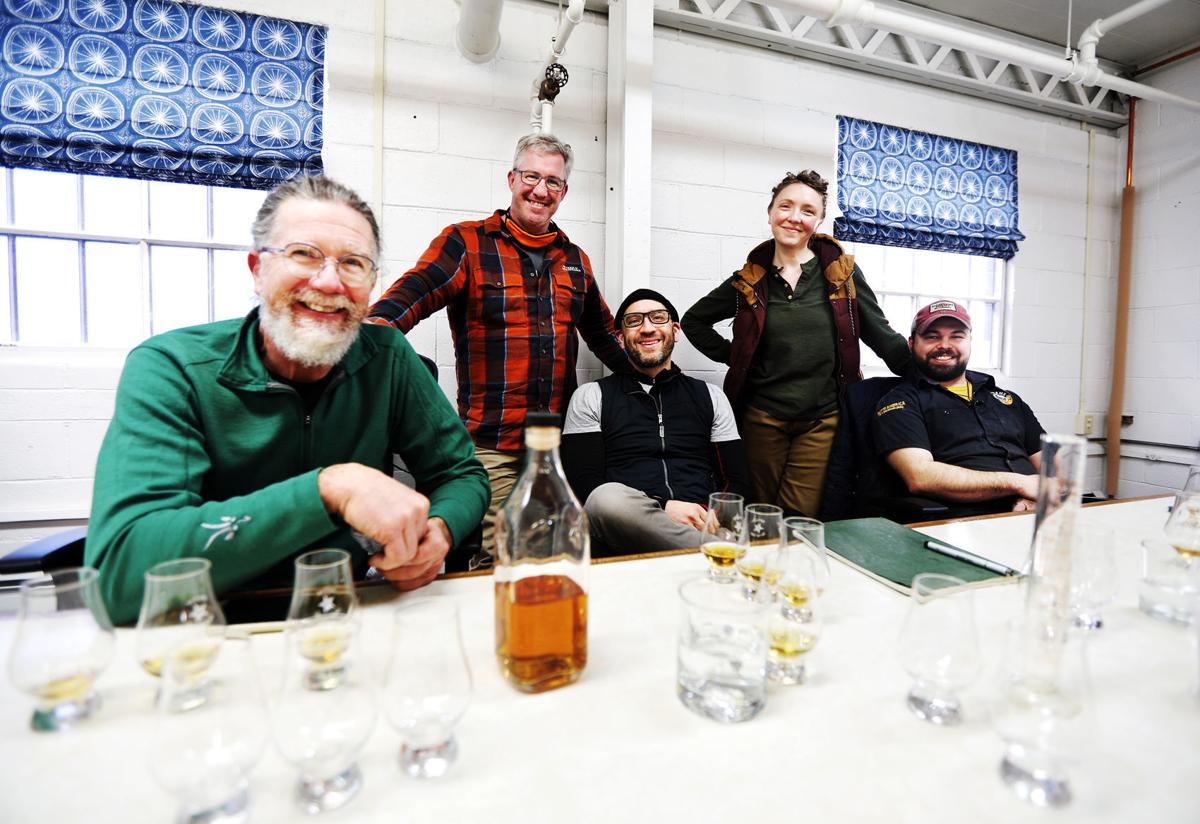 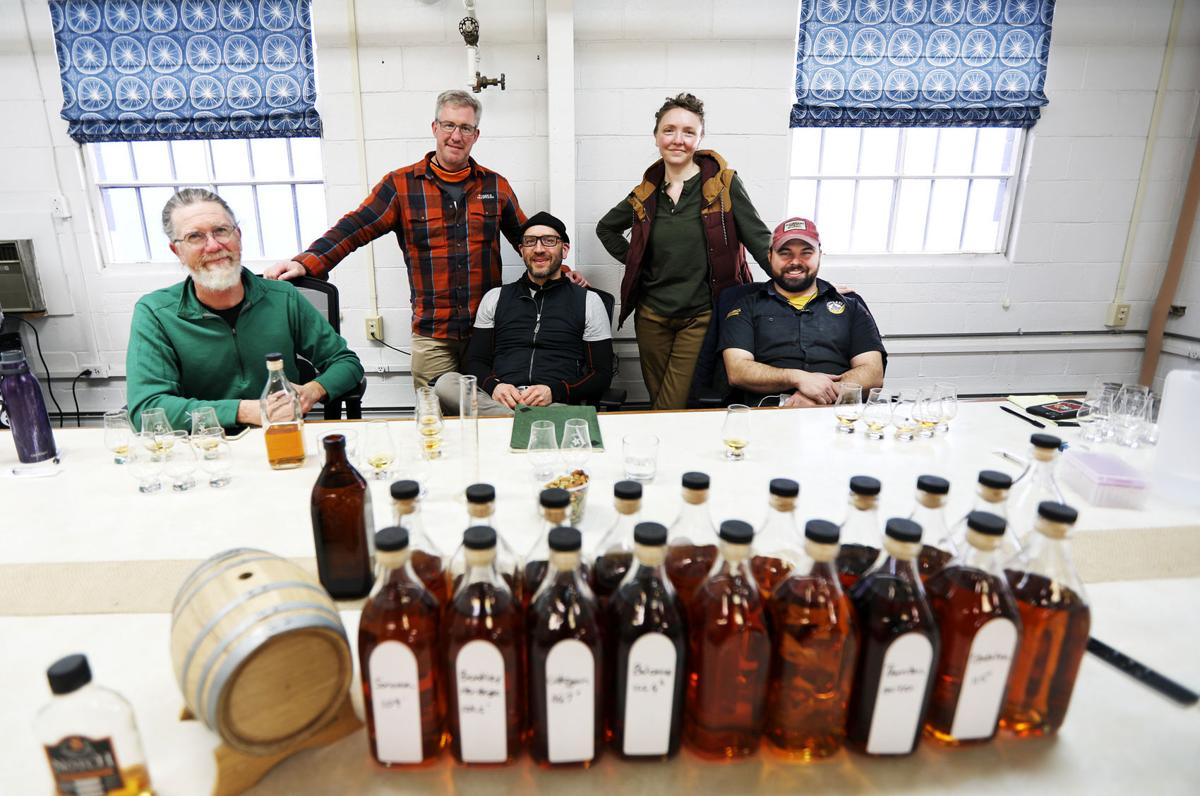 It is a thousand bottles of giving back.

Really, you could say a thousand bottles of love are being produced in Butte.

Seven years ago, a couple of craft distillers decided their industry needed a group of professionals who were willing to share their knowledge and support the industry, as a whole and specifically when someone in the industry needed help. It would be a place of learning, a place of vulnerability. But it would also be a common foundation of trusted sources around the subject of making damn good booze.

So more or less on the spot they created Good Guy Distillers. The group now has more than 100 members, distillers from all over the world. They insist on one thing: To be a member, you have to actively contribute, to give back to the industry. Every year, they cull the group of those who join but don’t contribute.

They are in the process of creating something called a “vatted malt,” a blended malt whiskey made from multiple whiskeys from multiple distilleries around the country, with the goal of sponsoring increased diversity in an industry currently dominated by “old white guys,” as McKee says.

Here’s how it works: The whiskey they make will fill a thousand bottles. Each will sell for $50. That $50,000 will be seed money for STEP-UP, an American Craft Spirits Association diversity foundation. STEP-UP’s goal is to train two people a year in starting a distillery, thus diversifying the industry in terms of “races, genders, disabilities and sexual orientations,” according to the ACSA. The internships will include all aspects of the industry.

For the project, 10 single-malt whiskeys were donated by distillers from around the country, and at Headframe’s Kelley facility this week, master distillers and whiskey-filled oak casks gathered like the ravens who roost there each evening in the winter.

Whiskey was drawn from each cask and tasted individually. McKee, too, participated in the initial tasting, but deferred to Huddleston to “do the heavy lifting,” he said.

Together, with no preconceived idea about what the final product would be, the distillers began exploring how the flavors combined, what each gave to the blend.

They began bouncing assessments off of each other, then began to “cherry-pick” the blend, Hudson said, deciding “what might be too heavy, what might be lacking.”

Finally, a “recipe” was agreed upon — how much of each whiskey would be used in the blend — and the work moved into the warehouse, where the barrels waited. Soon, they were tapped in turn, and the aromatic amber fluid began filling a huge container.

Hudson had shipped a barrel of The Notch — no small donation when you think that, while some of the Notch is sold at 12 years old, by the time it is 15 years in the barrel, the whiskey sells for $500 a bottle, and the donated barrel contained enough for 250 bottles.

Only problem was, the Notch barrel didn’t arrive at the Kelley along with all the other donated whiskey. Hudson was on edge, to say the least. Finally, the shipper located the barrel — in Butte — and it was available for the blend.

For Jeffery, the barrel he donated will mark Bently Heritage’s whiskey debut. The distillery in Nevada’s high desert, which grows its own grain and mills it on site, put the whiskey back last year and won’t sell any until 2024 at the earliest. But it will be a part of the blend.

Also in the blend is Headframe’s Kelley malt. The Irish-style malt, aged eight years, made its debut last year to rave reviews.

The whiskey will be marketed as “Good Guy Distillers Lot No. 1.”

McKee says the distillers have donated far more whiskey than is needed for Lot No. 1, so it will be barreled and released in subsequent lots. Each lot will have a different blend and therefore a different taste and character. “We have enough for three lots, so that will mean $150,000” for STEP-UP, he said.

McKee added, "The blending is being done by three 'old white guys,' and we see that irony. But we all run our own distilleries that actively encourage diversity, and we hope that our efforts allow for graduates of the inaugural STEP UP to participate in the next blend in 2022."

After the blend for Lot No. 1 is completed, the whiskey will be returned to barrels while other work around its release — label-making, marketing, etc. — is done. That process will probably take about four months, meaning the whiskey could be released this summer.

For this period, Jeffery said, they will use not the Spanish wine barrels often used by whiskey distillers, but rather barrels that previously contained bourbon.

“That’s what you use when you don’t want the wood affecting the flavor,” he said. “The bourbon already took the flavor from the wood, so the wood won’t interfere with the barrel chemistry we want.”

Then the whiskey will be disgorged, diluted, and bottled.

A message in a thousand bottles.

Malt whiskey from the following distilleries is being blended into one:

Psaki on gasoline shortage: 'The end is in sight'

Psaki on gasoline shortage: 'The end is in sight'

Sights set on rebuilding M&M: 'It's going to take a series of small miracles'

There’s nothing left but piles of bricks and charred rubble where the M&M Cigar Store served as an anchor icon to Uptown Butte for 130 years.

“There is no way to be a perfect mother … but a million ways to be a good one.”

Despite lingering pandemic uncertainties and another year without the two biggest festivals in Butte, the summer is shaping up nicely for thos…

Vaccine sweepstakes in Butte could pay out $35,000 weekly; sheriff, others cut radio spots

Bomb threat shuts down banquet in Dillon for trappers association

A meeting of the minds with whiskey distillers form across America, from left, Amanda Christensen of Artisan Spirit Magazine, Reade Huddleston and John McKee of Headframe Spirits, Johnny Jeffery of Bently Heritage Distillery and Randy Hudson of Triple Eight Distillery, gather at the Butte distillery for a new project.

Amanda Christensen of Artisan Spirit Magazine smells the cask brought from a distillery in Nevada that will hold a new blend of whiskey made from distillers across America, including Butte's local distillery Headframe Spirits.

Whiskey from distilleries across America.