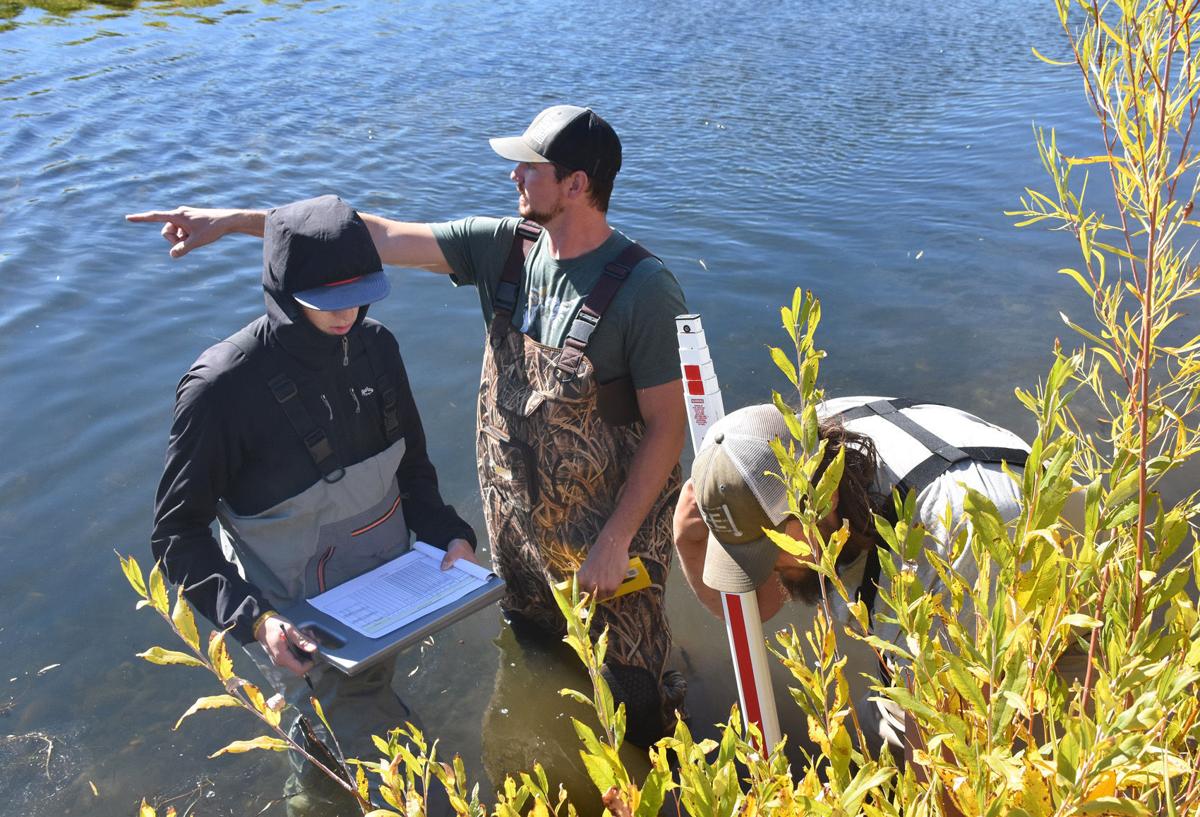 Stratton Bohl, left, Colton McCall and Connahr Lalley take measurements this summer along the upper Clark Fork River to determine streambank resistance to erosion. The University Of Montana Western students are among a host of students, professors, scientists and others sharing details about their research on the Clark Fork. 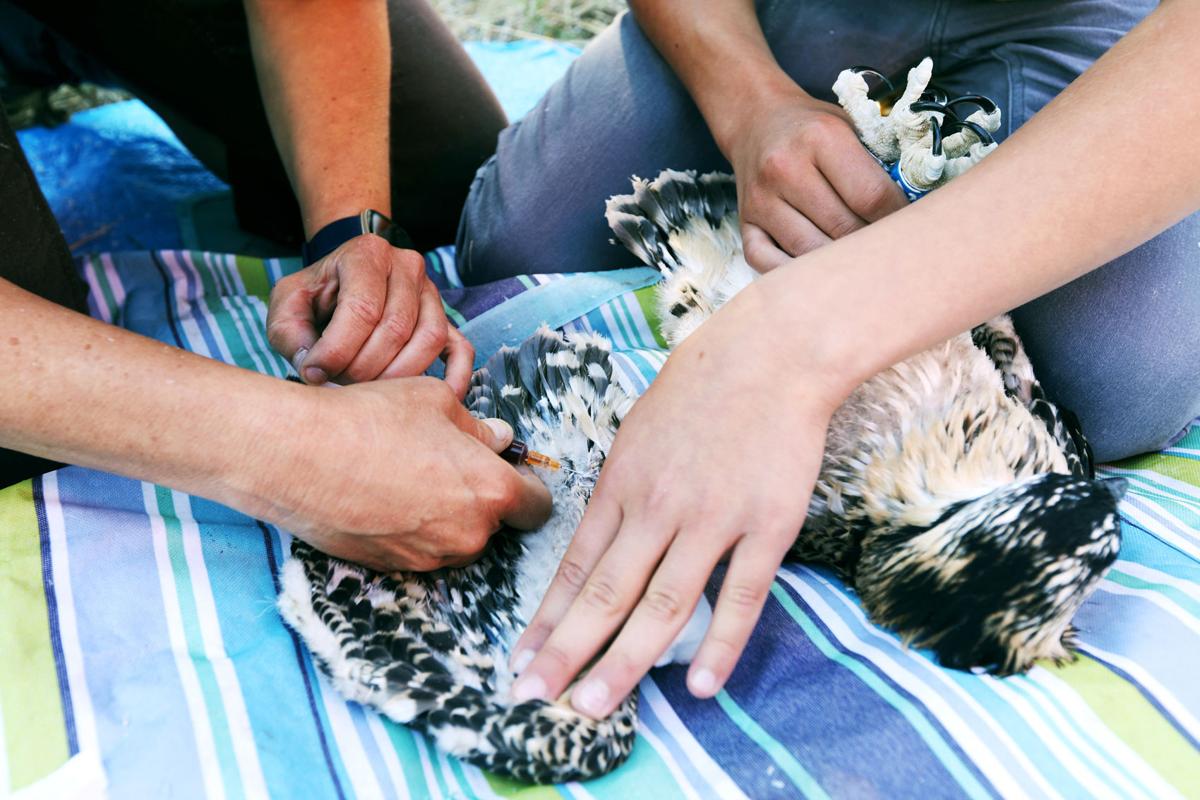 Members of the Montana Osprey Project draw a blood sample from one of the three chicks living in the nest at Warm Springs Ponds. Blood and feather samples help researchers with the ecotoxicology work being done in conjunction with the EPA Superfund cleanup of the area. Ospreys are the top species in the aquatic food chain and analysis of their blood and feathers helps determine the health of an aquatic system.

The cataclysmic flood of 1908 washed massive quantities of contaminated mining and smelting wastes into the Clark Fork River, leaving its banks, floodplains, flora and fauna as battered as a nursery rhyme egg.

Today, a remarkable collaborative effort among researchers, professors, students, consultants and agencies working in the upper Clark Fork suggests that the fractured waterway might someday fit back together again – albeit with a few lingering cracks.

On long summer days, along a stretch of river between Deer Lodge and the Warm Springs Ponds, scientists can be as ubiquitous as dabbling ducks.

Round one river bend and a beaver slaps its tail; round another and a great blue heron takes flight; round a third and there stands a systems ecologist with a clipboard.

One recent September morning students from Western waded through a portion of the river below the Warm Springs Ponds. They were calculating a Bank Erosion Hazard Index, a measure of a streambank’s resistance to erosion.

They were students of Rob Thomas, a professor of environmental sciences who is enthusiastic about the research underway in the upper Clark Fork and related cooperation among scientists, educators and students.

“I think the collaborative effort is wonderful and I am very appreciative,” Thomas said.

There are rich before-and-after research opportunities as the Montana Department of Environmental Quality completes remediation of one river stretch and begins to tackle another: What has worked? What hasn’t?

Research by Megan Fylling, an avian ecologist, has focused on the response of birds to remediation.

“The initial results I’m finding is that shortly after remediation we see a decrease in the number and diversity of bird species at sites,” she said, a response attributable to removal of riparian vegetation.

“At sites where remediation is getting more established, five years out, we see an increase and return of riparian bird species,” Fylling said.  “The next step is to not only document the presence and absence of species, but to compare reproductive success in species in pre/post remediation sites.”

To wit, another question for researchers is whether birds are raising more young in the vicinity of remediated sites. Birds that are “riparian specialists” frequently eat the same bugs consumed by trout, making the birds vulnerable to the same effects of mining/smelting contamination.

Arica Crootof, an assistant professor of environmental sustainability at the University of Montana Western, said she has encountered researchers in the upper river working across disciplines to share expertise. There is positive collaboration too, she said, with non-profits like the Clark Fork Coalition and with ARCO, the company deemed responsible for paying for the cleanup because of corporate ties to the original polluter.

“Everyone’s interest in working together will likely greatly benefit the river system and the people who live and visit this watershed,” Crootof said.

“We need good science; we need passionate people; we need to connect the science with the public and we need an evolving process,” she said. “This is all happening in the upper Clark Fork River system and I am excited to be part of it and to share this research experience with students.”

Two years ago, over pints at a Helena micro-brewery, a core group of people representing the Montana University System and state agencies – including the Natural Resource Damage Program and Montana Fish, Wildlife and Parks – organized the Upper Clark Fork Working Group, or Working Group.

Fylling is both a participant in the Working Group and a fan of its mission.

“The UCFWG brings together people from many disciplines,” she said. “Since everything is connected, the research modalities should therefore also be connected. Ultimately, our understanding of the complexity of the river can help guide future remediation efforts.”

And remediation efforts along the river will continue for years. The Montana Department of Environmental Quality is the lead agency responsible for making the cleanup happen.

In 1977, Atlantic Richfield Co. acquired the Anaconda Co. Three years later, Congress passed the legislation creating the federal Superfund program. And ARCO became responsible for addressing the massive pollution left behind by the once-powerful company that mined and smelted ore.

The EPA’s Clark Fork River Operable Unit stretches from the river’s headwaters near Warm Springs to the former Milltown Reservoir east of Missoula. But the majority of the cleanup will occur from Warm Springs downstream to Garrison — a section of roughly 45 miles referred to as Reach A. Pollutants include heavy metals — cadmium, copper, zinc and lead — and arsenic.

Some observers have criticized certain aspects of the DEQ’s cleanup efforts to date. For example, they have said the wholesale removal of riparian vegetation is unnecessary and injurious to brown trout that need the shade to both cool the river in summer and provide cover.

DEQ has responded by saying the agency is doing what it can to retain streambank vegetation in places where doing so seems reasonable.

Thomas said students from UMW have participated in research projects on the river that have provided rich experiences.

One year, after a fish kill, students retrieved samples of macro-invertebrates (water bugs) from points along the river in the vicinity of slickens where metals pollution was especially bad. They sampled upstream and downstream of the slickens and at the point of suspected discharge in the river after a major rain.

“The samples looked horrific below the discharge point,” Thomas said. “There was nothing living in there. It was a good indication that these rain events, these downbursts breaching the berms, were killing the bugs.”

Alex Leone, an Anaconda-based restoration policy manager for the Clark Fork Coalition, has been among the people championing collaboration in service of enlightened remediation.

Fylling has credited Leone for helping create partnerships among researchers and educators working in the upper Clark Fork River.

Leone did not play a role in creating the Working Group but applauds its contribution to the river cleanup.

"The UCFWG has done a good job connecting scientists researching the river with the restoration professionals tasked with cleaning it up, which is incredibly valuable," Leone said. "The next piece of the puzzle is finding a way to make the research more relevant for managers on the ground."

Money from the Consortium for Research on Environmental Water Systems, or CREWS, has helped fund research by the University of Montana and Montana State University. Leone said this funding “has helped bring some real ‘muscle’ to the upper Clark Fork research universe.”

Martin said the diversity of research underway in the upper Clark Fork and the sharing of data among researchers will provide key information in the years to come.

“The research and monitoring that is occurring today will help today’s managers and, more importantly, tomorrow’s managers make decisions that will be successful and based on data and facts, not assumptions,” he said.

“What we do over the next 15 years will establish the long-term trajectory for how the upper Clark Fork River recovers from its mining-impacted past,” he said. “The Upper Clark Fork Working Group supports decision making based on current, accurate information so the river’s pathway to recovery can be the best one possible, given what we know.”

For more information, go to: ucfwg.org

Threatened by a blinding snowstorm in the Bob Marshall Wilderness, a young trapper relies on the hooting of an owl to rescue him.

Stratton Bohl, left, Colton McCall and Connahr Lalley take measurements this summer along the upper Clark Fork River to determine streambank resistance to erosion. The University Of Montana Western students are among a host of students, professors, scientists and others sharing details about their research on the Clark Fork.

Members of the Montana Osprey Project draw a blood sample from one of the three chicks living in the nest at Warm Springs Ponds. Blood and feather samples help researchers with the ecotoxicology work being done in conjunction with the EPA Superfund cleanup of the area. Ospreys are the top species in the aquatic food chain and analysis of their blood and feathers helps determine the health of an aquatic system.