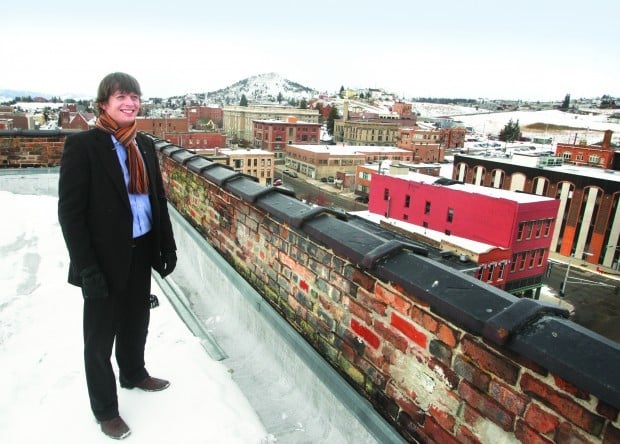 Hirbour Block owner Nick Kujawa plans to build a deck on the roof of the 97-foot tower for condominium owners to enjoy the panoramic views of uptown Butte. Photo by Walter Hinick/Montana Standard 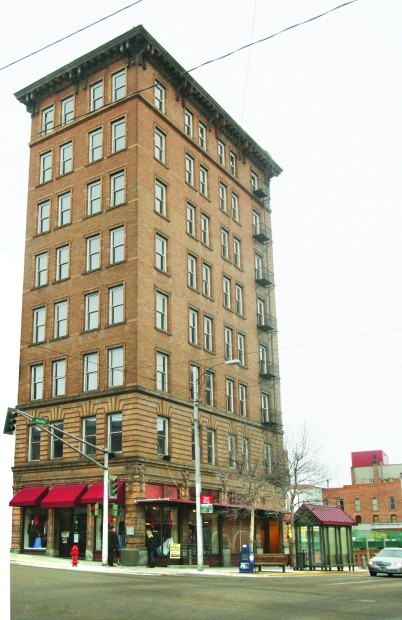 The new owner of the Hirbour Block, Nick Kujawa plans to build a deck on the roof of the 97-foot building at Broadway and Main for condominium owners to enjoy the panoramic views from Uptown Butte.
By Tim Trainor of The Montana Standard

Fresh off the renovation of the Sears Building, Nick Kujawa is tackling a taller, albeit much skinnier, project.

Kujawa purchased Hirbour Tower, located on the northeast corner of Broadway and Main, earlier this month with plans to turn it into seven upscale condominiums. The building, erected in 1901, is known as "Butte's first skyscraper" because of its internal construction of vertical steel girders.

"This is a very sound structure," Kujawa said. "Compared to the Sears Building, it's in really good shape."

The Hirbour was built as a grocery store but has most commonly been used as commercial office space for insurance companies, lawyers and other professionals.

Kally's Korner, a women's retail clothing store located on the building's street level for the last 27 years, will remain. The floors above it, which are believed to have been vacant since the mid-1990s, will get a full makeover.

Kujawa said while trying to fill his rentals at the Sears Building, he often heard from customers who were looking to buy rather than rent.

"You hear that 20 times or so and you start to think there may be a market out there," he said.

He had been talking with the Hirbour's previous owner, Jeff Francis, for more than three years about acquiring the

110-year-old building. Earlier this month they finally completed the transaction, and Kujawa said he hopes to get started with construction this summer and be finished by spring 2012.

He said the cost of the renovation would be "in the millions."

Plans call for one condominium on each floor of the building, approximately 1,500-square-feet with two bedrooms and two bathrooms. Kujawa said prices will start "in the low 200s."

The condos can be accessed only through a secure Broadway Street entrance. An elevator, which will open directly into each resident's apartment, will take them to their floor via a room key.

All residents will have access to the roof, located more than 100 feet above the street below, where Kujawa said he would build a deck.

Kujawa said he would look to local banks and the Butte-Silver Bow Urban Revitalization Agency to help finance the work. Because he is not building rental properties, many of the tax credit programs he utilized in the Sears Building are not applicable at the Hirbour.

He said he would work with the Historic Preservation Commission to make sure all of the construction stays in keeping with the building's historic value.

To reserve a condominium or for more information, visit www.hirbourtower.com.

Hirbour Block owner Nick Kujawa plans to build a deck on the roof of the 97-foot tower for condominium owners to enjoy the panoramic views of uptown Butte. Photo by Walter Hinick/Montana Standard

The new owner of the Hirbour Block, Nick Kujawa plans to build a deck on the roof of the 97-foot building at Broadway and Main for condominium owners to enjoy the panoramic views from Uptown Butte.
© Copyright 2021 The Montana Standard, 25 West Granite Street Butte, MT | Terms of Use | Privacy Policy
Powered by BLOX Content Management System from TownNews.com.
You don't have any notifications.