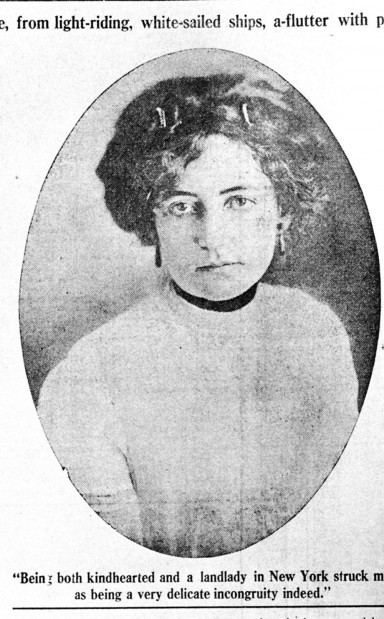 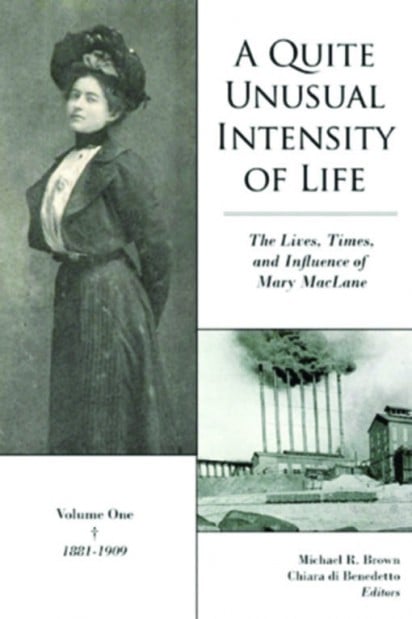 By John Grant Emeigh of The Montana Standard

“May I never, I say, become that abnormal, merciless animal, that deformed monstrosity — a virtuous woman.”

She made love to many men. Women, too. She wanted to marry the devil. And she wasn’t ashamed to tell the whole world about it.

This Butte native wasn’t your typical Victorian-era wallflower fated to a life of dreary tea parties and quiet servitude. Instead, she was outspoken, scurrilous and controversial. A precursor to the Jazz age, she flaunted her independence, sexuality and uninhibited mind like a sparkling new flapper dress.

Publisher Michael R. Brown happened to stumble upon this incorrigible woman’s writing about 25 years ago and was,

“It was like putting my finger in a light socket,” Brown told The Montana Standard recently in a telephone interview from San Francisco. “I was blown away by her writing.”

Brown, along with co-publisher Chiara di Benedetto, plans to release a book in September about MacLane called “A Quite Unusual Intensity of Life: The Lives, Times and Influence of Mary MacLane.”

Brown has spent the past six years researching MacLane’s life for his book. The book tells MacLane’s story through her writing and other written works about her life. It features the full text from her three books, feature articles and interviews with this

mysterious woman, more than 150 letters to family, friends and literary figures of her time as well as

subtitles from a silent movie which she wrote and starred in. The collection is expected to be a voluminous 1,200 pages.

INTERNATIONAL FAMEAt 19, MacLane suddenly erupted into international fame with the 1902 publishing of her autobiographical book, “The Story of Mary MacLane.” She wrote the book while living in Butte and gave candid descriptions of her exploits with men, lust for women and intrigue with devils. The frank diary is said to have sold 100,000 books within its first month, according to Brown, and gave her the label “wild woman of Butte.”

Her work was praised by some and reviled by others at the time.

“Some hailed her as the next great American writer and others said the publisher shouldn’t have wasted the paper by printing her book,” Brown said.

The views and depictions expressed in MacLane’s book were ideas that most women won’t dare to write about during her time, Brown said. MacLane, who was born in 1881, lived

during a time of strict moral codes that were often pushed by anti-vice groups spouting temperance and chastity. The young diarist certainly cut against the grain.

“She didn’t internalize any of her repressions,” Brown said.

Her writings were uncannily open and blunt. Brown describes her as one of the first confessional memoirists, who wrote with the same direct style of a modern blogger.

“Her writing was raw, but she was artistic about her rawness,” he said.

She became an instant and infamous celebrity once her first memoir was published. Through his research, Brown discovered there were at least three parody books on MacLane and three plays that premiered in New York that had characters based on her. She was discussed in the literary press as far as England, France and even Australia.

FEATURE FILMOne of the fascinating things Brown discovered while researching MacLane was a 90-minute feature film she made in 1917. The silent film titled, “The Men Who Have Made Love to Me,” was written by and starred MacLane, which Brown says was unusual for a woman in that era.

Brown notes that the term “made love” at that time meant to be wooed and not the actual act of sex. While no known copy of MacLane’s film exists, Brown said he found subtitles and read reviews of the film. The movie apparently features six men from different walks of life trying to win her affection. Brown said the movie has some scenes where MacLane smokes a cigarette and speaks directly to the audience about each affair.

Though the film is lost to history, Brown hopes to find it someday because it was distributed around the world.

“There may be a copy of the film in some attic in Australia or Tasmania,” he said. “We haven’t found it yet, but we’re still looking.”

Brown found a clipping from a Hollywood trade publication after MacLane’s death in which the enigmatic movie star Greta Garbo reportedly said she wanted to remake “The Men Who Have Made Love to Me” and play the MacLane role.

Brown also claims his research revealed new information about MacLane’s mysterious final days. She died in August of 1929 at age 48.

He plans to return to Butte in September for a book signing since her time living in Butte was a major influence on her work. Though she often talks disparagingly about Butte in her early work, Brown said she gained a new affection for the Mining City later in life.

“She was quoted as saying, ‘I’m just Mary MacLane from Butte and that’s all I know,’” he said.

—Reporter John Grant Emeigh may be reached via e-mail at john.emiegh@lee.net.