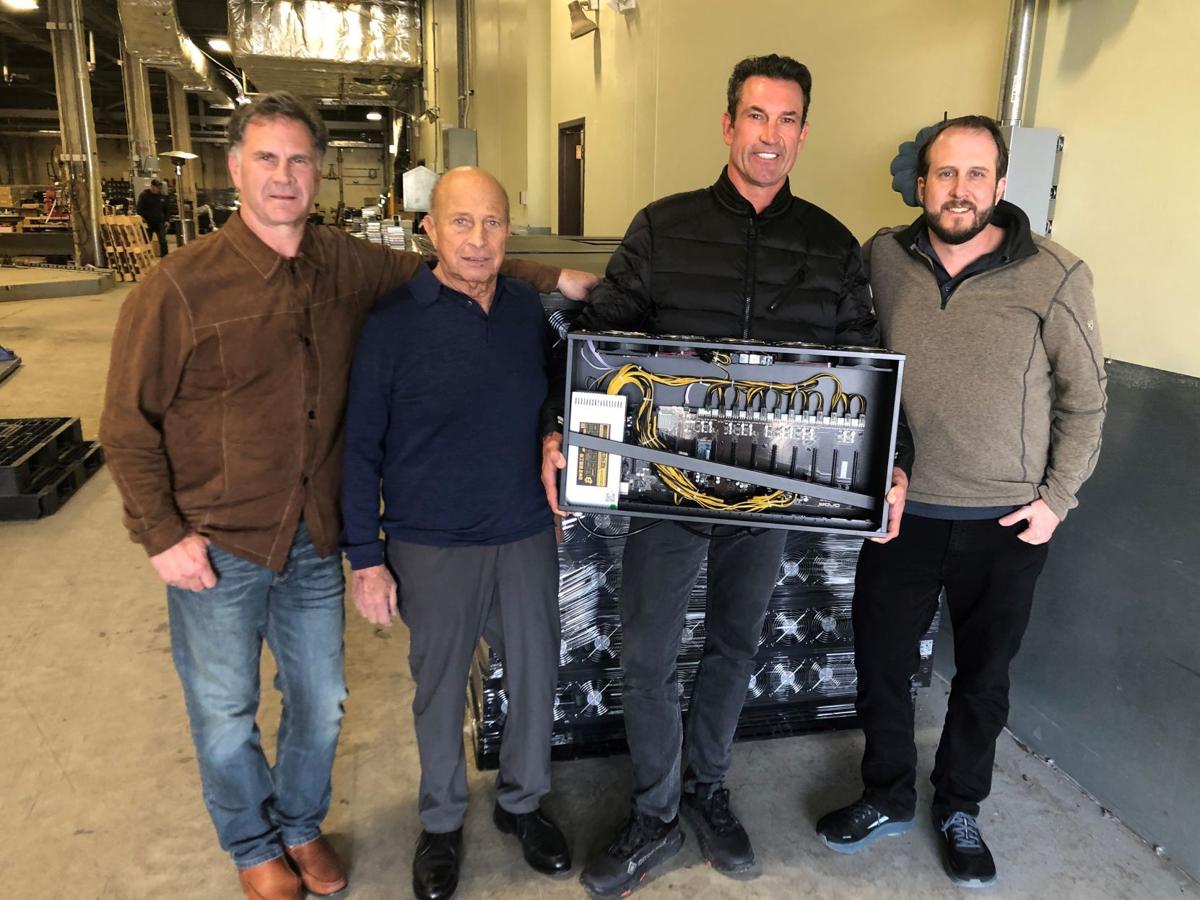 Kevin Washington holds one of his new GPUs. He's flanked by, from left, Rick Tabish, Milt Datsopoulos and Hayden Gill. 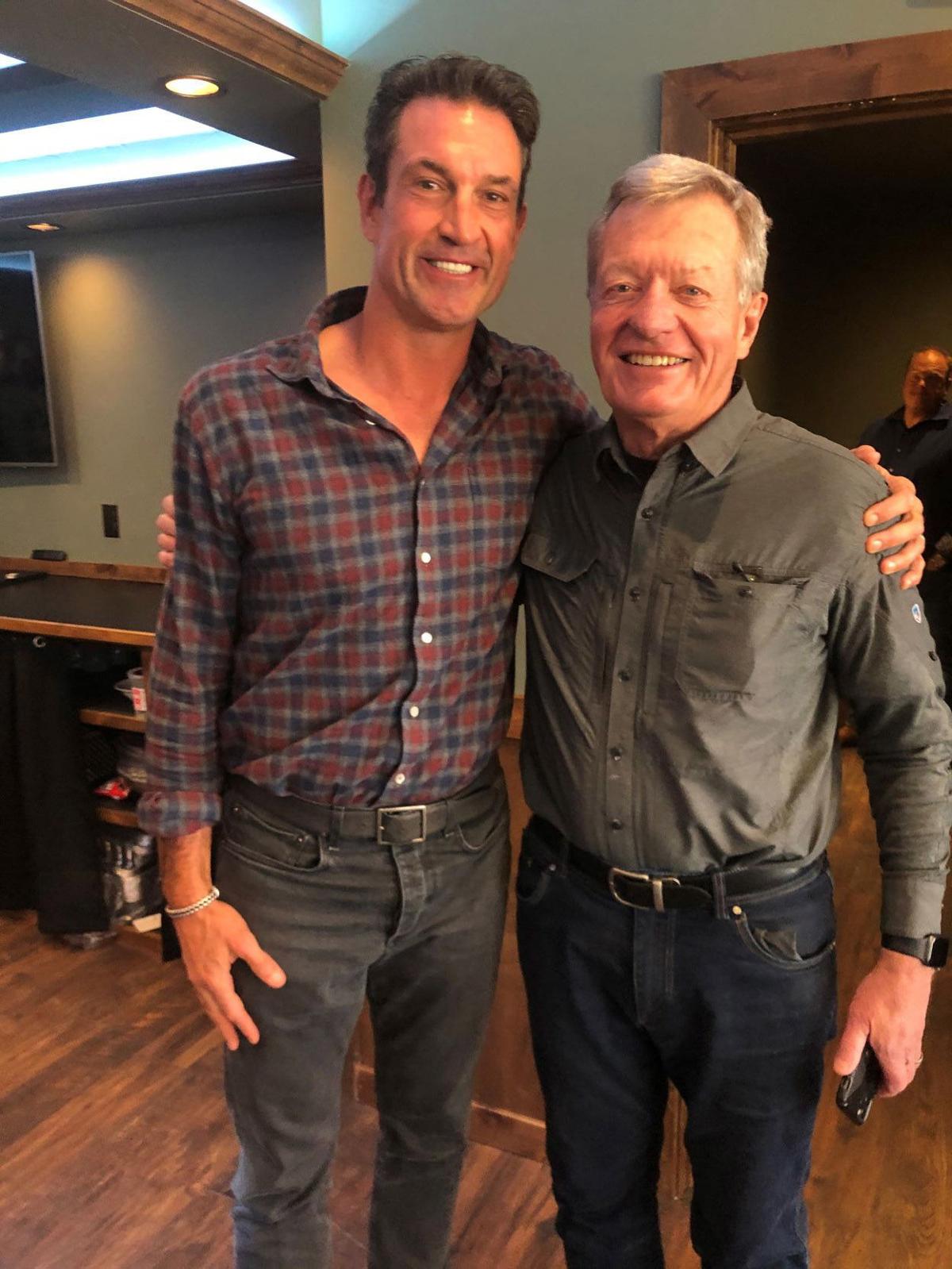 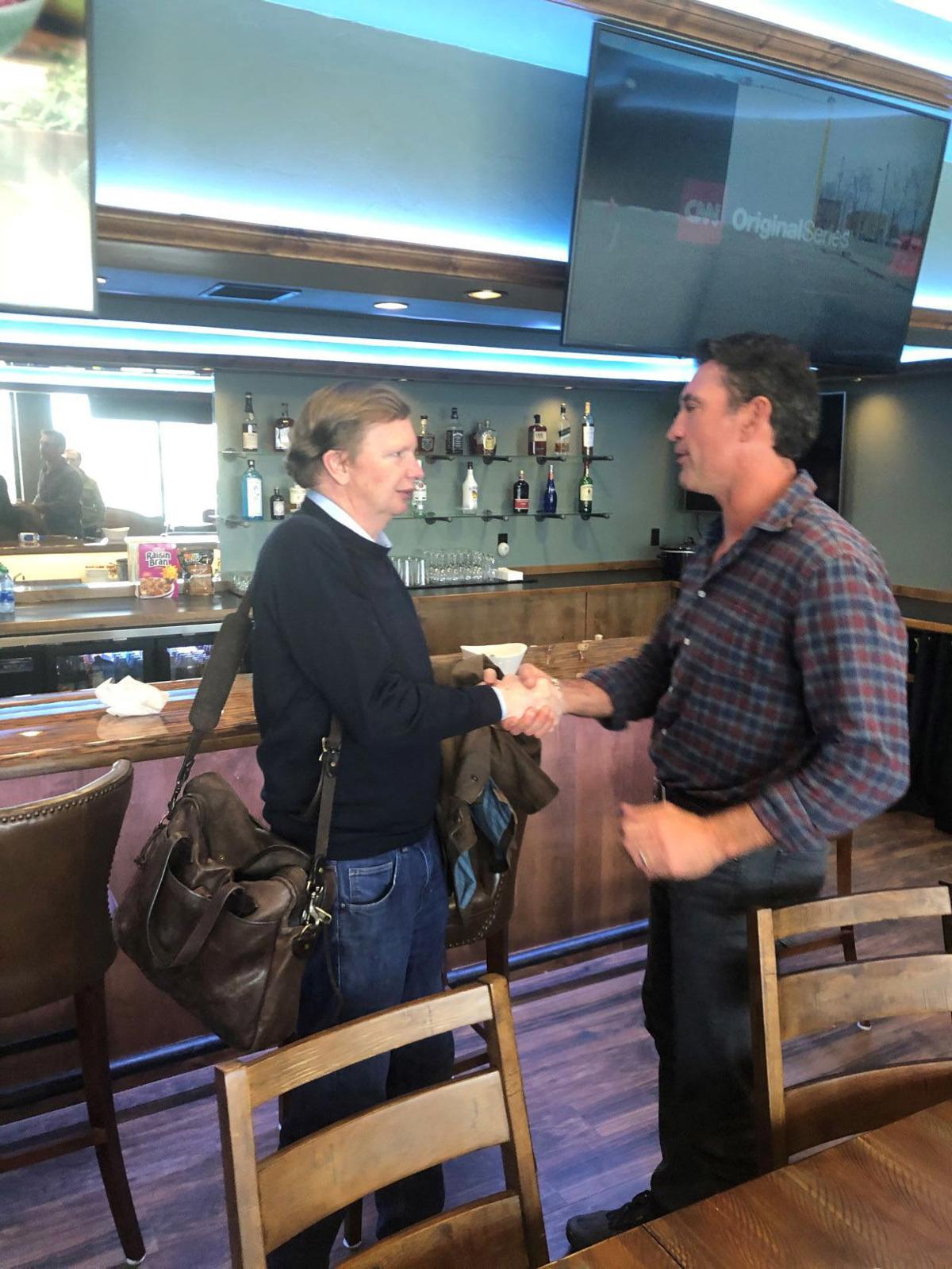 When last we checked in on what was happening at CryptoWatt, the sprawling, uber-engineered Butte complex bristling with Bitcoin servers, it was this: In a diving grab, industrialist scion Kevin Washington had wrested control of the company from a federally indicted accused fraudster and managed to salvage its all-important power contract, days before the place would have been shuttered forever.

Washington didn’t just manage to turn the lights back on. Instead, he has in a year’s time turned the diving grab into one of the world’s largest cryptocurrency factories.

With $200 million worth of new servers mining cryptocurrency at a world-class rate, Washington is beyond doubt making huge bank. But he’s not stopping there. He’s literally put his own brand on the place — it’s “CryptoWatt” no more. Now it’s “Atlas Power,” named after his 2-year-old son, Atlas Donahue Washington.

Washington is seeking to add eight more buildings full of servers — and a 1,600-acre solar array to power the juice-guzzling data center with green energy. And a high-tech academy. And hosting for “white glove” data clients. And collaboration with other energy-data projects. And. And. It’s like one of those old late-night TV ads: AND THAT’S NOT ALL YOU GET!

How is he doing all this? Vision, guts and gambler’s luck.

Which sounds a lot like how his Dad became the richest man in Montana, but that’s a whole other story.

Let’s start with the “guts” part.

Kevin Washington had invested in CryptoWatt a few months before Colorado Bitcoin entrepreneur Matt Goettsche, then the majority owner, was indicted — not for anything involving the Butte plant but rather in what federal prosecutors allege was a $722 million Ponzi scheme involving another company Goettsche founded, BitClub Network. Since his arrest in December 2019, three of his primary codefendants have pleaded guilty. Goettsche has rejected a federal plea deal and is scheduled to go to trial later this year.

After Goettsche’s indictment and as he went to court to try to gain control of the Butte facility, Washington said he was Goettsche’s “biggest victim — by a mile,” and that the Colorado man had stolen millions in Bitcoin Washington was owed.

Also allegedly stiffed by Goettsche for millions was Rick Tabish, whose company had supervised the construction of the Butte plant and had managed the plant for Goettsche — and had done extensive work on a data-plant site for Goettsche in Broadview.

In a supreme irony, Washington and Tabish initially sued Goettsche in Butte District Court. But Goettsche, supposedly wary of being in the hands of the “Butte good old boy network,” had his attorneys move the suit into federal court.

In the court-supervised settlement, Kevin Washington managed to gain control of the company.

But he had to write a big check to do it — several million dollars.

“It hurt to write that check,” Washington said. “The guy had already stolen $30 million from me and now I had to pay him millions more.”

But he did it. And immediately afterward, he went into debt for north of $100 million in capital expenditure to install new servers and massively increase the plant’s revenue-generating capacity.

When you can look a situation in the eye, and push every chip you can reach into the center of the table, believing in your own judgment, that’s called guts.

“Blockchain is for real, and I knew longterm it would be a great business,” Washington said. “Now, the only barrier for data centers like this is power, and I believe green energy is the answer.”

In early 2020, just as Washington was pushing all those chips, cryptocurrency prices were bouncing along within a pretty small range of fluctuation. Bitcoin, which was CryptoWatt’s stock in trade, was not losing money, but it was staying pretty flat, well under $10,000.

Then came the biggest bull run in crypto history.

If you look at a Bitcoin price chart, the currency edged higher throughout last year, then, in January 2021, began a huge, steep climb, hitting $60,000 earlier this month.

There are still some of the old Bitcoin servers hashing away at Atlas Power, making Bitcoin at the new gaudy prices. But Washington has managed to capture the crypto bull run in a different way, going all in for Ethereum, the second-most traded cryptocurrency.

Ethereum has been around since 2015, when its initial price was $1 per Ether, or block of the currency. This month, Ether topped $2,000.

With his new, far more flexible servers capable of doing much more than simply mining Bitcoin, Washington has been in prime position to take advantage of Ethereum’s dizzying rise. With tens of thousands of the new GPUs, or Graphics Processing Units, sourced from Advanced Micro Devices, Washington is able to do far more than mine crypto. The HPC — high-performance computing — that the new servers deliver can be used for artificial intelligence work, in high demand everywhere.

But for now, every one of his new servers is mining Ethereum. If as planned he adds thousands more processors in his planned expansion, expected to come from Nvidia, leading makers of machine-learning processors, it will give Washington the capacity to be the biggest miner of Ethereum in the world.

If he isn’t already.

“Kevin’s vision of high-performance computing is light-years ahead in the industry. The model is not just Bitcoin-centric,” Tabish said. “His foresight in converting to GPUs and gaining computing flexibility put him at the top of the heap.”

Tabish, Washington, and Washington family attorney Milt Datsopoulos were at Atlas Power on a recent Monday afternoon, along with Hayden Gill, Washington’s hardware-sourcing guru (“The best thing I did was get Hayden,” Washington says, and he did it the old-fashioned way — by simply buying Coin Miner LLC, the company Gill led as CEO.) Also present were a representative of Nvidia — and two political giants.

Max Baucus, for 35 years a United States senator from Montana, former chairman of the Senate Finance Committee, and also former U.S. Ambassador to China, was visiting along with Jim Messina, former Obama campaign manager and deputy chief of staff.

Both Baucus and Messina are hugely interested in the crypto space.

The global cryptocurrency giant Binance announced earlier this month it had hired Baucus to advise the company “on government and regulatory efforts including building strong relations with U.S authorities and regulators.”

Binance, based in Malta, operates the world’s largest cryptocurrency exchange by volume, and its branches in every area of crypto amount to an entire “ecosystem,” the company says.

Binance CEO Changpeng Zhao said, “We’re excited to welcome Max to our team. His experience at the highest levels of government and intimate understanding of global regulation brings exceptional value.”

Clearly Messina and Baucus both have one thing in very high global demand right now: Great contacts with, and access to, the Biden Administration.

Both would be assets to Atlas Power as advisory board members, and conversely the company’s bold reach in data and green energy is clearly intriguing to both.

Their presence in Butte was an indication of how far Washington has come.

As a buffet lunch is served at the company’s private bar tucked away in one of the anonymous-looking buildings on the site, Washington and Tabish are high-spirited and voluble. Washington spins out plans for a company that he sees going from regional to national to global in scope — and could one day soon be taken public.

Baucus and Messina listen intently. Tabish, who has a similar plan for the Broadview plant he won control of in the receivership, interjects frequently.

At one point in the conversation, Baucus says, “Isn’t Rick Tabish involved in this operation?”

Datsopoulos, sitting next to his old friend Baucus, smiles.

It’s in the combination of renewable energy sources and data centers that Washington sees the big payday down the road.

Increasingly over the months of cryptocurrency’s bull run, the pushback has been, “But it’s such a dirty industry, it uses so much power.”

So linking to a proprietary clean-energy source would take that significant stain from a large-scale crypto business — and also would dramatically increases margins. It’s no accident that “Power” is in Washington’s company name.

The 1,600 acres Washington is negotiating to lease from the Gozden-McDermott Ranch, adjacent to his facility, is enough to place a large solar generating complex. With today’s super-efficient bifacial solar panels, the industry standard is around a megawatt for every 2.5 acres. That’s an impressive amount of power potential.

The plan will require a special-use permit from Butte-Silver Bow.

John McDermott, owner of the ranch, said he’s been working on potential solar projects “since 2015,” but this one makes a lot of sense.

“It’s a great project, a green project, and we’re following all the rules and guidelines,” said McDermott, who is also a real-estate agent.

The facility’s eight new buildings will not need zoning approval, since the property is appropriately zoned. But Atlas is working with Butte-Silver Bow on building, electrical, storm water and excavation permits, among other things.

Meanwhile, in tiny Broadview in the northwest corner of Yellowstone County, Tabish has huge plans. He received a 350-acre parcel — upon which he had already completed millions of dollars’ worth of prep work for a 300-megawatt data center, and he is negotiating with Broad Reach Power, which owns a three-gigawatt portfolio of renewable energy power and power storage projects across the West including a big wind project at Broadview.

Mark Klein, chief operating officer for Broad Reach, said Saturday his company is looking forward to working with Tabish as they develop their own hybrid renewable project of wind, solar and battery storage at Broadview.

He said Tabish’s data center “is a great fit” with the entire Broadview energy picture.

Tabish also has millions in equipment ready to deploy. He too wants to utilize the GPU model. And he’s surrounded by wind and solar, so a collaboration with Broad Reach makes perfect sense. And there will be “great synergy” with Washington’s project, he said.

He’s moving fast — his stock in trade. Tabish speaks in staccato: “We want to build this out yesterday.”

Milt Datsopoulos loves talking about that time Dennis Washington singlehandedly jump-started a Butte economy hurting after Atlantic Richfield closed up shop. The opening of Montana Resources came at a time when Butte’s unemployment rate was around 20%. (He lit up with a big grin when it was mentioned that right now, copper prices are pushing into near-record $4 levels.)

But the Missoula lawyer is equally pleased to talk about the next generation: “Another Washington, another kind of mine, and this one too is great for Butte, great for jobs.”

It certainly looks that way.

Stories from 2021 that resonated with David McCumber, editor of The Montana Standard

Fire, loss, power and passages. 2021 was a year of many milestones.

This drawing shows the proposed expansion at Atlas Power.

Fauci: Covid may not end, hopes to find normalcy

Fauci: Covid may not end, hopes to find normalcy

Kevin Washington holds one of his new GPUs. He's flanked by, from left, Rick Tabish, Milt Datsopoulos and Hayden Gill.