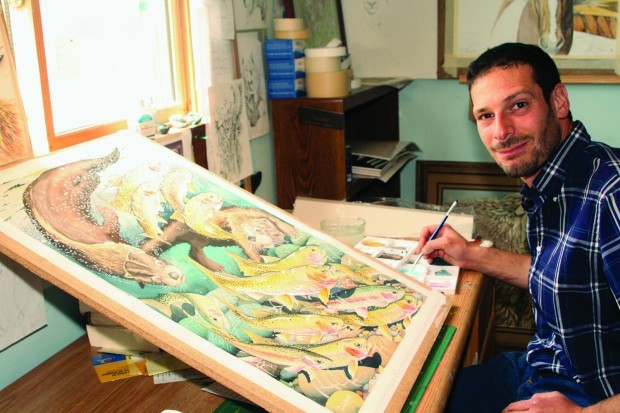 Zach Babat is pictured in top photo working on a watercolor piece in his studio in Waterloo. 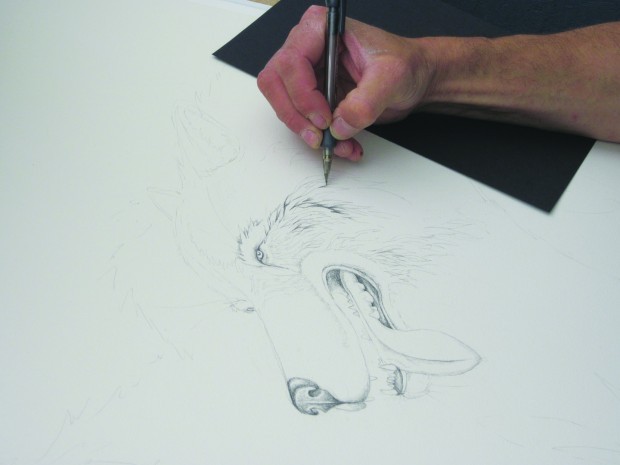 Artist Zach Babat pencils the outline of a wolf on a work in progress.
Story and photos by Paula J. McGarvey for The Montana Standard

Zach Babat has worn many hats. Whether working as a Montana hunting guide, Alaskan bush pilot or Western artist, Babat’s passion for wildlife has remained central to his work.

“The animals are the part, for me, that bring endless inspiration,” he explained, during a recent interview at his home studio in Waterloo.

Babat was born in New York, and it was there he developed an interest in hunting and fishing. He gravitated to the West as a young man — fueled by the same sense of adventure that pulled the pioneers across the plains in the 1800s. In awe of the vastness and contrast of the Western landscape and its animal inhabitants, he sought work that would keep him intimately involved with both.

He first met his wife, Kerry Pride of Ennis, while working as a Montana hunting guide back in 1990. Zach moved to Alaska several years later. Kerry joined him in Alaska in 2002, and the two got married in March 2004.

While in Alaska, Kerry, a veterinarian by profession, continued her education, earning a master’s degree in public health at the University of Alaska in Anchorage. Zach worked as a bush pilot.

“The best job I had was landing on the glaciers of Mt. McKinley, he said.

By 2006, Zach and Kerry were both ready for a change. Kerry was longing to return “home” to Montana and Zach was in agreement. Despite the grandeur of the animals of Alaska, Babat said that he has found the wildlife in Montana to be much more accessible to the observer.

“This is a wildlife artist’s dream,” he said, describing the state.

The two purchased a ranch in Waterloo and began farming hay. Kerry picked up additional work as a relief veterinarian, while searching for a position in public health. With his wings temporarily clipped and the same unbounded energy and enthusiasm as the otters he paints, Zach found himself in desperate need of an activity to release his verve.

Having been born with innate artistic abilities and a need to stay occupied, he picked up a pencil and a paint brush. “I just started painting and sketching animals,” he said.

In the process, he discovered a new passion and taught himself to use watercolor as a medium for artistic expression. “I’d rather be painting a picture than flying an airplane,” he confessed.

When asked why he chose watercolor for his primary medium, Babat replied:

“There are so many different mediums an artist can choose. I think it chooses you.”

Babat also reflected on the intricate link between water and life in the natural world he captures with his art. And, watercolor seems to be the perfect compliment for his personality.

In Babat’s opinion, oils take “too long to dry” and working with acrylics is akin to “painting with toothpaste.”

“The thing about water color is that it’s very fast,” he said.

Thought Babat regularly returns to Alaska, taking on bush pilot work when he can, he spends much of his time in Montana—creating, showing and marketing his artwork. When asked how much time each week he spends in the studio, he replied:

“Not enough. I definitely spend more time on the business end. The reality is that if you really want to do it for a living, you have to make it a business, first.”

For more information about Zach Babat and his art, visit www.zachbabat.com .

A Butte woman died Sunday morning on Highway 2 in Jefferson County when her eastbound car struck a boulder head-on in a steep and rocky road cut.

The fire that destroyed the historic M&M Cigar Store on May 7 reminded us all that we’ve been down this road before — many, many times. With the number of major fires Butte has sustained since its infancy, it’s truly a miracle the town has remained standing.

Vaccine sweepstakes in Butte could pay out $35,000 weekly; sheriff, others cut radio spots

A Bozeman-based modular home manufacturer, Foothold, is setting up shop in Butte.

Zach Babat is pictured in top photo working on a watercolor piece in his studio in Waterloo.

Artist Zach Babat pencils the outline of a wolf on a work in progress.
© Copyright 2021 The Montana Standard, 25 West Granite Street Butte, MT | Terms of Use | Privacy Policy
Powered by BLOX Content Management System from TownNews.com.
You don't have any notifications.