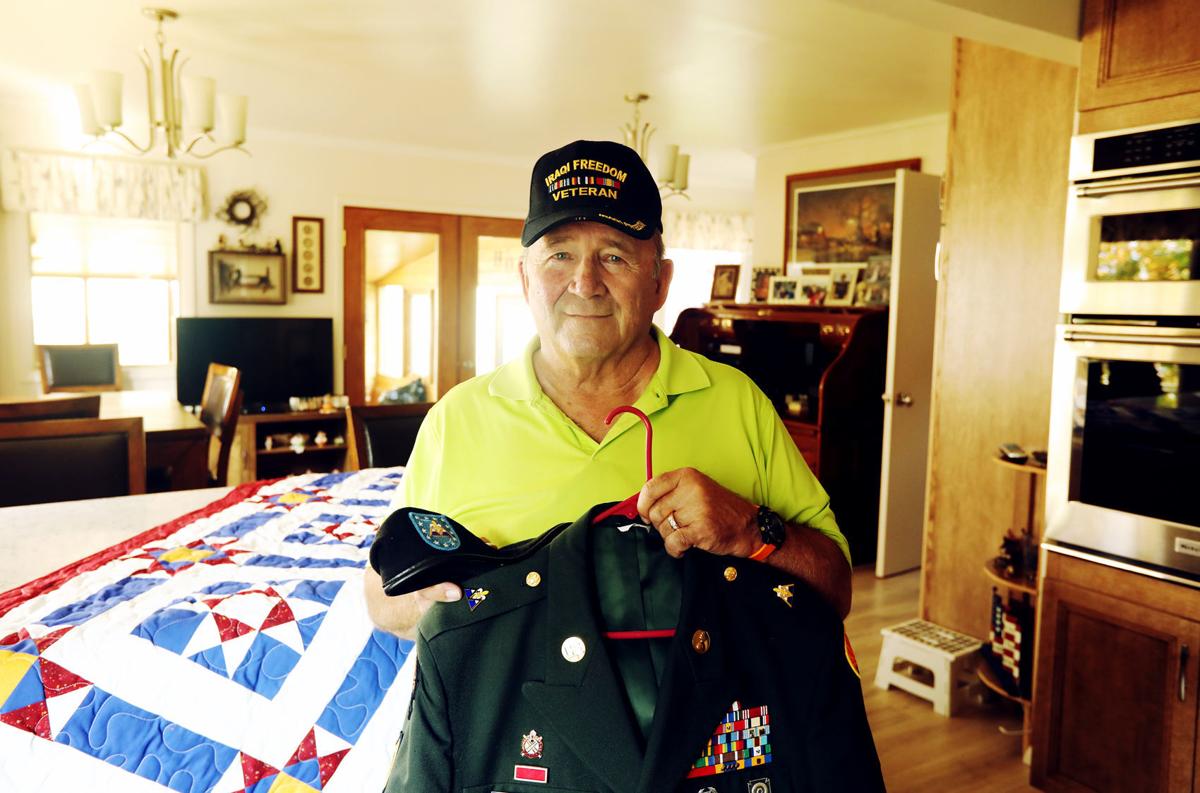 Errol Eileraas is photographed in his home with his uniform and a quilt that was given to him honoring his service. 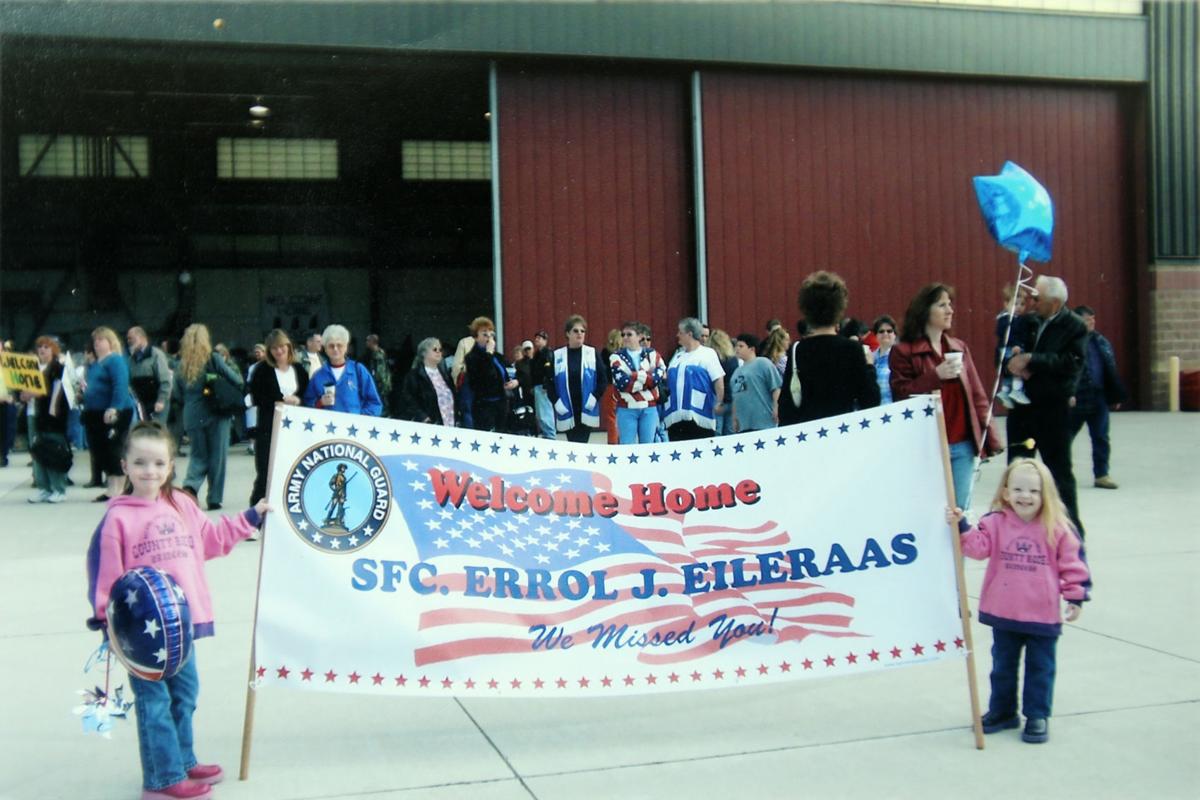 Errol Eileraas is welcomed home from his service in Iraq by his family as his two grandchildren hold a sign. 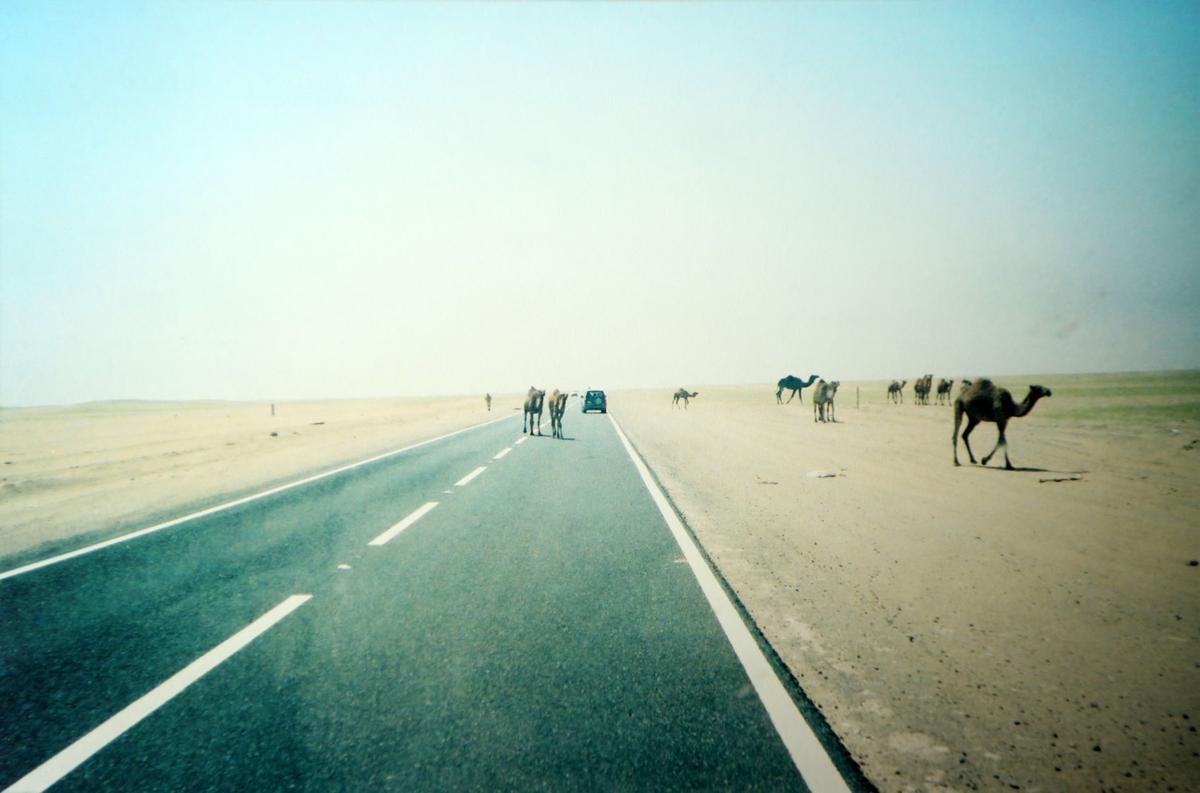 Camels cross a highway in this photo taken by Errol Eileraas while he was deployed in Iraq. 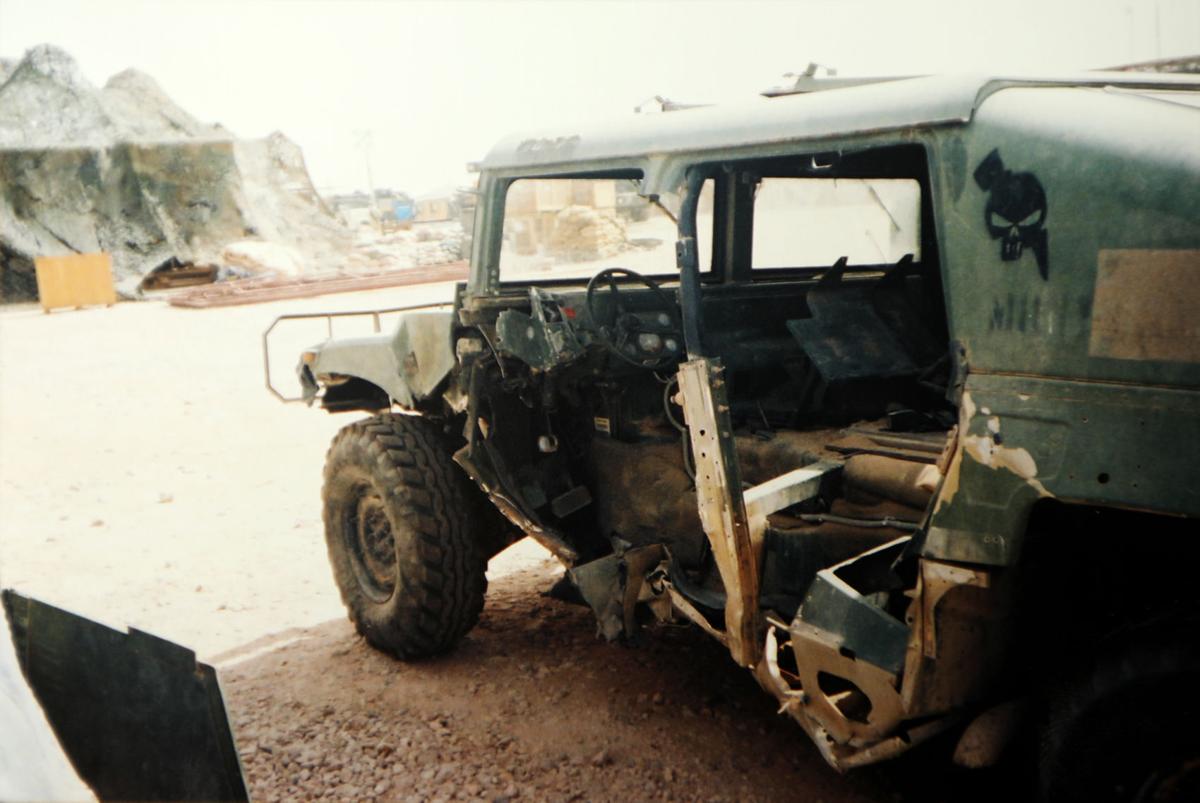 A photo from Errol Eileraas shows a military Humvee that was damaged by an IED in Iraq. Eileraas and others with mechanical training were tasked with fixing the Humvees. 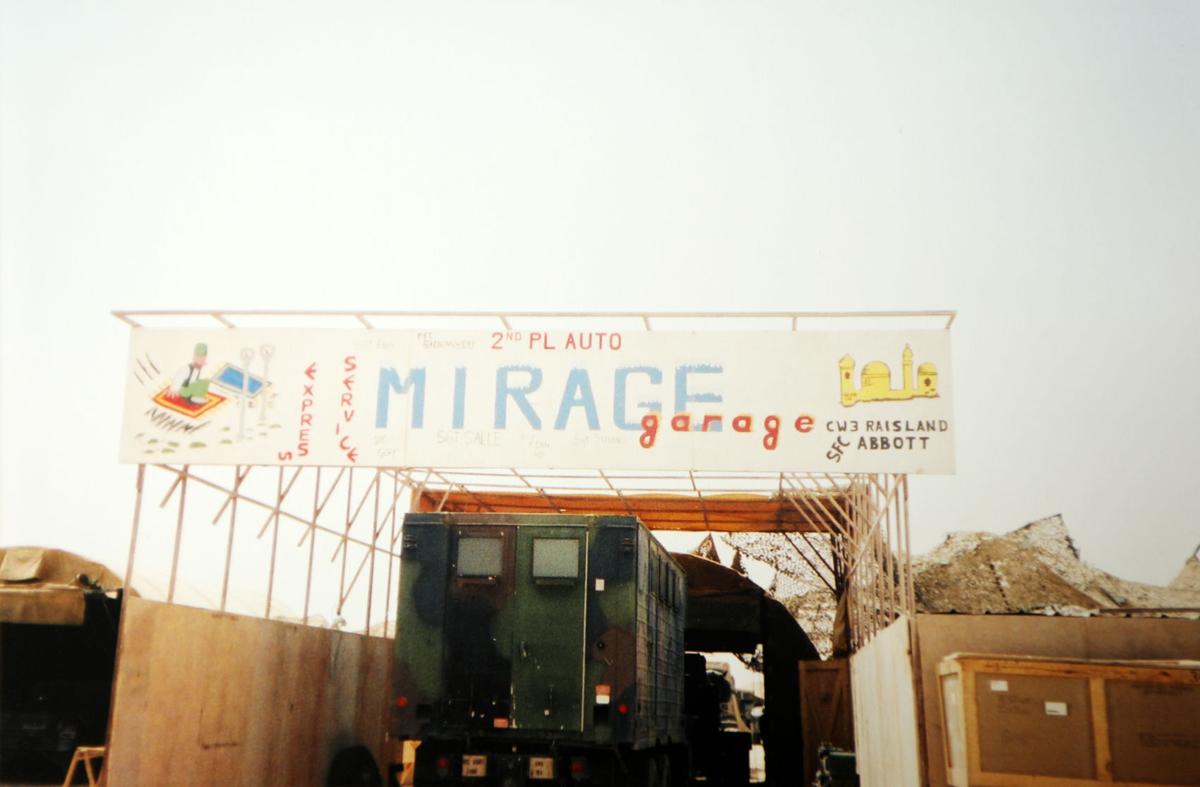 Errol Eileraas took this photograph of the Mirage Garage, the place where he and others worked while deployed in Iraq. 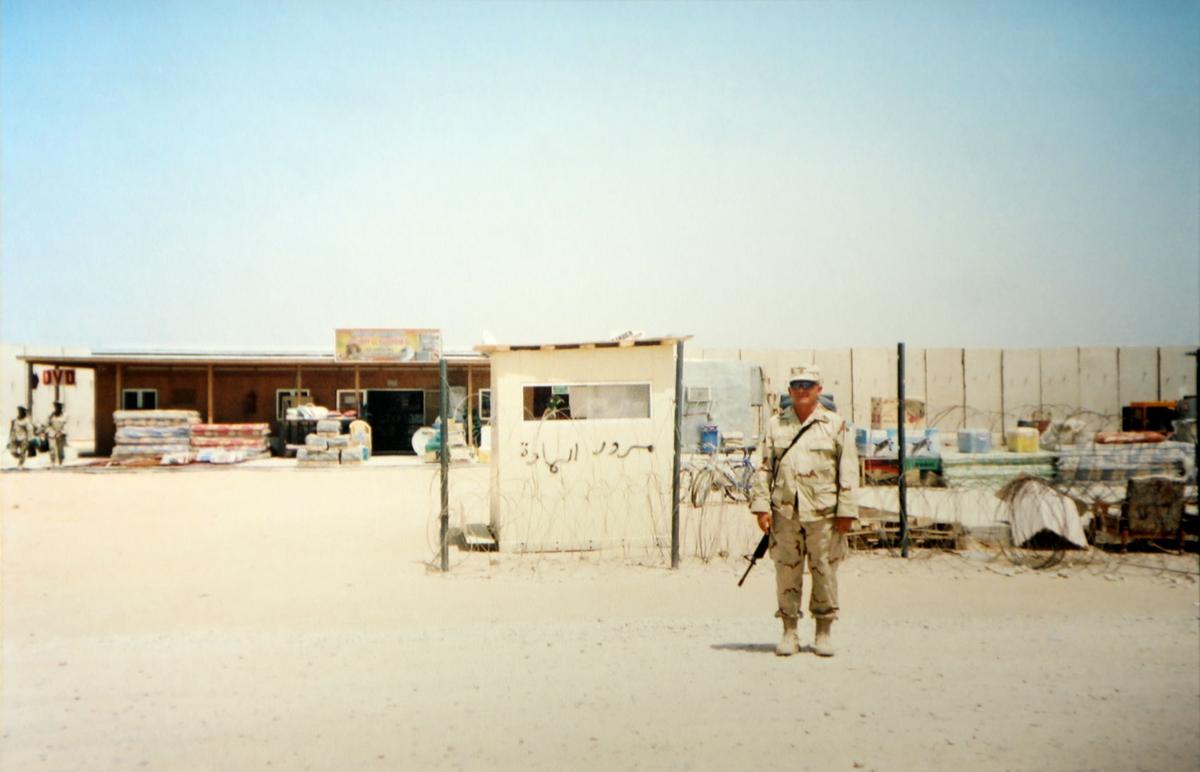 Errol Eileraas is photographed while deployed in Iraq.

A man processing Eileraas’ paperwork at Camp Anaconda, officially the Balad Air Base, said the locale had yet another name: “Mortaritaville.” a play on Jimmy Buffett’s “Margaritaville.”

“I’d been on the ground for about 10 minutes when we got our first mortar attack,” he said.

Eileraas deployed as an Army National Guard soldier with expertise as a heavy mobile equipment mechanic. He traveled to Iraq during a time when a U.S.-led occupation of Iraq was opposed by a violent insurgency after the end in 2003 of the conventional, also known as the Iraq War or Second Persian Gulf War.

At age 58, Eileraas was one of the oldest soldiers at Camp Anaconda.

“I’d much rather they sent me than my son or my son-in-law,” he said.

He served at Forward Operating Base Duke as a maintenance inspector whose duties included troubleshooting vehicles and equipment to identify problems and potential repairs.

The vehicles Eileraas inspected included Humvees heavily damaged by the bane of coalition forces in Iraq — the improvised explosive devices, or IEDs — planted by insurgents.

Many vehicles could be repaired. Some could not. In some, American troops had been killed or grievously injured.

Eileraas’s life had provided the experiences and the mentors needed to develop an expertise in mechanical repairs. His first paying job was in the shop bay of Eileraas Buick in Anaconda.

He said Fred Hayes of Anaconda was a key mentor.

“He taught me more about auto mechanics than you would ever get from a school,” Eileraas said.

He graduated in 1966 from Anaconda High School. Three members of his graduating class died in Vietnam.

In January 1967, Eileraas joined the Army National Guard’s combat engineers unit in Anaconda. He was required to devote one weekend a month and two weeks a year to National Guard duty.

Ultimately, the National Guard would become his career, but Eileraas didn’t know that then.

In 1973, after contemplating a teaching career, Eileraas graduated from Montana Tech with a bachelor of arts degree in history. But he had realized quickly that he lacked the proper temperament for exercising restraint in the face of an aggressively defiant kid.

That same year, he continued to work for his father’s Buick dealership in Anaconda. He worked there from 1961 until his father’s death in 1978 and then ran the dealership before selling it in 1984.

Elmer and Helen Eileraas had met in Saskatchewan, where both grew up on wheat farms. Elmer was working as a salesman for Watkins Products and met Helen while hawking products door-to-door, thus becoming the traveling salesman meeting the farmer’s daughter.

Elmer moved to Anaconda in 1937 or 1938 and worked for Torgerson Brothers as a car salesman and parts man. He hired on then with Reed Motor Co. before launching Eileraas Buick in 1952.

Elmer and Helen had one child – Errol.

Errol and Betty Ann Ulstad married in July 1968. They have two children, Eric and Denise.

He was tasked with insuring that parts described in a “mandatory parts list” were on hand for National Guard vehicles and equipment.

Eileraas then went to work for a time in a clerical role for Gene Prendergast, the officer in charge. The two men developed a relationship of mutual respect.

Later, Eileraas became a line mechanic in the shop. The change suited him fine, he said.

“I always enjoyed mechanical work – getting something to run that wasn’t,” he said.

He worked on 5-ton trucks, Humvees and other vehicles and equipment, including older jeeps and trucks for parades.

Eileraas ended up being promoted to assistant manager of the shop in Helena before being transferred in December 2003 to the Montana National Guard armory in Belgrade, where he became shop chief.

Eileraas retired from the National Guard in March 2008 as a master sergeant.

“I miss the people,” he said. “I loved running the equipment.”

When Eileraas joined the Army National Guard that decision wasn’t made lightly but it didn’t feel especially weighty either.

“I got into it as a social club. I had a college deferment. I was going to Montana Tech,” he said.

Years later, his time in Iraq stays with him.

Eileraas said he is proud of the work his maintenance group did there. He said a Marine colonel complimented the group’s knowledge, savvy and repair capacity.

“The colonel said, ‘I’ll take you guys to any war zone in the world,’” Eileraas recalled.

He choked up describing the bonds that can form with fellow soldiers in a war zone. His eyes glistened.

“We call them ‘battle buddies,’” he said.

Mexico City prepares for Day of the Dead parade

Errol Eileraas is photographed in his home with his uniform and a quilt that was given to him honoring his service.

Errol Eileraas is welcomed home from his service in Iraq by his family as his two grandchildren hold a sign.

Camels cross a highway in this photo taken by Errol Eileraas while he was deployed in Iraq.

A photo from Errol Eileraas shows a military Humvee that was damaged by an IED in Iraq. Eileraas and others with mechanical training were tasked with fixing the Humvees.

Errol Eileraas took this photograph of the Mirage Garage, the place where he and others worked while deployed in Iraq.

Errol Eileraas is photographed while deployed in Iraq.