Pence will keep traveling after exposure to infected aide; daily cases in US top 83,700 again 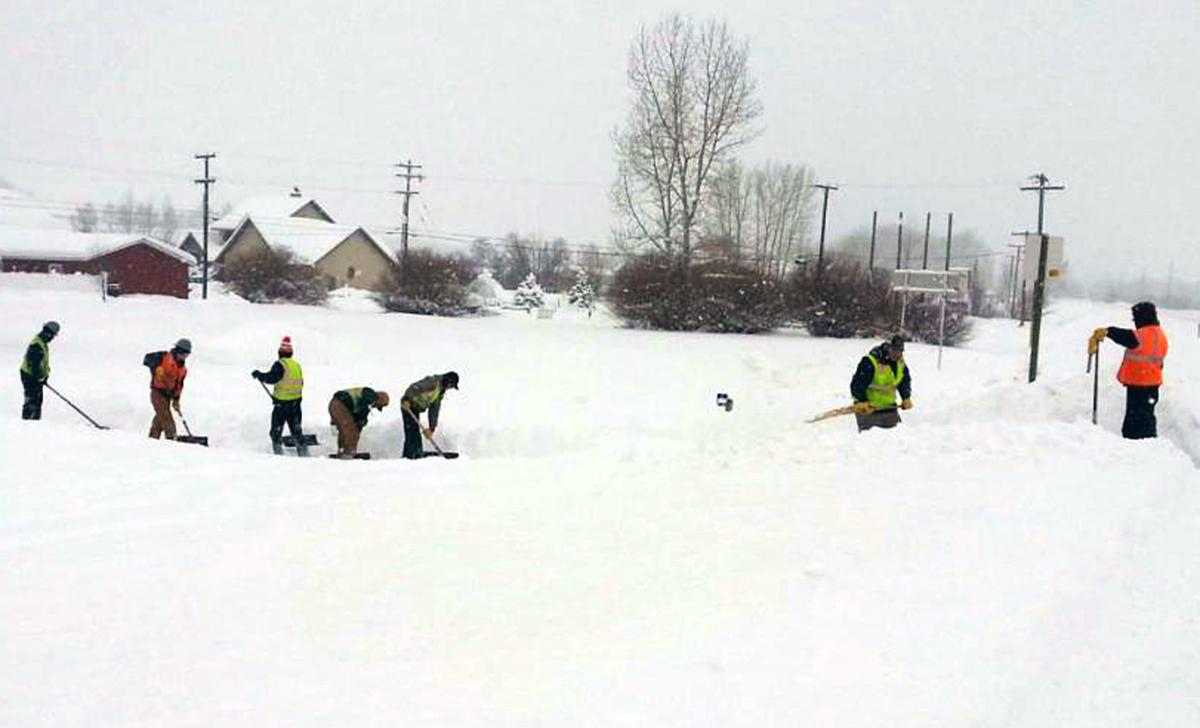 Young people from the Anaconda Job Corps work Wednesday to dig out fire hydrants from around seven feet of snow. Anaconda has been the hardest hit in southwest Montana from the relentless snow that has fallen this week. 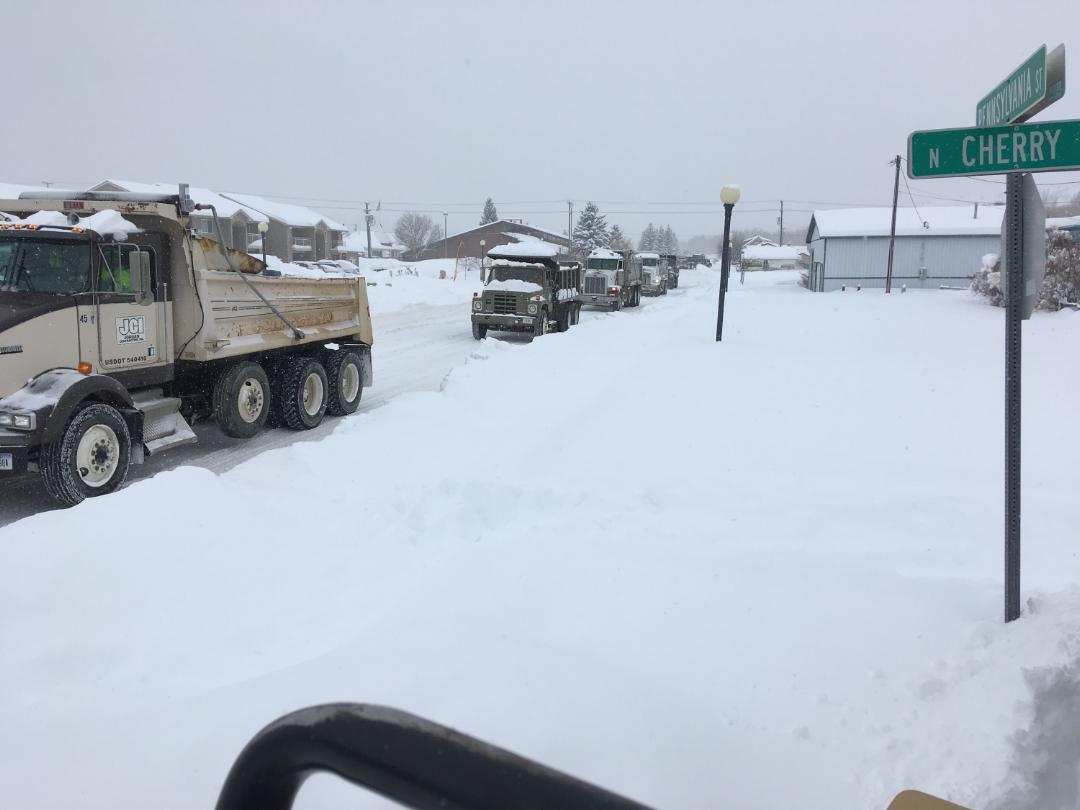 A fleet of dump trucks moves snow in Anaconda on Wednesday.

Bill Everett, ADLC chief executive, made the declaration at about 5 p.m. He said the county brought in four contractors, plus county crews, to plow the snow Wednesday morning and the cost to the county was $3,000 an hour.

"We're running out of resources," Everett said. "There's only so much emergency funding set aside. We'll be out of that very shortly."

Everett said the county and contractors had taken 1,000 truck loads of snow Wednesday.

"It just made a dimple" in the overall snow picture, Everett said.

The National Weather Service in Missoula reported 25 inches of snow had hit Anaconda as of late Wednesday morning, meaning the Smelter City has been hit harder than anywhere else in southwest Montana by the wave of snowstorms that have descended on the Treasure State this week.

The sheer weight of snow has been so heavy avalanches have been crashing into residents’ yards along 8th and Birch streets in Anaconda, according to Everett.

Though no one has been hurt, Everett said two such avalanches have come racing down from a steep hill that rises up behind the homes and crashing into residents’ backyards.

One occurred at about 11 a.m. Tuesday in the 500 block of 8th Street. Another avalanche reportedly slid into residents’ yards Wednesday morning in a nearby neighborhood along Birch Street.

But for all the snow counted in Anaconda, there could in fact be more on the ground than has been reported, according to Corby Dickerson, who oversees the official weather observers for the NWS Missoula office. Dickerson noted that official snow totals could change as more accurate reporting comes in and is analyzed, and some Anaconda residents have said that there's up to three feet of powder in the area. Everett said the snow is as high as his window sill, which is four feet high. He also said it's higher than his chain link fence.

The adverse weather is unrelenting for Anaconda.

Bruce Bauck, a National Weather Service meteorologist in Missoula, said Wednesday will bring another two to three inches in Anaconda and Thursday the Smelter City will see an inch or two more.

No snow is expected for Friday, but the respite will be brief. Over the weekend Anaconda can anticipate Arctic, frigid winds with highs in the single digits on both Saturday and Sunday and the lows dropping at night to 15 to 20 below zero.

Everett says drifting, blowing snow is a concern because it will be harder for the county to keep up with clearing roads. He said the forecast does not leave him optimistic over the Smelter City's ability to contend with the snow.

Jim Pesanti, maintenance supervisor for the Montana Department of Transportation, said the state has every snow plow in operation right now. But he is looking into providing more dump trucks to the county so snow can be picked up and taken off the streets.

Delila Bruno, administrator for Disaster and Emergency Services, said Wednesday evening that snow removal is not usually one of the things the state provides funding for.

Gov. Steve Bullock declared a state of emergency for the state itself earlier Wednesday in order to help keep the supply of heating fuel delivered to residents amid massive snowfall and frigid temperatures affecting the state.

Despite the financial hardship, the county and the contractors will be back out on the streets Thursday to keep plowing.

Mill Creek Highway remains open, but Everett said the decision about whether to close it could change from “moment to moment.” The county has dedicated two full-time employees to keeping that road clear. He said the county has considerable ground to cover because employees serve the entire county, which includes the Racetrack area north of the town and the Big Hole River to the south.

The snow has accumulated so much that a group of 16-to-21 year olds from the Anaconda Job Corps, which trains young people for work, rallied at noon Wednesday to start digging out fire hydrants.

If there is a fire emergency, firefighters cannot get to the hydrants because they are all buried under roughly seven feet of snow, said Everett. He said the county has 240 hydrants that need to be dug out. Everett said the young people made progress on digging out fire hydrants and also dug out vehicles that had become submerged under snow pushed off the streets by snow plows. Everett said the young people will be back out on Thursday with their shovels.

Bill Sather, assistant chief of police, said that snowplows have pushed snow out of the road at Main and Sixth streets, creating a 30-foot wall of snow. The county created four snow fields on county land where the dump trucks deposited the snow.

Everett said a lot of businesses continue to be closed due to the unrelenting weather. He said the county is planning to spend emergency tax increment financing money to remove snow from the parking areas along Park and Commercial streets. The specially designated pot collects taxes from businesses to attract more business and industry to certain areas.

“You can’t develop business if you can’t open,” Everett said.

That project got underway Wednesday and will continue Thursday.

“We’ve got anyone who’s legal to drive a piece of equipment out here,” Everett said.

He said firefighters helped out Wednesday by driving smaller snow plows and they will be back with that equipment Thursday. It’s been an all-hands-on-deck snow removal project.

Everett said the problem is not going to be fixed within the next 48 hours.

The police department is still taking calls at 406-563-5241. Police officers delivered groceries, prescriptions, took residents to the hospital or to doctor appointments on Tuesday and will continue to do so, Everett said. Officers also brought at least a dozen meals to residents who were shut in and couldn’t get meals.

So far, there have been no emergency situations for residents. But Everett said residents should still be checking in on neighbors, friends and family to make sure everyone remains safe.

Classes or no classes?

Snow continued to fall Thursday in Butte and southwest Montana, adding to an overwhelming amount of powder that has already led to school clos…

Young people from the Anaconda Job Corps work Wednesday to dig out fire hydrants from around seven feet of snow. Anaconda has been the hardest hit in southwest Montana from the relentless snow that has fallen this week.

A fleet of dump trucks moves snow in Anaconda on Wednesday.