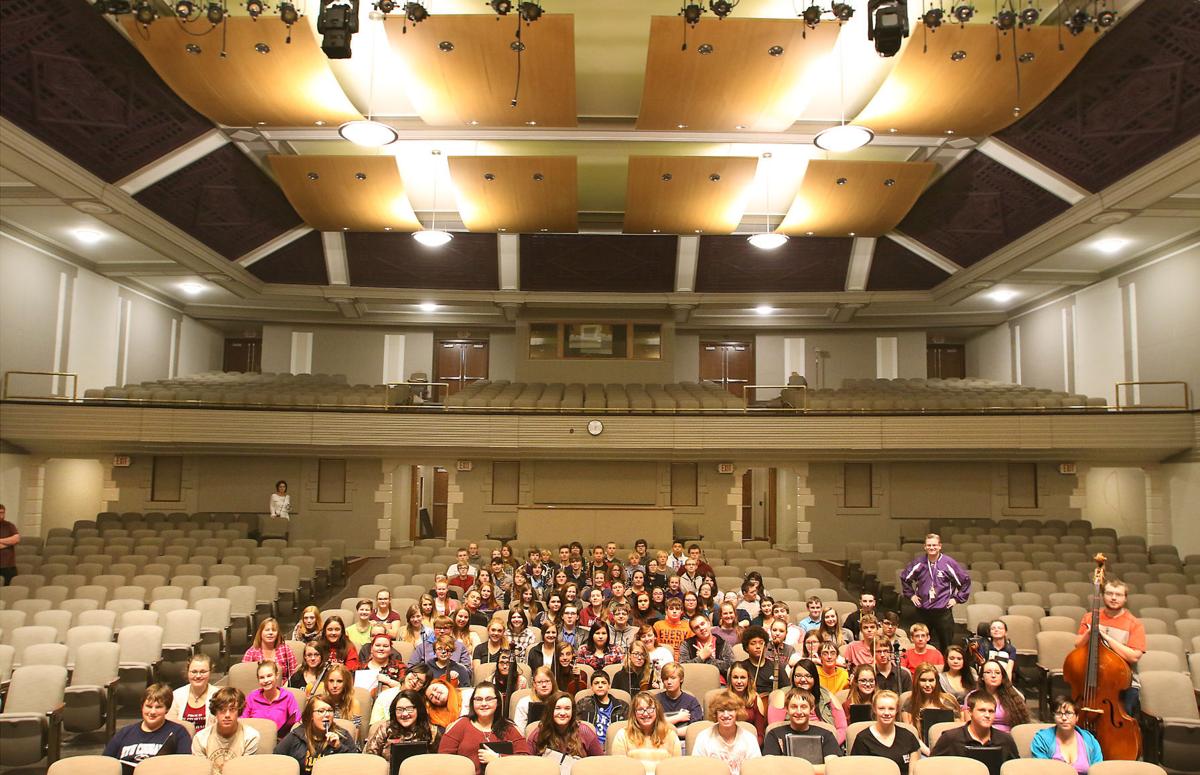 Butte High School orchestra, band, choir, and drama clubs are the first students to sit in the newly remodeled auditorium in this photograph taken Thursday. 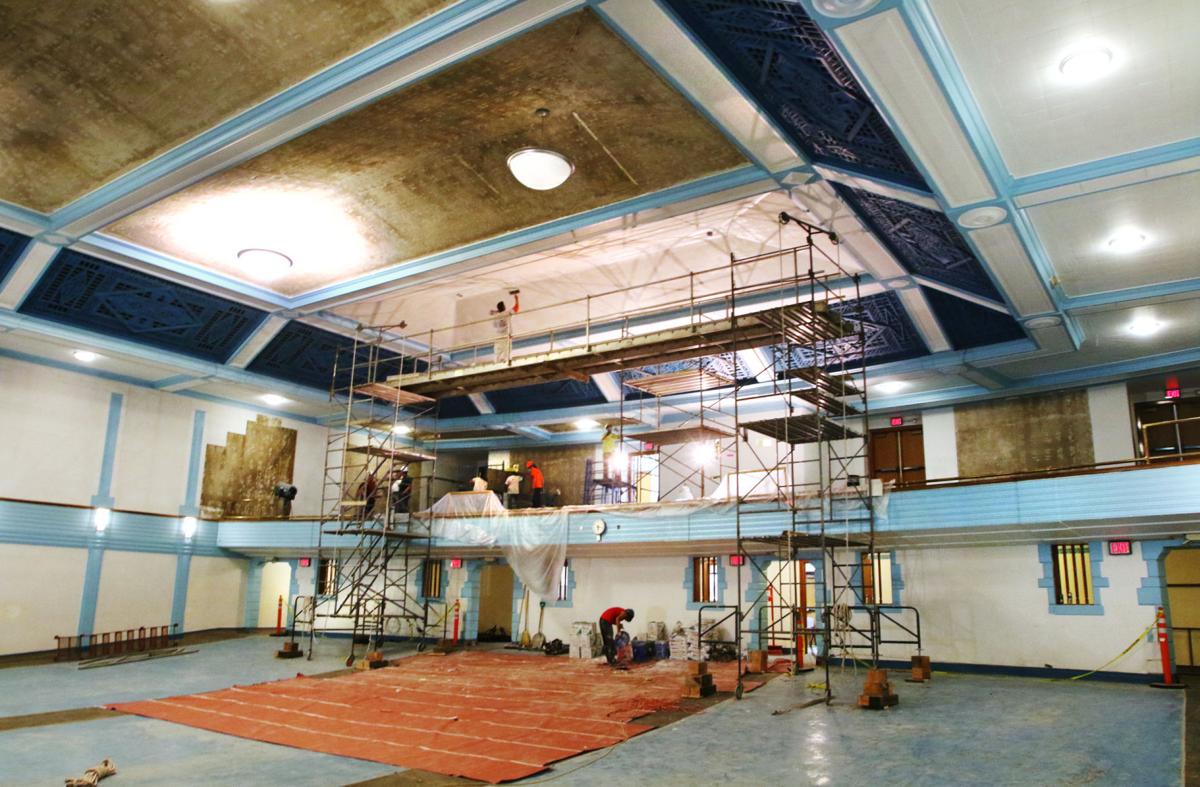 In this photo taken last summer, reconstruction on the auditorium has started.

For two happy alumni, the $2.2-million renovation of the Butte High School auditorium sheds a whole new light on the historical space.

Architects and school officials ensured that the 1930s architectural integrity would not be lost in the transformation from outdated to modern.

They stayed true to their word.

Immediately upon entering the back of the theater, a visitor senses an entirely new space that belies the previous 1938 Art Deco style that had overstayed its welcome. The auditorium was built at the same time as the entire original building.

Warm grays, cream, and a deep purple meet the senses where once was an old-fashioned blue tint that practically bordered on hokey tiki-bar turquoise.

"The existing blue paint scheme was something that needed to be reworked, very badly," said Butte High alum Jason Davis of SMA Architects of Helena.

SMA Architects repurposed the side panels, or stanchions, from the old seats to stay true to Butte's bent for salvaging and showcasing its grand architectural past. The historic wooden armrests were stained and reinstalled in the new seats, plus every other seat sports a desk.

"We were really excited to rehab these parts of the existing seats, as it is a direct connection to the 1930s building," said Davis. "Imagine how many people sat in those seats over the years. I think it's very exciting to continue to have these pieces a part of the next chapter of the auditorium."

Davis and colleague Becky Lawson know well those old, musty seats: they are Butte High graduates who seemed excited to see their alma mater undergo such a transformation.

"I was in band, so we were in there all the time," said Lawson, a 2004 graduate. "It's really incredible to turn a space that you've used when you were in high school to a modern use and function. The ability to walk out on a new stage that's been updated is really incredible."

"We worked very hard to keep the historic fabric of the space intact," he said. "We did very little work to the ornate Art Deco-style plaster work — other than repainting the space with more appropriate colors to Butte High School and the 1930s — bringing out plaster details that had been lost in the blue-and-white paint scheme."

The $2.2-million price tag for Bentley Construction is over and above the original estimated $1.9 million Butte school board trustees approved last May.

"As we've gotten into it, costs have increased," said Dennis Clague, district business director. Asbestos in the attic and electrical costs are among the causes for the increased expenses, he said. The high school building reserve fund pays for the project.

Trustees approved the use of first guaranteed maximum price, a flexible bid process in which changes or add-ons were automatically folded into the contract with SMA Architects, based on a 5-percent contingency on the original $1.9 million estimate trustees approved in May.

"This is a little different than a regular bid process," said Clague. "With the GMP, we don't have to take every change for approval to the school board."

On top of the $2.2 million price tag to the district is $143,777 approved to pay SMA Architects for its work, which included design and mechanical, electrical, structural, and acoustical engineering.

Before any of the old auditorium was demolished, the architects contracted with an engineering survey firm to laser scan the entire space from the inside out, using cutting-edge three-dimensional scanning technology.

The laser scans the room from multiple interior spots, creating a "point cloud" of information in 3D, said Davis.

"We import that point cloud into our program, and we essentially have a three-dimensional representation of the space that we can now measure and create our final building model from," he said. Photographs projected into the scan provide a visual reference of the space.

In a futuristic "Star Trek" sort of way, the technology makes their job easier.

"It is extremely accurate to within fractions of an inch," Davis said. "And it is much more accurate than our team attempting to measure the space with traditional methods."

Historic projects, he said, lend themselves to such a scan.

"This was a perfect project, because it was essentially one large, open volume," he added.

Offsetting the spirit of maintaining Butte architectural integrity are state-of-the-art sound and lighting systems that create a much different auditorium.

Acoustic "ceiling clouds" draped within the existing coffered ceiling allow sound from the stage to bounce back down to the audience.

"These clouds are suspended from the ceiling, so they very lightly 'touch' the historic building and leave the underlying historic space intact," said Davis.

A new skim coat of plaster and new sound absorption panels on the side and rear walls make for a compatible and flexible space for all kinds of events.

Designers emulated details from historic photos of the building to stay true to light fixtures, paint colors, and the overall feel of the auditorium.

"Although the vast majority of the photos were in black and white, we had a few very nice shots right after the school opened," Davis said. "They made clear the original architectural design intent. We worked very hard to honor that original version."

Electronic hoists and lifts modernize the stage, still awaiting its new purple curtain, a 60-by-24-foot behemoth that will showcase BHS in silver embroidery and a valance.

Gone are the old hand-pull rigging systems, said Lawson. Most of the ropes were tied off because they hadn't been used for years.

"The new system has a lot of presets in it, so you can just press a button, and when the stage rigging is set up for orchestra, band, or choir, whatever, it will just move into place," she said. "That way, we don't have to individually control things. So it's designed to be very user-friendly."

"And it's much safer than weights and pulleys," added Davis at a school board meeting when the architects presented trustees their plans.

Various stage backdrops suiting a concert, a play, a musical, or a speech will be handy to set up at the push of a button.

"The existing stage rigging, sound, and lights had remained for many decades and were very badly outdated," said Davis.

Renovators spruced up the front of the stage with new wood finishes.

"We were able to incorporate a bit of copper accents into the front of the stage — a nod to the Richest Hill on Earth," he added.

Superintendent Judy Jonart said the auditorium makeover is close to her heart.

"This is really a cool project," she said last summer when the place was torn apart and visitors had to wear hard hats. "This is my baby."

While the first two events are scheduled in the auditorium this week, district officials are in the midst of scheduling holiday programs, drama club performances, and other school happenings.

"The auditorium, which will be available to rent to the general community, will help the district focus on arts," said Jonart. She suggests it could be used for summer Montana Folk Festival performances or for any multi-use purpose.

At any rate, any club or individual can rent the auditorium.

"I think it's absolutely beautiful. It's been a labor of love on my part, and it will add a lot to that whole facility," Jonart added. "I think people will be surprised."

"It is way better," said the senior, who took driver's education classes in the old auditorium. She sat in the front row with the choir, band, orchestra, and drama classes for a historical first-time photo last week.

"I'm happy it's not that weird blue anymore," Beck said. "And I like the lighting and the new sound board."

Davis was over the moon that he was able to work on the project. He harkens back to his high school days, when Butte High played a role in his eventual career.

"It was an unbelievable honor for me, personally, as a Butte High alum, to lead the design team," he added.

While unexpected challenges normal to renovating an older building popped up, Davis said the result reflects respect and pride in the tradespeople's concern for preserving the auditorium's history:

"This project really is a great example of the can-do attitude that is very much alive and well within the Butte community."

Thursday, Nov. 3,  4 to 7 p.m. – School officials will hold an open house for the public to get a good look at the spiffed-up auditorium.

For the first time in a few years, Butte High School has a drama club again.

Butte High School orchestra, band, choir, and drama clubs are the first students to sit in the newly remodeled auditorium in this photograph taken Thursday.

In this photo taken last summer, reconstruction on the auditorium has started. 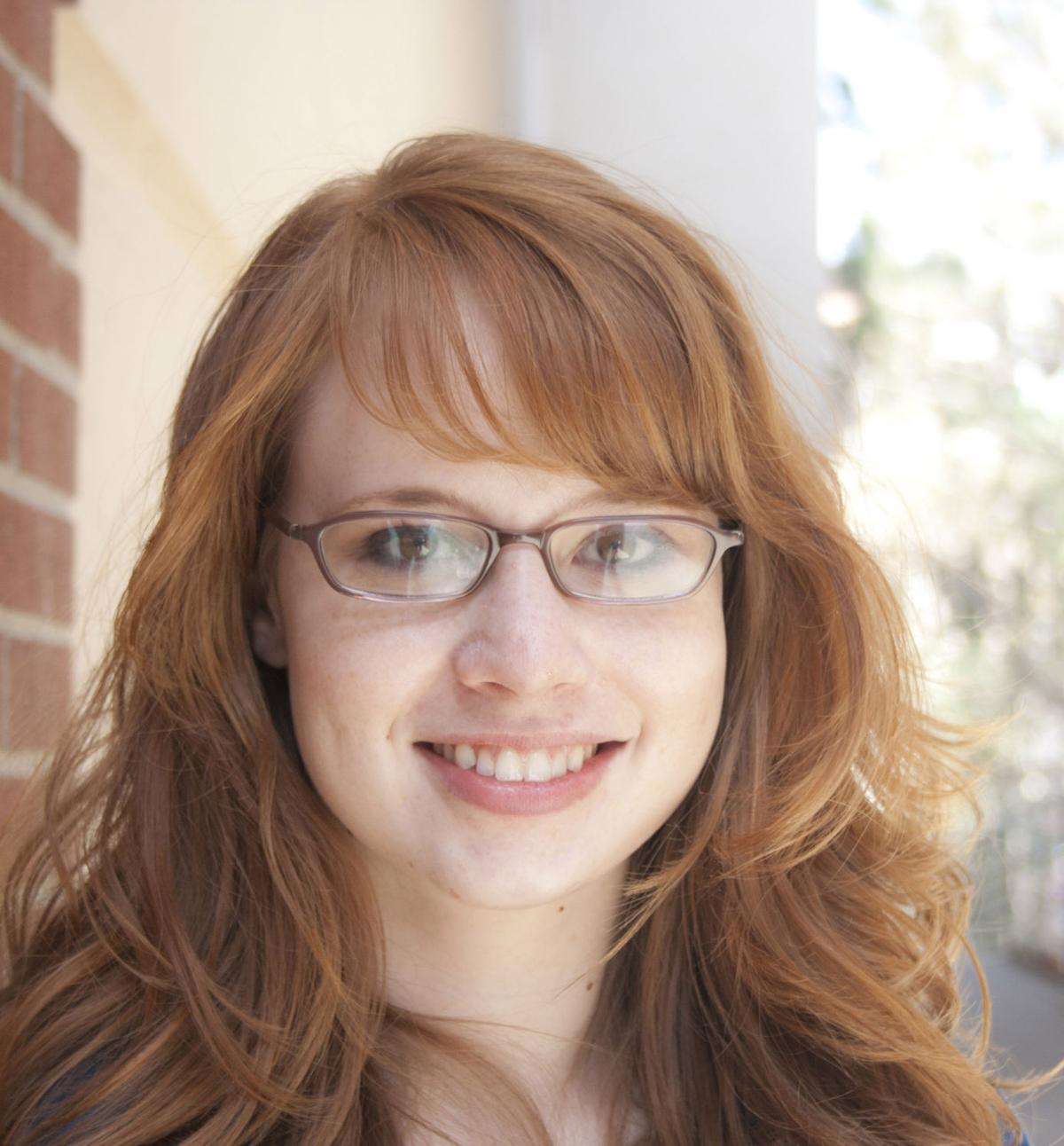 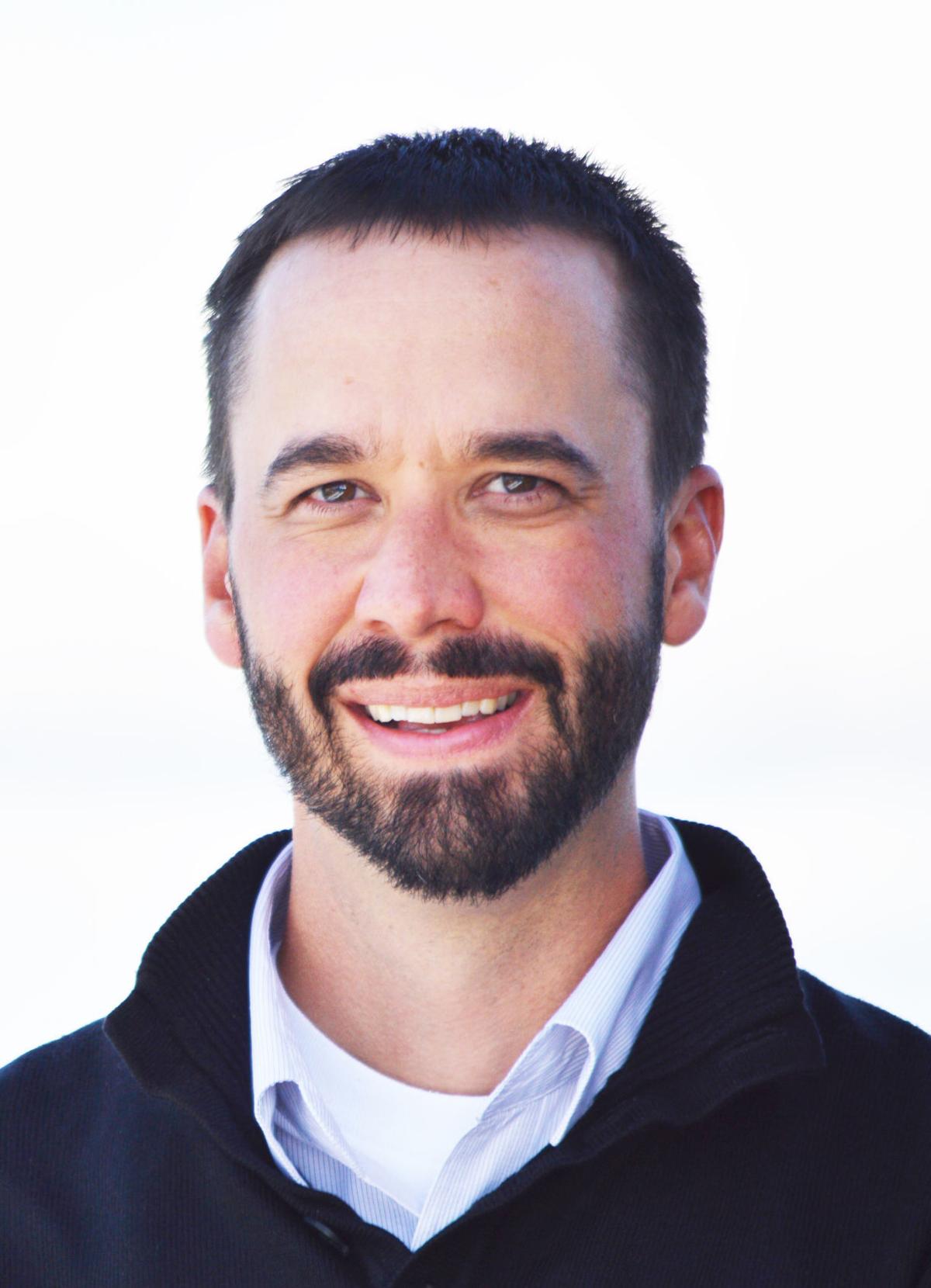 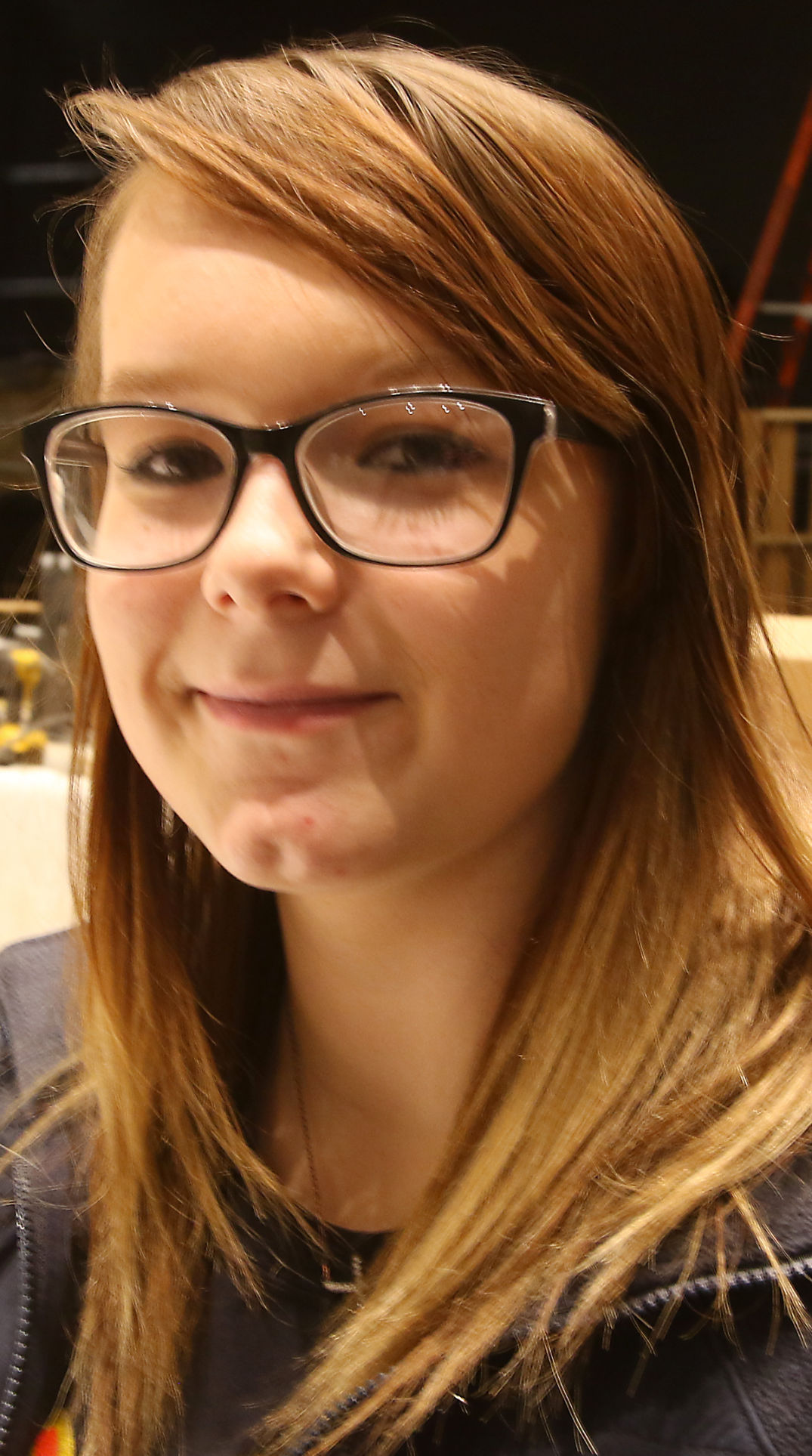 Senior Jessica Beck took driver's education classes in the old auditorium. She was among a group of students who sat in the newly renovated auditorium for the first time on Thursday.