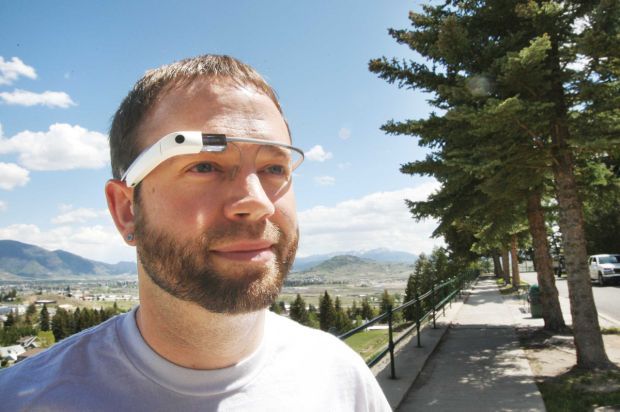 Nick Hawthorne, an assistant professor in the Technical Communications program at Montana Tech, demonstrates Google Glass, a wearable computer with an optical head-mounted display. Hawthorne is a Google Glass “explorer,” testing the prototype model of the new technology. - Photo by Walter Hinick, The Montana Standard 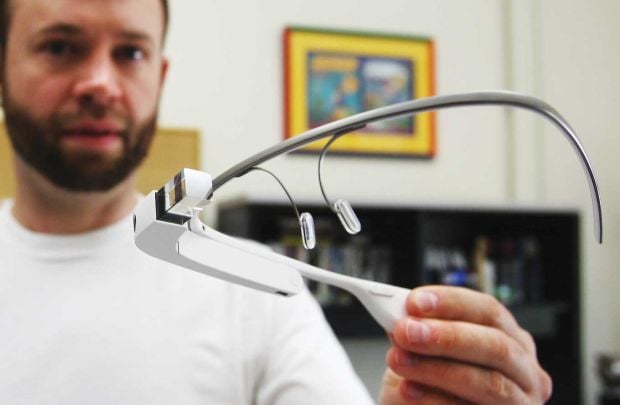 Hawthorne holds an example of Google Glass. He is developing an app for fly fishermen in southwest Montana that will tell them the best flies to use at certain times of year, stream flows and water temperature. - Photo by Walter Hinick, The Montana Standard

On a sunny day last week at Montana Tech, Nick Hawthorne posed for a picture outside. Two students walked by, and as they passed one said, “Wow! He’s got Google Glass!”

Hawthorne, an assistant professor, is a Google Glass tester. He’s using the Glass to research it as a form of communication, and also to develop an app for people who enjoy fly fishing.

Google Glass is a wearable computer with an optical head-mounted display; basically, it’s a hands-free smart phone. It responds to voice commands and the wearer’s blinks, as well as by swiping the side of the Glass with a finger.

Some might be skeptical at the practicality of Google Glass, especially at its price: $1,500. But Hawthorne says it has some interesting uses, even if it does look like something from Star Trek.

He noted that firefighters in New York City are using Glass to call up building plans so they know exactly where to go in a structure that’s on fire, and so they don’t miss any rooms. Glass can call up restaurant reviews while a person stands in front of the restaurant. Doctors can record surgeries to teach budding surgeons the trade.

In short, Glass allows a person to see through the eyes of another.

“The idea is to have it be less invasive and hands-free,” said Hawthorne, who teaches in Tech’s Technical Communications department. “It has its limitations, but this is bleeding-edge technology, which is different from cutting-edge technology. With great technology comes great responsibility.”

Hawthorne said there’s been a concern that Google Glass wearers are constantly recording, but it’s not true. He said the Glass battery lasts less than an hour when recording. But call up the photography option and blink your eye, and there’s a picture.

Google Glass is also “Bluetooth tethered,” which means it requires a cell phone nearby to connect to. Glass instantly uploads to the Cloud, unlike a smart phone or a GoPro camera. It’s not perfect, though, and Hawthorne gives regular pointers to the “Google Glass explorer community,” where testers like himself make suggestions to Google on how to better the product.

Hawthorne is creating an app, with the help of Scott Fleener, a computer science major at Tech, he hopes to submit to Google for use on all Google Glass devices. With a seed grant from Tech, the app will, using a Glass wearer’s GPS location, be able to give fishermen details on nearby rivers in southwest Montana.

“Based on the time of year, it’ll tell you the top five bugs, show your pick of flies,” he said. “You’ll get water temperature and stream flow.”

Hawthorne, an avid fly-fisherman, hopes the app also helps reduce “grip-and-grin catch-and-kill,” with fisherman. While a fisherman holds up the huge trout he just landed, waiting for his buddy to fumble for the camera and take the picture, each of those seconds the fish is out of the water reduces the likelihood it will survive once released.

Hawthorne cited an Alaskan fisherman and angling guide who notes that fish held out of the water for longer than 30 seconds have a 62 percent survival rate. For fish out of the water for a minute, the chance they’ll survive to the following day is less than 30 percent.

Google Glass can be used, Hawthorne hopes, to snap a picture of the fish held up in front of the wearer. Blink an eye, and release the fish immediately. Sure, the wearer isn’t in the photo, but the trout is recorded for later fish tales.

Hawthorne’s fly-fishing app is one of many “augmented reality” apps becoming available for Google Glass. A person’s reality is added to by additional information available in the device’s projector.

“I’m going for user experience with this thing,” Hawthorne said. “They can see what it’s like to fish from a boat in beautiful countryside. You’re really seeing it how it is.”

Hawthorne says part of his job is to keep on top of new ways to communicate, even with prototype technology.

“I teach the visual side of technical communications,” he said. “Because that field is ever-changing, we need to keep on top of this new technology. First it was the Pony Express, then telephones, then Face Time. Now it’s Google Glass.”

Nick Hawthorne, an assistant professor in the Technical Communications program at Montana Tech, demonstrates Google Glass, a wearable computer with an optical head-mounted display. Hawthorne is a Google Glass “explorer,” testing the prototype model of the new technology. - Photo by Walter Hinick, The Montana Standard

Hawthorne holds an example of Google Glass. He is developing an app for fly fishermen in southwest Montana that will tell them the best flies to use at certain times of year, stream flows and water temperature. - Photo by Walter Hinick, The Montana Standard