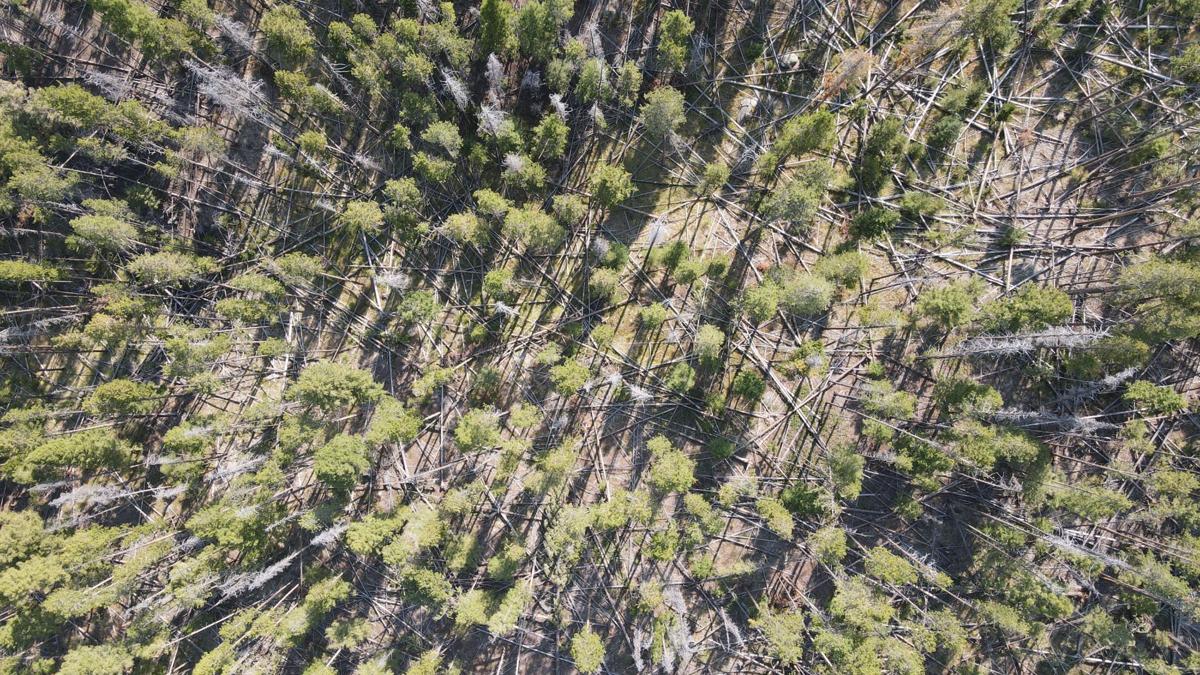 This aerial photo above forests surrounding Butte's Basin Creek reservoirs shows the devastation mountain pine beetles left in their wake years ago. Officials are worried more than ever about possible wildfires in the area. 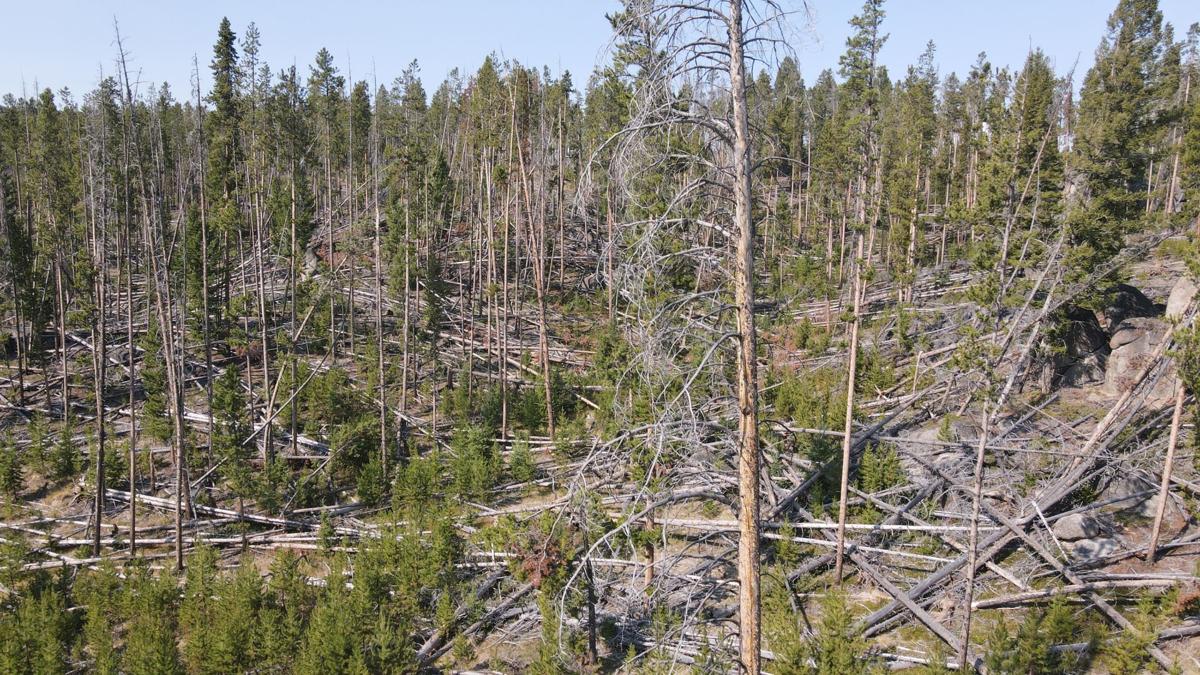 For more than a century, Butte — even with all its mining and the pollution it left behind — has had some of the best drinking water in all of Montana.

The pristine water comes from Basin Creek Reservoir, and to keep it that way, Butte-Silver Bow built a high-tech, $30 million plant nearby. Millions of gallons of water flow through its pipes and processes each day on their way to faucets in town.

The water is still pristine, and the treatment plant and system is so efficient and economical that it has provided nearly 60 percent of Butte’s potable water supply since coming online.

The treatment plant also allowed the county to open up the lower Basin Creek Reservoir to fishing and hiking and picnicking this past summer. Camping and campfires were not allowed, but it was open during day hours.

The public access only lasted four weeks, cut short in early July by drought and wildfire danger. There had long been concerns about wildfires at Basin Creek and what they could do to Butte’s water supply, especially given all the deadwood that mountain pine beetles left in their wake a decade ago.

But the concerns hit new heights this summer, and really hit home in late September, when a wildfire broke out just east of Homestake Pass. Quick action by firefighters, with help from a tanker aircraft and a couple of helicopters, kept it from spreading far. But as fires go, it wasn’t all that far from the reservoirs at the base of the Highlands.

But it was a call to action.

Until recently, Gallagher said he had not been up the upper reservoir, a smaller body of water more than a mile upstream that connects to the lower reservoir via Basin Creek.

“I hadn’t taken a trip up there,” Gallagher said. “The lodgepoles that are just laying down — it’s just a tinderbox ready to go up. It’s not a matter of if we’ll have a fire. It’s a matter of when we have a fire with that many fuels there.”

Big efforts are now being launched to clear deadwood from the Basin Creek watershed, including small county-owned portions that hug the reservoirs and the thousands of acres overseen by the U.S. Forest Service.

It could be a multi-year project, and unless the area gets a very, very wet spring and summer, Gallagher said the four weeks of public access this year will probably be the last for a long time. The treatment plant made that access possible.

“I think the possibilities of keeping that open until we take care of this fuel situation is slim,” he said. “The ultimate goal is we get back to that, but if somebody went up there and had a little fire while fishing and it sparked, it would be devastating to the local potable water system.”

Butte-Silver Bow has worked with the Forest Service and the Montana Department of Natural Resources this year on reducing fuels, and county crews removed some dead timber this spring from county land. It was hauled to a nearby area and people were allowed to collect it for firewood.

“We’ve recognized the problem for a while but I think the recent fires certainly intensified everybody’s interest in trying to get something done up there to prevent a catastrophic wildfire,” Keenan said.

The Basin Creek reservoirs were created in the late 1890s to serve as one of Butte’s primary sources of drinking water, and they remain that to this day.

Even following more stringent federal requirements in the late 1980s and early 1990s under the Safe Drinking Water Act, Basin Creek was granted a waiver that allowed its water to go unfiltered. A little chlorine was added before gravity carried it into town, but that was it.

In 2011, the water exceeded levels of acceptable disinfection byproducts. For about six months, the water contained high levels of organic carbons that produced possible carcinogens when treated with chlorine.

Based on data, sampling and other analysis, water officials believe pine beetles had ravaged trees in the watershed, leaving additional organic matter on the forest floor that washed into the reservoir and changed the water’s character. There was a heavy spring runoff that year, too.

Organic carbons soon returned to acceptable levels, and have fluctuated over the years since, but the federal filtration waiver was revoked a decade ago, meaning the water had to be treated. That’s why the treatment plant was built.

It has worked great, county officials say, but fire could lead to big problems.

“If a large wildfire were to occur, the Basin Creek watershed slopes and hillsides could be made unstable and fill reservoirs and choke intakes with ash and sediment mobilized by subsequent storms and snowpack runoff,” Keenan says in a recent video the county produced about the dangers.

The video was played for commissioners this week and is included on The Montana Standard’s online version of this story.

Keenan told the Standard this week that clogged intakes and pipes weren’t the only potential problem.

“We’re also concerned about the treatability of water,” he said. “The Basin Creek plant is very high-tech and very sophisticated, but it’s built to take advantage of the gravity flow of water through the treatment process, so there’s not a lot of pre-treatment in this plant.

“It’s made to treat a pretty pristine water supply,” he said, so anything changing that would be a challenge.

The challenge ahead is big and it could be costly, but, Gallagher says, “We’re not going to have to re-invent the wheel.”

That’s because Helena faced a similar situation with the Chessman Reservoir and Tenmile Creek watershed that are the main sources of that city’s drinking water. Beetles ravaged forests in that area, too, increasing wildfire threats to the reservoir and a five-mile flume that transports the water.

With help from federal grants and cooperation from the Forest Service, private landowners and others, deadwood was cleared to create buffers around the reservoir and along the flume, greatly reducing the wildfire threat.

Because aspects of the beetle kill, reservoir and land oversight were similar, Gallagher, Keenan, Dennehy and others from Butte-Silver Bow met with Forest Service and Helena officials up there last week.

“We are fortunate enough to be able to piggyback on what they’ve done,” Gallagher said.

“I think there may be a bigger project up there to kind of expand on what they’ve already done, but they’ve done a lot of good work up there for sure,” he said.

The clearing work done by county crews at Basin Creek last year was a start, Keenan said, but was only a small part of what’s needed. The Basin Creek watershed is 7,700 acres, most of it overseen by the Forest Service, so coordination with that agency is needed.

The goal is to clear deadwood from at least 40% of the watershed, and the project is likely to be done in stages with funding help from grants.

The county was just awarded a $50,000 grant so it can hire a hand-crew to do clearing on 16 acres of county land in the area, and it’s possible that work could be done before the new year.

Undertaking major fuel reduction, especially that involving Forest Service land, first requires an environmental analysis mandatory under federal law. The county is seeking a $100,000 federal grant to pay a consultant to do that. That could all take months.

The county is also applying for $265,000 in federal money that would go toward fuel-reduction efforts on 85 acres of B-SB property next to the main reservoir. The county would hire outside crews to do the work.

Gallagher said Tim Lahey, the Butte district ranger for the Beaverhead-Deer Lodge National Forest, is supporting the efforts and hopes everyone else will, too, including groups that pushed for public access to the reservoir.

“I think we’ve gotten the attention of all the parties,” Gallagher said. “Right now, I think it’s just a matter of getting the funding.”

Twelve students are candidates for royalty at the 2021 Butte High Senior Coronation on Wednesday, Nov. 24,  at the Copper King Inn.

Woo chose America and a man from Butte

Thieves can’t seem to keep their hands off of heavy-metal, decorative objects in Uptown Butte that were meant for the community.

A highly successful musical theater performer and opera singer, Olds has performed on the Broadway stage, as well as at Carnegie Hall and the Lincoln Center.

Butte Central High School’s Monogram dance is from 8 to 11 p.m. Wednesday, Nov. 24, at the Knights of Columbus.

The family of a former prosecution services bureau chief for the state Department of Justice has created an endowed scholarship fund in his honor to help a student at the University of Montana Alexander Blewett III School of Law.

What do we know about the Omicron variant?

This aerial photo above forests surrounding Butte's Basin Creek reservoirs shows the devastation mountain pine beetles left in their wake years ago. Officials are worried more than ever about possible wildfires in the area.