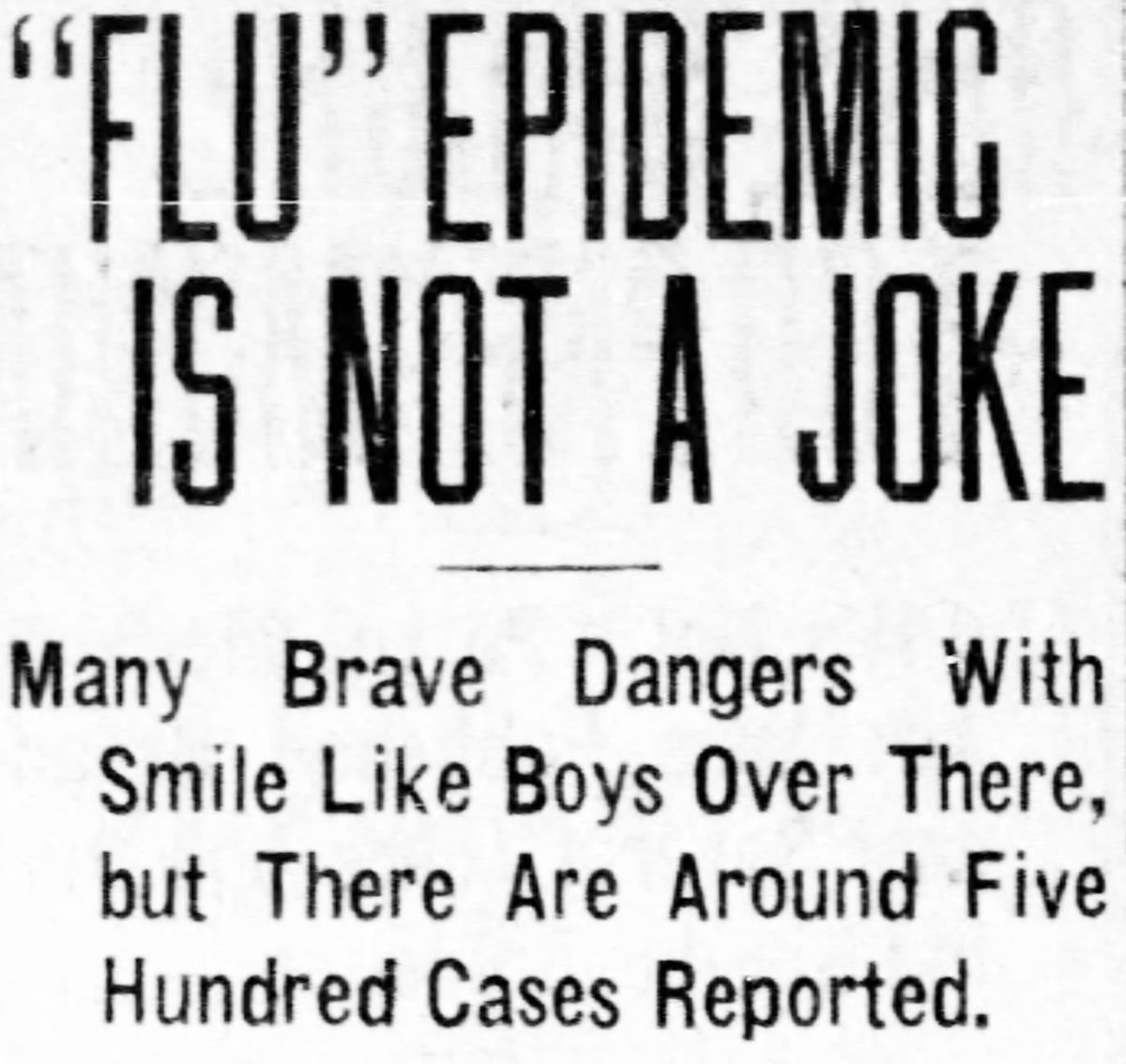 Flu Epidemic is Not a Joke

The Butte Health Board addressed Butte merchants in this advertisement. The ad included stringent rules business owners were to follow. 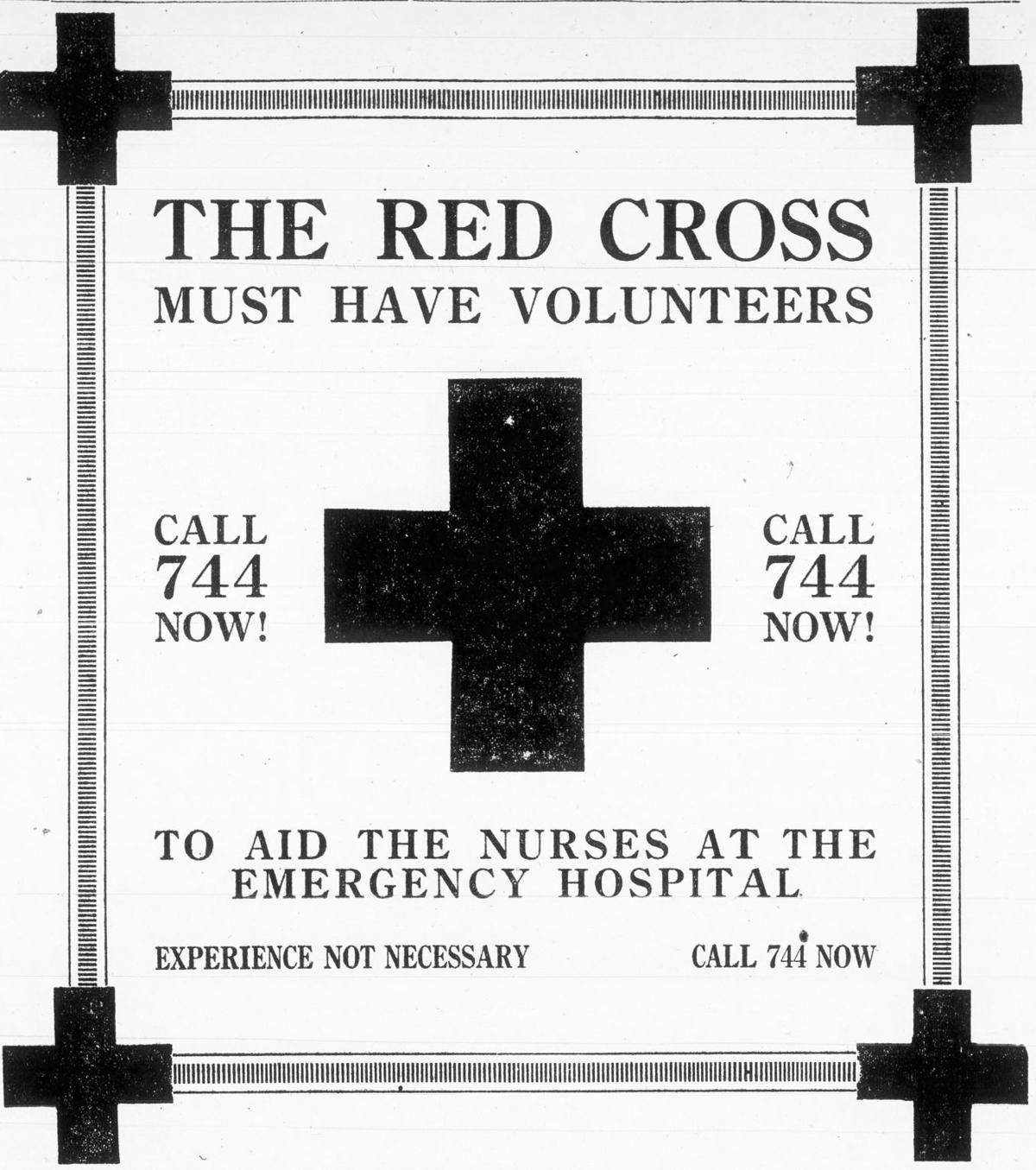 During the pandemic, volunteers were desperately needed.

There was an ongoing battle with the Butte Health Board to shut down all saloons. 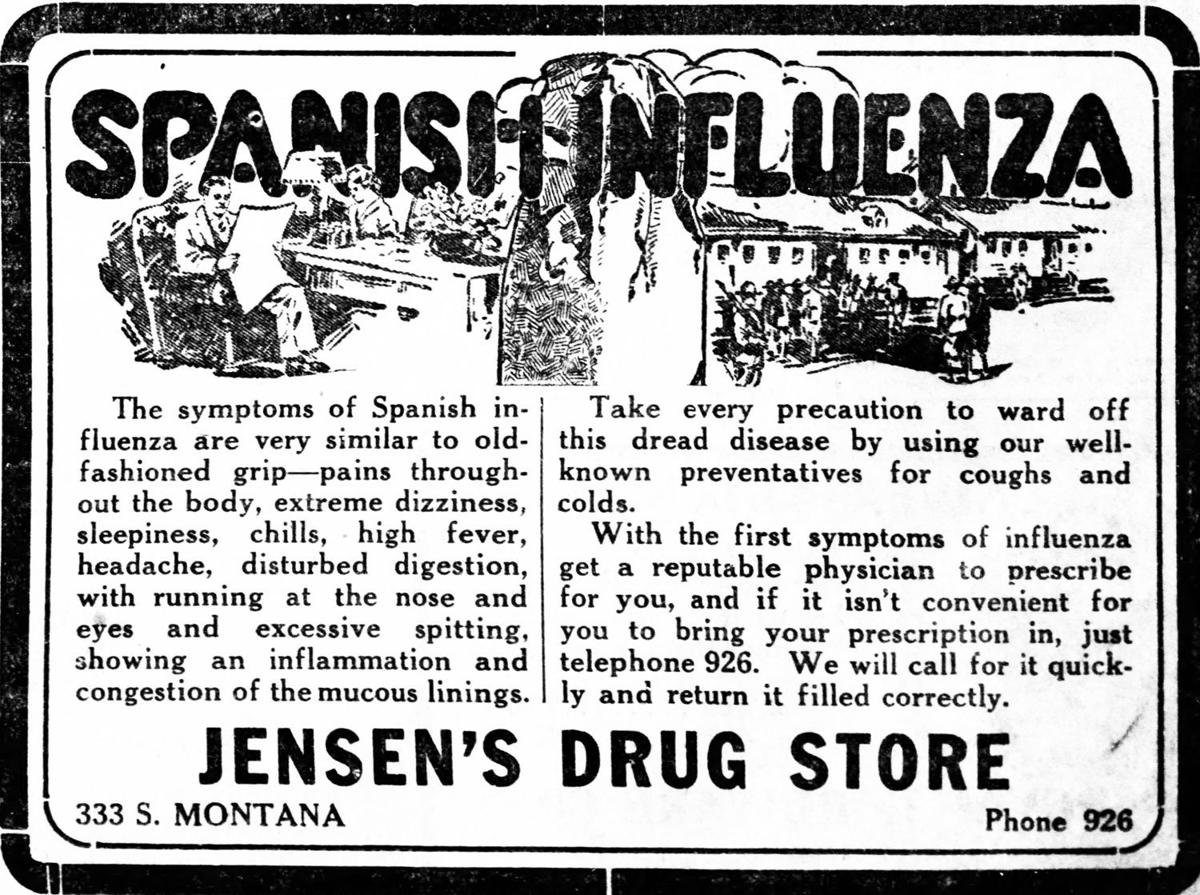 During the Spanish flu pandemic, Jensen's Drug Store would fill your prescription needs. 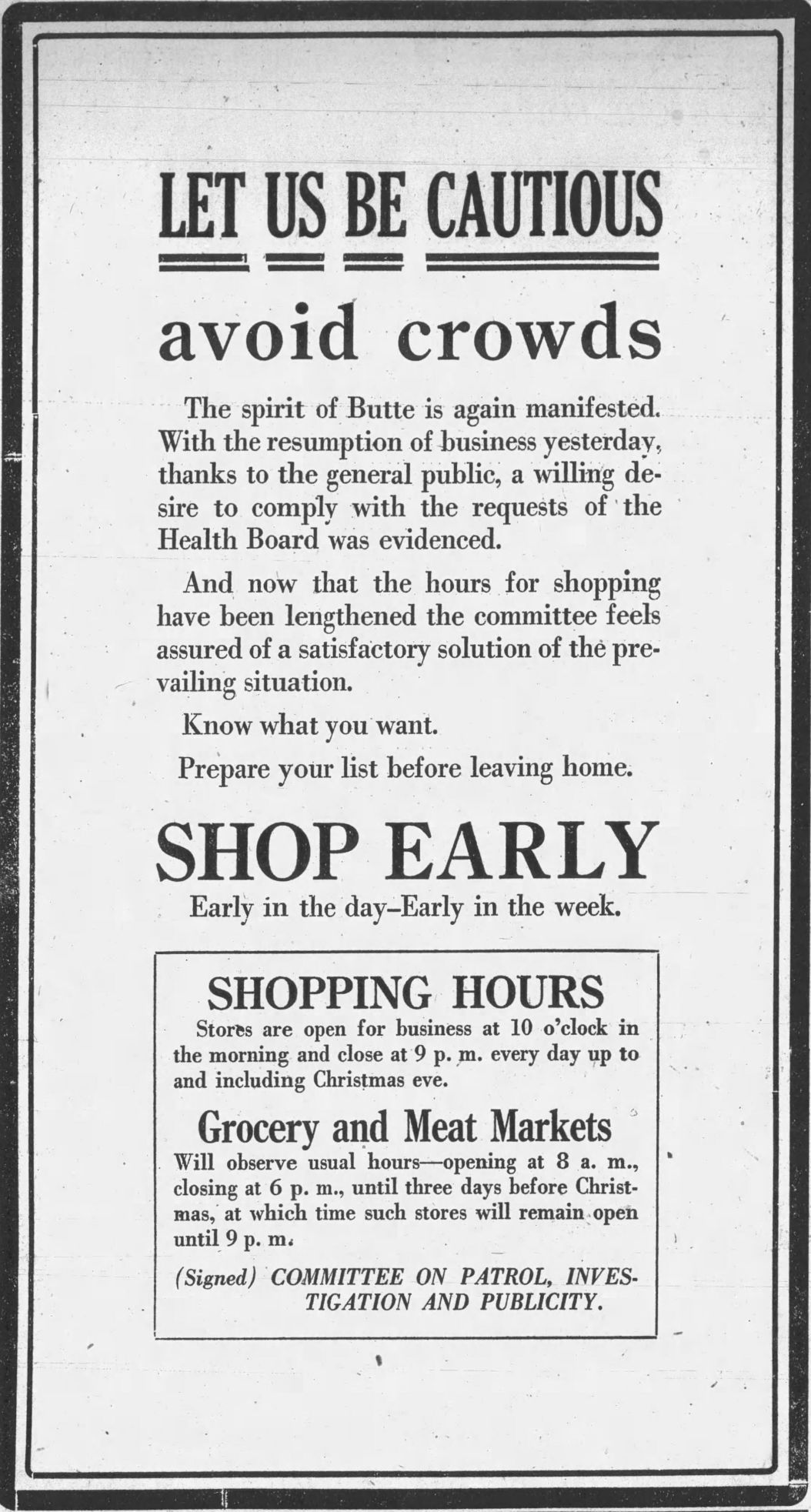 "Let Us Be Cautious" were the optimum words to residents out shopping. 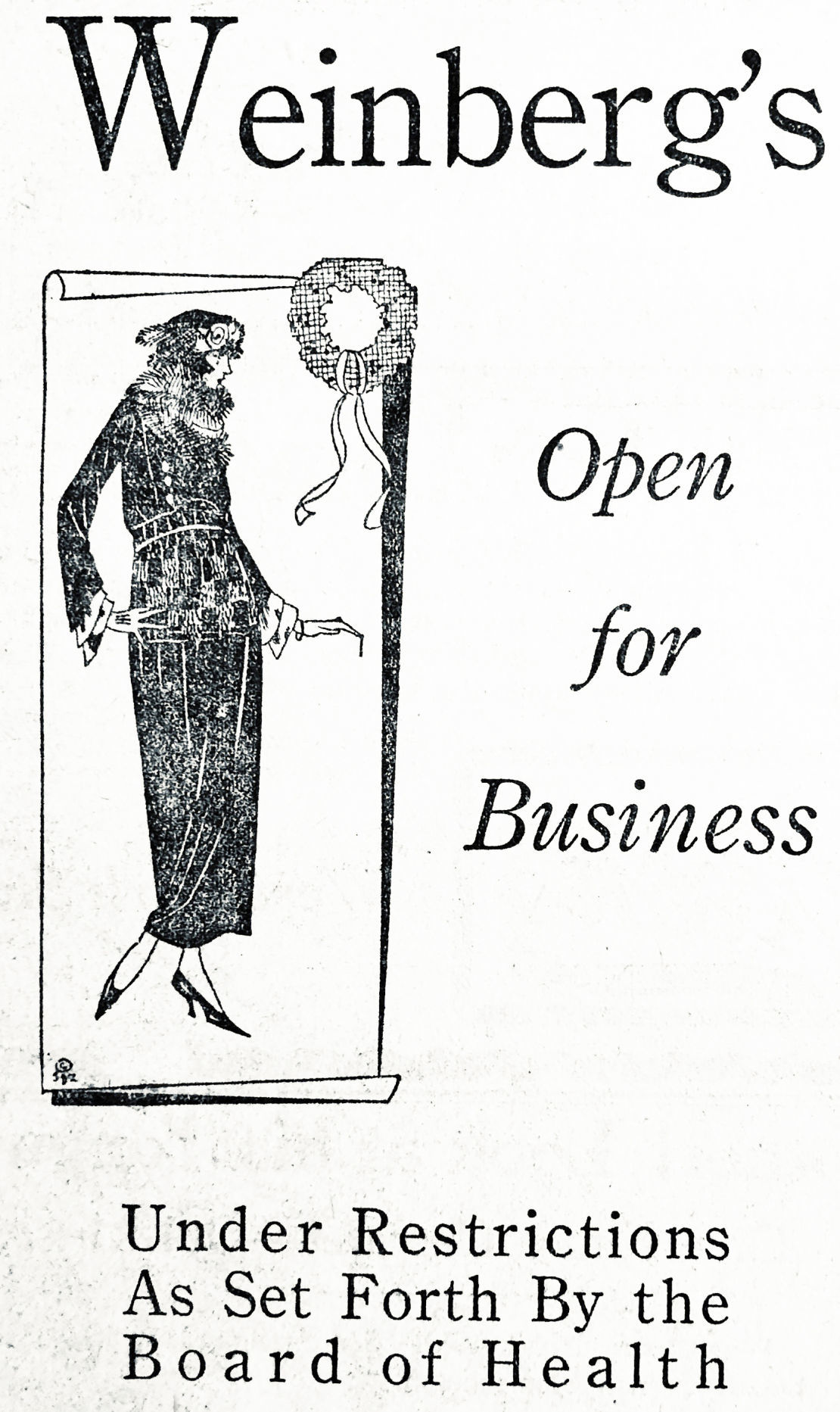 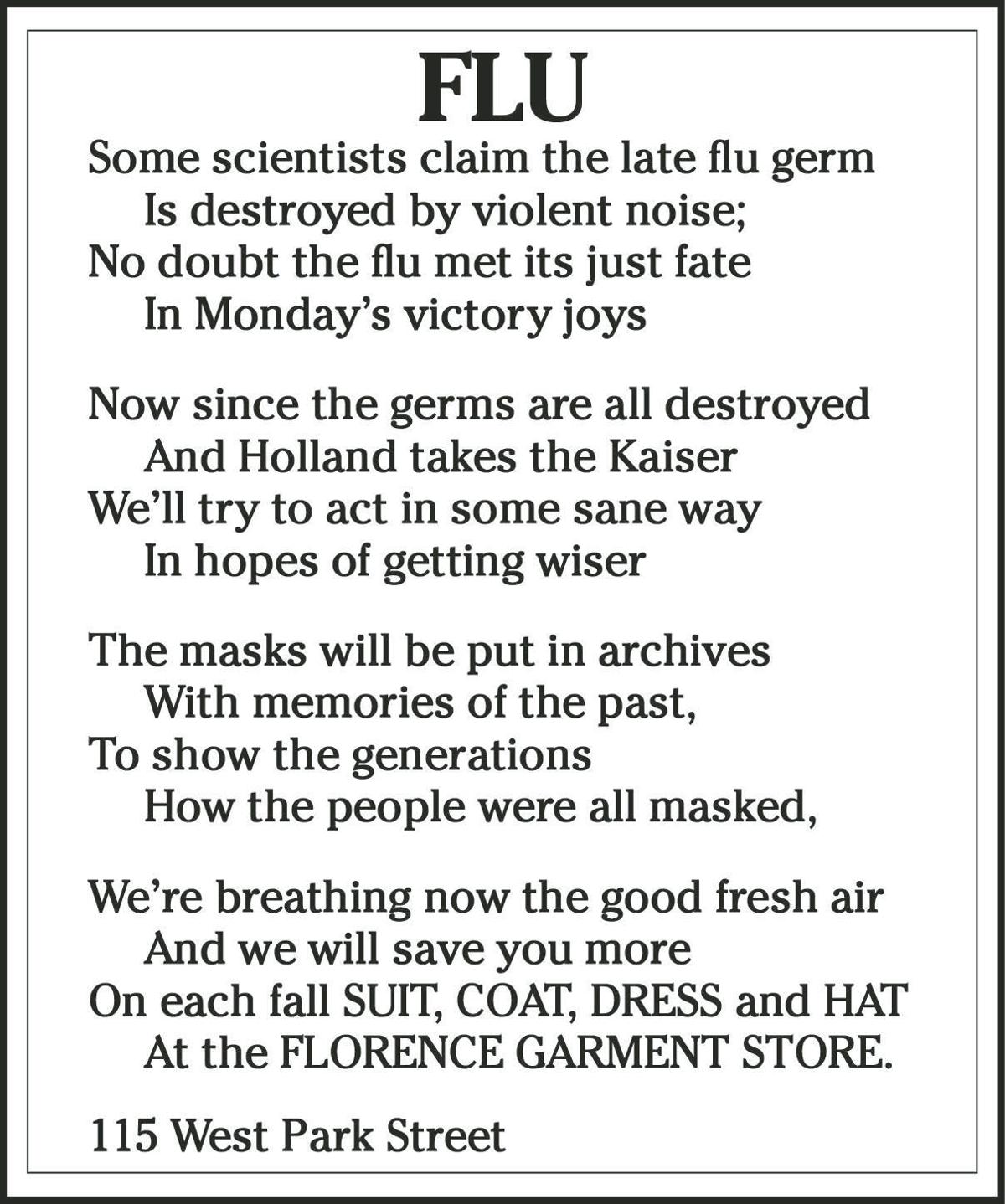 “I had a little bird

And its name was Enza

I opened the window

No one would dispute that we are living in uncertain times, but this is not the first pandemic of the modern era.

The Asian flu of 1957-58 took the lives of more than 1 million people worldwide. Since 1981, AIDS has claimed more than 35 million lives.

In the past 100-plus years, other pandemics have surfaced including polio, the swine flu, Ebola and the Zika virus.

The world is again faced with a pandemic, and just like the Spanish flu epidemic of 1918-20, the fear of the unknown seems to have taken center stage.

For the world’s inhabitants in 1918, first came defiance, quickly followed by disbelief.

Imagine waking up feeling like a million bucks but by nightfall finding yourself at death’s door.

In the waning months of 1918, that was the reality.

The world was still at war, but unfortunately, another war was rearing its ugly head in the form of a deadly virus. The Spanish flu spread like wildfire through Butte and across the globe.

It would infect nearly 40 percent of the world’s population. While the majority of its victims survived, millions did not, and it would become known as the “purple death.”

To say the death count was catastrophic would be an understatement.

The pandemic killed more U.S. soldiers than died on the battlefields of Europe. In Butte, more than 1,000 people perished. Worldwide, it has been estimated that more than 50 million people died in the pandemic. Some experts have even put the death count closer to 100 million.

In the United States, it is believed the virus was first diagnosed on March 11, 1918, at a Kansas military training camp for World War I soldiers. At the time it was not considered too aggressive. But by August, a stronger strain had emerged. The number of deaths began to mount. Soon, the mortality rates in major U.S. cities such as Philadelphia and San Francisco soared to astronomical numbers.

Mining City officials, however, were not worried. In fact, as late as Oct. 5 it was reported that the city, so far, had “escaped the ravages of Spanish flu.”

Butte’s luck would soon run out.

“The flu was pretty devastating,” said Ellen Crain, director the Butte Archives. “It took them awhile to realize that what they were dealing with was not normal respiratory issues.”

The Butte Health Board met for the first time on Oct. 9 and made some much needed but quick decisions. “Spanish flu is epidemic in Butte,” said Dr. Dan Donohue, “and drastic measures must be taken to prevent the spread of the disease.”

Crain noted the health department was unbelievably thorough. “They took their job seriously,” she said.

The board passed several unpopular measures, including the closing of schools, churches, theaters, and dance halls. A halt was put to all businesses such as Hennessy’s and Symon’s advertising any kind of sales. Officials did not want crowds of people anywhere.

Opposition to the school closures had come swiftly, but the Butte Health Board stood firm.

Next, sporting events were also canceled, as well as any Halloween activities.

“The health department met nearly on a daily basis,” explained Crain, “but it was still overwhelming for them.”

Local taverns remained open, but could only sell packaged liquor. That rule did not go over too well with Butte’s ministers, including the Rev. Charles Chapman, who wanted to give his sermons in the Atlantic Saloon. The reverend’s request was denied, but to placate the clerics, signs were placed in all Butte saloons stating “Please do not congregate in this place. Transact your business and keep moving.”

As the death toll rose, lengthy obituaries had become almost non-existent in Butte’s three daily newspapers. They simply did not have room. Instead, they were replaced with brief death notices, which numbered some days in the dozens.

As an example, in the Butte Miner of Oct. 22, 1918, there were no obituaries. There were, however, three-to-four line death notices reporting on the deaths of 56 residents.

Enforcing the new rules proved difficult as well. People were lax in following the new set of guidelines and police were reluctant to step in.

That did not surprise Crain, especially following the aftermath of the Granite Mountain-Speculator disaster. The June 8, 1917 fire took the lives of approximately 167 miners.

Some would find humor in the ongoing epidemic.

Before its doors were shut, the Rialto Theatre management tucked away their fears and brought “Mother Goose” to the stage to entertain the audience with this little tune:

The tuffet was covered with dew;

Along came a spider and sat down beside’r

And they both caught the Spanish flu”

The theater also took a well-aimed potshot at the Butte Health Board:

“Hark, hark, the dogs do bark,

The ‘flu’ is coming to town;

Until it goes – Said the hell-th board.”

The laughs would soon become few and far between. To illustrate how quickly this epidemic spread, between Oct. 16 and the morning of Oct. 19, 1918, 370 new cases of Spanish flu had been reported.

The flu hit every age group — young and old, male and female. Hardest hit though were men between the ages of 18 and 30.

Butte doctors reported that “often the heartiest people were the worst sufferers.” Therefore, medical personnel urged those afflicted to wrap themselves in heavy blankets, stop eating large meals, leave meat off the menu, take laxatives, and leave windows opened so those suffering could get some fresh air.

That didn’t help the Mueller brothers, Arthur, 39, and Walter, 36, owners of the Centennial Brewing Co., both of whom succumbed to the flu, along with Arthur’s wife, Kathryn, and her sister, Mary Herzig.

To show how it continually spread, John O’Meara, who was the Mueller’s general manager at the Centennial Brewing Co., died, along with his wife, Sarah and daughter, Sadie. Later, his son John Jr.’s bout with the Spanish flu would also prove fatal.

Lastly, the priest, Father Patrick Brosnan, who gave the last rites to most of the people mentioned above, died as well.

Large funerals were not allowed. Instead, only family and close friends could attend services. Influenza victims had to be buried within 24 hours with the head and face wrapped.

Other stringent rules were set in place:

In the waning days of October, the virus had killed more than 300 Butte people, and help was needed to accommodate those recovering from the virus. In addition, more nurses were needed and numerous newspaper advertisements were placed.

Stepping up to the plate was James Finlen, proprietor of the Hotel Finlen. The businessman offered to turn over his establishment to accommodate the sick. Finlen’s gesture was more than generous, but officials opted to turn the Washington School into a makeshift hospital.

While death from the Spanish flu remained a daily occurrence, officials felt that by Nov. 8, it had just about run its course and lifted most of the bans. To be on the safe side, schools would remain closed for another 10 days.

Three days later, World War I had come to an end and Butte residents were in a celebratory mood. They took to the streets in droves and for many, it would be a fatal mistake.

The flu came back with a vengeance and every establishment that was given the green light to open had to again shut its doors.

In the first couple months of 1919, Spanish flu deaths had dropped dramatically. The world was not quite out of the woods, but its inhabitants were getting there.

As March was coming to a close, the Butte Health Board reported only a few cases.

By the time the flu had run its course, approximately 5,200 Montanans had died, with more than 1,000 of those deaths occurring in Butte.

One killed in crash on Harding Way

The Montana Highway patrol reported a fatality in a 1 p.m. crash that occurred Thursday near the top of Harding Way.

Butte High School will graduate 267 students in the Class of 2020 in a ceremony at 8 p.m. Wednesday, May 27, at the Butte Civic Center.

For most of her adult life, Mikaila Harwood Ramone has worked in the food service industry in one form or another.

Butte High School will graduate 267 students in the Class of 2020 in a ceremony at 8 p.m. Wednesday, May 27, in the Butte Civic Center. 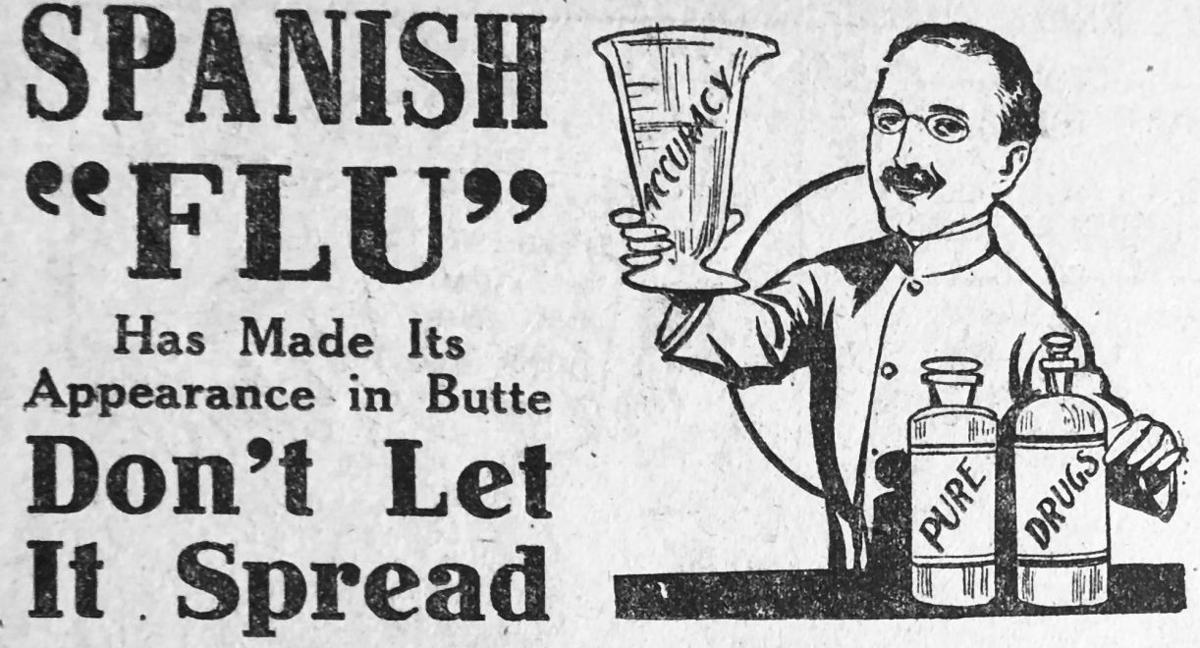 Flu Epidemic is Not a Joke

The Butte Health Board addressed Butte merchants in this advertisement. The ad included stringent rules business owners were to follow.

During the pandemic, volunteers were desperately needed.

There was an ongoing battle with the Butte Health Board to shut down all saloons.

During the Spanish flu pandemic, Jensen's Drug Store would fill your prescription needs.

"Let Us Be Cautious" were the optimum words to residents out shopping.