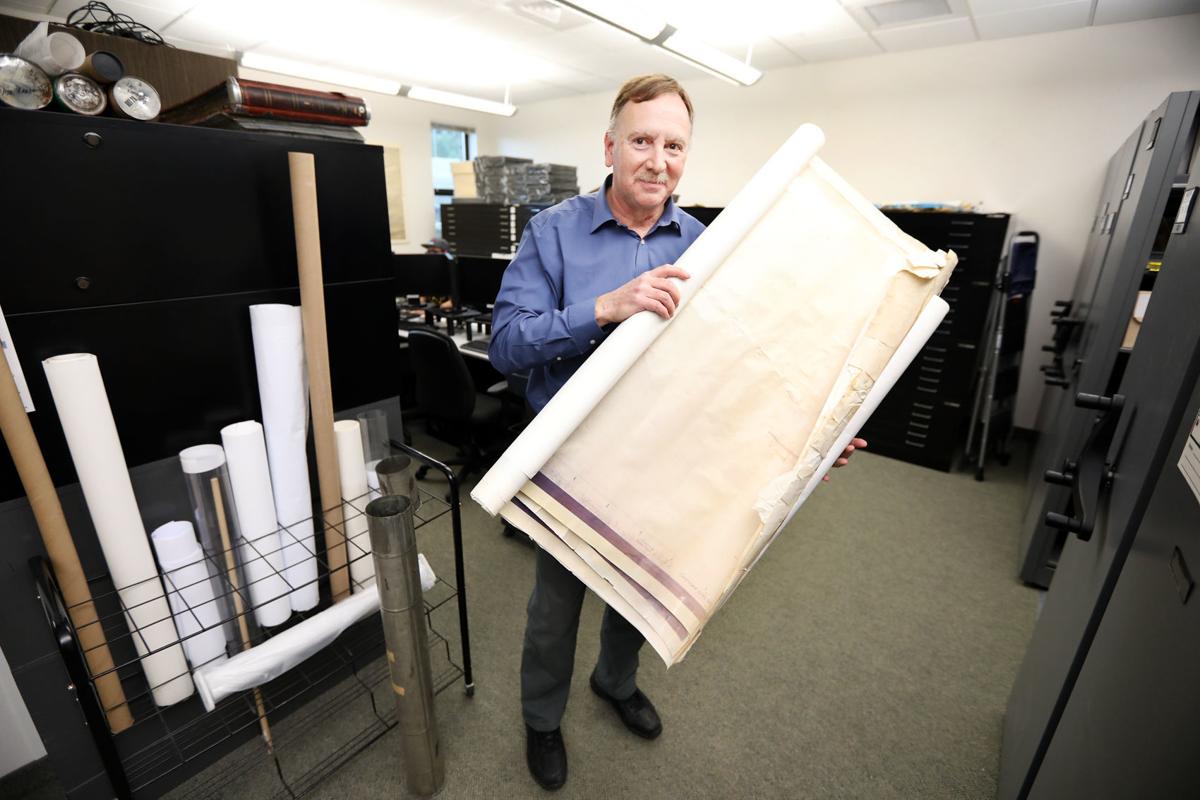 Dr. John Metesh, director of the Montana Bureau of Mines and Geology and state geologist, holds an old map of the Orphan Girl Mine in the archive at Montana Tech's Natural Resources Building in Butte. 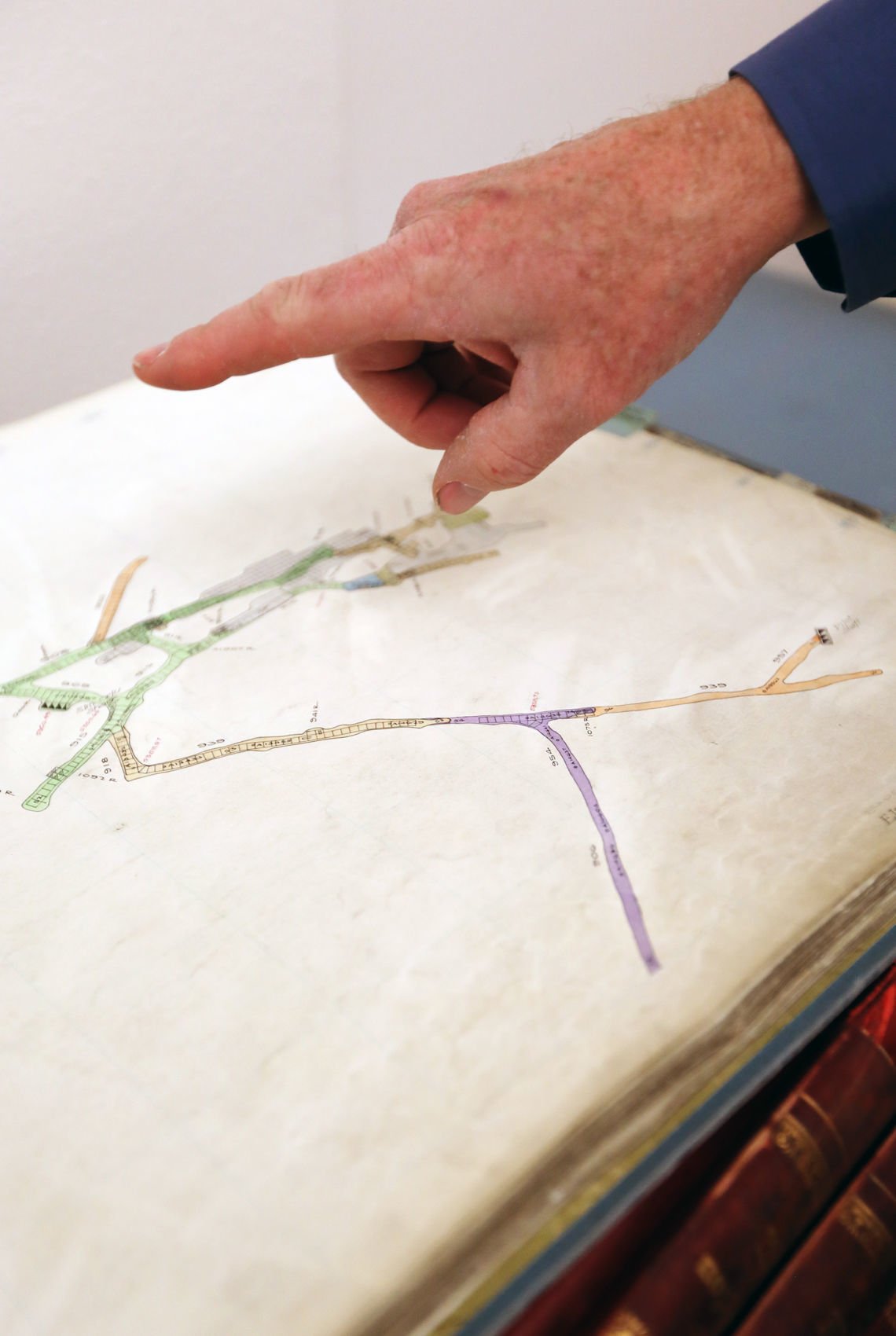 Metesh points out features of an underground mine map at Montana Tech's natural resources building in Butte.

The view from John Metesh's corner office on the third floor of Montana Tech's Natural Resources Building could not be more appropriate.

Stretching to the horizon are the folds and ripples of the Summit Valley and its surrounding peaks. Headframes stand as stark reminders of Butte's mining past. And swaths of green dot the browned October landscape, showing the presence of the most precious natural resource of all — water.

Inside, the view's not bad either.

Throughout the offices and halls of the Montana Bureau of Mines and Geology, mineral samples compete for space on deep windowsills, each one telling a different, ancient story. Stout oak cabinets from early in the last century hold highlights of a century's research. And, everywhere, maps rule.

This week, the Bureau will quietly celebrate 100 years of serving Montana with an open house at both Butte and Billings offices (see related story.)

And as director Metesh enthusiastically attests, the bureau's mission is as up-to-the-minute important today as it was when the bureau was created by the Legislature a century ago.

That mission has evolved over the years just as the state itself has done.

The bureau was established as a department of the State School of Mines "to publish regular and special reports as the state Board of Education (now, the Office of the Commissioner of Higher Education) may direct and as the interests of the State and science may demand."

C.H. Clapp, the third president of the School of Mines, became the Bureau's first director, and the bureau was staffed by the school's faculty.

At first, the Bureau's function was very much focused on metals mining, including mineral identification and an assay department.

But when Francis Thompson became president of the School of Mines in 1928, he saw a greater potential, realizing that documenting the state's geology served a vital purpose.

The same year, the Bureau was able to hire its first full-time employee, Uuno Sahinen, who was a draftsman and statistician.

Over the next four decades, the Bureau grew steadily. The Butte field office was established in 1956, presaging a major focus on coal geology.

In 1969, the Legislature authorized a directorship independent of the president of the School of Mines, and Sahinen became the Bureaus' first "Director and State Geologist," the title Metesh now holds.

From the ’70s onward, the bureau's role has expanded greatly — although each new activity has its roots in the Bureau's original core mission, to map and report on Montana's geology.

One enormously important and interesting addition has been the Earthquake Studies Office. Mike Stickney has operated the Montana regional seismic network out of that office since it began in 1982. It is the repository of seismic knowledge in the state, and that knowledge is growing as Stickney and his colleagues continue research, such as excavating trenches across faults to precisely measure their historic activity.

But it is water that has become arguably the Bureau's most urgent area of study, as historic water rights are being adjudicated and growth in areas like the Gallatin Valley require deep understanding of those resources.

For instance, Metesh says, it's important to understand the relationship between surface water and groundwater. Traditional flood irrigation played a role in recharging the groundwater. Now, he says, both new irrigation methods and development, paving over the land, can cut off that recharge, and it's important to know just how much, and how that impact can be managed.

In that controversial environment, the Bureau has become the state's most trusted authority.

"We're not regulatory. We're not even completely academic," Metesh said. "We're just people out in the field trying to figure out stuff that folks need to know."

"The Bureau is the best-kept secret in the state of Montana," says Butte's longtime legislator, Rep. Jim Keane. "It's more important to the economy of this state than most people understand.

"It's non-partisan, respected on both sides of the aisle, and it has all the information on water in the state."

Keane stressed the importance of converting much of the Bureau's data from paper records to digital. He said the Legislature "put in a program about nine years ago to preserve all that data, from metal mines, coal mines, oil wells, water."

A good example are the century-old stope books. The enormous pages are all being scanned and digitized. "Paper deteriorates," Keane said. "But knowledge should not.

"People should know that 5,000 feet down below Butte, every seven feet is surveyed to accuracy within inches."

Butte native Metesh is one of a sizable number of scientists who have devoted their academic lives to the Bureau of Mines.

He went to Montana State for his undergraduate degree in earth science, then earned a master's degree in geological engineering at Montana Tech, and ultimately a doctorate in geology from the University of Montana.

It was at Tech that he found his academic passion of hydrogeology.

"I took a field course from Marek Zaluski and John Sonderegger, and fell in love with it," Metesh says. "I must have learned something because in a couple of years I was helping to teach the course."

Another early project was monitoring and analyzing Butte mine flooding water levels as Superfund work was beginning on the Berkeley Pit and mine flooding.

One of his first jobs for the Bureau was a total labor of love. He was part of a team that took on the ambitious job of inventorying the state's abandoned and inactive mines.

"It was the best job," he says with a grin. "We got to hike everywhere, collect samples, do a little mapping, camp as needed — all with a salary."

The sprawling project helped federal land managers understand what was out there on public lands, and also helped prospectors who wished to reprocess tailings — making money and helping to clean sites up.

For a couple of years now, the bureau has been working to produce the "Centennial Volume," a state-of-the-art publication on the geology of Montana.

The volume will actually be two volumes. The first a survey of geology from the Precambrian, or the earliest eon of earth's history, to the Quarternary Glaciation, which in geologic terms is up to the minute.

The second, he said, will include special topics, including a contribution by Jack Horner on vertebrate paleontology, one by John Dilles on Butte geology, and more. Geologists from all of Montana's campuses are contributing, he said. Publication is expected early next year.

The Bureau now has 65 employees, including eight in the Billings office. Many have teaching roles. The Bureau also has provided both work and research opportunities for hundreds of students, both undergrad and graduate.

Metesh has been the bureau's director for seven years and has worked there for 30. "I'm by no means the senior guy around here," he said, citing the work of several who have been with the bureau far longer, including Stickney. "Dick Berg, who is emeritus now, has been here 50 years — half the bureau's life," he said. "Bob Bergantino and Marv Miller have been here probably 45, and Susan Vuke is probably pushing 40."

"It's a very quick, dynamic group," Metesh said of the bureau's staff. "It's hard to stay out in front of them, so I don't try. I'm just with them."

Asked how a bunch of scientists celebrate a centennial  in addition to the open house, Metesh smiled. "We actually celebrate a lot," he said. "We had a picnic this year, we have a big Christmas party planned."

But mostly, they celebrate by continuing to research, to preserve, and to inform.

"We serve the people of Montana," Metesh says. "We always have."

The Bureau of Mines and Geology will celebrate its centennial with an open house 1 to 4 p.m. Thursday, Oct. 24, in both its Butte and Billings offices. Attendees will be able to meet the bureau's scientists and tour laboratories, get rocks identified, and more. The Butte office is in Montana Tech's Natural Resources Building, 1300 W. Park St., and the Billings office is at 101 Grand Ave., at the corner of Grand Avenue and 1st Street West.

'Anxious to get open': Silver Bow Drive-In set to kick off season May 29

In a time where people are craving a return to some sense of normalcy, one staple of the Butte summer scene is preparing to deliver.

Butte High School will graduate 267 students in the Class of 2020 in a ceremony at 8 p.m. Wednesday, May 27, at the Butte Civic Center.

Dr. John Metesh, director of the Montana Bureau of Mines and Geology and state geologist, holds an old map of the Orphan Girl Mine in the archive at Montana Tech's Natural Resources Building in Butte.

Metesh points out features of an underground mine map at Montana Tech's natural resources building in Butte.