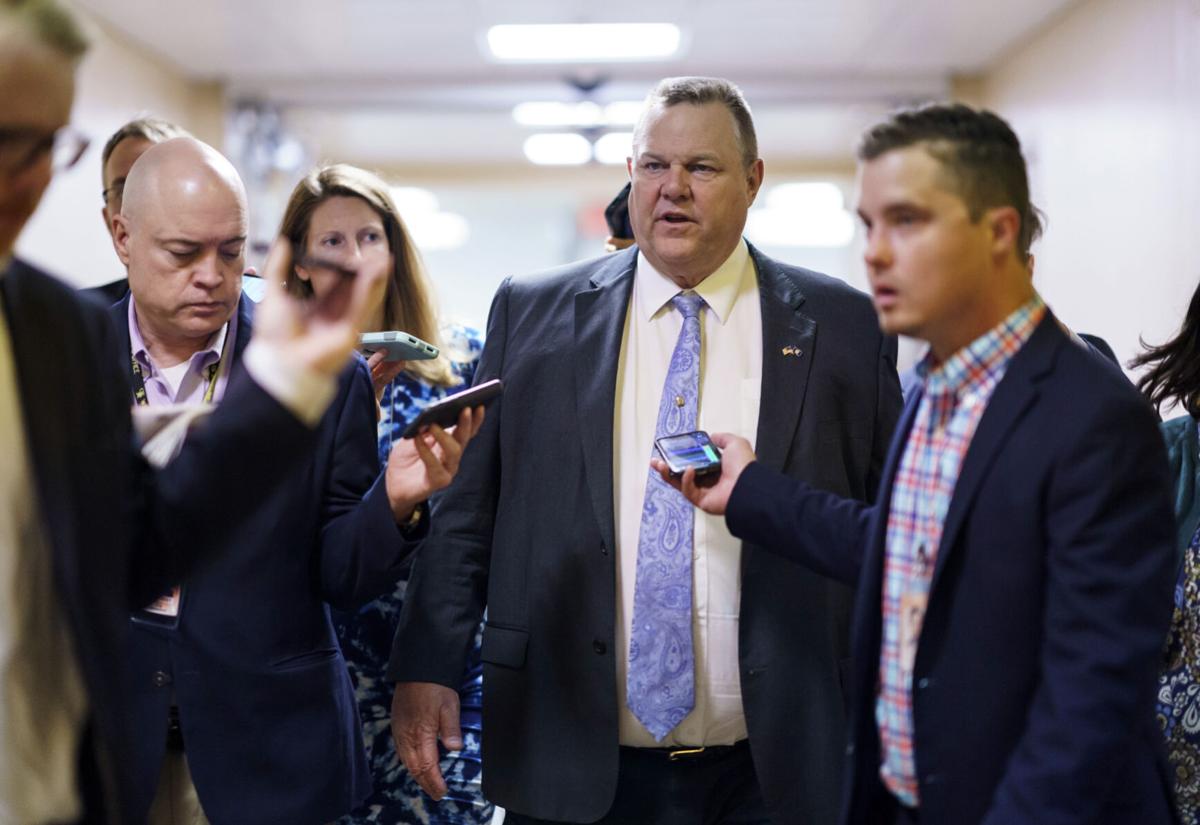 Sen. Jon Tester, D-Mont., a negotiator in the infrastructure talks, arrives for votes at the Capitol in Washington, Tuesday, July 13. Tester was part of a group of 10 lawmakers, Republicans and Democrats, who negotiated the bipartisan package last summer. 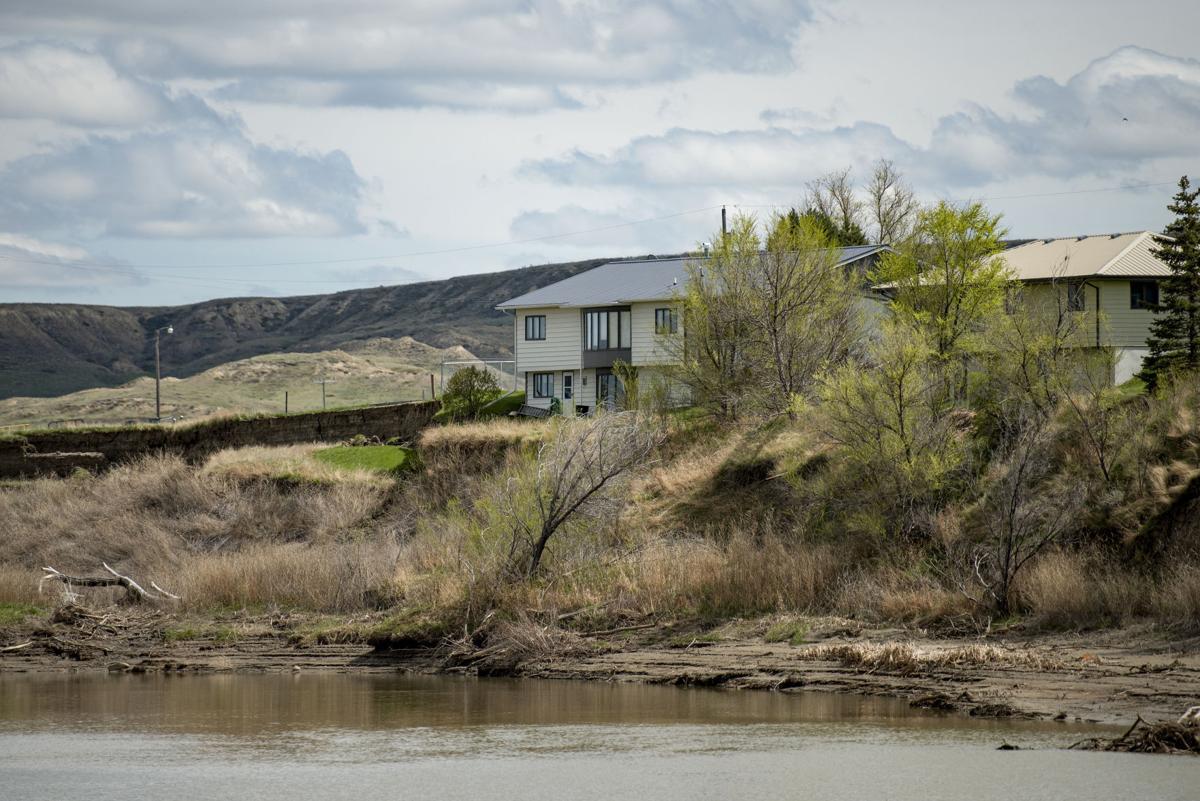 The river bank surrounding the home of Hinsdale, Mont. resident Ernie Marinko erodes as the water levels of the Milk River fluctuate in 2020.

Calling the Biden administration’s $1 trillion investment in American infrastructure the first of its kind in at least a generation, U.S. Sen. Jon Tester said Monday that construction in Montana should begin in a few months.

Tester, a Democrat, reiterated to reporters that roughly $3 billion in road, airport and water projects should be a benefit to the state. Many projects already underway are likely to be completed earlier and with fewer state and local tax dollars.

The new spending bill allows state and local governments to use money from the American Rescue Plan Act, passed earlier this year, as match money when grants are available. Montana's Republican controlled Legislature directed $459 million in federal ARPA funds earlier this year to water and wastewater infrastructure spending. About $125 million has been committed so far to 74 out of 300 projects proposed by local governments. Legislators have been waiting for the infrastructure bill to be signed into law before making more spending decisions.

“Everywhere I go across our great state, I see roads that are in disrepair, bridges that need to be brought up to 21st century standards, outdated water systems, and a lack of high-speed internet holding our economy and communities back,” Tester said. “It’s clear to all Montanans that for 20 years, we've been running a 21st century economy on infrastructure that was built by my parents and grandparents. Washington has kicked the can down the road literally for decades.”

Estimates on Infrastructure Act spending in Montana include $144 million at community airports including $19 million in Billings and $7.4 million in Helena. Spending on Montana roads and bridges is expected to total $2.82 billion.

Tester was part of a group of 10 lawmakers, Republicans and Democrats, who negotiated the bipartisan package last summer. He was at the White House on Monday when President Joe Biden signed the bill into law. The senator was the only member of Montana’s delegation to vote for the bill.

The infrastructure investment will finally put to rest several large-scale projects to provide safe drinking water to the rural areas. The Fort Peck/Dry Prairie Rural Water System is one of three in Montana that should receive enough money to be completed after a 21-year slog.

Congress in 2000 approved the massive undertaking of providing clean water to parts of the rural West, particularly in Indian Country where treaties had long promised clean water, but the federal government had failed to deliver. While lawmakers recognized the cost, for example the Fort Peck/Dry Prairie was estimated at $275 million year 2000 dollars, they put the programs on a steady drip of a few million dollars a year for the next 20 years, letting inflation take a toll on construction costs. The Rocky Boy’s/North Central Montana Regional Water System and the St. Mary’s Rehabilitation Project are the other major Montana projects targeted by the Infrastructure Act. Combined, the three projects serve roughly 77,000 people and service Hi-Line communities for 450 miles.

Repairs to structures rerouting water from the St. Mary’s River to the Milk River qualify for funding in the rural water portion of the bill. The Milk River Project is expected to receive as much as $100 million from the Infrastructure Act.

In 2020, the Milk was without supplemental water because of the collapse of the diversion infrastructure rerouting water from the St. Mary’s. The diversion can best be understood as 29 miles of chutes and pools, constructed in the early 1900s, that slow the water as it descends from the St. Mary’s to the Milk. The entire system needs an estimated $200 million in repairs, but the diversion work is a big-ticket item.

The bill includes $15 million for studying an expansion of Amtrak passenger rail, something for which supporters of a southern Amtrak route across Montana lobbied.

One item of interest for Montana coal power is $2.5 billion dedicated to carbon capture demonstration projects and $937 million committed to a large-scale carbon capture pilot project, plus $2.7 billion for loans to create a carbon transportation infrastructure. Colstrip Power Plant supporters have repeatedly lobbied for a carbon capture investment for the troubled power plant.

There is $2.5 billion set aside to complete all authorized Indian water rights settlements including settlements with the Blackfeet, Crow, and Confederated Salish and Kootenai tribes.

In addition, there’s $20 million for the Joint Fire Science Program, which supports research at the University of Montana and Montana State University.

Another $450 million is available for burned area rehabilitation and replanting.

“It is irresponsible for Congress to force the American taxpayer to fund an infrastructure bill that barely touches on infrastructure. A country cannot tax and spend its way into prosperity,” Rosendale said.

The Senate passed the bill Aug. 10, with 19 Republicans joining Democrats to approve the bill. Montana’s Republican U.S. Sen. Steve Daines announced he would not support the bill, citing a Congressional Budget Office estimate that the spending will add $256 billion to the deficit over 10 years.

Tester, who had also said he wouldn’t vote for the bill if it raised taxes, faulted the CBO for not recognizing existing funding sources like re-use of $53 billion in unspent COVID unemployment benefits and $173.3 billion in unused COVID tax credits. There was also $43.45 billion in revenue in taxes related to cryptocurrencies and chemicals.

After a friend of the married couple requested a welfare check, the Helena Police Department responded to the apartment.

Sen. Jon Tester, D-Mont., a negotiator in the infrastructure talks, arrives for votes at the Capitol in Washington, Tuesday, July 13. Tester was part of a group of 10 lawmakers, Republicans and Democrats, who negotiated the bipartisan package last summer.

The river bank surrounding the home of Hinsdale, Mont. resident Ernie Marinko erodes as the water levels of the Milk River fluctuate in 2020.