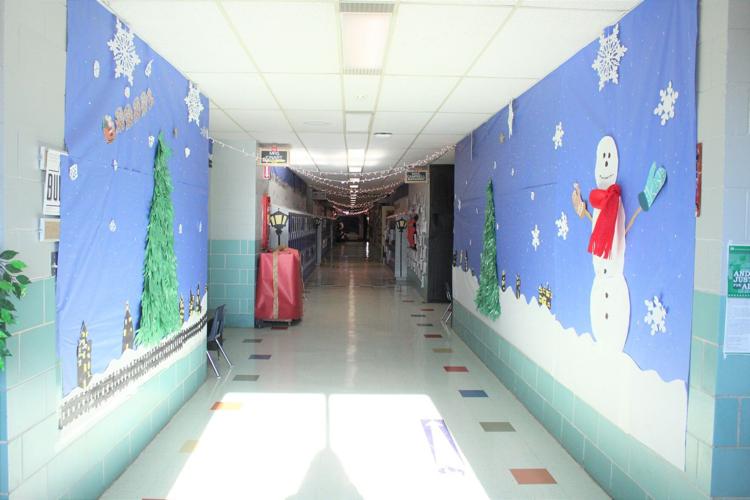 The first floor of Emerson Elementary School was decorated by its pre-k, kindergarten and first grade students for the Christmas decorating competition. 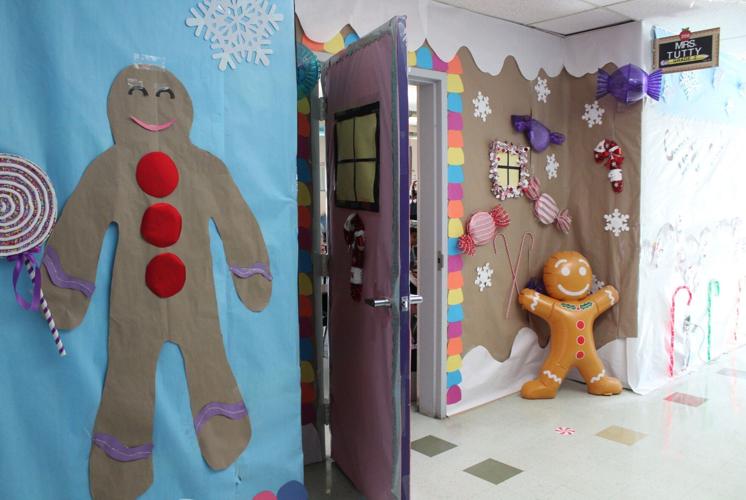 A classroom on the second floor of Emerson Elementary School displays a gingerbread theme for the school's floor decorating competition. 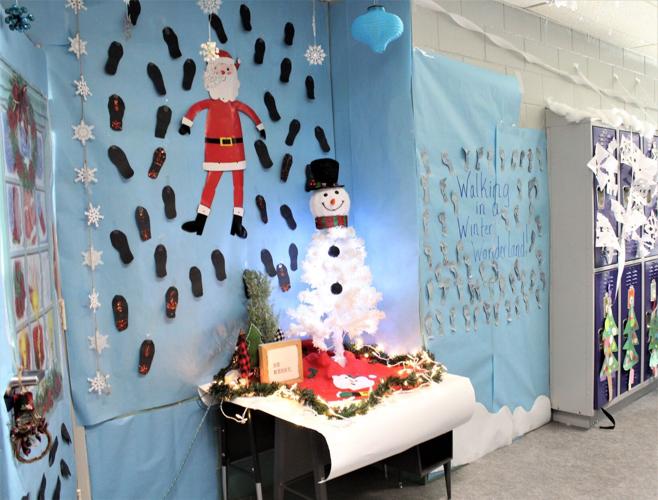 At Emerson Elementary School, teachers and students alike not only got into the holiday spirit, but also embrace the spirit of competition.

This is the first time the school has done a Christmas floor decorating competition, and it’s not an annual event, said principal Brenda Miner.

First-grade teacher Alynn Jonart said the floor decorating – which has been going on since before Thanksgiving – started as a competition between the teachers, and evolved to include the students. The teachers decided on three themes: one for each floor.

On the first floor, where the pre-k, kindergarten and first-grade classrooms reside, the theme is “The Polar Express,” the 2004 animated movie which was adapted from the 1985 book by Chris Van Allsburg.

When you first walk down the hall from one side, you’ll see Christmas trees made of some of the students’ green-painted handprints.

This craft was a favorite of first-grader Parker Casagranda, while his classmate Adriane Diaz said hers was making the houses that line the wall next to the trees.

Both students said they believe the first floor will win the competition.

“Because we have way better stuff,” Casagranda said with a grin.

And “because everything looks really Christmassy,” Diaz said.

A soft, white fabric adorns the tops of the lockers, to emulate snow. The doors to each classroom have a list of all students inside.

On one end of the hallway is a wall plastered with yellow tickets, hole-punched with the word BELIEVE on them, just like in the movie. Next to the tickets are hand-cut, paper snowflakes.

Jonart said that the tickets, handprint tree and snowflakes are just two of the many pieces of art put on the walls created by the students.

Although the first floor teachers spent evenings – and in some cases, weekends – papering walls, doors and hanging lights, it was important to the teachers that the students were as involved as possible.

“The kids really like it,” said Jonart of the competition. She said that she’s been playing music from “The Polar Express” in the morning to get the kids excited for the school day.

While some of the supplies on all three floors were from what teachers already had or bought with their own money, the school’s Parent Teacher Organization gave each floor $100 for reusable supplies – like the lights and some store-bought snowflake decorations – to put toward the decorating.

Jonart added that the kids seemed to like coming to school each morning and seeing what the teachers had done while they were away, possibly making them more excited to come to school.

The second floor’s theme is gingerbread. This floor is home to grades two, three and one fifth-grade class.

Each classroom door is made to look like that of a gingerbread house. When you walk to the floor, the first thing you see on one end is a giant blow-up ginger bread house entrance. On the other end are two cushioned chairs with a blow-up gingerbread man.

The walls are adorned with balloons that look like multi-colored Christmas lights and studen- made candy decorations.

Brody Evenson, a third-grader on the second floor, said his favorite part of helping to decorate was making the math gingerbread house, which displays math problems on the candy parts of the paper decoration.

When asked which floor they thought would win, Evenson and Nelson agreed it was between the second and third floor.

“The third floor has lights that look like snow is falling,” Evenson said.

“And the second floor has a blow-up gingerbread house when you walk in,” Nelson said.

The third floor’s theme is winter wonderland. On this floor, the students did most of the decorating, according to sixth-grade teachers Taylor Tregidga and Colin Hollow.

“We had our kids do everything,” Hollow said.

“Besides the lights,” Tregidga added.

They both agreed that the best part was seeing the kids get so excited.

On one end of the third floor is a sign that reads “Walking in a Winter Wonderland,” against light blue paper, next to a blow-up, light-up snowman.

One classroom door has a giant likeness of the Grinch made out of green and red paper. Another has the likeness of an elf’s costume. Another, Santa Claus.

There are homemade snowflakes hanging from the ceiling and lining the walls.

Third floor fourth-grader, Elle Eckerson, said her favorite part of decorating was working together with her peers.

She and her friends stayed after school some nights and occasionally came in on the weekends to decorate, she said.

"We made the footprints," she said with a smile, referencing the black Santa-prints on part of the wall.

She’s confident the third floor will win the contest.

Her friends Kadynce Warner and Grace Blodgett agreed, but Harlow Haight had a different prediction.

“I think the first floor will win,” she said.

So, who has the best Christmas-decorating skills? Miner invited several impartial people and organizations from the community to visit the school and rank each floor on a rubric. The results will be tallied and announced Friday over the intercom, Miner said.

The FBI and Homeland Security are investigating a highly sophisticated social engineering attack on Butte School District No. 1.

A man accused of sexually assaulting a 12-year-old girl at a house in Butte 10 to 12 years ago pleaded guilty Wednesday.

NBC’s “Dateline” will air a two-hour show Friday night that looks at the fatal shooting of Broadwater County Sheriff’s Deputy Mason Moore in 2017.

UAE farmers use technology to grow crops in the desert

Chinese tourists can now travel to up 20 countries

Chinese tourists can now travel to up 20 countries

The first floor of Emerson Elementary School was decorated by its pre-k, kindergarten and first grade students for the Christmas decorating competition.

A classroom on the second floor of Emerson Elementary School displays a gingerbread theme for the school's floor decorating competition.