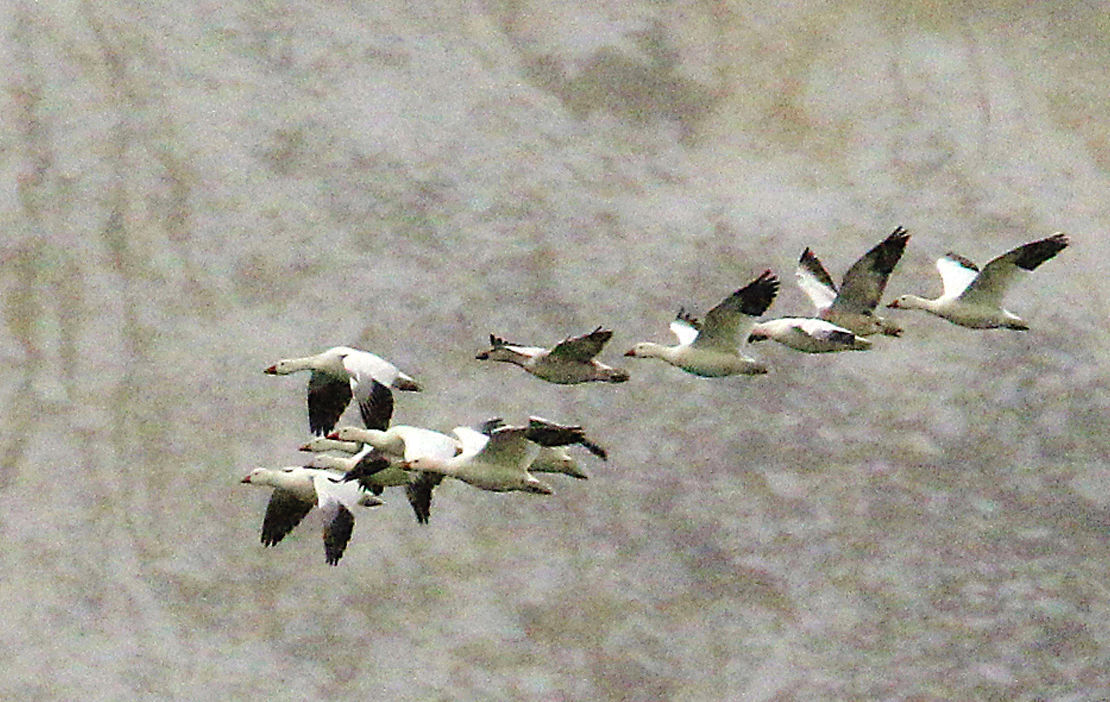 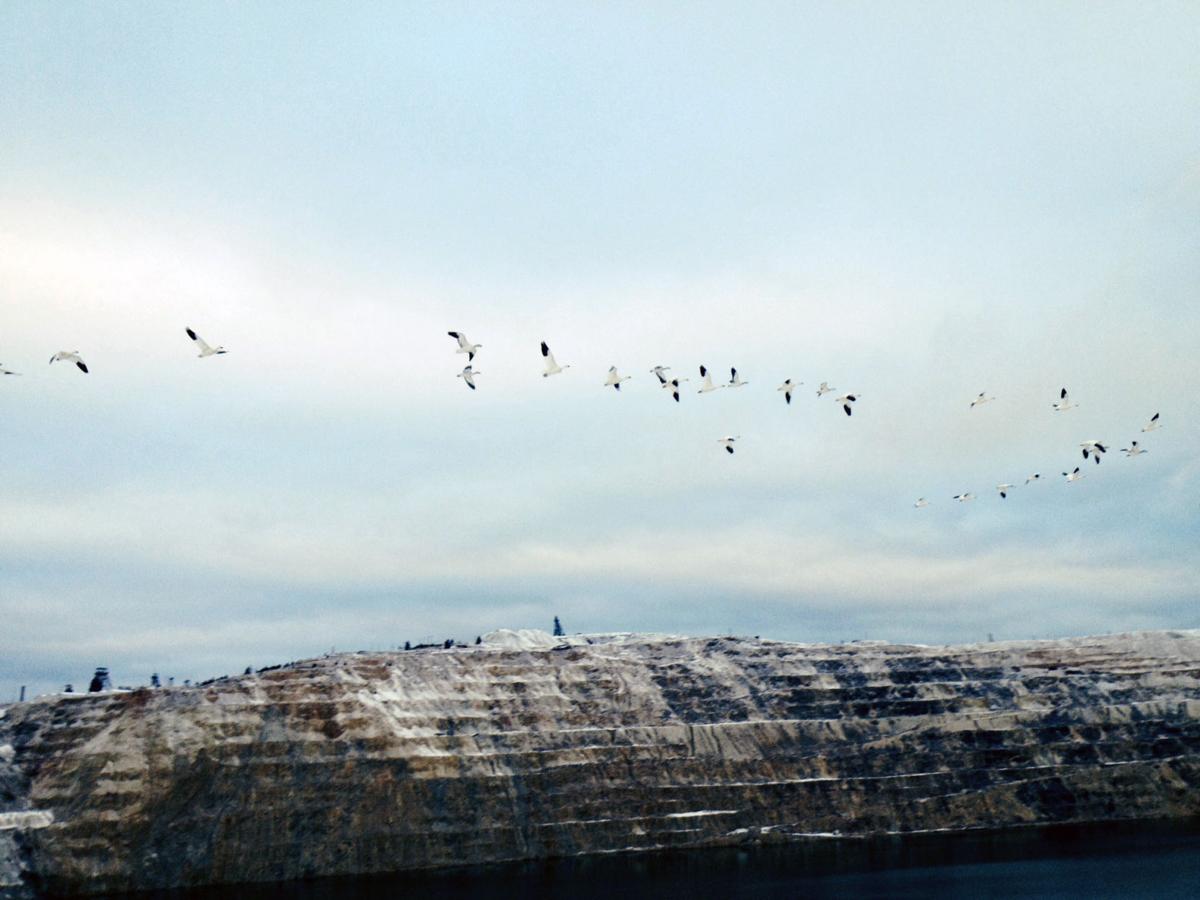 In this photo, taken Friday morning, snow geese leave the Berkeley Pit after five days of swimming on the toxic water. So far, approximately 50 remain alive, according to Montana Resources. The mining company is still counting the dead and won't release preliminary numbers, but mine officials say they expect it to be larger than the 342 snow geese die-off in 1995.

Montana Resources officials say they won't have a final tally of snow geese that perished last week in the contaminated Berkeley Pit water until mid-week at the earliest.

Federal officials say once the count is complete, the Environmental Protection Agency will determine if MR was adhering to the bird hazing program appropriately. Fines could be levied if the geese landed due to company negligence, say EPA officials.

The program, based on loud noises to scare birds, was put in place due to the 1995 snow geese die-off when 342 died on the pit. State and federal agencies designed the program.

"Trying to get some idea of mortality has been difficult," said EPA Montana Superfund director Joe Vranka.

The problem is due to the lack of access to the lake. The southeast walls have been unreliable for the last few years. As a result, officials cannot take a boat out on the water. Officials must rely on overhead imagery to get the numbers, said Vranka.

Using both telescope, drone and aircraft, mine officials began counting the dead birds over the weekend. MR officials said Monday they are still counting.

Mark Thompson, the mine's manager of environmental affairs, would only say to expect the count “to be bigger” than the 1995 incident.

At that time, the 342 snow geese died due to drinking pit water, which is high in sulfuric acid. Necropsies also showed that those birds had high levels of heavy metals in their kidneys. That die-off gained national media attention.

The mining company estimates that as many as 10,000 migrating snow geese landed in the pit water the night of Nov. 28. The usual landing spot for migrating snow geese — Freezout Lake west of Great Falls — was largely frozen when the geese passed over, according to previous reports from the state Department of Fish, Wildlife and Parks. Warm Springs Ponds, south of Deer Lodge, another popular layover spot for migrating birds, were also mostly frozen, according to a previous story.

An individual reported to animal control on Thursday that there were two dead geese in the Walmart parking lot, Randall said. Another person found a live goose in front of a casino on the 2200 block of Amherst Avenue Wednesday. That goose died Thursday while still in animal control custody, Randall said. All three dead birds were turned over to MR.

MR officials said they collected 20 dead snow geese for U.S. Fish and Wildlife Service to analyze. They say they are also holding the three dead found in town in case federal officials want to perform necropsies on those birds.

Thompson said about 50 live snow geese remain in the pit, swimming on the pit's toxic lake a week after landing.

According to a 2002 report on Montana Resources and Atlantic Richfield Company’s bird hazing program, the pit is too large for either netting or Styrofoam bird balls to be practical. Currently the contaminated lake is around 700 acres in size.

ARCO and MR are the responsible parties for the Berkeley Pit Superfund site.

The “passive hazing” program, which is noise-based, has been largely successful, according to the report. Between 1996 and 2001, over 22,000 birds were observed at the Berkeley Pit; 75 bird mortalities were reported during those years.

Mine officials say they are checking with federal officials to see if they should expect any additional large bird migrations headed this way.

Vranka said EPA is in contact with officials at Freezout Lake to watch for more birds. MR is “continuing round-the-clock hazing efforts to keep birds out of the pit,” said Vranka.

How the snow geese drama played out in the Berkeley Pit: A chronology

Following are the news stories written by The Montana Standard since snow geese were discovered in the Berkeley Pit two weeks ago. Also includ…

After a tense few days of struggling to get more than a thousand snow geese to leave the Berkeley Pit's contaminated water, Montana Resources …

When more than a thousand snow geese landed on the toxic Berkeley Pit Monday night, the birds weren’t just responding to the need for rest, bu…

Perils of the pit: 342 geese dead after fateful landing 20 years ago

Perhaps a defining moment for the Berkeley Pit came 20 years ago on Nov. 14, 1995, when 342 snow geese were found dead floating on the surface…

Life around the Pit: There's more than you might expect

Butte mine officials: Snow geese deaths number into the thousands

Will it make it? One rescued snow goose awaits its fate

The unmanned boat Montana Resources and Atlantic Richfield Co. have planned to launch into the Berkeley Pit for close to a year made a success…

In this photo, taken Friday morning, snow geese leave the Berkeley Pit after five days of swimming on the toxic water. So far, approximately 50 remain alive, according to Montana Resources. The mining company is still counting the dead and won't release preliminary numbers, but mine officials say they expect it to be larger than the 342 snow geese die-off in 1995.