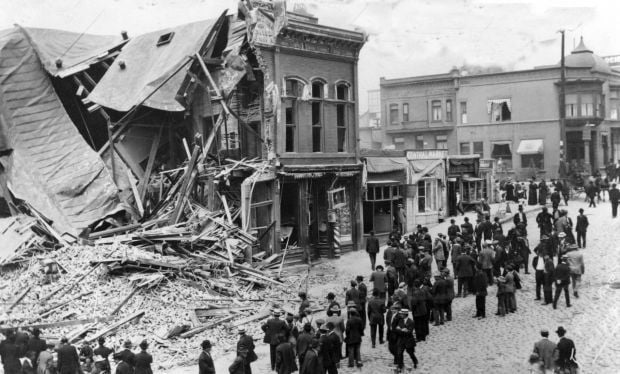 This column is by Floyd Bossard, of Butte, who had a long career in the mining industry. The column, called “Braggin on Butte,’’ runs periodically and focuses on Butte’s mining history and related topics. Following is the third installment:

The initial aspect of any semblance of union activity in Butte occurred when placer miners' wages were established at $6 per day -- an unheard of goal then and for decades following.

In 1878, the Butte Workingman's Union was formed, becoming the first organized union in Montana. It organized the first miners' strike that year, protesting wage cuts in the silver mines. In 1880-81, this union reorganized as the Butte Miners Union with 1,800 members. During that same period, non-miners formed smaller, separate craft and labor unions. The union secured the "closed shop" and Butte became known as the "Gibraltar of Unionism.''

In 1893, the Butte Miners Union, one of the strongest and richest mining unions in the United States, took the lead in the foundation of the Western Federation of Miners and became Local No. 1. W.A. Clark reduced his miners' shifts from 10 to 8 hours in 1903.

Enter the Amalgamated Copper Mining Co., whose actions led to the consolidation of most of Butte's mining properties from 1906 to 1914. Labor relations were exasperated when miners’ union factions clashed over variable wage contracts and financial aid to upper Michigan copper mine strikers. This is also the period when Amalgamated introduced the notorious "rustling card" to screen identified unwanted workers.

In 1907, the Miners Union noted and set the minimum wage at $4 per day, instead of $3.50 -- the same wages paid in 1878. The same year, Butte miners were closed down temporarily by a strike of machinists, electricians and blacksmiths requesting $4.50 per day. The strike was settled when the crafts accepted $4.25 per day.

In 1913, Amalgamated took advantage of the internal dissent among the unions and declared the first "open shop" since 1881. The result was the first miners' strike since 1878. The following year, 1914, the Miners Union Hall was dynamited and destroyed by dissenters. That same year, Amalgamated's employment office was dynamited. Two days later, Sept. 1, 1914, 700 soldiers arrived in Butte and imposed martial law for two and one-half months.

Through arbitration in 1916, the Workingman's Union agreed to $3.75 per day, reducing to $3.50 per day when the copper price falls below 15 cents per pound. The radical Butte labor and anti-war movements and reluctant corporate and federal regression did little to make for happy days. In 1917, the Metal Mine Workers Union organized a 15,000-miner strike demanding safer working conditions and a $6 per day wage. Subsequently electricians, machinists, boilermakers and blacksmiths participated in a sympathetic strike.

The miners resumed operations three months later and the Metal Mine Workers Union "officially" called the strike off six months later. This was the same year (1917) that Industrial Workers of the World union organizer Frank Little was abducted, beaten and hanged from a railroad trestle on Centennial Avenue.

In 1919, wages were cut $1 per day. A strike partially shut down the mines and 800 soldiers were called in again. Once more, the Metals Trade Unions (electricians, blacksmiths and machinists) went on strike -- not satisfied with a $1 per day wage increase and working conditions. The Anaconda Copper Mining Co. instituted the contract system and the miners were paid for piece work.

For the record, federal inquiries into the past several years of labor union activism brought about significant and lasting health and safety improvements in Butte's underground mines.

In 1921, management declined to renew contracts with the various labor unions because of inefficient, regressive working rules and the negative attitude of the unions toward supervisors and management. Friction between the I.W.W. and independent miners contributed to the overall ineffectiveness of miners' unionism in 1922 and subsequent years.

A general strike in 1934 of miners, pumpmen, hoisting engineers and the Metal Trades Unions resulted in an increase of 50 cents per shift and the creation of an Industrial Relations Committee. The miners had been reorganized under the banner of the mine, mill and smelter workers in affiliation with the American Federation of Labor (A.F.L.). This relationship ended in 1937 when the Mine-Mill defected to the Congress of Industrial Organization (C.I.O.). This meant that Butte mining and Anaconda smelting operations became fully union organized and would remain so until the 1980s.

The Mine-Mill Union was ousted from the CIO in 1950 and gradually lost ground to the Steelworkers Union in 1967, which represented the mine workers until 1982 when the Berkeley Pit was shut down. The latest chapter of Butte's labor history may well have happened in 1986 when Montana Resources reopened the Continental Pit and Weed Concentrator as a non-union operation.

SIDE NOTE: The Anaconda Copper Mining Company paid the miners in cash weekly up until 1933.

Floyd Bossard, an Anaconda native, is a graduate of Anaconda High School, and graduated from the Montana School of Mines (now Montana Tech) with a degree in geological engineering in 1950. Furthering his studies in this field, Bossard earned his masters in industrial hygiene from the University of Cincinnati. He spent decades as a consulting engineer on mine ventilation, air pollution control, environmental impact studies and many other projects.

This column is by Floyd Bossard, of Butte, who had a long career in the mining industry. The column, called “Braggin on Butte,’’ runs periodic…

Frank Little's 13 days in Butte: 'Look the city daddies in the face and tell them to go to hell'

Editor's note: Tuesday, Aug. 1, 2017, marks the 100th anniversary of the lynching of labor organizer Frank Little in Butte. This excerpt from …

Watch Now: How to reduce your stress levels

PennyWise Episode 46: Why new changes to life insurance may benefit you to buy right now

PennyWise Episode 46: Why new changes to life insurance may benefit you to buy right now

These essential oils are amazing for curly hair

These essential oils are amazing for curly hair