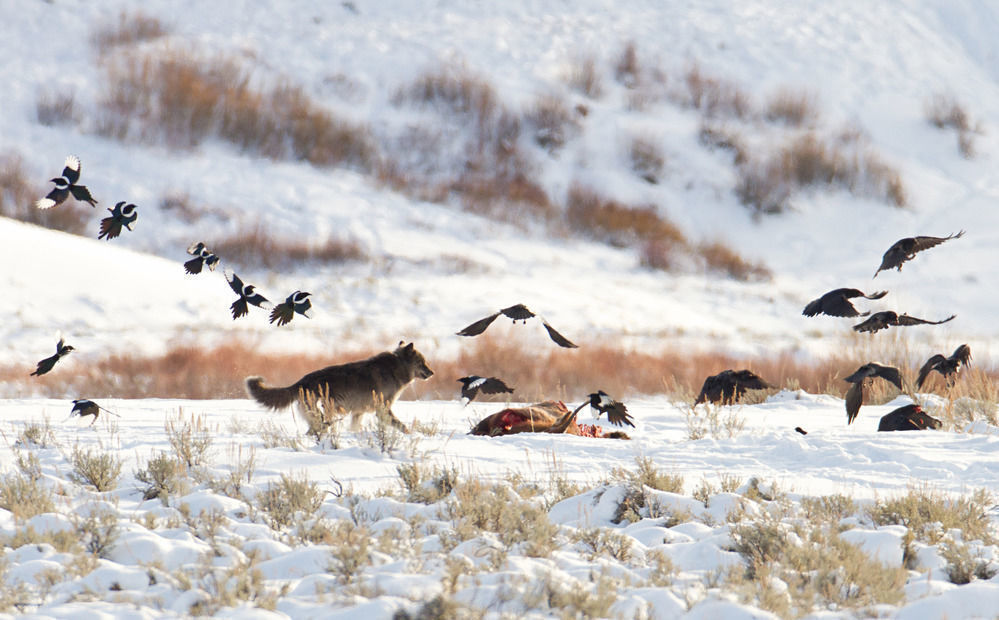 A wolf chases magpies and ravens from an elk carcass near Soda Butte Creek in Yellowstone National Park. Wildlife areas around the world have tried similar approaches to a resolution proposed by Wyoming Rep. Albert Sommers to use fees to help fund wildlife conservation outside of national parks. 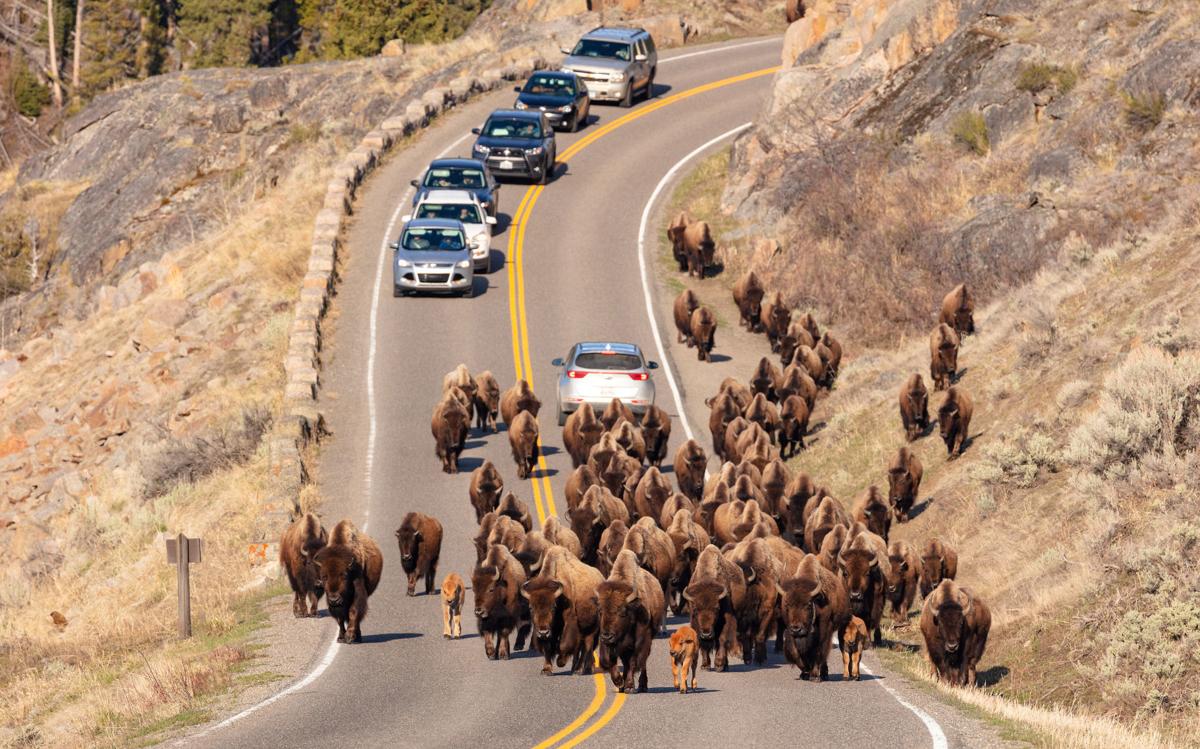 But none of that wildlife – not the iconic elk herds, the wolf packs, the pronghorn the mule deer or the grizzly bears – understand where the parks begin and end. They move by their own set of internal, ancestral rules, following food, their mother’s journey or easier passage through deep, winter snow.

And as a result, that varied wildlife prized and valued by locals and millions of people from around the world, is supported for chunks of the year by private and public land outside of the federally-managed parks themselves.

That’s why, in 2018, Wyoming Rep. Albert Sommers proposed a resolution that was later passed asking the Interior Department and the National Park Service to work with the three states to increase the visitor fee in Yellowstone. The measure was more conceptual, he said, a proposed way to ease the financial burden on management agencies and landowners.

“The idea was, is there a way to capture revenue off of all of the people who visit the park and provide it back to the states to provide conservation work for things like wildlife crossing projects, mitigation efforts for large carnivores, mitigation on elk?” Sommers said recently.

Longtime Wyoming researcher Arthur Middleton wondered what that could look like in practicality. So he assembled a team of economists, lawyers and biologists to run the numbers and probabilities of what would be the impact of either raising park fees for conservation efforts outside of park boundaries, or levying some form of tax to help pay for those efforts. What they found could be a basis for a statewide, or regional, conversation for conserving those wildlife that call Yellowstone, Grand Teton and the surrounding three states home.

The resolution’s idea is not a new one. Wildlife areas around the world have tried similar approaches, according to the paper by Middleton and others. Visitor fees from tiger reserves in India, for example, go to conservation foundations that pay for human-wildlife conflict outside of the reserves. Several African countries use a portion of visitor fees for surrounding communities.

And while it’s not been applied to parks in the U.S., it has been discussed, said Chris Colligan, wildlife program manager for the Greater Yellowstone Coalition.

The paper’s experts considered the economic impact of increasing park fees first, and then raising some other form of tax or levy.

An entrance fee increase of between $1 to $10 per vehicle would raise between $1 million and $13 million each year. That accounts for a very slight decline in visitation, but as economist Bryan Leonard pointed out, entrance fees are only a small fraction of the amount of money people spend while visiting national parks.

“The upshot is, moderate fee increases and/or small tax changes on lodging fees or sales tax doesn’t seem like it will significantly impact visitation to the park, which will raise significant revenue,” said Leonard, who is an assistant professor at Arizona State University and co-author on the paper.

But raising fees for use outside the park would likely require Congressional approval. The paper’s authors suggest Congress possibly do a “demonstration program” with Yellowstone and Grand Teton for a certain number of years then evaluate the outcome. Local residents, for example, could be excluded from the additional fee.

The paper also examined raising sales tax or creating a lodging tax, the first of which was recently passed in the Legislature, with revenue going to local communities and the state’s Office of Tourism.

Another option could be to create resort districts in communities around the park such as already exist in Teton Village and Grand Targhee. Special sales taxes within those resort districts could then to go conservation efforts.

“The Wildlife Society has done a lot of work highlighting the deficiencies in state wildlife budgets because they’re so based on hunting and fishing license fees,” said Temple Stoellinger, an assistant professor at the University of Wyoming’s Haub School of Environment and Natural Resources and College of Law and co-author on the paper. “As we see fewer people hunting and fishing, those budgets decline, and finding a way to stabilize those budgets is really important, particularly for nongame species.”

One of the most appealing aspects of this idea for Stoellinger and others is the disparate group of people brought together to support the idea of using park fees outside of the park from outfitter and Park County Commissioner Lee Livingston to the Greater Yellowstone Coalition.

For Livingston, harnessing some of the money brought by millions of tourists from around the country and world into the parks each year only makes sense. It’s more equitable than a tax, he said, because it targets those visitors looking for a unique wildlife experience and uses the money to ensure that wildlife have a robust ecosystem in which to thrive.

It could take some of the burden off of cash-strapped agencies like the Wyoming Game and Fish Department, which pays for damage to land and livestock from elk, deer, wolves, cougars and bears.

“It could stabilize populations and ensure historic migration routes are protected,” Livingston said. “I also would like to see conflict resolution as part of this. We have folks making a living on the land that are dealing with predation that is significant, and I wouldn’t support this going forward if there wasn’t a conflict resolution component.”

Stoellinger cautions that whatever the solution, it doesn’t take away from national parks already saddled with a maintenance backlog of more than $11 billion across the country.

From here, Sommers hopes perhaps Gov. Mark Gordon will begin to push the idea with the federal government.

“I’ve had conversations with the governor about it and so have others. Someone has to take the bull by the horns and do it,” Sommers said. “The time is now.”

A very large spider gave my son a surprise as he bent down to enter his tent on a recent camping trip to Fort Peck Reservoir.

Be courteous and quick at boat ramps

If you were recreating on a river or lake over the Fourth of July weekend you may have encountered a lot of other folks.

Reports of massive walleye catches in the Crooked Creek area of Fort Peck Reservoir make it the pick of this week.

Planning to camp in Montana or Wyoming for the long weekend? Better have a reservation

If you were planning to camp at a Wyoming State Park over the holiday weekend, you better have a reservation.

A California woman was gored several times by a bison on June 25 in Yellowstone National Park after apparently approaching the animal to take its photo.

A counterculture gathering on the Nez Perce-Clearwater National Forest intended to celebrate peace and inclusion is instead sowing the seeds of discord and division.

A wolf chases magpies and ravens from an elk carcass near Soda Butte Creek in Yellowstone National Park. Wildlife areas around the world have tried similar approaches to a resolution proposed by Wyoming Rep. Albert Sommers to use fees to help fund wildlife conservation outside of national parks.