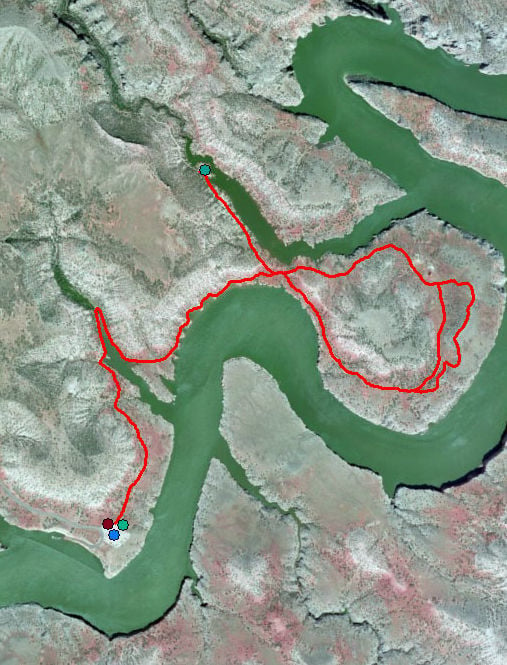 The Barrys Island hike starts at the parking lot for the boat ramp at Barrys Island. The launch is about 27 miles north of Lovell, Wyoming.

A well-graded road is the path for much of the hike to Barrys Island. The route continues on to a boat-in or hike-in only campground, as well. Chain Canyon is to the left of the hill on the left. 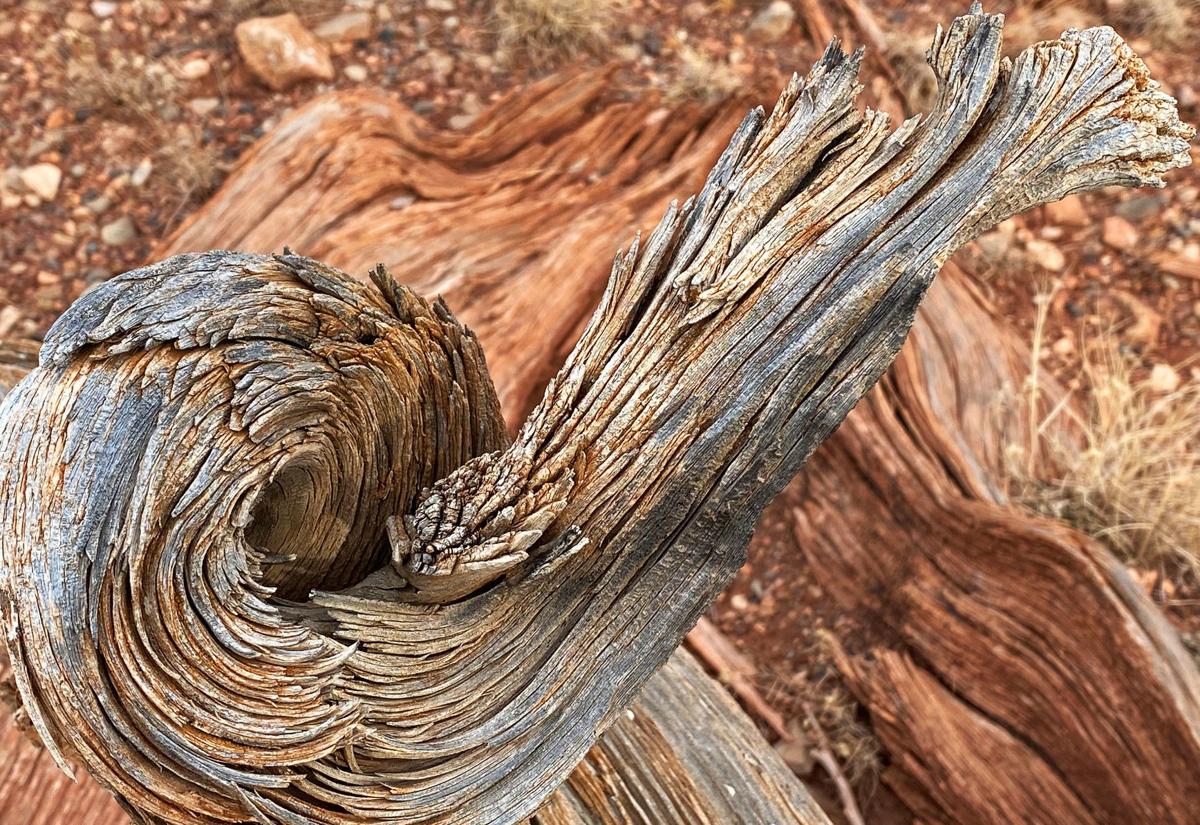 Aged juniper twists and curls, its base stained red by the surrounding clay soils. 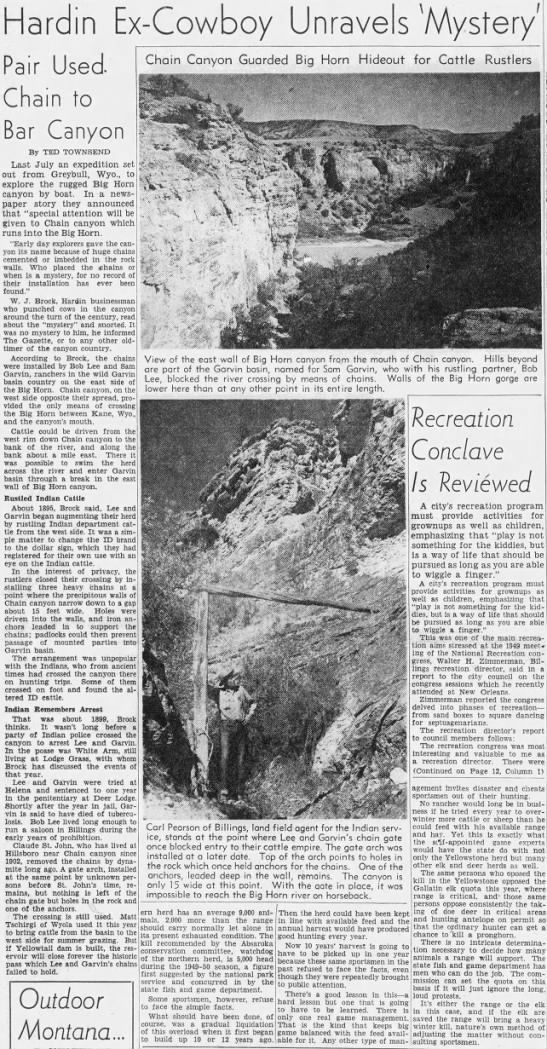 This 1949 story dispels the mystery behind the chains in Chain Canyon. 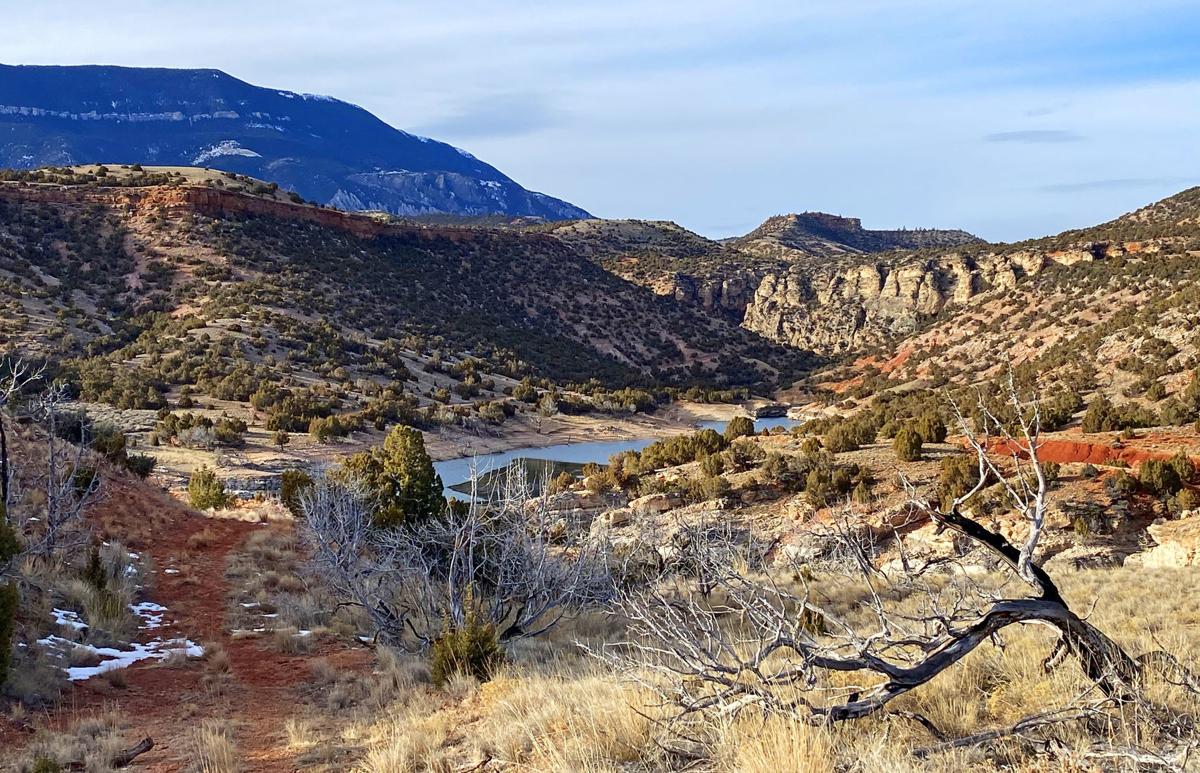 From the north side of Barrys Island this view looks back up Wassin Canyon. 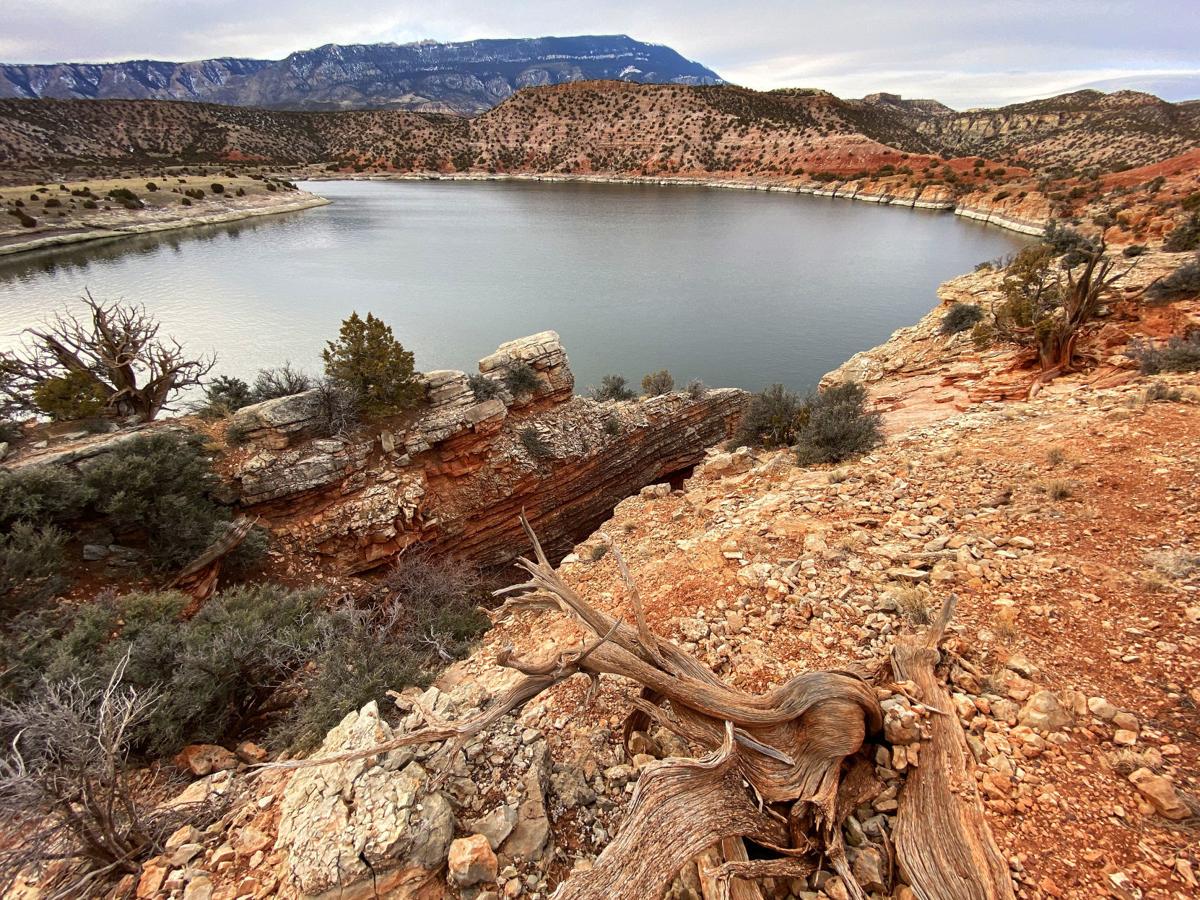 The view from Barry's Island looking west takes in Bighorn Reservoir and the Pryor Mountains in the distance. Chain Canyon is to the left of the hill in the foreground. The four-mile hike around the island is one of several within the Bighorn Canyon National Recreation Area.

Montana in winter is a place of snow and cold, where shivering is considered an acceptable alternative to jazzercise for burning calories.

Yet on a recent January hike into Bighorn Canyon National Recreation Area it was 40 degrees with bright sunshine and no snow.

It seemed as if winter had taken a vacation.

The plan was to rise early for the 122-mile drive south from Billings, but the grip of the holidays’ stupor was still strong, and I overslept. Rather than surrender to the recliner for playoff football, I rallied by drawing upon a caffeine-agitated reserve to pack a lunch and hop in the truck.

The sun shining through the window on the cruise south seemed excuse enough for the trip, tricking my brain into warm memories of spring and summer days past. I shunned sunglasses, preferring to soak up as much of the radiating brightness as possible, even if it meant squinting my eyes down to tiny slits.

The destination for the day was a short jaunt known as Barrys Island Trail, a moderate route that follows a service road for much of the way, meaning a flat, wide pathway. Barrys Island isn’t a true island; instead it is a dew drop-shaped peninsula that narrows down to about 100 yards across. A small, rounded hill tops the island, rising about 300 feet above the trail.

The four-mile jaunt stepped into history, mystery and the warm earth tones of brick red, juniper green and tawny sandstone.

First, the history and mystery. Chain Canyon is the first rocky gorge the trail passes. According to a 1949 Billings Gazette article, the canyon was the main route for two cattle rustlers — Bob Lee (aka Robert E. Lee) and “prominent stockman” Sam Garvin. The two men ranched on the opposite — east — side of the Bighorn River. Back then, no dam backed up the river’s flow, and where Chain Canyon met the river was an easy place to swim cattle to the other side.

To protect their illegal investment, the cattle rustlers drilled holes into the walls of the narrow canyon where they anchored chains that were padlocked to block anyone from stealing the cattle back. Around 1899 the Indian police busted through the gate, inspected the stolen cattle and arrested Garvin and Lee, who were tried, convicted and sent to the state penitentiary in Deer Lodge for a year.

The purpose of the chains was apparently forgotten over the intervening years, as the headline for the article revealed “Hardin Ex-Cowboy Unravels ‘Mystery.’” The ex-cowboy who lifted the veil of secrecy behind the chains was W.J. Brock.

Further research revealed a couple of interesting asides to the 1949 tale. An 1886 article in the Weekly Yellowstone Journal and Live Stock Reporter from Miles City noted that Sam Garvin was “unanimously elected captain of the spring round-up, to serve without compensation” by the stock growers of the Yellowstone round-up association. They were apparently unaware of his nefarious deeds.

In 1898 Bob Lee, who was Garvin’s foreman, was arrested after a dispute with a Wyoming man over the ownership of cattle Garvin had purchased in Sheridan, Wyoming. The argument escalated and Lee “used a six-shooter as a bludgeon and made his mark” on the Wyoming man’s head. Lee was discharged by the justice of the peace on the charge of assault with intent to commit murder.

Angered by the decision, the Wyoming victim rode his horse to nearby Dayton where he “secured a warrant for the rearrrest of Lee on the same charge as before.” Those charges were dropped as well once the new justice of the peace figured out that the victim had embellished his story to acquire the warrant.

There’s no sound of lowing cattle near Chain Canyon or Barrys Island now. In fact the quiet is so deep it seems as if you can hear clear to the Stone Age. Back then — roughly 3.4 million years ago — no humans would have been present in North America. That’s the sense of isolation the canyon can provide in winter, when visitors are few.

It wouldn’t be until 11,000 years or so ago that the first people walked through the land. Then it was a much different place: greener, wetter and home to strange beasts now extinct — the sabre-toothed cat, North American camels and large dire wolves whose fossilized bones litter a nearby cave.

Back then the canyon that now gives the national recreation area its name was likely a bit shallower but still formidable as the river continues to carve its deepening gash between the flanks of the Pryor and Bighorn mountains along the Montana-Wyoming border.

The erosion has revealed a layer of Madison limestone that creates the canyon’s most impressive cliffs, some of which rise 1,000 to 2,000 feet above the narrow reservoir created in the 1960s. Iron oxide in the Amsden and Chugwater formations provides the bright red cliffs and hills that create such a stark contrast to the deep blue of the sky on a clear day.

Old juniper stumps that haunt Barrys Island with their twisted and contorted limbs are stained red by the iron oxide. Other wood worked by the weather resemble bones. Some sedimentary stones also carry impressions and textures resembling rough lizard skin or cracked by lines and smooth as a tan turtle shell.

It’s a great place to take a stroll on a January day, provided winter stays on vacation.

How to get there

Bighorn Canyon National Recreation Area is located south of Billings. To access the south end of the canyon drive to Lovell, Wyoming. A visitor center is located just east of the town and contains information on the canyon's history, geology, wildlife and vegetation.

The drive from Billings is about 122 miles to Barrys Island. Follow the signs, download the hiking guide or pick up a map at the visitor center.

Get outside this winter with these wild hikes