Flipping through a recent issue of the Big Timber Pioneer, I noticed an ad for BBQ Night at Bill’s Place — a remote diner and catering business near Melville that occupies the former Big Sky Corner lunch counter and grocery store between Big Timber and Harlowton.

The business stands in a wide-open, particularly scenic spot on Highway 191, offering an eye-popping view of the white gable-front Melville Lutheran Church, backed by the Crazy Mountains to the west and nothing but sky and the occasional ranch house in all other directions.

“Out here, we’re 20 miles from anything,” laughs Bill Witwer who with his wife Sandy moved to Sweet Grass County six years ago from Kutztown, Pennsylvania, where the two had operated a small mom-and-pop restaurant and catering business since 1998.

The Witwers fell in love with Montana over the course of 10 years when traveling to the area on hunting trips. They decided to move to Melville six years ago and lease the building, owned by the Cremer Ranch, after Linda Westervelt retired and closed Big Sky Corner.

“Being in the middle of nowhere, it’s hard to believe how many people come in,” Bill Witwer said. “We pull folks from Billings, Livingston, Bozeman, Lewistown, Two Dot. Families around here are very supportive. You need that when you have a remote business. We’ve been very fortunate.”

As an MSU student traveling between my family’s home near Lewistown and Bozeman in the early 1990s, I regularly stopped at the log building — which I hear enjoyed a former life as The Old Saloon (Melville’s last bar standing) — for a piece of pie or a cold drink and always got a kick out of seeing old-time ranchers with mud on their boots coming in to get their mail and the young moms who’d meet for coffee after dropping their kids at the school bus stop out front. It seemed like I had entered a time warp.

“It’s still the same,” Sandy Witwer said. “The Post Office is still inside the building, and locals stop in early for breakfast or a homemade cinnamon roll and start to get their day together.”

The diner serves breakfast, lunch and homemade baked goods from 7 a.m. to 2 p.m. Thursday through Saturday and is open from 9 a.m. to 2 p.m. on Sunday. (They always close in January and February, opening for spring sometime in March, and in 2017 they also closed in December.)

Breakfasts range from ribeye steak and eggs and biscuits with sausage gravy to pancakes, French toast and omelettes. Lunches include hot and cold sandwiches, burgers, salads, homemade soups and “usual” sides like French fries and onion rings mixed with a couple surprises like cheese curds or fried green beans.

“A lot of different groups hold meetings here — ranchers, Stock Growers, anybody who needs to. We’ve got coffee if they want to make it. They help themselves and just let us know what they ended up using," said Bill Witwer, who loves to cook and was a baker in the Navy from 1977 to 1981. His family had a clam business back east, which his cousin still owns. (This might explain Bill’s expertise with crab cakes and seafood bisque, both of which are highly coveted items on the Mother’s Day Brunch buffet table.)

The diner’s day-to-day atmosphere is relaxed and friendly, but on BBQ nights and steak nights — which the Witwers try to do one Saturday night per month between March and December if they’re not booked catering — the place is jumping. Bill’s slingin’ it in the kitchen while Sandy and their daughter Santene Peoples — who lives in Big Timber and works at Big T IGA — work the floor. Santene also runs the cash register.

“People start to trickle in at 5 o’clock,” said Bill, who offers a limited menu on BBQ Nights. He liberally applies his mouth-watering, vinegar-based BBQ sauce, which is sweet with a bit of a bite to it, to chicken halves ($13 with two sides), St. Louis-style rib dinners (half rack $15; full rack $25 — each with two sides), smoked pork sandwiches ($8), beef brisket ($10) and prime rib sandwiches ($13).

“Our portions are large. In fact, they’re too big,” Bill said with a smile. “You’re never going to leave this place hungry.”

Sides include baked beans, macaroni salad and coleslaw ($3 each). French fries are $3.50, and their popular baked potatoes stuffed with pork or brisket with onions and melted cheese and sour cream are $6.50.

The Witwers also sell a lot of brisket to go — in 1-pound increments.

“People can eat a meal here any time, not just on BBQ nights, and ask for fresh or frozen brisket to go,” Bill said. “They stop in from all over the state. We’ll pack 1 pound, 10 pounds — whatever they want. They put it in their ice chest, and off they go.”

The diner’s Easter and Mother’s Day buffets pull in more than 200 diners from around the state.

“We get people from age 2 to 90 from all walks of life,” Sandy said. “A lot of big groups and families.”

Local baker Diana Hanson, who makes most of the diner’s homemade pies, cakes and cinnamon rolls, brings in ten different desserts for the buffets. “People will ask, ‘Which desserts did Diana make?’ and they’ll point to things and try to guess," Sandy said. “They’ll say, ‘Oh, I bet Bill made this one ... and Diana had to make that.’ They have a lot of fun trying to figure it out.”

For the past few years, they’ve also taken their food truck to Red Ants Pants, the popular music festival near White Sulphur Springs that hand-picks vendors to feed its crowd of more than 15,000 each July.

They also cater rodeos and smaller events like shearing lunches, brandings and shipping parties. “We’re in the day and age where wives are working the ranch too. Many don’t have time to be in the kitchen putting a big meal together,” Sandy said. The Witwers set up on-location or do in-house events for 15-45 people as well.

Even if they’re closed and somebody calls and wants to bring in 10 guys or a branding in, they’ll open up, Sandy said. “We’re pretty lenient here. We only live a mile away. All of our local customers know … if we’re around, we’re available.”

Montana-based photojournalist Lynn Donaldson-Vermillion shoots and writes for Travel + Leisure, FoodNetwork.com, is an official Instagrammer for National Geographic Traveler, and contributes regularly to the New York Times. She is founder and Creative Director of the Montana food and travel blog, TheLastBestPlates.com.

Serving breakfast and lunch, plus Easter and Mother’s Day brunch, and either BBQ Night or Steak Night one Saturday a month when they can.

They close annually in January and February but reopen sometime in March. In 2017 they also closed in December.

The last best plates at some of Montana's local eateries

One of my favorite things about traveling is discovering unexpected treasures. I love driving down a small town’s main drag — in this case, Ce…

Festive vibes of Friday resounded at Lilac. On this night, Suzi Reitz and I celebrated our friend Sharon Forman’s birthday. Chatter and conver…

For a taste of Indian or Tanzanian cuisine, look no further than Saibeen’s Kitchen in Great Falls

It’s a long and expensive plane ride to India or Tanzania. But if you want a taste of either country through their cuisine, look no further than Saibeen’s Kitchen in downtown Great Falls.

Posh Chocolat eggs are an Easter tradition for many Missoula families

There’s something “theatrical” that I can’t quite pinpoint about Posh Chocolat’s retail kiosk in downtown Missoula.

As the fate of Herberger’s hinges on whether its parent company Bon-Ton Stores Inc. will be sold to a liquidator, communities across Montana h…

Great Falls man charged in shooting he says was self-defense

GREAT FALLS — A Great Falls man is charged with attempted deliberate homicide for an April 8 shooting that he initially reported was done in self-defense.

An unusually virulent strain of E. coli bacteria on romaine lettuce has sent 31 people to hospitals in 16 states, including Montana, and health officials are urging consumers to throw out any of the lettuce they may have bought recently.

Bozeman Health to lose $2.6M due to state budget cuts

BOZEMAN — Officials with Bozeman Health say they expect to see a $2.6 million drop in revenue this year due to state cuts in Medicaid reimbursement rates.

One of the perks of living in Montana is not having to depend on public transportation — that is, until you want an adventure that can only co…

While standing in a small pine forest off West Main Street in Bozeman, soft wet snow pelted down from the skies as winter edged into spring. I…

Family Fort Peck getaway is made complete with fishing, boating and campfire cooking

Nothing kicks off spring in Big Sky country like a road trip to eastern Montana. Back in the day — before marriage and kids — I wouldn’t think…

Carter’s Brewery in Billings is in the running for the most innovative and adventurous brewery in the state. Though it’s nearly impossible to …

Dandelion greens, rosehips and sage. These ingredients take us home to Montana, under the Big Sky. Through an indigenous lens, Chef Sean Sherm…

Jimmy Buffet was wrong when he said Ringling was “a dyin’ little town.”  In fact, the Ringling Bar has become a go-to place not only for local… 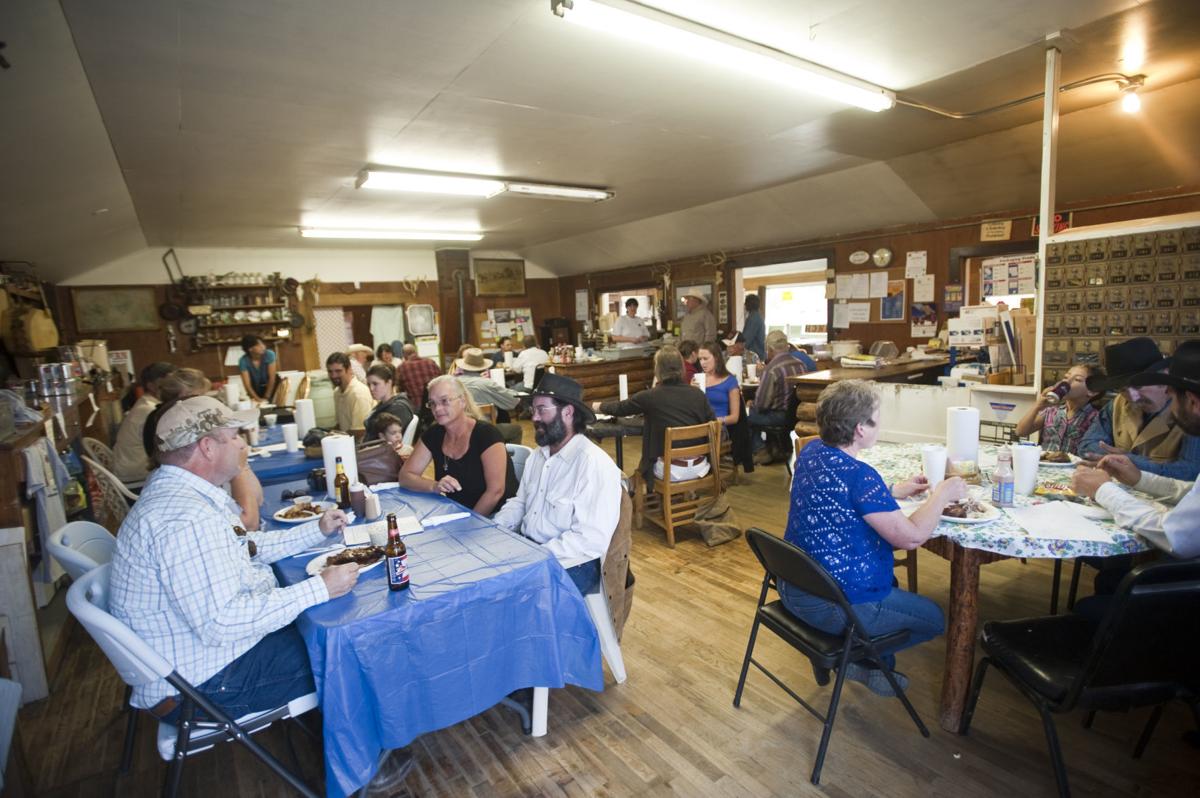 The dining room is packed during special events like BBQ Night. Seated at the blue table in the foreground are Matt Cremer, left, of Melville, talking with Penny and Mark Patton. Standing in the distance at the end of the table wearing blue is Melville resident Melissa Anderson, who often helps the Witwers during special events. Sandy Witwer can be spotted standing behind the counter at the cash register. 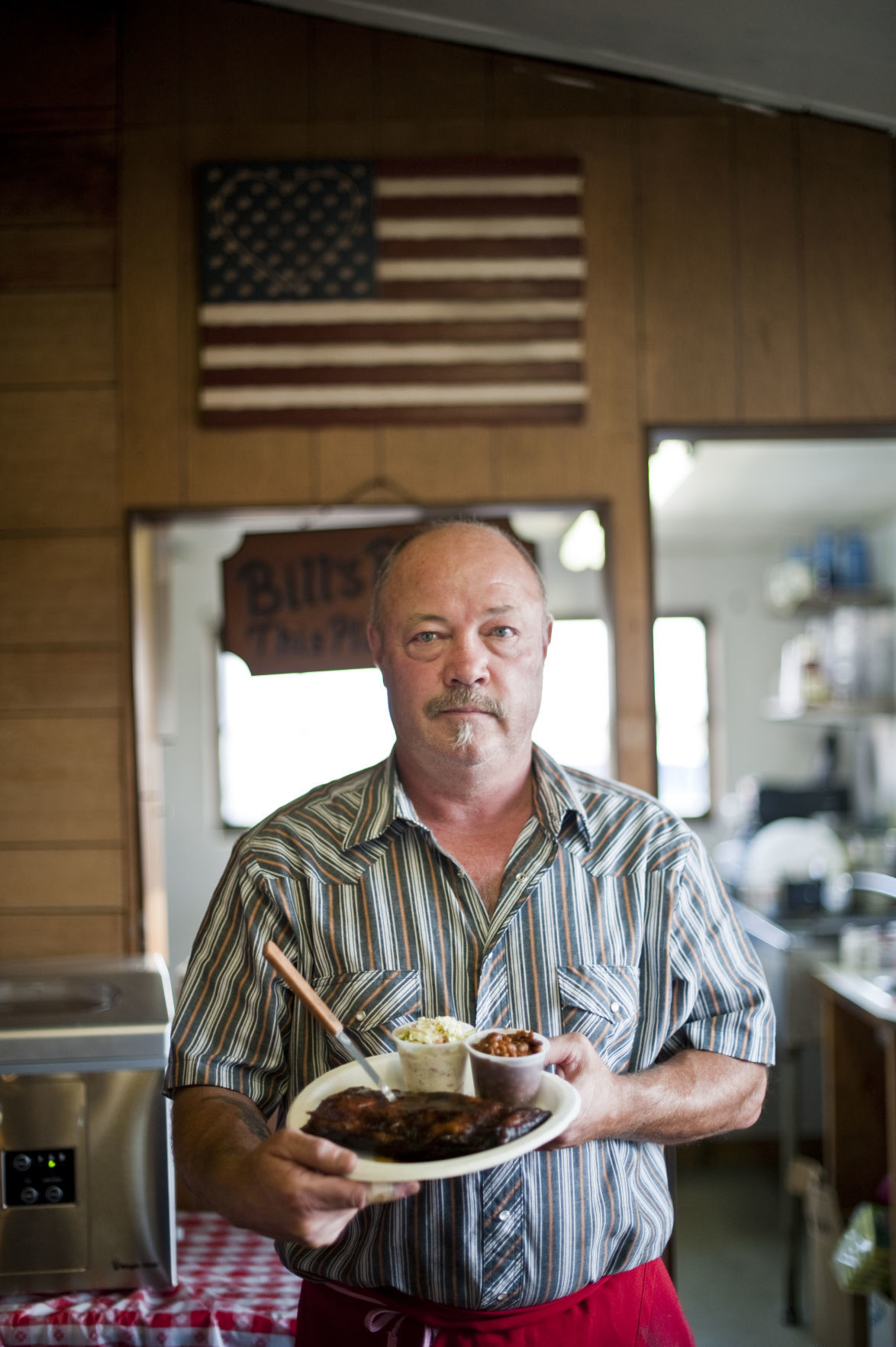 Bill Witwer, who owns Bill's Place Diner and Catering with his wife Sandy in Melville, is shown in the front of the house with his kitchen visible behind him. 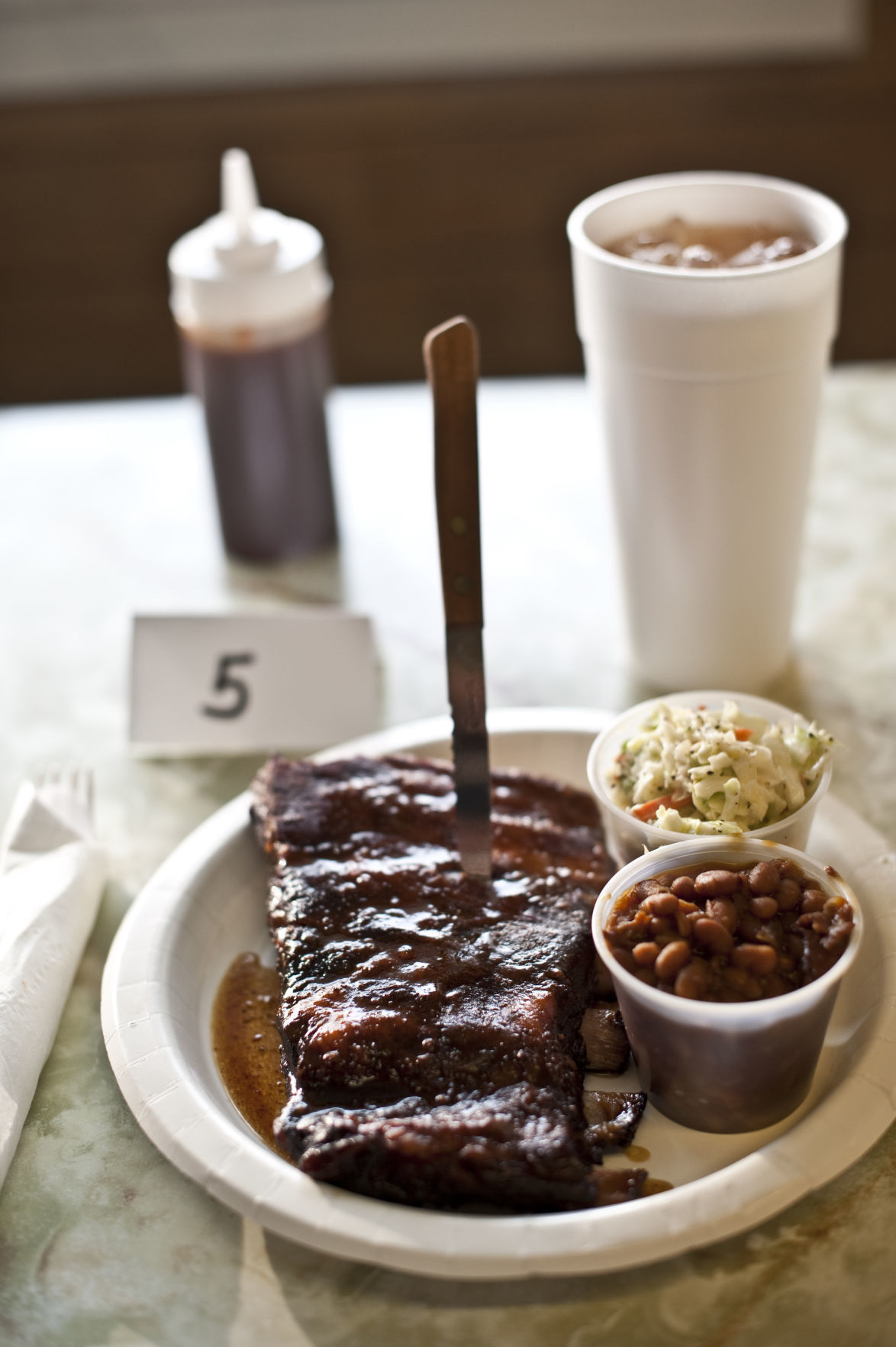 A $13 half rack of of ribs comes with two sides, including cole slaw, baked beans (pictured here) and macaroani salad. French Fries are available for $3.50, as is a Baked Potato stuffed with either pork or brisket with onions, melted cheese and sour cream ($6.50). 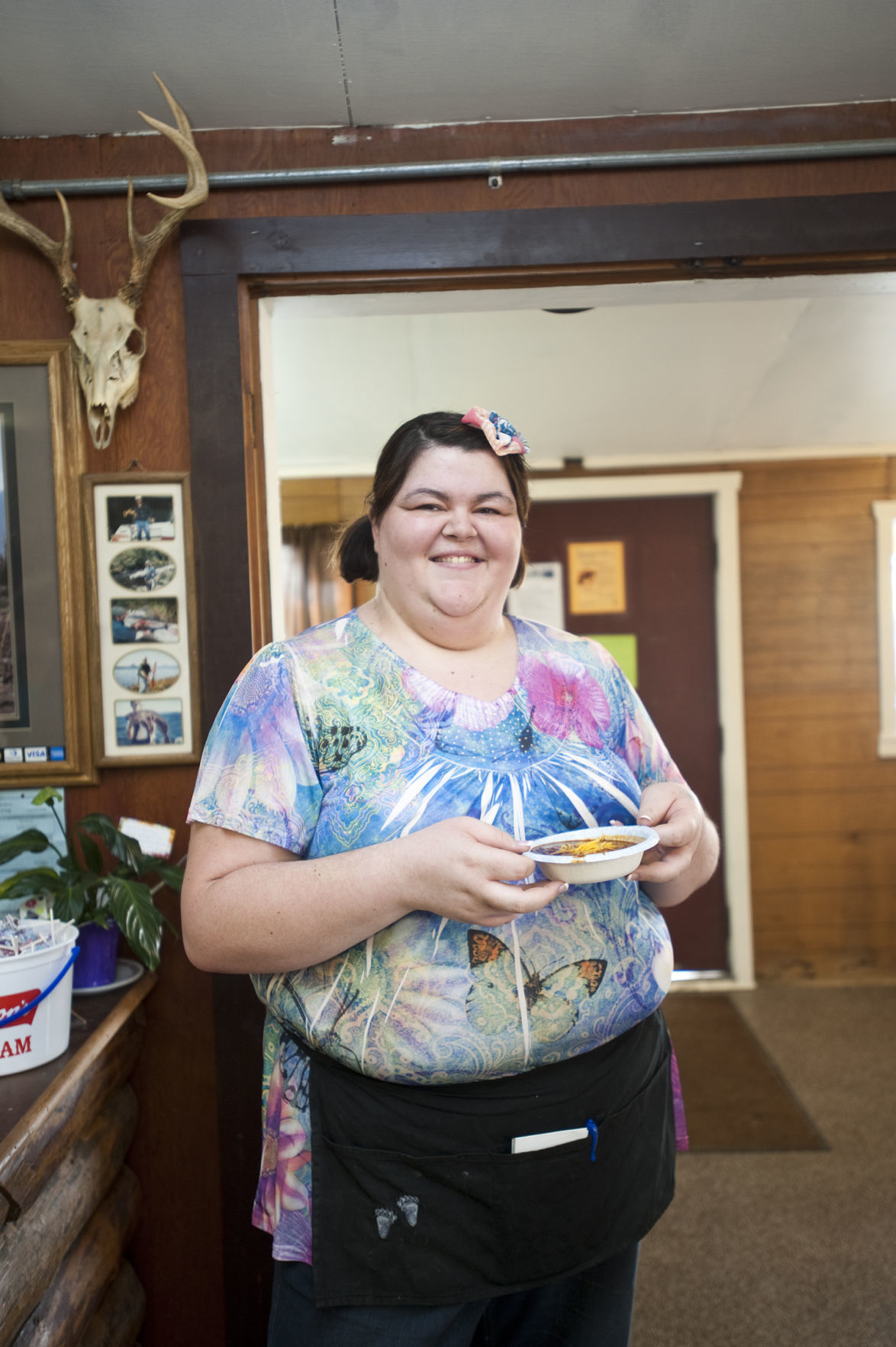 Bill and Sandy's daughter Santene Peoples works at Big T IGA but helps her parents out as much as she can — especially with special events. She waits tables and also helps run the cash register. 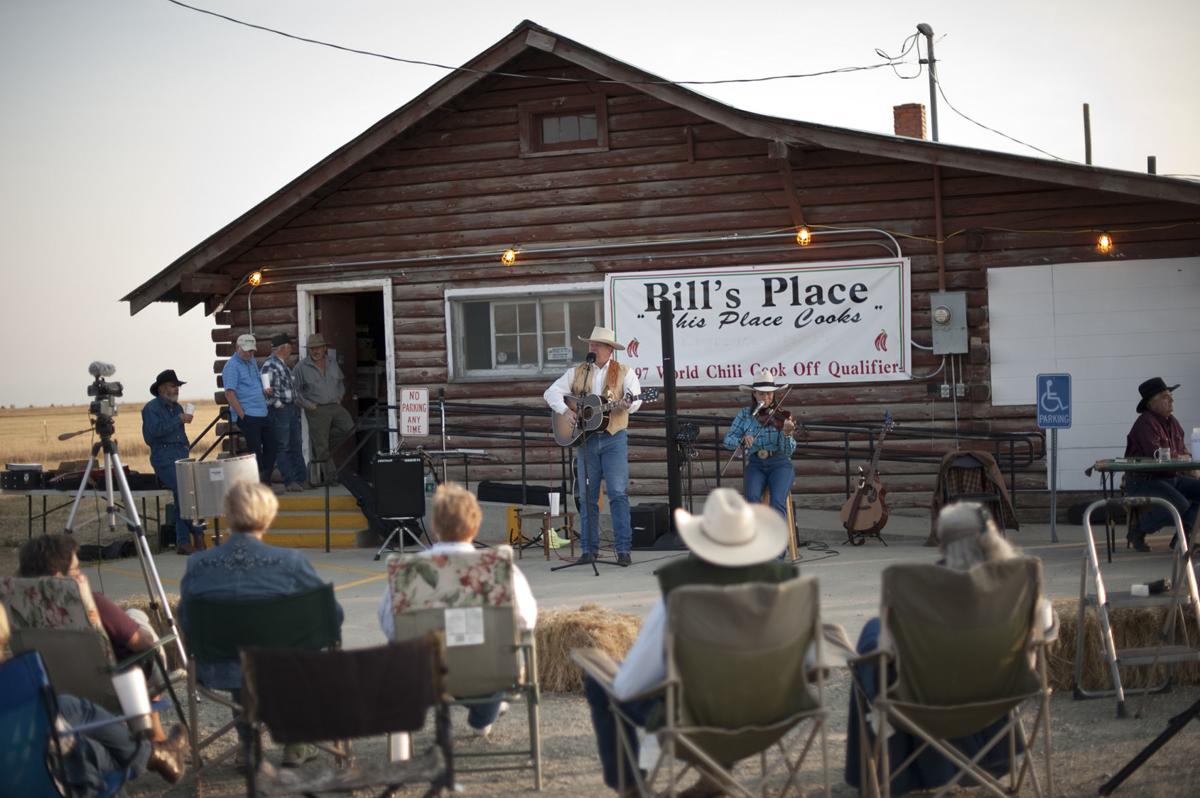 Music is a big part of BBQ Night and Steak Night. Local Melville resident Duane Tronrud helps the Witwers out by organizing it and setting up the equipment. The style is usually old-time country. Sometimes Tronrud brings a musician in, but the mic is always open for anyone who wants to step up and play or sing. Straw bales serve as benches, and locals bring lawn chairs and blankets. "They'll play til 9, 10 o'clock," Bill Witwer said. "As long as people are sitting there listening to 'em, they'll play."  Pictured here, CT Hurley, left, plays guitar and sings accompanied by a fiddle player (identity unknown). 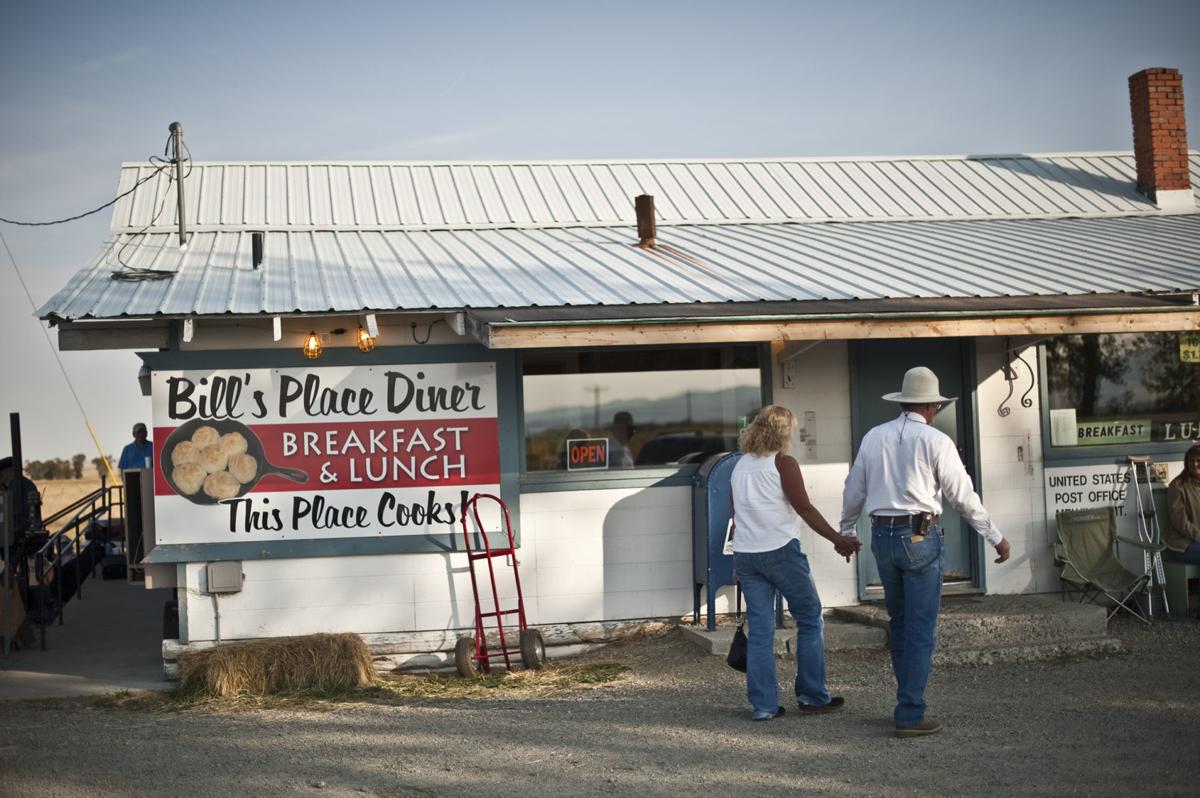 A local couple heads inside to look for a table. 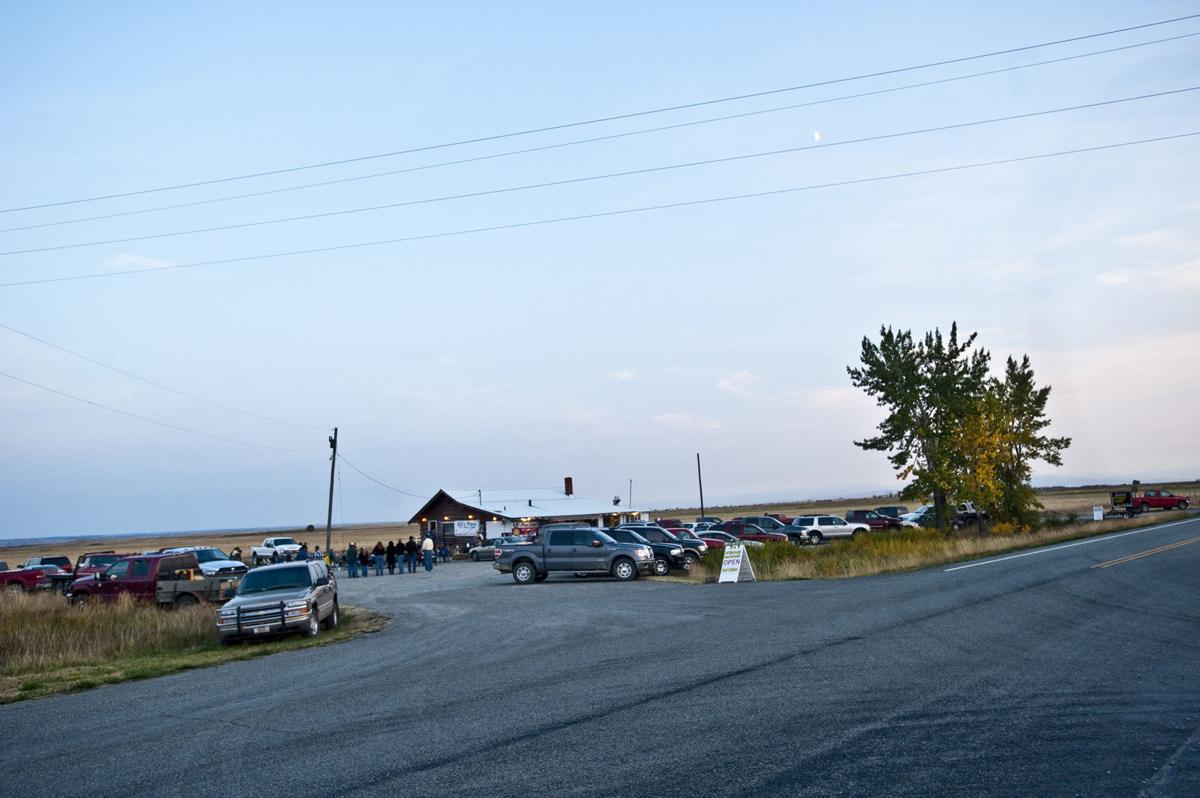 The parking lot is full for a BBQ Night featuring live music. 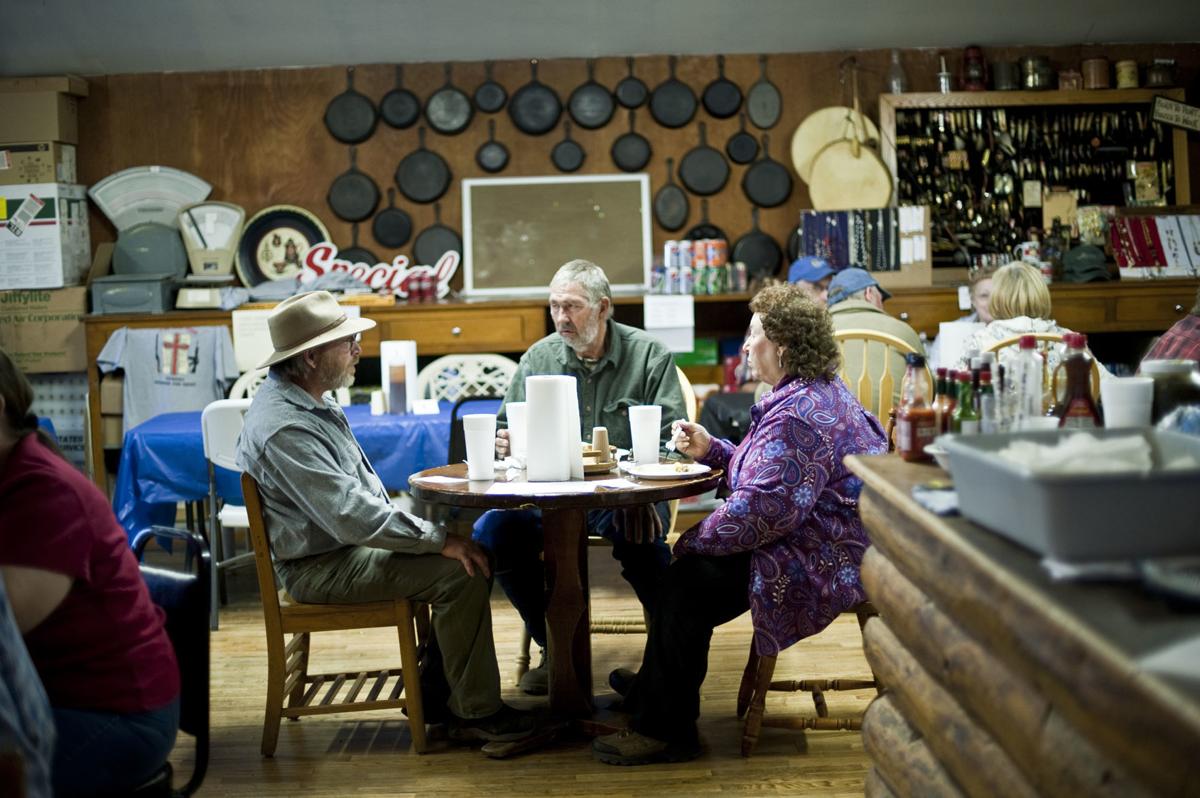 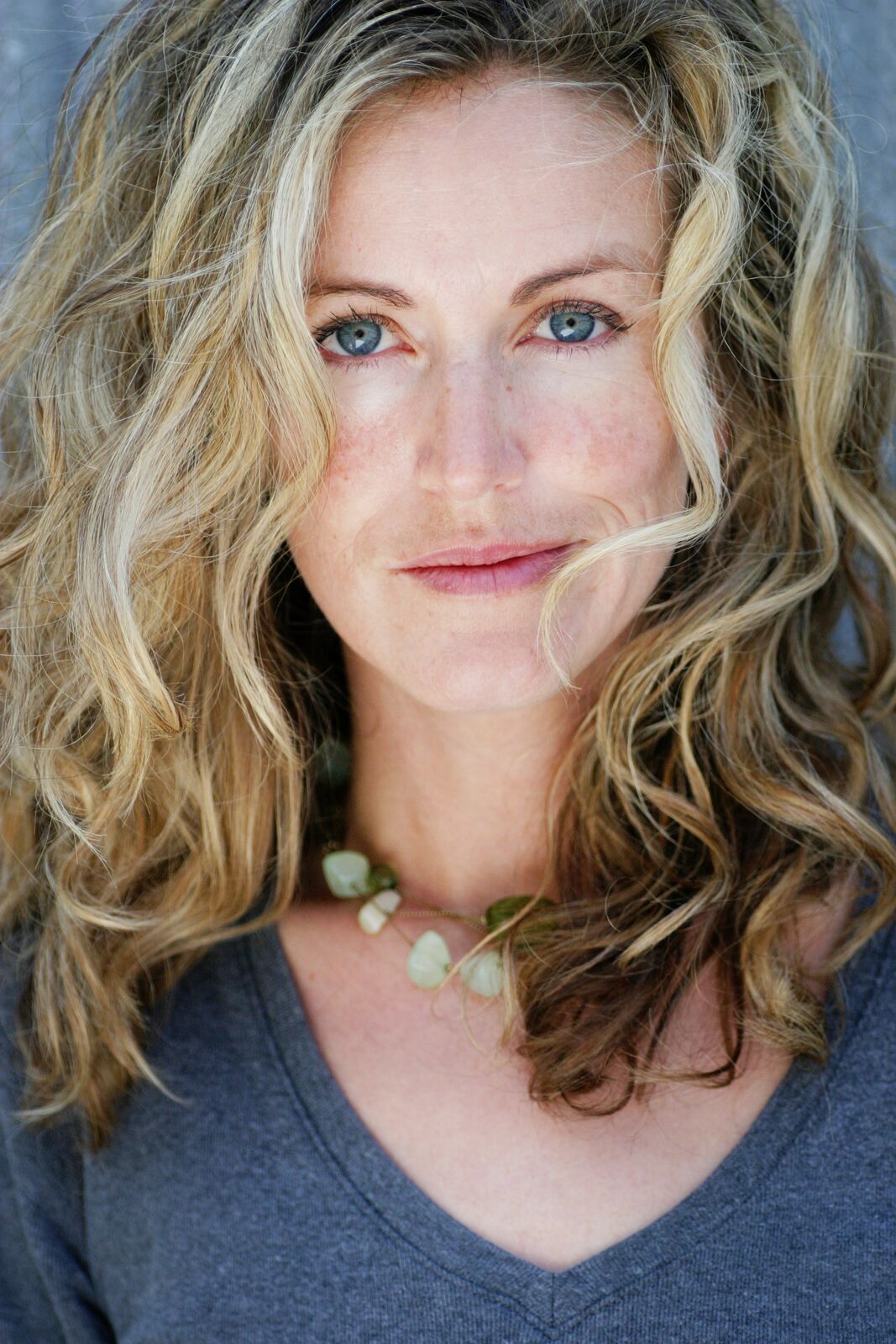